14/06/2019 - François-Xavier Branthôme - Lire en français
...but signs of recovery in the early months of 2019 have made that slowdown difficult to interpret

After four years of uninterrupted growth, which took export volumes beyond 125 000 metric tonnes of finished products in 2017, Chilean exports of pastes recorded a clear slowdown in 2018 (January-December) of approximately 7% compared to the average of the three previous years (2015-2017), bringing final results down to approximately 111 600 mT.
This drop in volumes was paralleled by a notable drop in financial turnover, mainly linked to a marked decrease in the value of the products exported. Last year, the value of Chilean exports of tomato paste amounted to slightly less than USD 96 million, compared to slightly more than USD 111 million in 2017 and USD 116 million on average for the period running 2015-2017. This level of turnover is one of the worst performances of the past twelve years for the Chilean industry in terms of the value of its raw materials absorbed by exports. 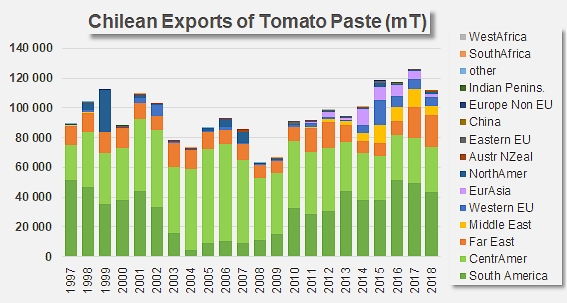 Three main regions play an important role in focusing Chile's export activities mostly on continental destinations. Chilean pastes are indeed mostly exported to the markets of South America (Argentina, Brazil, Uruguay, Peru, etc.) and Central America (Colombia, Venezuela, Ecuador, Guatemala, etc.), absorbing on average 78 500 mT over the past three years, which amounts to exactly two-thirds of Chile's processed tomato trade flow. The Far East is also an important market for Chilean operators, as it bought up approximately 17 000 mT per year over the same period, which is slightly less than 14% of Chile's paste exports.

Chile's 2018 results for foreign trade in these three regions increased slightly overall, compared to the average results of the three previous years, yet it nonetheless remained unconvincing due to a notable drop of 6% in exports to South America caused by a marked slowdown in purchases from Argentina, Brazil and Uruguay. Trade with Central America remained merely stable (-0.1%), masking big variations in the results achieved on the various national markets (notable increases in Colombia, Ecuador and Mexico, but sharp decreases in Venezuela and Guatemala), while net growth was recorded for foreign sales to the Far East, driven by increasing purchases from Japan, Thailand and South Korea.
Over the same period (2018 vs. 2015-2017), results sharply deteriorated in three other regions (Middle East, European Union and Eurasia) that had contributed strongly to the increase in Chile's foreign sales. Total volumes exported last year towards these three regions (approximately 14 500 mT, notably to Saudi Arabia, the Netherlands, Germany and Russia) only accounted for slightly more than half of the average annual volumes of the three previous years.

In total, two-thirds of the paste exported by the Chilean industry in 2018 was shipped to the South American continent. However, although this proportion is indeed indicative of the importance of neighboring markets over the past four or five years, it is important to note that these destinations "weigh" less and less in Chile's foreign operations, as the country aims to develop the advantages offered by counter-seasonal cultivation and competitive products in order to develop its sales to the Far East, the Middle East, the European Union, Eurasia, etc.

Furthermore, figures for the first months of 2019 seem to indicate a consolidation of the country's exports trade: in the first three-month period, the volume of paste exported (close on 27 000 mT) increased by 25% compared to results for the same period in 2018 (January-March), with growth reaching 21% over the six-month period from October 2018 to March 2019. If this dynamic is confirmed in coming months, it will be necessary to consider 2018 as an adjustment period: in any case, the first nine months of the marketing year 2018/2019 allowed the Chilean industry to export about 93 000 mT of tomato paste. In this context, a possible total of more than 120 000 mT of exports remains a realistic target. 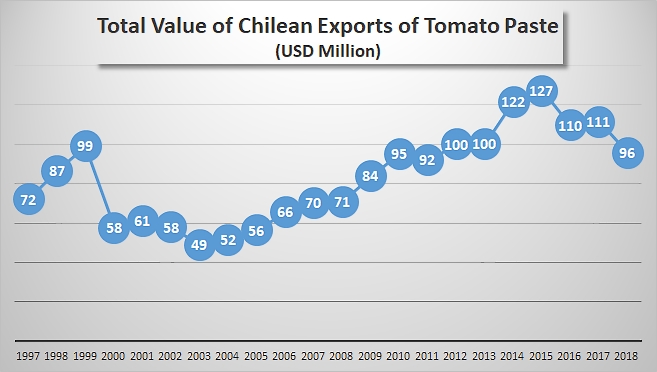 Some complementary data
Evolution of the CLP/USD exchange rate over the past eighteen months. Over the past twelve months, the Chilean currency has lost exactly 10% of its value against the US dollar. 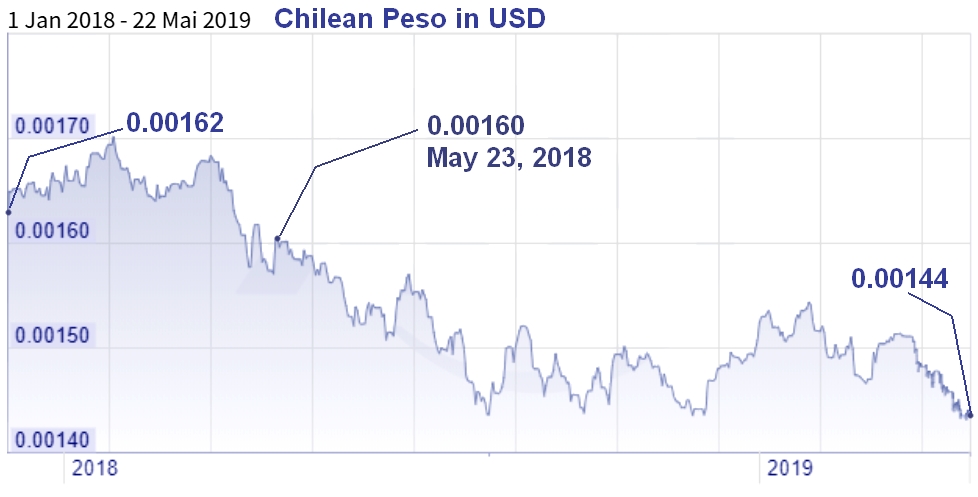 Evolution of Chilean paste exports towards the main markets within geographical proximity: the volumes exported have not varied much in recent years, staying close to an average of approximately 75 000 mT. 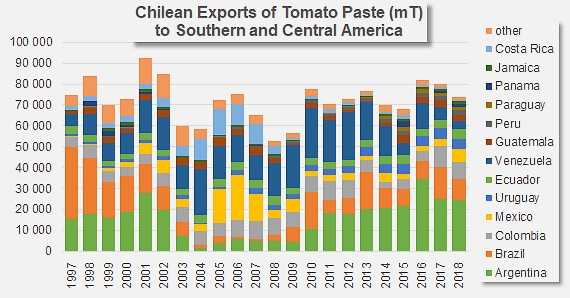 Evolution and contribution of the different quality segments within the total results recorded for Chilean paste exports. 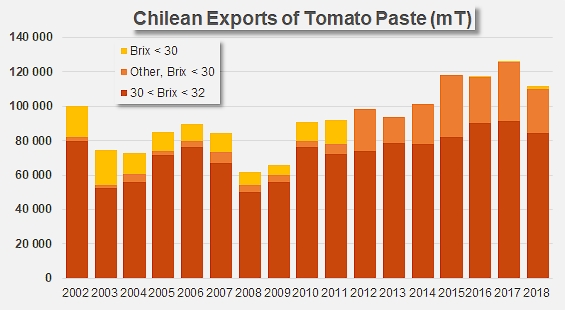