24/04/2020 - François-Xavier Branthôme - 2020 WPTC congress
This dossier is one of the articles which were originally to be published in the "Processed Tomatoes 2020 Yearbook", which all attendees in the World Congress of Processing Tomatoes would have received free of charge upon their arrival in San Juan, Argentina.

Argentina’s trade balance
Consumer demand has slightly increased in Argentina, with a total volume of about 630 000 tonnes of fresh tomato equivalent absorbed by the domestic market in 2019.
Argentina's trade balance in the industrial tomato products segment has been running a chronic deficit for many years, which the national industry and the Tomate 2000 Association have endeavored to reduce by promoting operations and performance in order to reach self-sufficiency as fast as possible and do away with foreign supply requirements.
According to INDEC data, exports from January to December 2018 totaled 9 745 mT of finished products (all categories combined) for a value of USD 7.8 million. A similar value ended the year 2017, for a total exported volume of 7 789 mT. At the same time, imports over the same twelve-month period involved 37 442 mT of finished products, for a total invoice of USD 33.4 million, while the supplies for the year 2017 had cost USD 35.8 million for a total tonnage of 44 883 mT. The quantities imported in 2018 were around 7 500 mT lower than in 2017, for a reduction in value of around 2.4 million USD. To use the terms of the INTA 2018/2019 report, this improvement was made possible by a "better supply of national raw materials during the 2017-18 season". 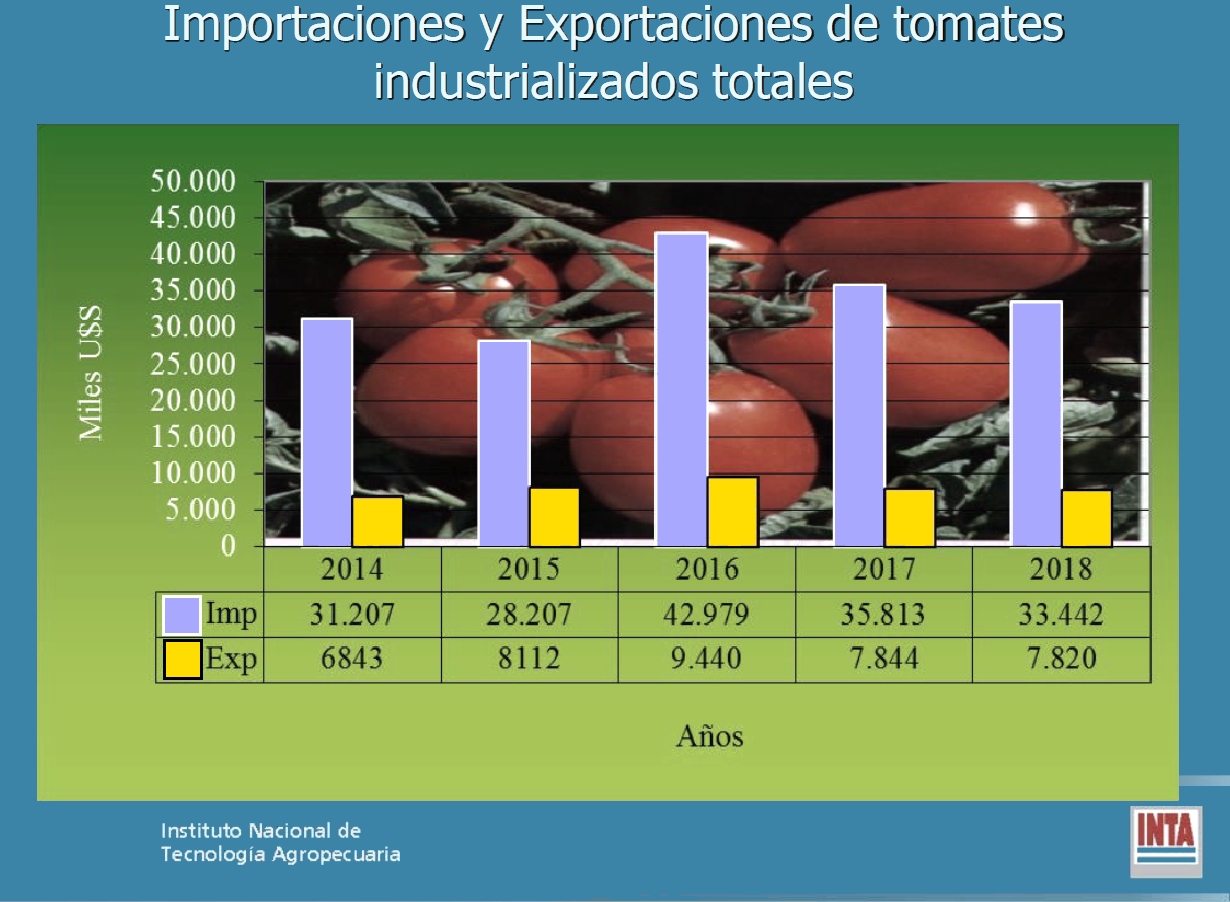 According to INTA, the proportion not covered by national production during the last 2018-2019 season represents a large third of domestic demand, and amounted to around 235 000 mT of fresh tomato equivalent. Satisfying demand required the importing of around 25 000 mT of 30-32°Brix tomato pastes, but it could have been covered by production from 2 900 additional hectares of crops (with average yields of 75 mT/ha as is the case in the Cuyo region). 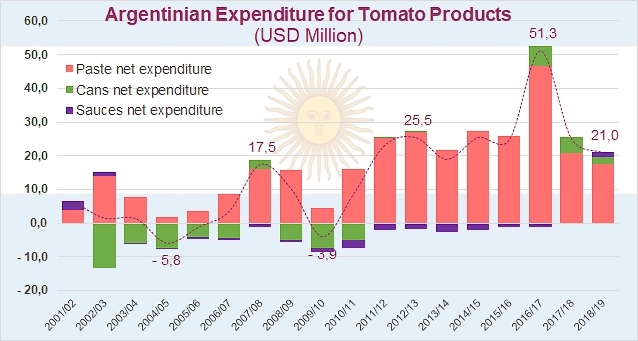 According to the latest figures for the marketing year 2018/2019, the Argentinian trade balance confirmed its chronic deficit for all product sectors, and more particularly for pastes, for which net imports amounted to 17 000 mT in 2018/2019 and almost 29 000 mT over the past three years. Tomato pastes are mainly imported from Chile as raw material to be remanufactured into puree, which is the main product sold on the local market.
The canning sector supplied a few thousand tonnes for exports over the period 2002-2010 but has remained in deficit since that date, with net imports of around 2 800 mT last year and almost 7 000 mT on average over the last three marketing years.
The export market is small and consists mainly of finished products sent to Mercosur countries such as Paraguay, Uruguay, Bolivia and Brazil. Only the sauces sector, to a modest extent, maintained a positive result in terms of the trade balance over the period running 2003-2018 (around 900 mT on average). However, in 2018/2019, for the first time in a long period, Argentina imported 300 mT more sauces than it exported.

With regard to the entire sector of processed tomato products, the Argentinian trade balance has not recorded any significant surplus over the past twenty years. In 2018/2019, supplies of processed tomatoes (mainly tomato paste) cost Argentina just over USD 19 million. Over the past three years, the total "invoice" has averaged nearly USD 29 million.
Yearly per capita consumption is approximately 14 kg, with an annual growth rate of 3 to 4%. The consumption of sauces (18.3%) has increased both on the local market and on the export market.

Some additional data concerning the Argentinean industry and its characteristics

Evolution of average Argentinian national yields over the past ten seasons 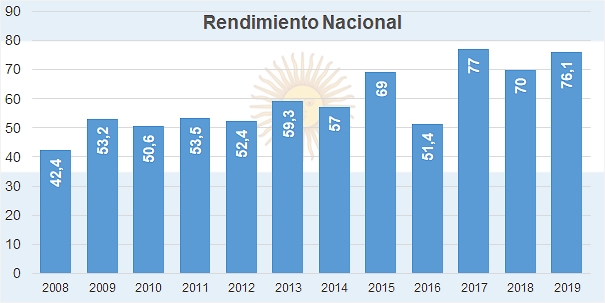 At the end of the previous campaign, operators of the Argentinian industry hoped that the surfaces available for cultivating processing tomatoes in 2020 would be sufficient to meet the increase in processed quantities being programmed by certain factories which have, in addition, decided to improve the prices granted for the raw material grown in Argentina and take account of exchange rates in their agro-industrial approach. 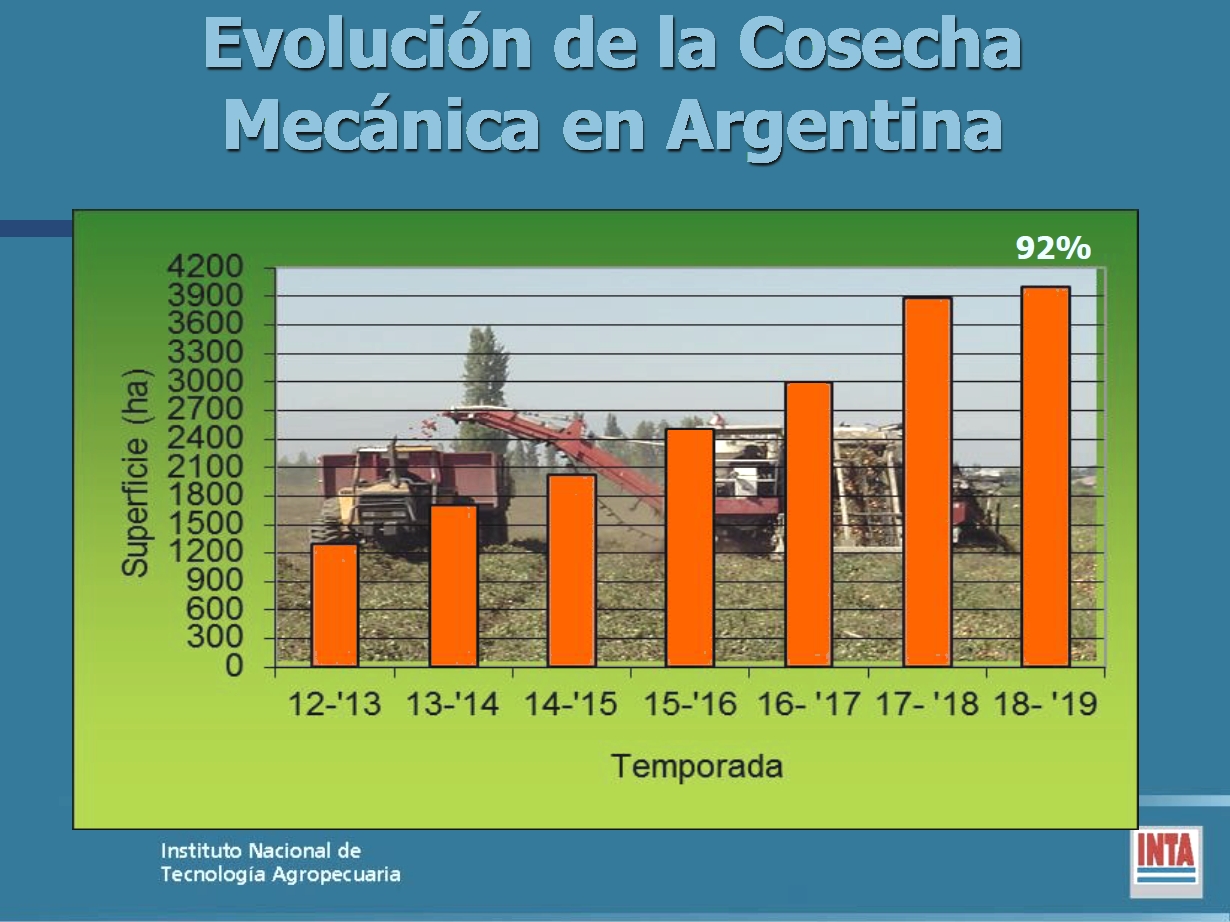 The four main tomato-growing regions in Argentina are the North-West, la Rioja, Rio Negro and Cuyo. 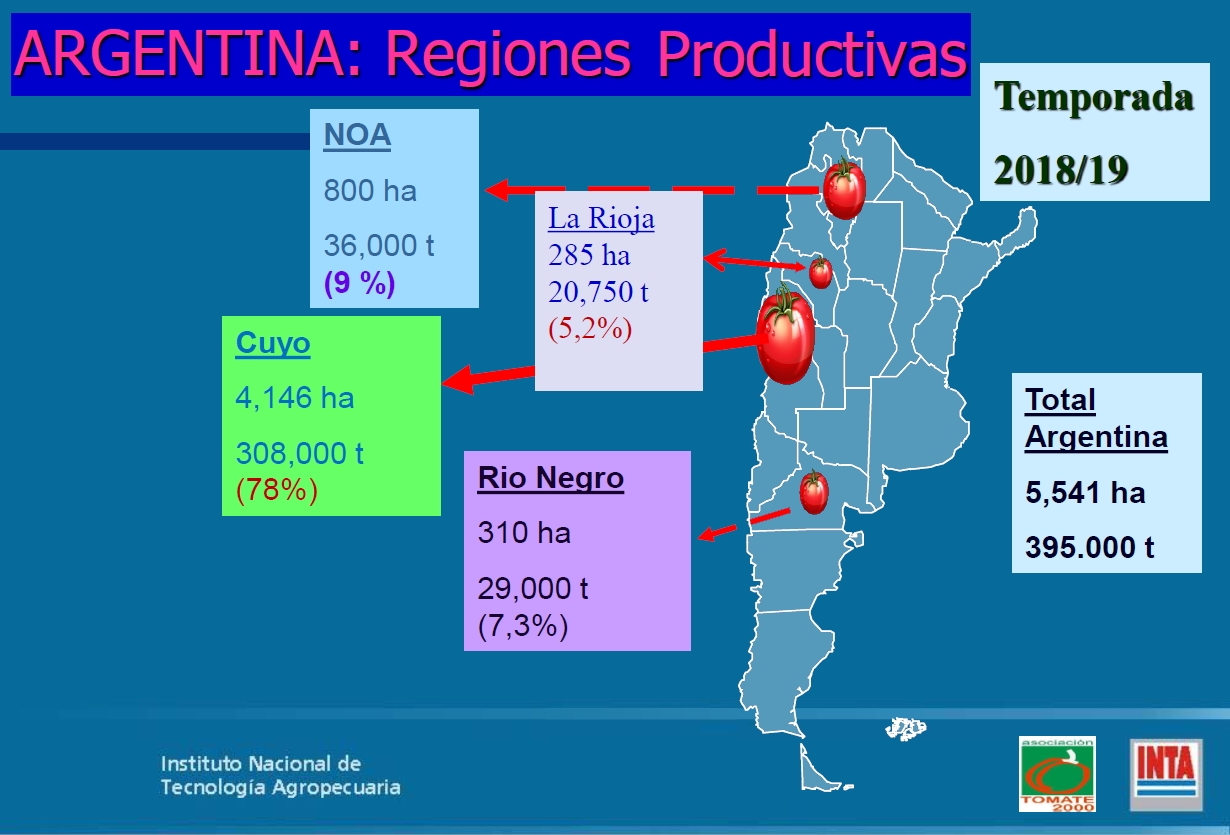 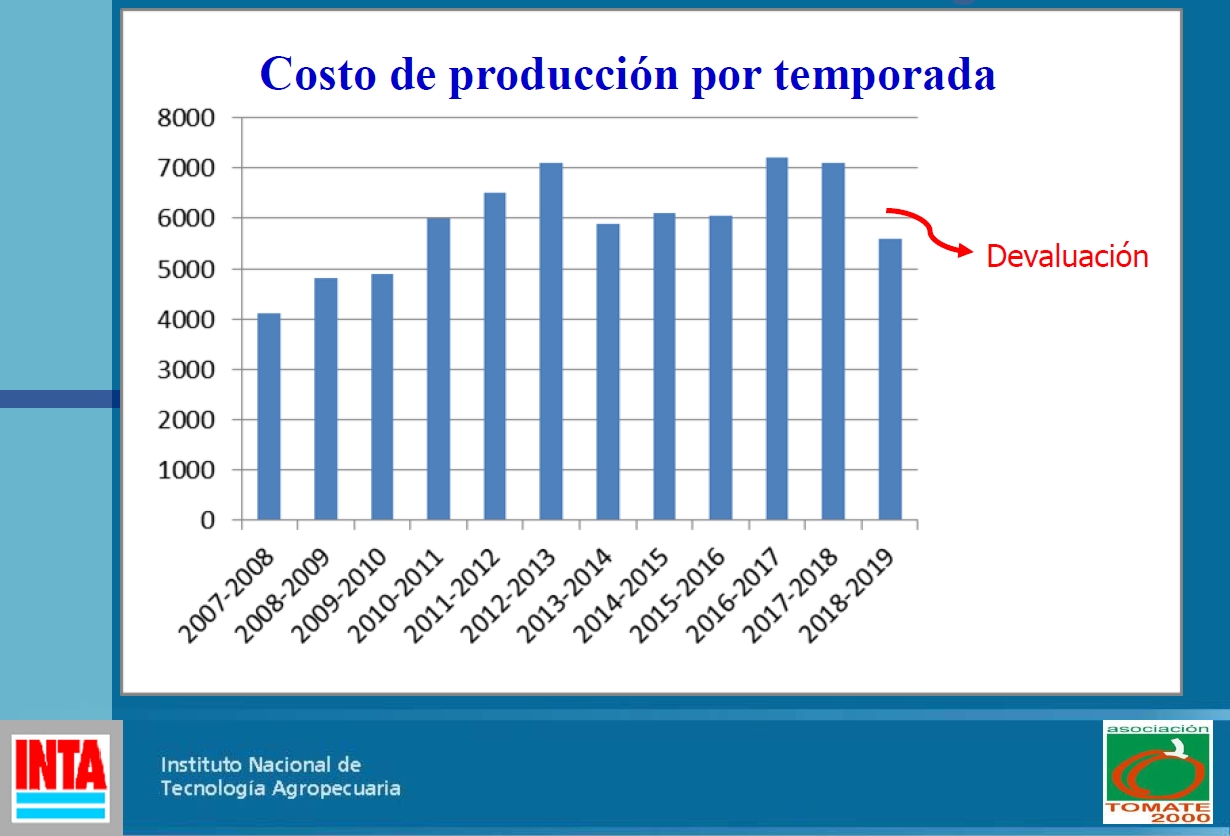 In 2018/2019, the Association continued, for the tenth consecutive year, the evaluation of drip irrigation projects with its growers. This part of the Association's missions, carried out by Program monitoring of growers, is an important topic, since average yields of 89.1 mT/ha were obtained in 2019, compared to 88.6 mT/ha during the previous season. The area using drip irrigation covered 72% of the surfaces monitored by the Association, against 80% in 2017-2018. 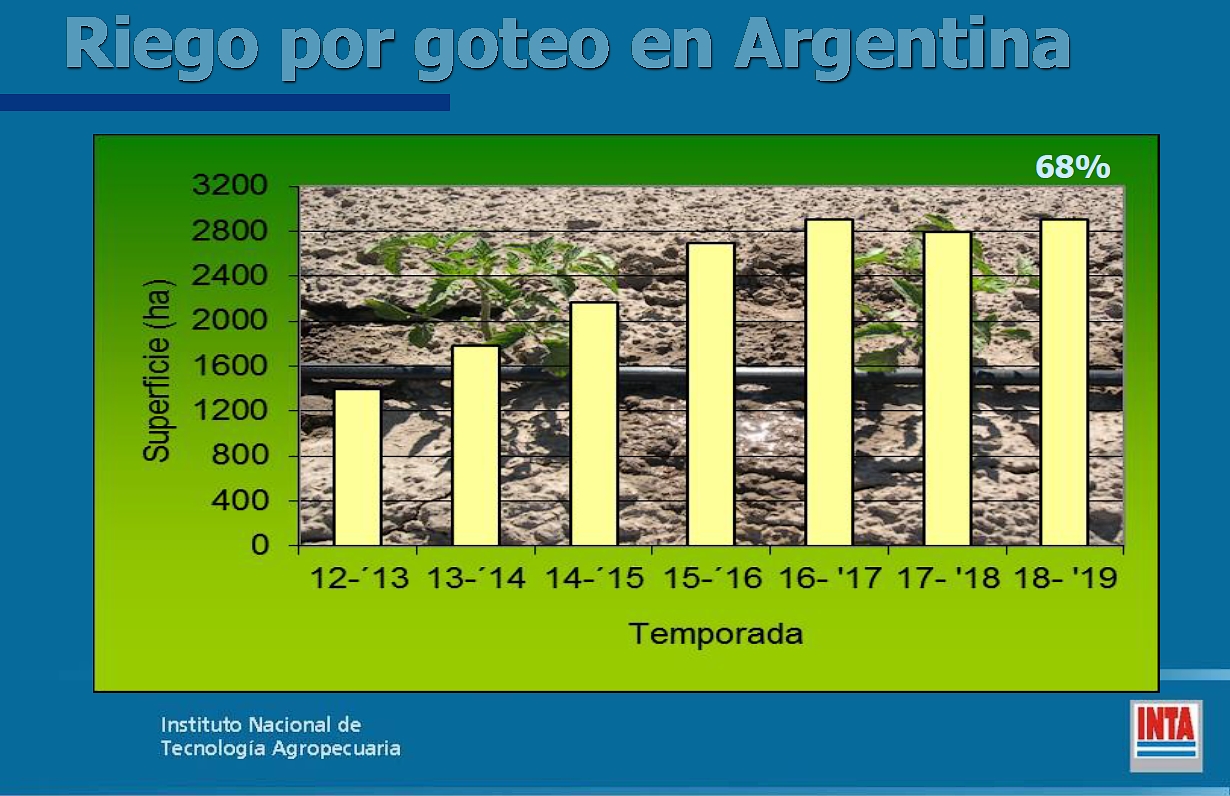 Over the past few seasons, the industry has increasingly preferred late varieties to semi-early or early varieties. Out of just under 94 million plants, late varieties (HM 7883, Fokker, HM 1892, H 1307, N 6404, to name only the main ones) covered 98% of crop needs. Semi-early varieties, such as Star 9063, Franco or Docet) only represented around 2% of plantations. 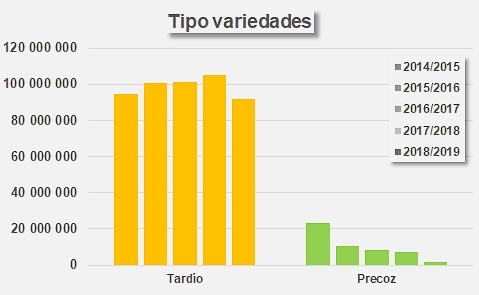 To find out more about the Argentinian industry and other aspects of the work accomplished by the Tomate 2000 Association, we invite you to consult the related articles published since January 2019 on the Tomato News website (see links below), as well as the attached documents presented at the end of this report.