23/04/2020 - François-Xavier Branthôme - 2020 WPTC congress
This dossier is one of the articles which were originally to be published in the "Processed Tomatoes 2020 Yearbook", which all attendees in the World Congress of Processing Tomatoes would have received free of charge upon their arrival in San Juan, Argentina.

Over the last five years, Argentina's annual production of processing tomatoes has averaged 450 000 tonnes. Over this period of time, such levels of operations position Argentina in 14th place among tomato processing countries, behind Algeria and ahead of Canada.
In Argentina, the main harvest period stretches from 20 November to 30 May, starting in the North-west of the country (Salta and Jujuy provinces) and finishing in the region of San Juan, after a second crop. Most of the industry (more than 75% of total volumes over the past three years) is located in the Cuyo region (Mendoza and San Juan provinces).
The use of transplants has been totally adopted. In 2018, hybrids accounted for 100% of the acreage and mechanical harvesting was used for 83% of that total (against 78% in 2017 and 50% in 2016). Processors provide financial support for growers, covering half of their direct expenses including harvesting. Growers who belong to the Tomate 2000 Association also pay into a self-insurance system against hail, which covers all cash costs, and benefit from a GAP system implemented by the same organization that monitors pesticide residues.

The main processors, plant nurseries and growers have been jointly financing the "Tomate 2000" program. The INTA (National Institute of Agricultural Technology – La Consulta Experimental Station) is in charge of research and a project for transferring technology weekly. Tomate 2000 Association carried out its 23rd harvest season last year. Each processor who takes part in the program has its own growers and contributes payments according to their volume of raw material processed. Growers are required to apply all of the technical recommendations according to crop directives and are weekly visited by an extensionist (Tomato specialist) belonging to the Tomate 2000 Association.
Growers incorporate the technology being studied and adjusted by INTA to the program, and they pay a fee according to their acreage and farms. This program also has integrated pest management practices with field books, enabling the raw material of the processors that participate to be free from phosphoric, chlorate and carbamate pesticides, with only registered pesticides being used. Processors are able to ensure the traceability of their products.

Production, surfaces and yields
In 2019, the total installed capacity in Argentina was 600 000 tonnes, which means that only two thirds of the country’s installed capacity is used. Indeed, the production of tomatoes intended for industrial processing amounted to 395 000 metric tonnes (mT) during the 2018-2019 season, harvested from an area of just over 5 500 hectares. This result reflects a 10% drop in production (approximately -41 000) compared to the previous season (2017/2018), which had ended with a total volume of 436 000 mT processed, harvested from an area of 6 232 ha, 691 ha more than that of the recent season. Across the country, agricultural yields reached 76 mT/ha, which is 8% higher than the previous season (70 mT/ha).
This latest harvest was the 5th largest in the history of the Argentinian industry, but down almost 140 000 mT from the record of 535 000 mT set during the 2014-2015 season. 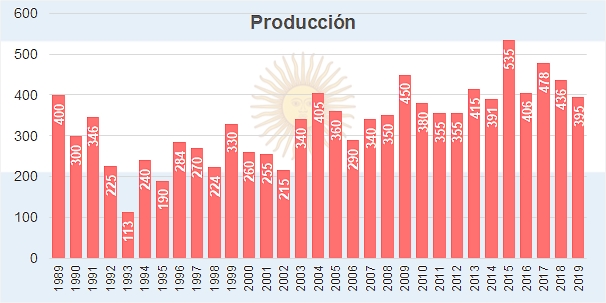 The rigorous application of the best technology has not been sufficient to avoid the negative effects of climatic hazards on production. This season was marked, in particular, by a major hailstorm in the North of Mendoza which severely affected 450 hectares in the Lavalle region, and by persistent rains in December and January which considerably reduced production. 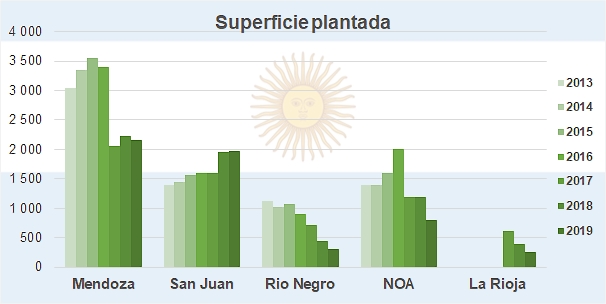 The drop in planted surfaces was mainly the result of a reduction in the capacity of growers and processors to financially support crop costs. The San Juan region is the only one to have recorded a slight increase (+14 ha, +1%) in planted surfaces, while surfaces have decreased significantly in the regions of La Rioja (-125 ha, -32%) and Rio Negro (-140 ha, -31%) due to the lack of working capital and therefore of the number of growers involved. In the case of the Mendoza region, the decline only affected 69 ha, but the yields were impacted by hail (-24%). In the other provinces, yields increased, and more particularly in the Rio Negro region, which benefited from a season without climatic incidents and made the most of technology to increase its agricultural performance by 27% compared to that of the previous season, reaching the historic level of 93 mT/ha. 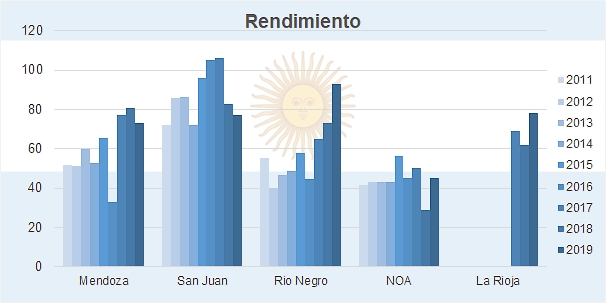 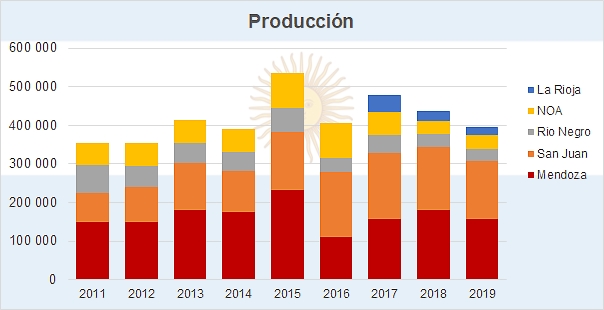 In the Argentinian Northwest (NOA), processing does not generally include contractual agreements between processors and growers. Over the past two seasons, factories in this region have processed only around 36 000 mT on average, as they have been very affected in their supplies by the high price levels paid for tomatoes on the fresh markets and by the low quantities delivered in this context to the industry.
Processing in La Rioja province mobilized just under 21 000 mT due to the limited surfaces that were planted with processing tomatoes. 29 000 mT were processed in the Rio Negro province. The poor performance of these two regions is the consequence of the financing difficulties encountered by growers.
The total surface harvested in Argentina exceeded 5 500 ha, with an average countrywide yield of 72 mT/ha, of which Tomate 2000 Association members (84 growers) represented 2 391 ha (against 2 210 ha during the previous season (2018)), harvesting 206 394 mT (against 192 011 mT in 2018), with a field yield amounting to 86.3 mT/ha in 2019 (against 82 mT/ha over the five previous seasons). 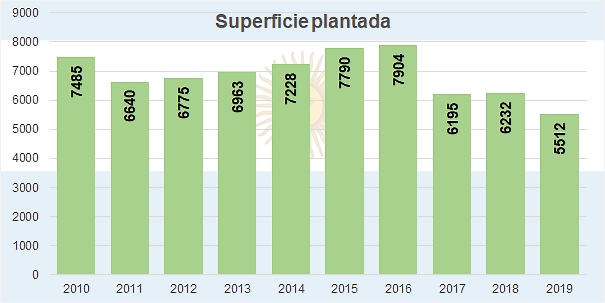 Tomato Processing Companies
There are 19 tomato processing plants in Argentina, down from 21 in 2016 and 34 in 2002. Only 20% of tomatoes are used to produce tomato paste, with a greater share of the crop being used to make puree directly from fresh tomatoes. In the last few years, local processors have readily invested in updating their equipment, particularly technology for making peeled and diced tomato products, and favoring packing equipment rather than capacity development. 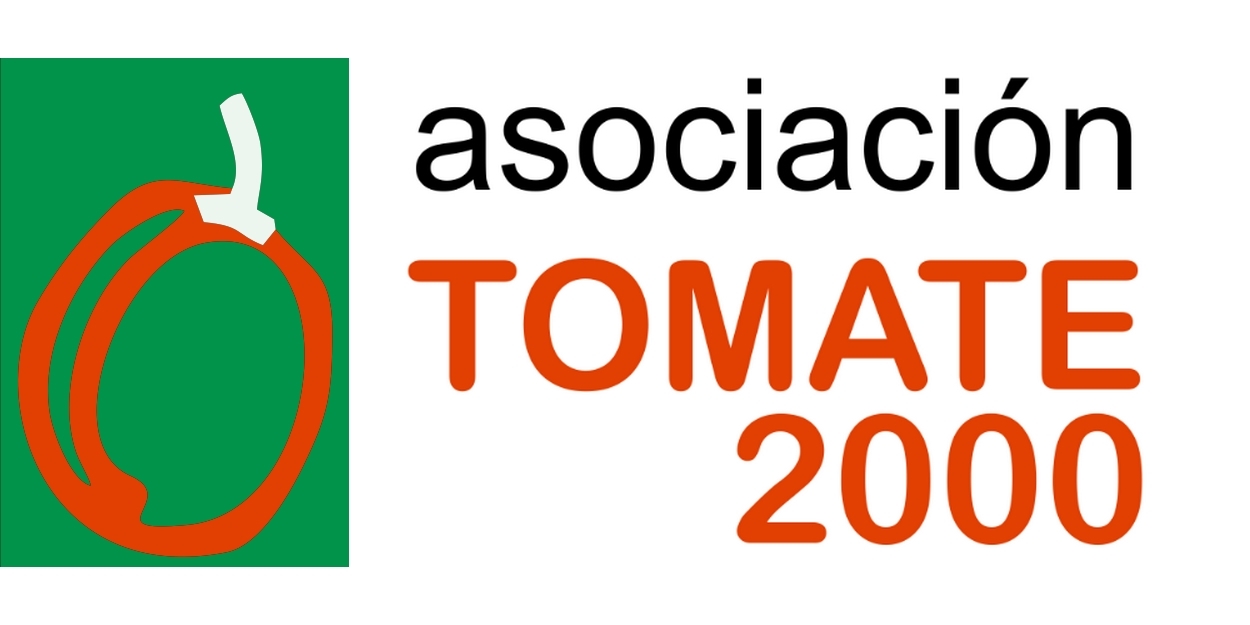 For the 2020 crop, Argentinian professional sources were announcing last December that there would be a slight increase in the volumes processed, to 460 000 mT, grown on total planted surfaces of about 6 600 ha. The Cuyo region is expected to increase its planted surfaces and its production by approximately 20% compared to 2019.