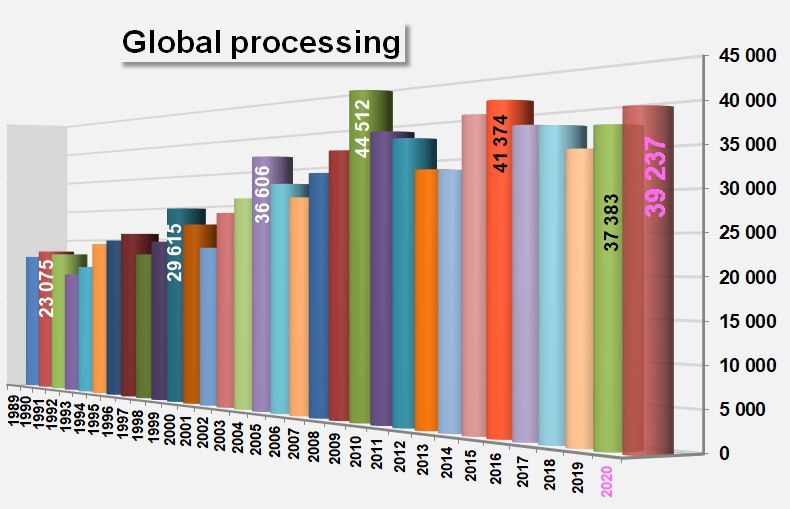 In Egypt, harvesting of summer crop has started after Eid El-Adha holidays, but not so heavy as some of the field workers are still in vacation. It is expected to start processing in full capacity by next week. Quality overall looks good (brix, colour & yield) and the forecast remain unchanged.

In France, three factories are now open in the south-east and the first on in the south-west will open this week for juice. Only 6% of the total crop has been harvested to date in the southeast, less than 10,000 tonnes. Quality is good with high brix above 5.3, but farm yields are just average. In the south-west, yields could be lowered due to diseases (late blight, pseudomonas) consequent to the bad spring. It is also expected that factories will be running this week and next week but may have to stop until the end of the month as there was a 15 days gap between early and midseason planting, unless last week’s heatwave and the new one expected late this week fasten ripening. The forecast remains 155,000 tonnes.

In the south of Greece all factories are open and already about a third of the crop has been harvested. Yields are over 100 t/ha, with good quality and brix. Factories in the central area are starting this week or next week and quantity and quality look promising. The forecast remains 440,000 tonnes.

In the North of Italy, rains and thunderstorms in the last few days stopped harvesting from Piacenza to Ferrara and factories are reopening today or tomorrow. Before the rain, field yields were normal at about 75 t/ha and quality was good in terms of brix, but the texture and firmness not so meaning reduced yields for pulp and dice. To date about 15 to 20% of the volume has been processed. Prospects remain the same although there are concerns of ripening concentration after the rain and of a concentration of the crop in August with little volumes for the late crop.
In the South of Italy, factories will reach full capacity at the end of this week as Puglia, where harvest started on Monday, will reach full volume. Brix and colour are good but at present firmness is not ideal to produce diced and whole peeled tomatoes, meaning factory yield is low. Farm yields are good.
Overall forecasts are maintained at 2.55 million tonnes for the north and 2.45 million tonnes for the south.

In Portugal, two factories started last week and three this week, and the other two should open in the next few days or next week. No significant volumes have been harvested yet but to date brix is high and colour is good. Yields on the early varieties are not too good but they may change in two weeks’ time when crop starts harvesting other varieties. The weather has been fairly good during the last two weeks with daily temperatures of about 30°C but windy and cooling at night. The forecast remains 1.3 million tonnes for now. 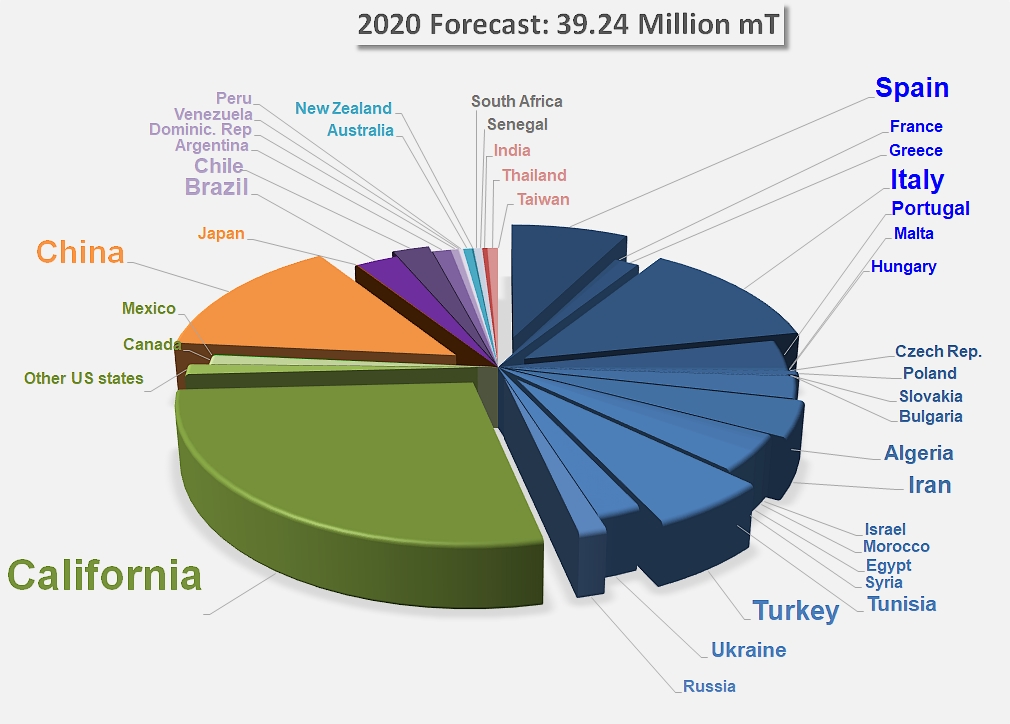 Harvest is now in its 4th week in the Andalusia region of Spain with about 30% of the crop already harvested. The yield was poor during the first two weeks but is now normal with good quality and brix. The extreme heat is speeding the ripening of the late crop and there should be a big peak in production in the coming weeks with worry as to whether factories will cope.
In Extremadura, most factories started at the end of last week or early this week but all are running very slowly as most of the surfaces were planted after 22 April. Quality to date is good.
In the North the harvest has not started yet. July was very hot, with many days over 40°C and nights at 20-23°C causing flower abortions and speeding the ripening by up to 10 days. This could reduce yields but it is too early to confirm. The total forecast for Spain remains 2.95 million tonnes.

In Russia, the main harvest has just started, with rather small volumes. Full capacity in Astrakhan and KBR regions should be achieved next week. Strong hailstorms in late July caused some losses – almost 300 ha was damaged. The forecast is reduced to 530.000 tonnes.

In Tunisia, the total forecast is maintained at 900,000 tonnes, of which 850,000 are for paste production and 50,000 for canned production. Up to 3 August, nearly 700,000 tonnes have been processed. Harvesting and processing have been temporarily stopped since 29 July on the occasion of the Eid El Kebir feast (31 July). 14 units have definitively closed their transformation program, however around ten factories resumed their activity from August 4, sourcing from the North West regions.

Factories in Turkey reopened on 5 or 6 August after the religious holiday and should quickly reach full capacity. Weather conditions are fine, and the forecast is maintained. The crop is later than normal, and harvesting will continue to the end of September.

In Ukraine, the weather is ok and tomatoes are ripening but slower than the latest three years. There is a normal pressure from diseases and pests. Harvesting and processing should start at the end of next week. The forecast remains 850,000 tonnes.

Other countries
In California, the estimate is to process 963,563 short tons (874,130 metric tonnes) this week. At the end of this week (week ending 8 August) we will have processed 3,116,868 short tons, or 2,826,788 metric tonnes). Yields in the south continue to be slightly below contract and solids continue to be higher than historical levels. In the Northern part of the state, overall yields are at contract at this time. Over the last few days we have experienced cooler than normal temperatures and the forecast over the next few days is for temperatures in the mid to upper 90’s(°F). This has helped with being able to stay on top of the crop.

In Canada, the tomato crop is maturing well. Disease pressure has remained low, although due to high humidity and recent rains some fields are experiencing low levels of bacterial speck and spot. Average yields are anticipated, with harvest set to begin 15-24 August.

In China, recently the weather in Xinjiang has been normal, there is sporadic precipitation, crop growth is normal and factories have been started. Low temperatures in Inner Mongolia have delayed harvest. The forecast remains unchanged.

In South Africa, the production estimate remains 140,000 tonnes for the 2020 season.

In the US Midwest, there is no change to report. The harvest should start around 15 August.