US inventory figures published in June by the CLFP confirmed the pattern observed and already widely commented on in recent weeks within the global tomato processing industry. As expected, the quantities available in stock as of June 1 were at a historically low level that has not been recorded by the US industry since June 2007. 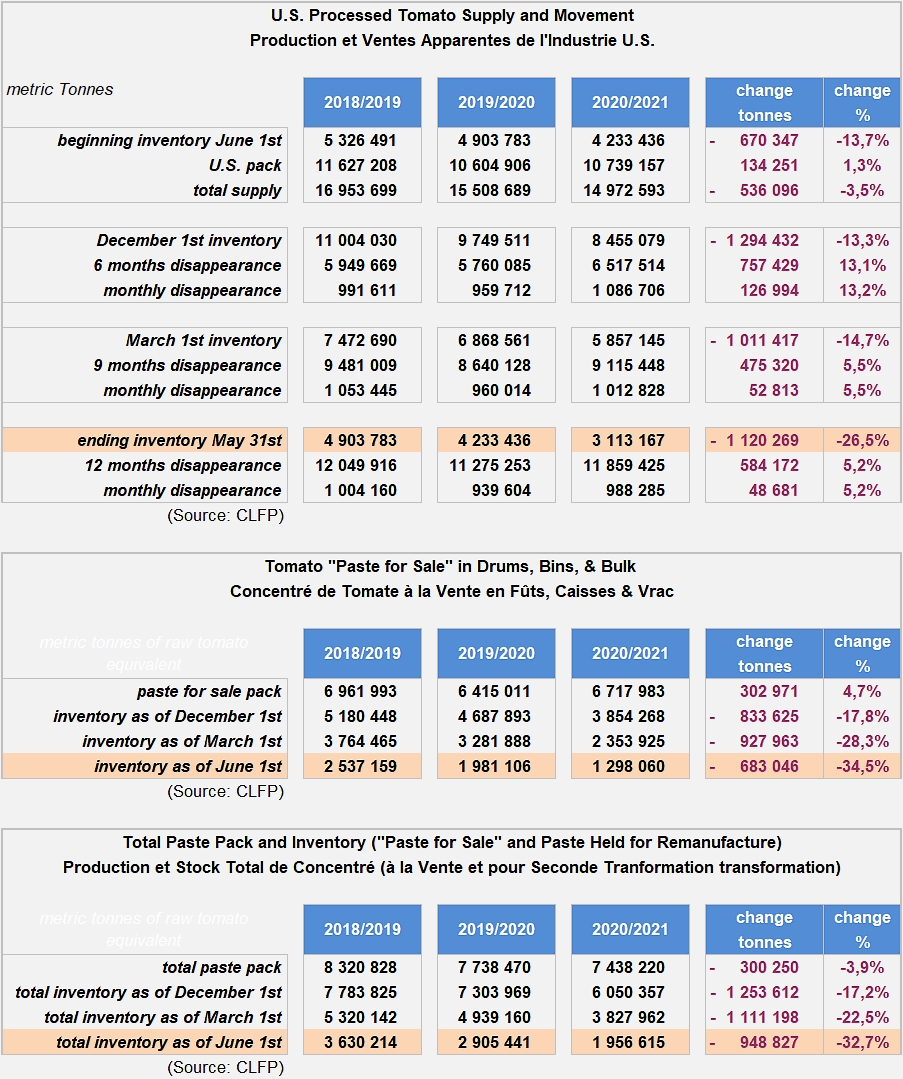 With available volumes of just over 3.1 million tonnes of raw tomato equivalent, the quantities physically stocked in the United States early June were 26% lower than those recorded in June 2020. The main point to be highlighted is the apparent duration of consumption potentially covered by these quantities, which expert commentators estimate at just over three months (see TomatoNews Web Conference of June 8, 2021). This coverage rate is clearly lower than the four months generally considered by local operators as necessary on June 1 each year.
The last three US inventory situation reports (December 2020, March 2021 and June 2021) all stated varying degrees of tension in the US tomato products market for the weeks between early September and early October. In the current circumstances in terms of quantities and sales patterns, the gap between industrial supply and market demand represents a little over three weeks of consumption. 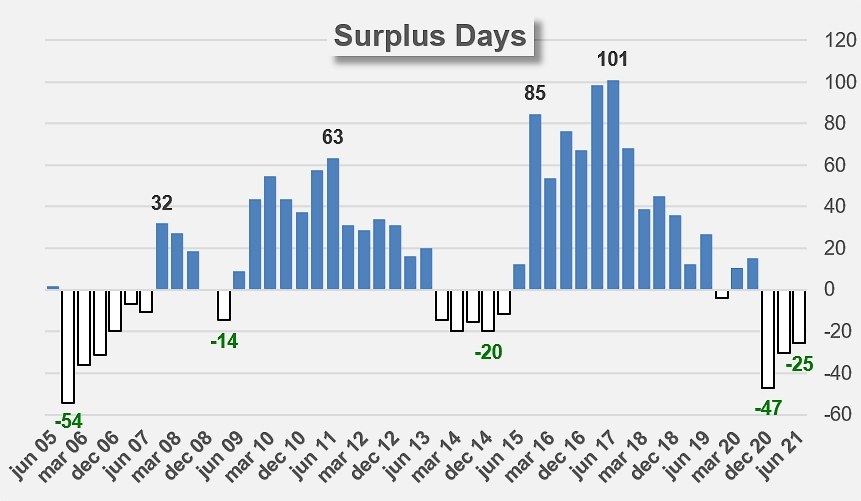 This tension paradoxically results from an improvement in the performance of the US industry. CLFP data shows that the monthly disappearance rate (domestic consumption and exports) reached 988,000 mT on average over the last twelve months, and has therefore increased by more than 5% compared to its level of June 2020 (940,000 mT) and by almost 2% compared to the average level of operations over the last three years. This figure brings the total quantities sold over the period June 2020-May 2021 to more than 11.86 million mT, or about 880,000 mT more than US manufacturers plan to process during the next season. If this dynamic pattern continues – and there is nothing to suggest otherwise, current circumstances are expected to result in a situation in June 2022 that will be even more tense than it is today.

The acceleration in apparent disappearance (1.9%) has not been uniform in terms of product categories. Estimated at 3.47 million mT of raw tomato equivalent, sales “excluding paste” seem to have absorbed 23% more than over the previous year (2019/2020) and 16% more than the annual average over the period running 2017-2020. On the other hand, total sales of pastes (8.39 million mT raw tomato equivalent, domestic sales and exports) have fallen slightly over the last twelve months, for a result that is nonetheless comparable (-0.9%) to that of the previous year, but clearly down (-3%) compared to the average performance of the three previous years. In a detailed breakdown of the apparent disappearance of pastes, it appears that the segment has been driven by an upturn in activity in the “paste for sale” category, with an increase in the quantities sold recorded at more than 6% (7.4 million mT) compared to the result of June 1, 2020, and an increase of nearly 5% compared to that of the three previous periods (2017/2018, 2018/2019, 2019/2020). Conversely, sales of products intended for remanufacture (0.986 million mT) recorded a significant slowdown both compared to the performance reported on June 1, 2020 (around 34%), and compared to the performance of the three previous years (almost 38%).
The improvement in the paste for sale segment can also be observed in the monthly export reports published on our website tomatonews.com (see reports for May 19 and June 17). 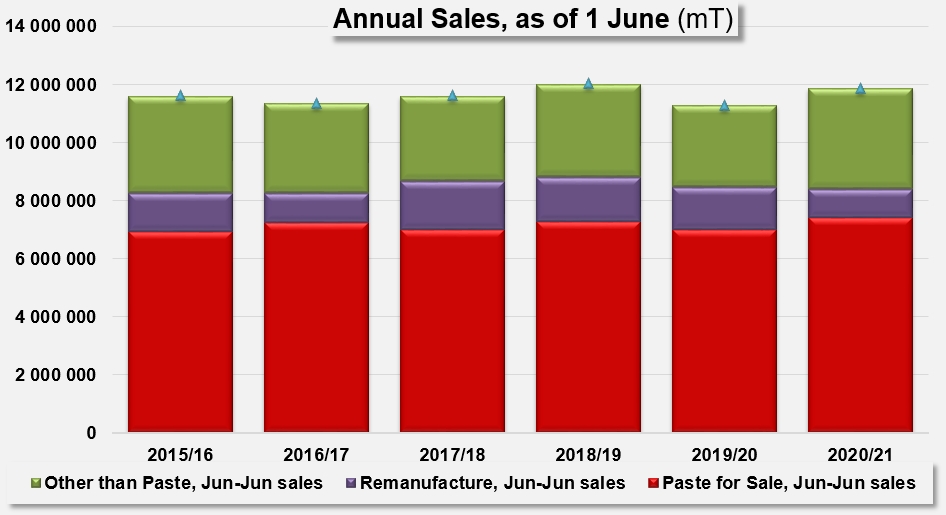 This naturally results in inventories characterized by a spectacular decrease in the quantities of pastes for sale, a notable decline in the stocks intended for remanufacturing and a slight drop in other types of products. 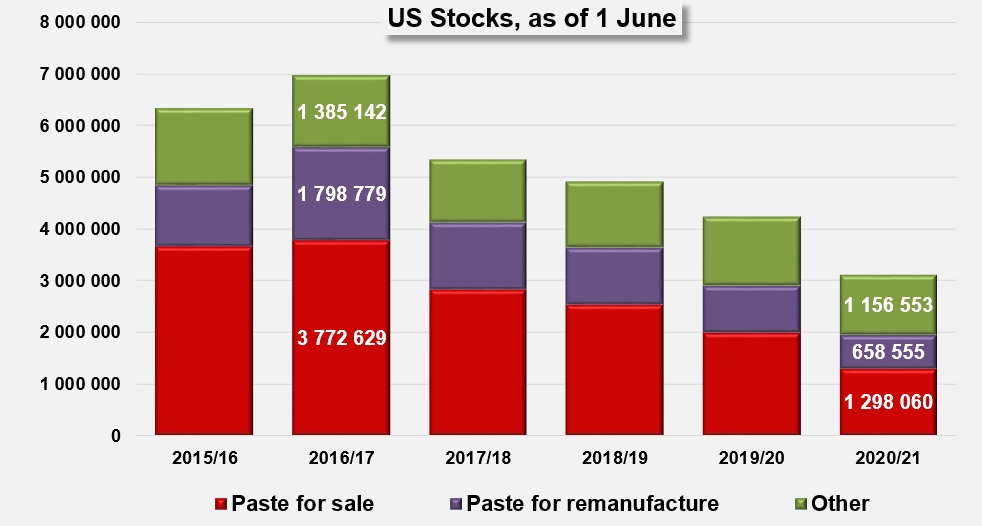 In the current state of inventories and processing forecasts, the US industry finds itself in a completely unprecedented situation: in the words of local operators and world experts of the sector, the problem facing the US industry, particularly in California, combines issues that are climatic, agronomic and structural in nature, which prevented it from signing contracts in 2021 for sufficient surfaces and quantities of raw materials to meet its needs in terms of consumption and the constitution of reasonable stocks. Currently, available data traces a theoretical trajectory of apparent consumption of approximately 12.3 million mT of raw tomato equivalent over the next twelve months, while processing prospects were reported, only a few weeks before the launch of the harvest season, at around 10.98 million mT.
If these figures and forecasts continue to be accurate, they will result in an extremely tense situation in June 2022, with demand coverage now estimated at less than two months.

Some additional information
Apparent disappearance over the last twelve months, compared to the quantities virtually available on June 1st (stocks + processed quantities): the absorption coefficient for processed products has steadily increased over recent marketing years, leading to a notable reduction in stocks. 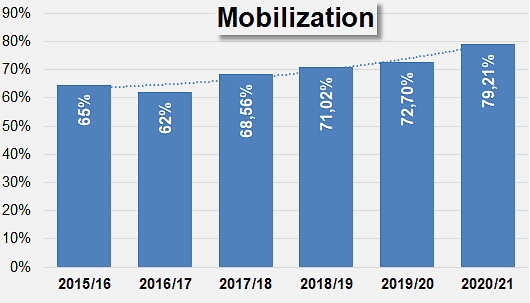 Monthly apparent disappearance (seasonal series) over the past 25 years.

California: now is not the time for expanding capacity