Penalized by the relative strength of the US currency against its main European and Asian competitors, US exports of tomato products once again recorded a significant decline over the twelve month period ending 30 June 2020*.
The decline in business for Californian operators compared to the previous financial year (2018/2019) has been recorded at nearly 75 000 metric tonnes (mT) of pastes and more than 47 000 mT of sauces, in no way compensated by the slight improvement recorded in the canned tomato sector (+7 300 mT).
This decline in performance has resulted in a significant contraction in revenue in 2019/2020 (USD 607 million), down USD 32 million (-5%) from the previous year (USD 639 million) and down USD 82 million compared to the average result of the three previous years (USD 689 million in 2016/2017, 2017/2018 and 2018/2019). 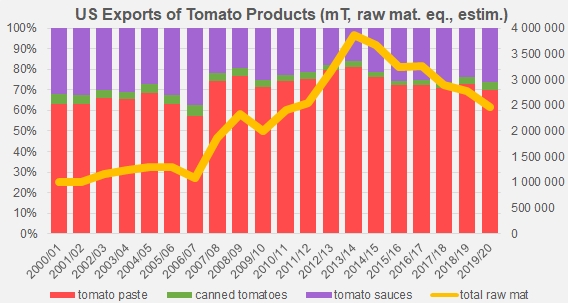 Beyond the drop in commercial profit affecting processing companies, the downturn has indirectly impacted the upstream sector and more specifically tomato growers. On the basis of official customs data and the usual processing coefficients, the decline compared to previous years can be roughly estimated at around half a million metric tonnes of tomato "raw material": where annual exports of pastes, canned tomatoes and sauces & ketchup "absorbed" approximately the equivalent of 2.95 million mT of tomatoes between 2016/2017 and 2018/2019, operations this past marketing year have only absorbed a little more than 2.45 million mT of fresh tomato. The drop has been slightly more marked in the paste category than in the sauces category.

Less than half a dozen regions purchase (or have purchased in the recent past) the bulk of US paste exports (between 85% and 95%). Although the trade results recorded last year in relatively secondary regions such as Eurasia (Russia), the Indian peninsula (India) and especially the Middle East (Emirates, Israel and Kuwait) brought a slightly positive note to the year (+9 300 mT approximately), the accumulated reductions in the quantities shipped to several major countries of Central America (Costa Rica, Colombia, Panama), the European Union (Italy, the Netherlands), South America (Brazil), Asia-Pacific (Australia, New Zealand) and the Far East (Philippines) caused the largest downturn for the past five years. In the final count, more than 84 000 mT of paste remained in the warehouses of Californian factories compared to previous years. The corresponding lack of turnover can be estimated at around USD 50 million. 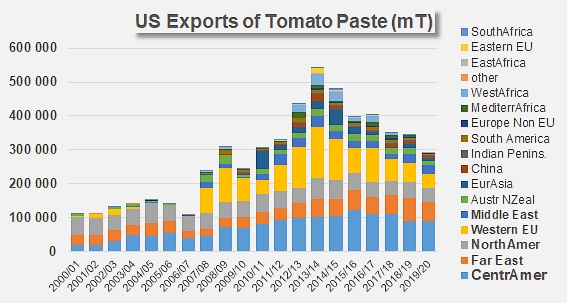 A similar observation can be made for the sauces sector: compared to the average level of operations over the three previous years, nearly USD 39 million did not reach the coffers of processing companies in 2019/2020. Of the five main markets (North America, Central America, Far East, Middle East and South America) served by the US sector, three were down last year, in particular because South Korea, Kuwait and especially Canada (-45 000 mT) significantly reduced their purchases of US sauces and ketchup. These countries are not the only ones, since other important outlets such as the United Kingdom and Australia also slowed the pace of their supplies from the United States.
Conversely, some neighboring countries increased their imports of US sauces. This was the case of Mexico, the Dominican Republic, Chile and a few others, but in clearly insufficient proportions (extra volumes of around 9 000 mT) to counterbalance the effects of the decreases recorded for a large majority of regions (in total, 56 000 mT less than the average of the three previous years).

Contrary to the dynamics observed in other categories, the canned tomato sector has benefited from remarkable developments in a large majority of commercially strategic regions. Foreign sales to Central America (Mexico, Costa Rica, etc.), Italy and especially Canada have recorded notable progressions that are part of an overall increase of around 11 000 mT compared to the average results for the period running 2016/2017 to 2018/2019. A few significant contractions should be mentioned, in particular those of Japan and South Korea, but these do not jeopardize the overall improvement in the performance of this sector. 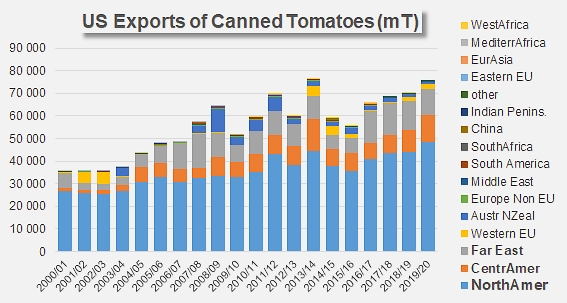 Ultimately, the slowdown in US foreign trade and the drop in turnover in 2019/2020 have essentially been the result of significant reductions in North American sauces & ketchup purchases (Canada) and European paste purchases (Italy). This disaffection of foreign customers for US products, which has been affecting the pastes category since the 2014/2015 marketing year, only affected the sauces category after 2017/2018. So far, as an export sector, the canned tomatoes category is still holding up well.

This last decrease, which has reduced the quantities of raw materials absorbed by export shipments by at least 300 000 mT, is not negligible. It has brought the level of US foreign trade back to what it was between 2010 and 2012, or very close. This pattern has already been observed previous years, and is confirmed by the dynamics recorded after the summer of 2019. It has led operators in the Californian industry to limit the volumes contracted for the current season, initially estimated at 12 million short tons (10.88 million mT), but recently adjusted, due to adverse weather conditions, to 11.4 million sT (10.34 million mT). However, even if they achieve this objective, the quantities processed during the current season could prove to be insufficient to simultaneously supply the US domestic market and foreign sales. At the rate of apparent annual disappearance recorded as of 1 June (12.4 million sT (11.275 million mT)), the quantities available at the start of next season (2021-2022) would only cover around three months of consumption, instead of the four months generally considered as a good balance at this date between inventories and demand.

In addition to the usual uncertainties regarding the outcome of the current season, there are also questions linked to the effects of the pandemic on domestic consumption. Even more difficult to analyze, possible shifts in the exchange rates between the US dollar and other currencies will have consequences on the competitiveness of US products on foreign markets. The most important point to be taken into account remains the extent to which the US industry will have enough processed product at its disposal to position itself competitively on the global market in 2020/2021. 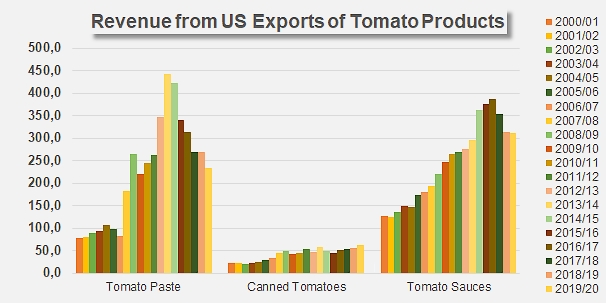 Some complementary data
* : The official close of the US fiscal year is 30 May, but the date of 30 June is used for comments on trade statistics, chosen to allow comparisons with other countries being studied.

US Exports of Sauces and Ketchup, by region 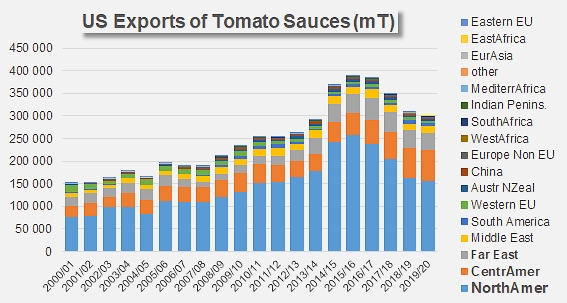 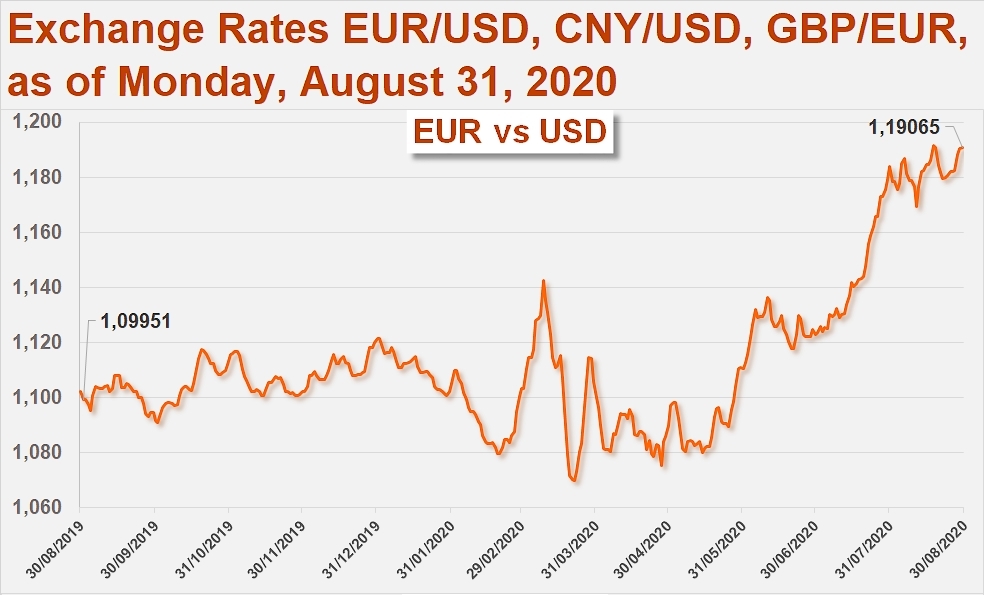