There are nearly 150 processors of tomatoes and other fruits and vegetables active in Iran. Some of the important ones are:

Kamnoosh Food Industries Company
Founded in 1988 in the Golestan province, Kamnoosh is one of the largest processors in Iran. In a factory area spanning 13 hectares and with an annual production capacity of 17,000 tonnes of tomato paste, 3,000 tonnes for tomato puree and 5,000 tonnes of fruit paste, the Company exports its products to Russia, Armenia, Romania, Turkey, Poland, South Africa, Oman, and the Persian Gulf countries. Kamnoosh Food Industries Company uses modern industrial machinery of Italian Rossi & Catelli Company (now CFT) for its processing activities. 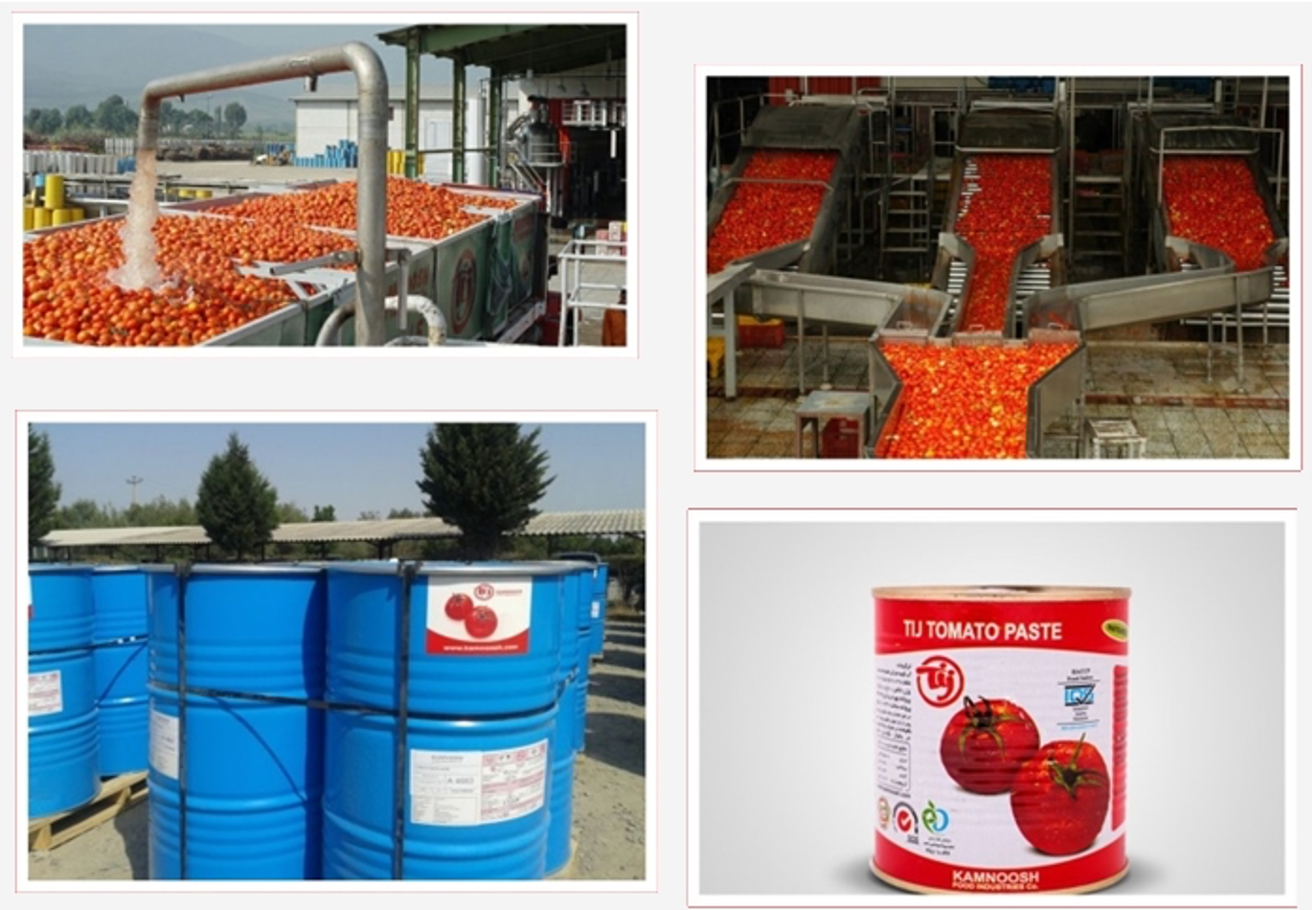 The production facility is equipped with three evaporators and two complete aseptic lines, and the final output isstored in aseptic metal and glass cans. The Company uses hybrid and standard tomato varieties for processing.

“There are many challenges, such as the lack of coordination between the prices of raw materials and the product produced. The lack of governmental support for the private factory sector in terms of banking facilities, etc. In the first 2 months of the pandemic, we faced some challenges, but we continued to operate in accordance with health protocols and did not close the factory.”- Representative, Kamnoosh Food Industries Company

Rojin Taak Agro Industries Company
Rojin Taak Agro Industries Company, established in 2001, is a professional manufacturer and supplier of tomato paste, fruit puree, and canned products. The factory is equipped with the most advanced food industries machinery of Ing. Rossi & CFT and has the processing capability of 4,300 tons fresh tomatoes per day and the production period is for 100 days. From early June to the end of October. The peak season of production is from August to September.
“The Covid-19 pandemic has had an impact on our export business leading to a reduction of the volume of exports, but we managed to export about 22,000 tonnes of tomato paste. We had a good tomato year in 2020. But this year the shortage of water has caused tomato production to decrease significantly.”- Seyedeh Aghdas Musavinejad, Export Expert, Rojin Taak Agro Industries Company 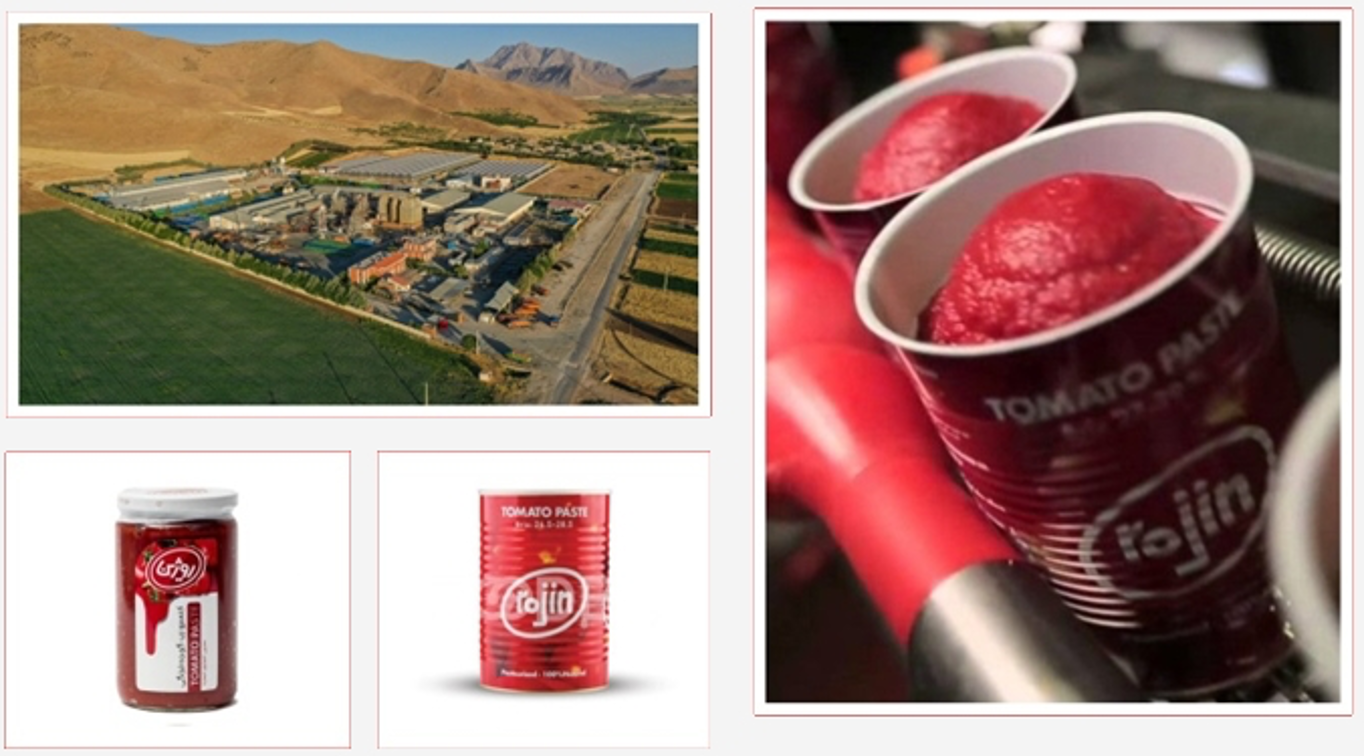 The company has three production lines, which can fill 480,000 cans of tomato paste per day in all kinds of specifications, like 800 gr and 400 gr. The diced and peeled canned tomato production line is also producing 1.5 million cans per year. Rojin Taak is the only processor in Iran that produces diced tomatoes. The company exports to Poland, Brazil, India, China, Armenia, UAE, Italy and many more countries. The production lines of the factory are equipped with fruits processing machinery as well; and at the end of tomato paste production season, the company has the capability of processing 500 tons/day of fruits into the puree in sterilized packaging.
Due to the high capacity of production, high domestic and foreign sales, and the necessity of the sustainable supply of metal lid and cans, the Company decided to set up a can production plant.
For this purpose, the process of designing, purchasing, and implementing the machinery, including premier and coating, printing, shearing, sewing the can and pressing the can lid was initiated in 2011 and in 2012, the plant entered in its operational phase.

The agricultural and farming promotion project of this company has also been registered in FAO as the most successful project in Asia. Besides, the Company has a successful track record in exporting to the Middle East countries, North African and Asian neighbors over years.

Kadbanoo Company
Kadbanoo Co is a leading food processing factory, manufacturing under the brand name of “Delpazir”, started its activity in 1949 in a land of 17,500 m2 located in the suburbs of Karaj Iran. 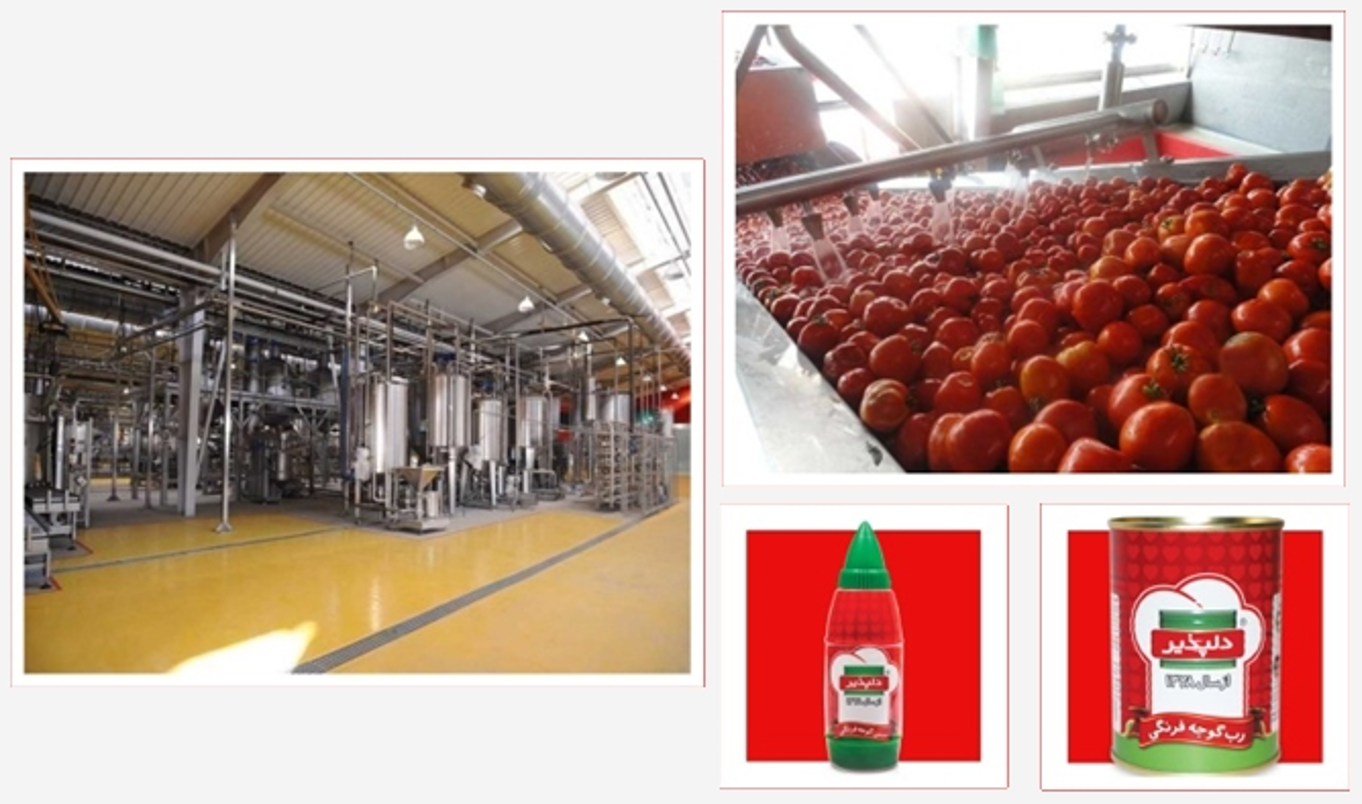 “Our annual production capacity for tomato paste is 15,000 tonnes per year which is exported to the GCC (Gulf Cooperation Council), CIS, Canada, Australia and other Middle East countries. We use fresh tomato varieties for processing at our factory. Apart from bulk packaging in 230kg Aseptic drum (mainly for exports) we also sell our sauce products to retail shops in small pack sizes. Last year, the Covid-19 pandemic caused disruption in the processed tomato supply chain across Iran. We also faced challenges in terms of the transportation of goods as well as money transfer.”- Aslan Nouri, Commercial Manager, Kadbanoo Company 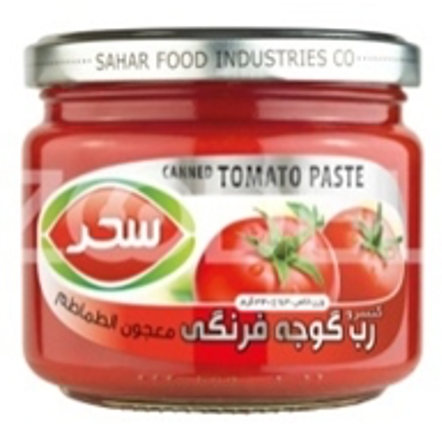 Sahar Food Industries Co. is an Iranian food processing company headquartered at BuAli Industrial Town in Hamedan, Iran. The company was founded by the private sector in 1991 and started its productive activity in an area of 6,000 square meters in the early years of its establishment.
Products: Sahar Food Industries Co., offer a wide variety of products in 76 types of product, 273 types of packaging and 9 products groups. The variety of products includes tomato paste, pomegranate paste, pickled and salty pickled, jams and honey, compotes, conserve, hot and cold process sauces.
Export: In recent years, in addition, the major exports to European countries including England, Germany, Denmark, Sweden and Russia, and CIS countries, the Company exports to the following countries such as Australia, Canada, Kuwait, Iraq, Qatar, and Bahrain as well as during negotiations and agreements with buyers from African countries, Central Asia and other Gulf states an export plan has been on the agenda.
The Company has an annual tomato paste production capacity of 6,000 tonnes per year. 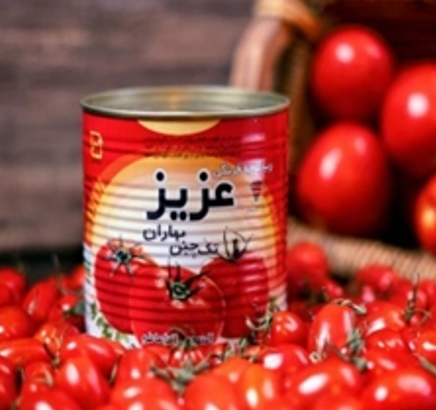 This group has a total area of 20,000 square meters for its facilities and its built-up area is 7,915 square meters. The company’s current products are tomato paste, pickled cucumbers, tomato purée, pickled olives, and different kinds of other pickles. Every year this company produces 8 thousand tons of tomato paste and 1 thousand tons of pickled cucumbers in different packaging using the best machines and according to national standards of Iran.

Takchin Baharan Company, as one of the pioneers and founders of the modern food industry in Iran, has adapted itself to global producers, the highest quality, and national and worldwide standard levels, using experienced specialists, and modern technology.
Currently, Takchin Baharan’s products appear in the markets of Russia, Iraq, Afghanistan, Kuwait, and other Persian Gulf States in addition to the national distribution. The tomato paste products in Takchin Baharan are distributed to the market in metal and glass containers weighing 18 or 4 kilograms and 1600, 800, 700, and 450 grams.

Harpak Food Industries Company
Harpak Food Industries Company, founded in 1998, with the aim to produce tomato paste and fruit purees in aseptic packaging for exporting purpose to foreign markets in Fars province which is one of the best regions of tomato cultivating areas in Iran with the most modern machineries in the land with 35,000 sqm and proofed area more than 15,000 sqm. 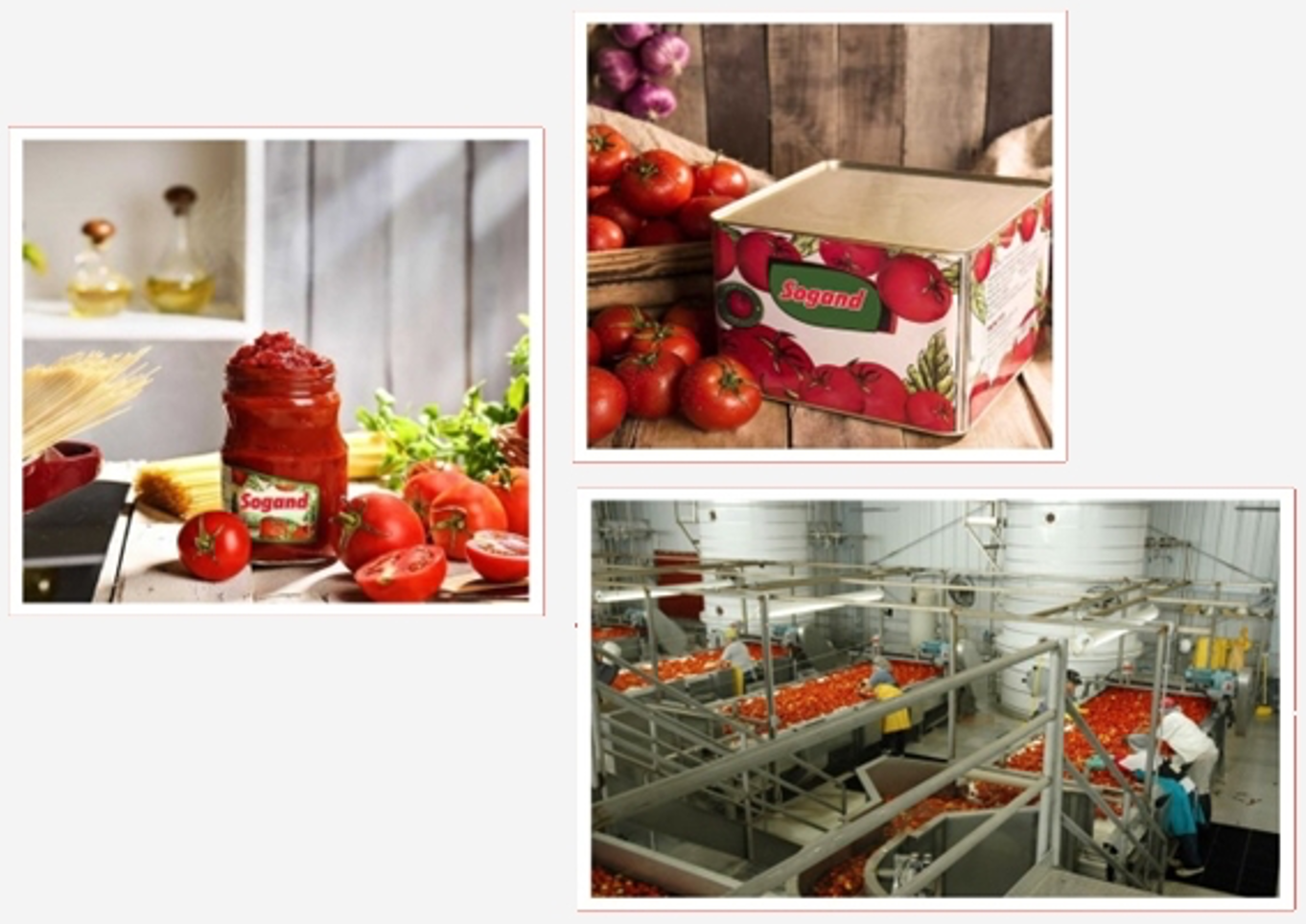 In order to ensure the quality of the raw material needed to process, this company started to grow tomatoes under the most modern technologies to become one of the biggest agro-industry companies in Iran.

The incoming tomatoes after getting confirmation from the quality control unit are washed in different stages and then become sorted. After processing, they are packed in half-kg, 75 gr, 140 gr, 1 kg, 5 kg, 10 kg cans and in 220 kg aseptic bags ready to supply the market under the brand name “Sogand”, “Yasina” and private labels.
“The annual production capacity of tomato paste at our factory is 30,000 Metric Tonnes. However, this year due to drought in our country, the production of tomatoes has decreased and as a result we predict that our tomato paste volumes will not reach the levels of 2020 gone. The drought has not just affected Iran, but other parts of the world too.”- Ehsan Nik, CEO, Harpak Food Industries Company
Related companies