The Italian tomato processing industry ended 2018 with an increase in results of close on 3% against the previous year. The total turnover for Italian exports of tomato products amounted last year to over EUR 1.74 billion, which is also an increase of approximately 2% compared to the average performance of the three previous years (EUR 1.71 billion).
Most of this revenue (EUR 929 million, 53% of the total) was generated by exports of canned tomatoes, which have been the spearhead of Italy's foreign trade and positioned the country in first place worldwide for this category. Foreign sales of pastes amounted to approximately EUR 613 million (35% of the total turnover), while exports of tomato sauces "only" produced about EUR 200 million. 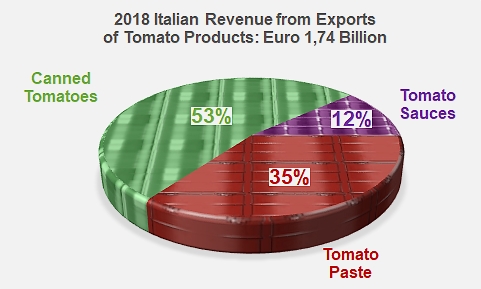 It should however be noted that this last category is the one that has demonstrated the greatest impetus in recent years, with an average annual growth rate (CAGR) in revenue of close on 4.9% for the period running 2009-2018 (and 7.4% annually since 1997). Canned tomatoes, being the main profit-making category of the Italian industry on the export market, increased over the period running 2009-2018 at an average annual rate of 3% (and 4.6% over the past twenty-two years). Despite being very competitive, these two categories nonetheless remain less exposed to worldwide competition than pastes, a category for which growth has been much slower (CAGR of 3.1% over 1997-2018), and at times even negative (-04% average annual growth rate over the past ten years).

The Italian tomato processing industry has duly noted this fact, and has been preparing to launch two major promotional operations in the USA and in Asia, each benefiting from a subsidy of EUR 3 million allocated in the context of EU regulation 1140/2014 for the promotion of European agricultural produce. In recent years, the industry has taken notice of the change in orientation imposed by the progressive erosion of domestic consumption of tomato products, and has endeavored to increase its volumes shipped to the main third-party markets where more dynamic performances have been recorded. This is the case of the USA, where exports of canned tomatoes were more than 10% higher in 2018 (124 700 mT) than the average of the three previous years (114 100 mT), of the Middle East, where the increase exceeded 14% (from 43 200 mT over 2015-2017 to 49 400 mT last year), of South America (23 200 mT in 2018, compared to 19 700 mT on average from 2015 to 2017), and of most of the other regions whose combined purchases grew approximately 4% over the periods considered. In total, Italy's foreign sales of canned tomatoes amounted to 1.38 million mT of finished products last year, which is an increase of close on 8% (+97 400 mT) compared to the average of the three previous years (1.28 million mT). 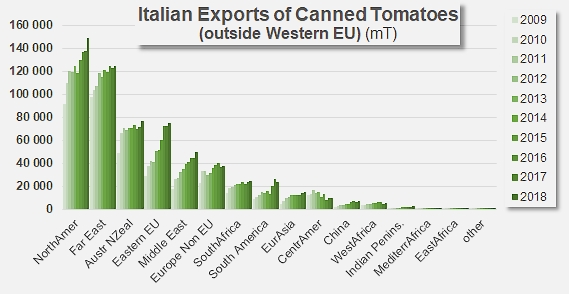 "We need to put extra effort into Italian products, explained Giovanni de Angelis, the General director of the ANICAV, and three-year financing programs will allow us to carry out between 2019 and 2021 a series of initiatives in targeted countries, like participating in the main food industry exhibitions in the USA, and promoting products through the HoReCa channel on markets like China and South Korea, which we still have to enter. In the United States, for example, the Pizza Festivals have become major events."

For the Italian association, marketing operations are also interesting on the markets of Asia, particularly in Japan, even if this country now represents a consolidated outlet for canned tomatoes, whereas China and South Korea remain challenges, though with promising potential. 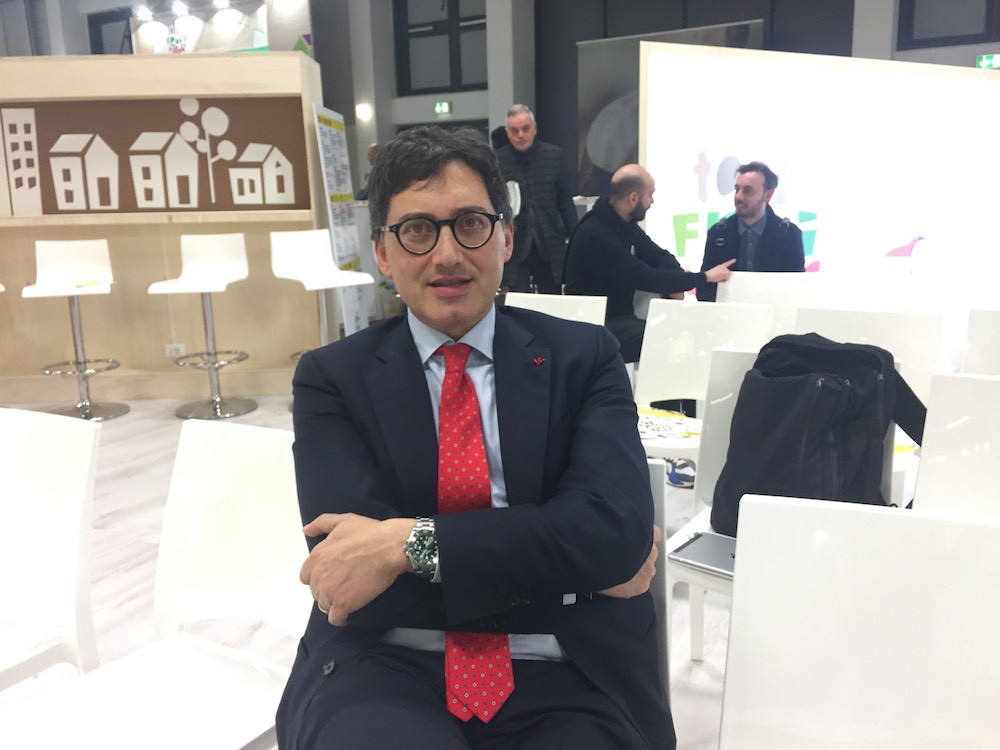 The ANICAV Director continued by explaining that the industry is considering, among other options, setting up a registered trademark with the aim of focusing attention on products that are made with 100% Italian tomatoes. "This could be tested in the United States, where we have been facing problems due to Italian-sounding brands, which we hope to solve thanks to these promotional operations."

Such initiatives are aimed at stabilizing profitability thanks to a better positioning on the markets, taking account of the calendar differences in production programs between Italy and the USA. De Angelis ended by saying: "With these products, the problem of the volatility of their prices is due to their extreme seasonality. The tomatoes harvested on the 70 000 hectares planted in Italy must be processed within 60 days in order to produce products that will be consumed over the following 14 months. 60% are exported, and 40% remain in Italy. But there has been a tendency for the export proportion to increase, as domestic consumption has progressively slowed. This is a natural evolution."
Over the past ten years, Italian exports of canned tomatoes have grown at an average annual rate of 3.5%, which is an average annual increase between 35 000 mT and 45 000 mT of finished products.

Over the same period, the growth of Italy's foreign sales of tomato sauces has been even faster than that of canned tomatoes. From just over 80 000 mT of finished products in 2008, exports have increased at a rate of 5.2% per year, which is an average annual increase between 4 500 mT and 6 600 mT, for a result of more than 134 200 mT last year. Over the past two decades, between 75% and 80% of the quantities exported each year were shipped to a country of the European Union, a region that has also been responsible for most of the increase in the foreign sales of Italian sauces. So the overall performance in 2018 was approximately 16% (18 300 mT) higher than the average of the three previous years, notably thanks to an increase of more than 12 900 mT in the exports of sauces shipped within the Community market (Germany, Netherlands, France, Austria, etc.), and an increase of more than 2 000 mT on the markets of the Middle East (Israel, Saudi Arabia). 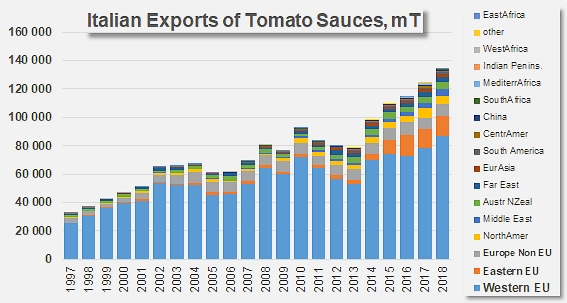 Industrial and agricultural operations and the revenue generated by foreign sales in the sectors of canned tomatoes and sauces have compensated at a country-wide level for the sluggish growth of paste exports. However, given the relative specialization of the production and processing regions – northern Italy and southern Italy – it is likely that the beneficial effects resulting from the foreign trade in sauces and canned tomatoes have not been felt the same way throughout the Italian industry as a whole.
In a context of uncertain dynamics since the beginning of the 2000s, the level of annual operations in the sector of paste exports has varied between 600 000 mT and 700 000 mT of finished products (mainly low-concentration purées in retail formats – customs code 20029019 and 12-30° Brix pastes in retail formats or in catering and industrial packs – customs codes 20029031 and 20029039), around an average annual volume of close on 657 000 mT.
2018 saw the confirmation of this lacklustre dynamic, with a result of 689 700 mT exported, which is 3 600 mT more than in 2017 (+0.5%), but which only exceeds the average performance of the past three years by 400 mT (+0.1%).
In the end, Italy's foreign trade in the paste sector in 2018 was more or less a repeat of the final result and regional distribution of 2017 and, barring a small jump linked to the Libyan market in 2016, almost identically repeated the result of 2016. Over the past ten years, Italian exports of paste have grown at an average annual rate of 0.4%, which is a regular annual gain of approximately 2 600 mT of finished products. 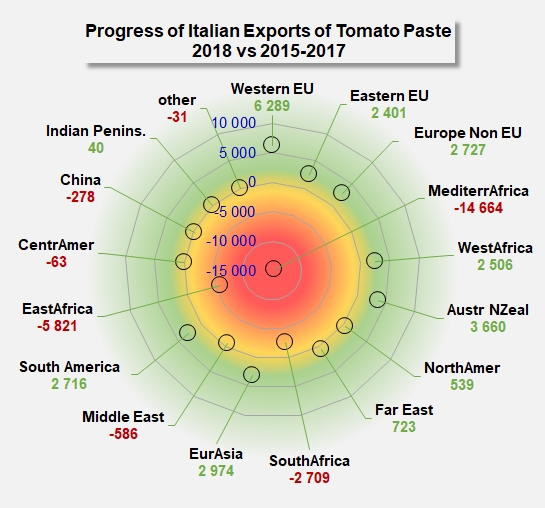 Some complementary data
Increase in the turnover generated by Italian exports of tomato products between 1997 and 2018. 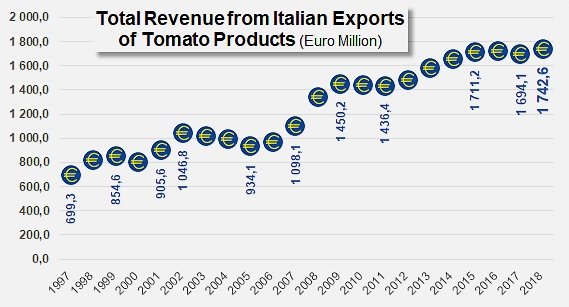 Evolution of the turnover generated by exports of tomato products, presented by category. 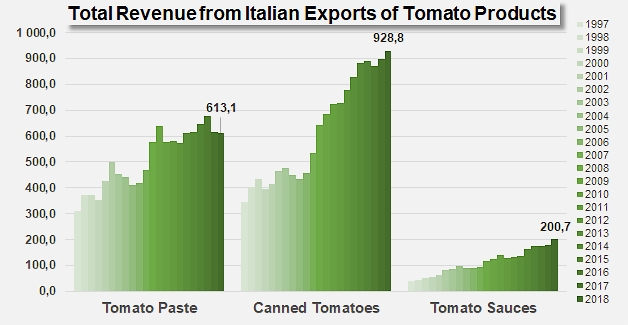 Evolution of Italian exports of canned tomatoes. Almost two-thirds of foreign sales were shipped to markets of the European Community. 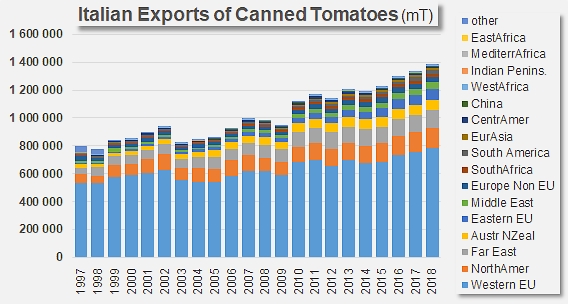 Comparison of 2018 results with average performances recorded over the period running 2015-2017, by region (outside of the Western European Union, which absorbs 65% of Italy's foreign sales of canned tomatoes). 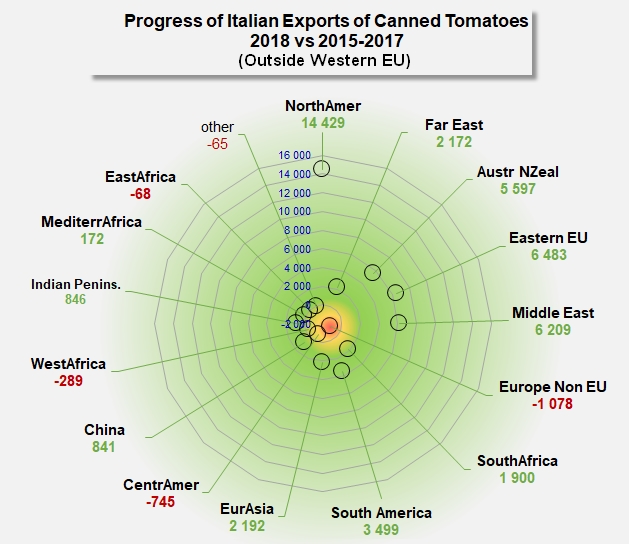 Evolution of Italian exports of tomato pastes. 65% to 70% of foreign sales were shipped to markets of the European Community. 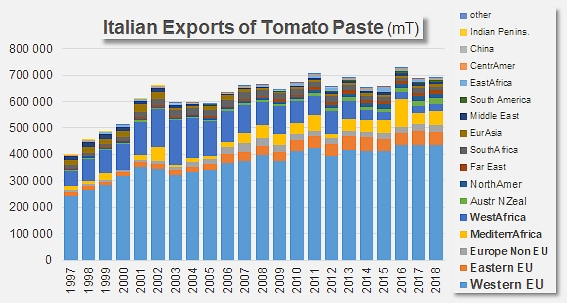 Evolution and distribution of Italian exports of tomato pastes, presented by category. 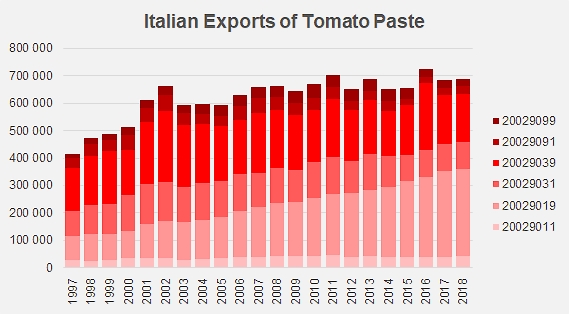 Further details regarding the results of Italy's foreign trade, and comparisons of these results with global competing operators will be published in the special issue of Tomato News that is due to be printed for the Tomato News Conference hosted in Avignon in May 2019.