From the presentation by Martin Stilwell, Tomato News Conference, 16-17 May 2019, Avignon

In his opening presentation for the Avignon Conference, held on 16 and 17 May, Tomato News editorial board Chairman Martin Stilwell drew attention to the particularities of the current 2019 season, in a context that is rapidly changing in terms of markets, strategies, investment choices and, therefore, in terms of the relevance of opportunities for reflection and encounters provided by the 2019 Tomato News Conference.

In this article, we present the key-points of his thoughts in the situation of the worldwide industry, just a few weeks off the start of the 2019 processing season.

“…a year delicately poised between surplus balance and shortage”
“We’re at an interesting time in terms of our activity, regarding the rules which used to apply and which guided us in knowing what to do strategically, where to invest, are changing. They’re changing very fast. The essence of my speech is to try to give an idea of where we are this year, what’s happening and what might happen this year. It’s an interesting year because we are delicately poised between surplus balance and shortage – which is quite an interesting situation for us as an industry – because typically we are in surplus.” 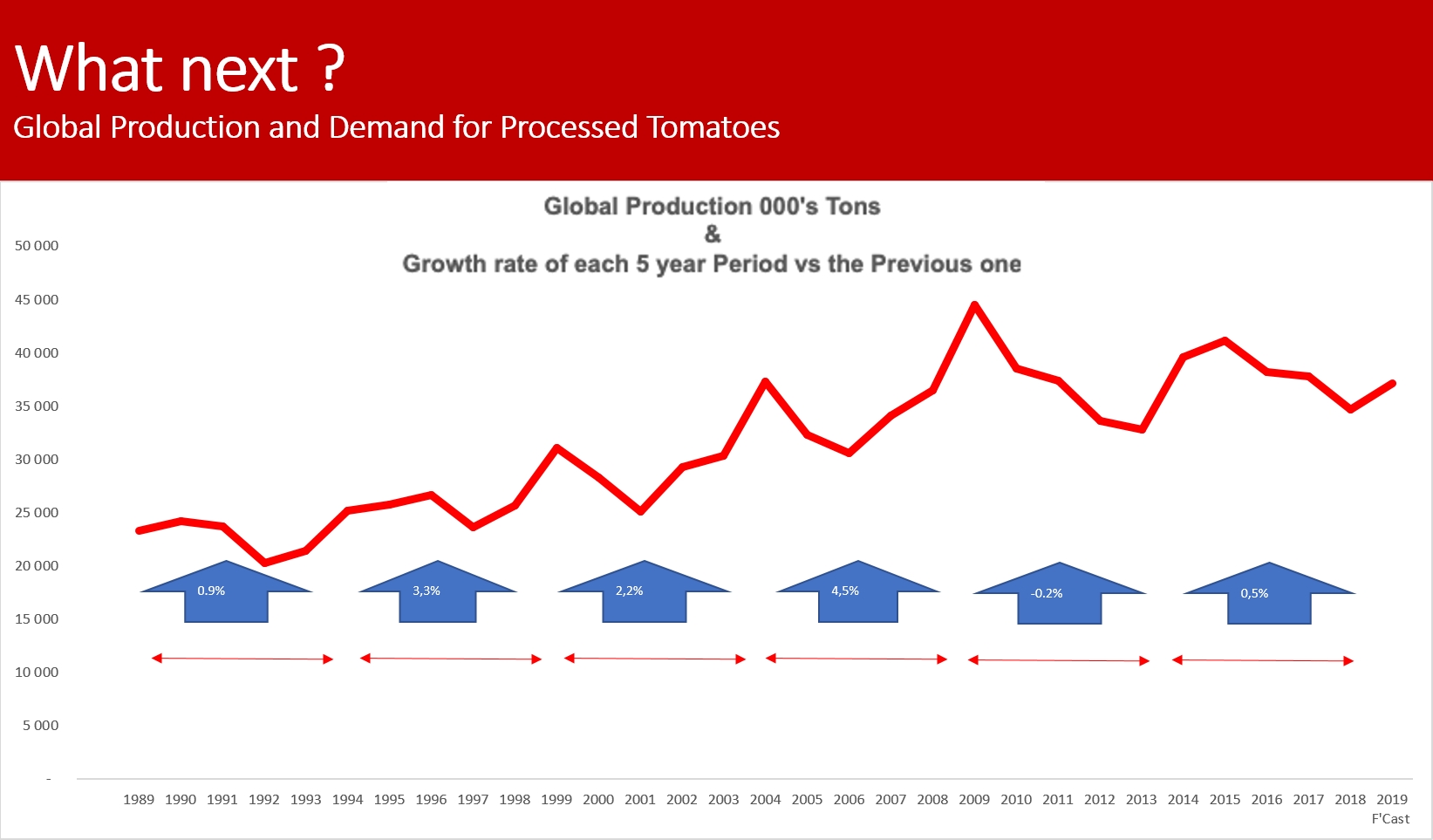 “By looking at the typical five-year cycle, we can see the difference in consumption in the different periods; and if we look back over history, we had in the early 90’s a long phase of slow growth, then we went through a period of enormous growth. Enormous growth inevitably means that many of us invested in increases in processing capacity dramatically and then in 2008/2009 we had a global financial crisis and something happened, the world changed, and we stopped growing; we didn’t stop growing and grew slowly, we stopped growing and started going backwards. During the next period, we actually decreased in global consumption and now we are either flat or no growth at all.
If we translate it into consumption, we have come up to a consumption very quickly from the low 20 million tonnes to 36, 37 or 38 million tonnes, which most people judge we are currently consuming annually at the moment. Then it’s essentially flat, even with some slight signs there might be some growth in the last years.

Looking at the difference between what we produce and what is consumed – basically talking about stocks – there is an interesting pattern driven by usual human behavior in response to market prices, which explains the classic ups and downs in the global production. More interesting are the important changes which took place over the past thirty years, between the early 90’s when production and consumption were established by the market itself, by consumers actually eating our products, and the current period where we are having to show restraint. In the period thirty years ago, we didn’t have enough capacity, and the capacity restrained the market supply. At the moment we have, we are producing significantly below our peak production of 2008 and 2009, and we have to cut back the processing capacity.” 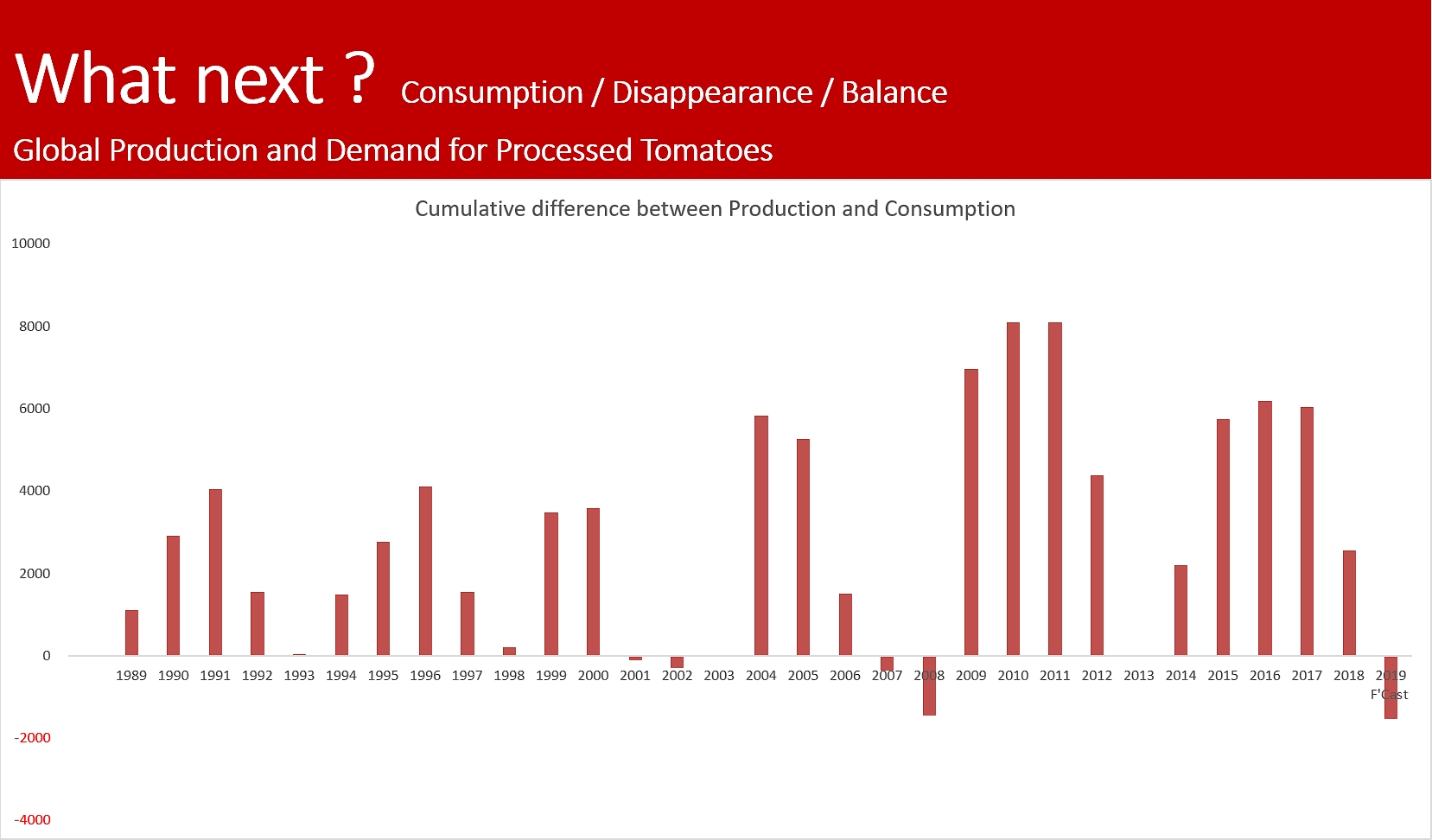 If we look at what is happening or what we expect mathematically this year, we should go short. Of course, “short” is a very relative thing – when we talk about stock, we are talking about the stock coming out of a crop, and we are talking about the stock which will be in the hand until the following crop. So really what the graph says is that if we produce what we think we are going to produce, we will be very short in 2020, not now.

“Considering the various hypotheses, the market is delicately balanced between being possibly very short – or not very short. Essentially, if we have a year like last year, starting with a forecast of about 37 million tonnes of production, but ending up with 34 million tonnes, due to lost tonnage in some important countries, we go to a shortage like we haven’t seen since 2008. However, if we don’t have that shortage in production, and if we actually have zero growth in consumption, then we are pretty well in balance, producing what the market requires; this means that going into next crop, there will not be very much stock and the market essentially will be established by what we propose – we as processors, we as growers – to plant and to process.” 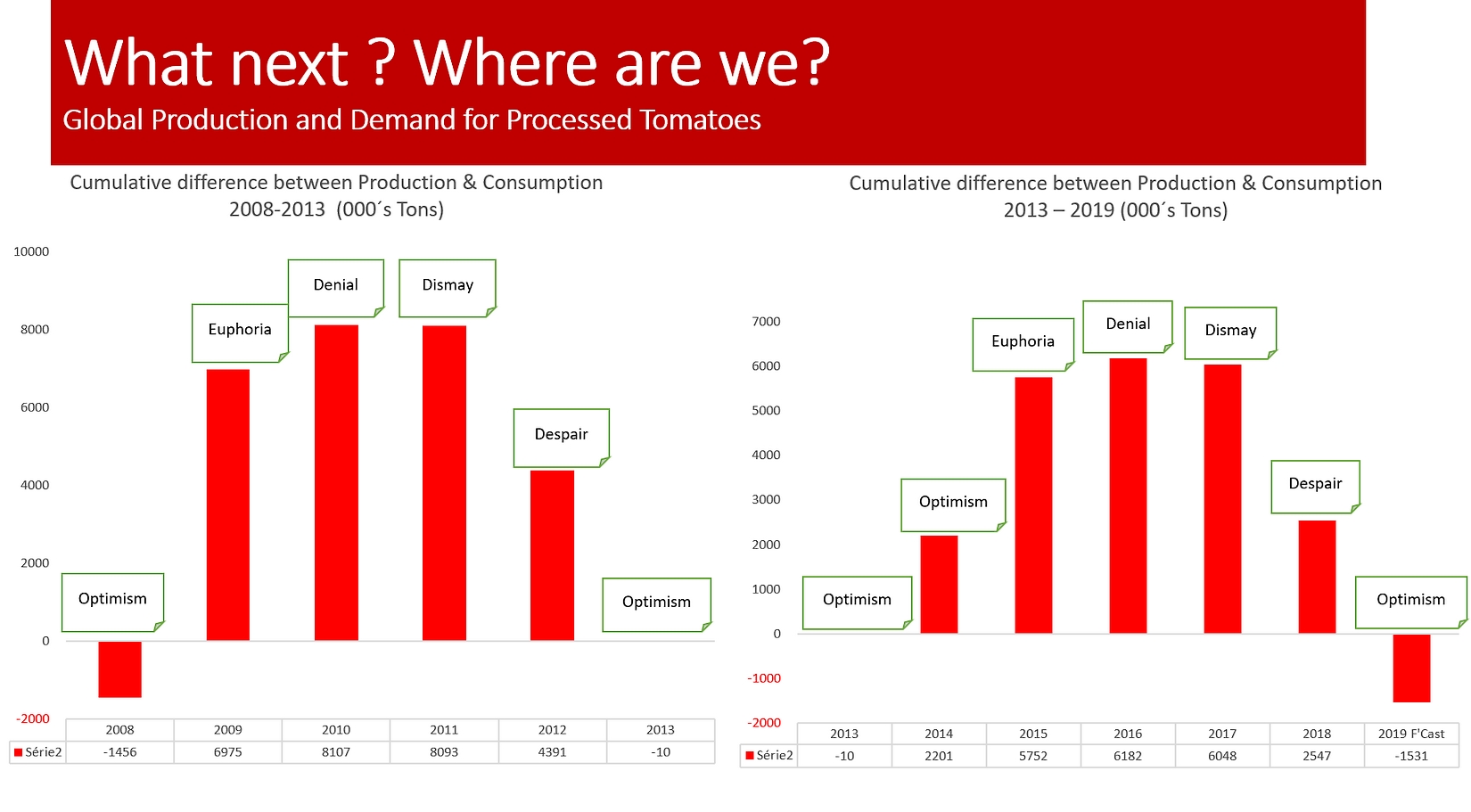 This is the reason why we should think now with a 6-year cycle, taking into consideration a “depression” year in the cycle which becomes “dismay, depression, despair, optimism, euphoria and denial”. If we look at the number of years which we have that we could consider as good years, we have only one in six, because optimism is when things feel better but the market itself actually is not any better. A year like this, when things are better, should be followed by analysis. The tomato processing industry should think carefully about what it is doing. We are the ones who establish what is produced when the consumer is not – generally not – consuming to our capacity. It means that analysis, restraint, moderation and sustainability would be a much better cycle for us than the current one.” 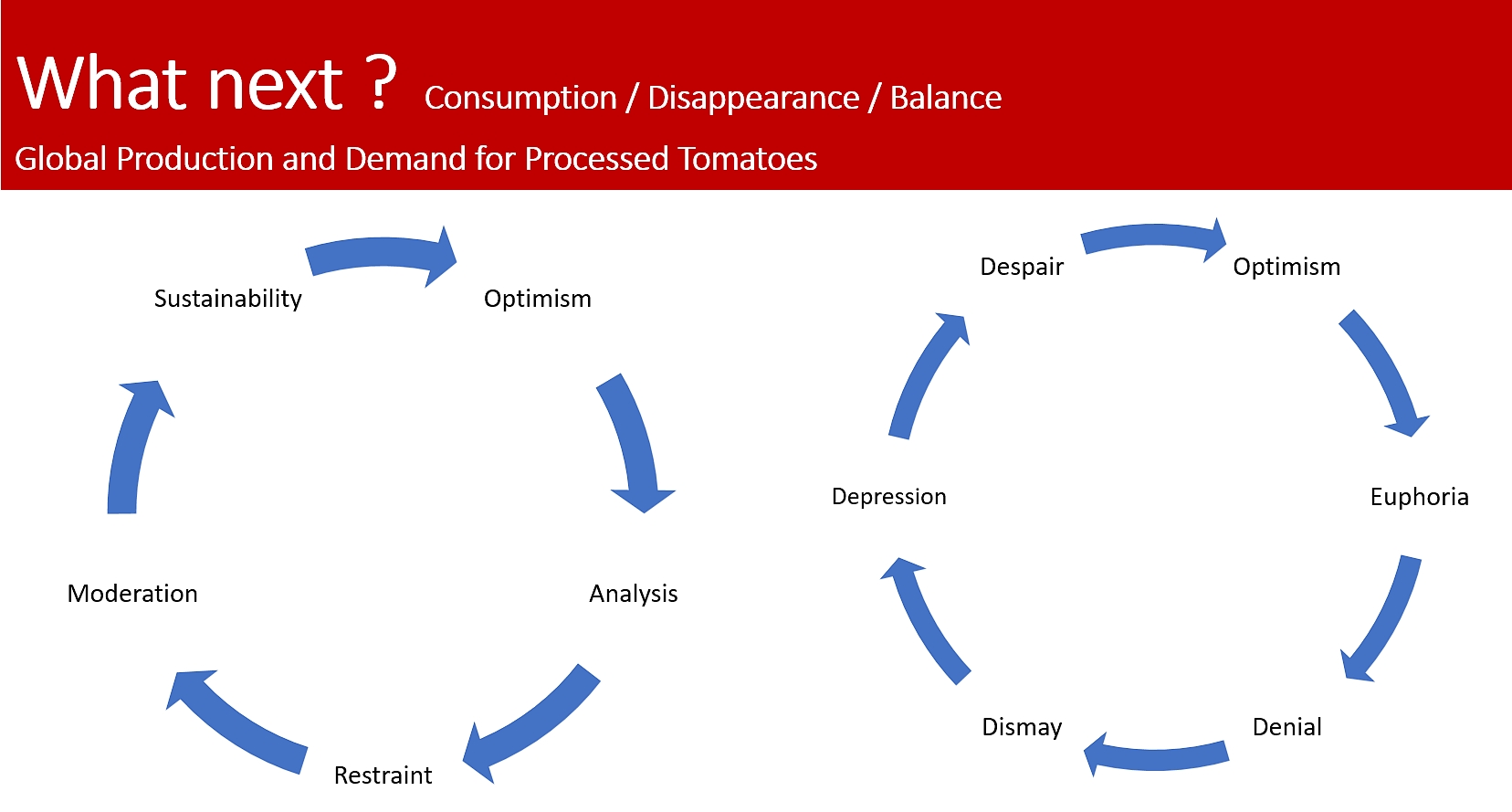 “After talking about the market and what could happen, notably depending on US dollar-Euro exchange rates and prices of oil which affected our markets, one of the other things that we read about in the press all the time now is climate change. It was called “global warming”, and I do think that “climate change” is the more appropriate term. Global warming is clearly occurring but for us as an industry, it has its beneficial effects. Generally, unless reaching the extremes, a warmer year is more attractive for a tomato crop than a cooler year, and therefore for us it’s not that bad. The biggest issue we face is uncertainty. There are many examples of unexpected disastrous episodes of bad weather, very recently in California, like in Turkey and Greece last year or in Portugal in 2017. This is one of the aspects which will affect us – unexpected events. If I’d given this speech five years ago, I wouldn’t have raised the issue that we might go two million tonnes short in any one year. Our industry is incredibly good at producing more than it forecasts rather than less. Today, such outcomes occur more and more frequently, with an increasing impact on the volumes produced and processed. We need to be conscious of these factors.”

“Another enormous factor is the availability of water, about which very few people are talking. Generally, this subject is mentioned about California, as everyone knows the big limitation of production in California is the lack of water. For our crop, maybe less so, because typically what happens, if California is short, it doesn’t really affect tomatoes that much; it affects the costs of production. California has actually had quite a lot of rain and snow in the last couple of years, while in Iberia, conditions are extremely dry and unless getting a wet winter this next year, Spain and Portugal are again going to face a problem like they did at the beginning of last year – crop will be short of water. There are many other places around the world where water is increasingly going to be a problem: in Chile, the industry is also very dependent on snow in the mountains.

As for market outlets, our industry must ask itself a set of important questions: Why has our market stopped growing? Why is our product a “boring product”, an old product? Why are people not particularly interested in tomatoes, although everybody wants to eat avocadoes? It is important that we analyze how the market has changed. Many years ago, there was a period where the marketing, the sales, the push to increase consumption was largely carried out by large multinationals who were pushing these products to the consumers. Now large food brands are facing significant problems – the ability to sell the same product year in year out to the consumers is more and more difficult. How can we break this cycle? As some processors of our industry – but also from other sectors – have shown, there are probably many ways to break out of a cycle, to do something which is different, to use different technologies to reach the consumer. It is that serious, that unless we do something, a number of us will go out of the business unless the market continues to grow. California has that enormous focus that there is too much capacity and that it has to be reduced, and we all face the same challenge in adapting our capacity to the actual market. This is a fact; we cannot – we should not – try to hide from it.” 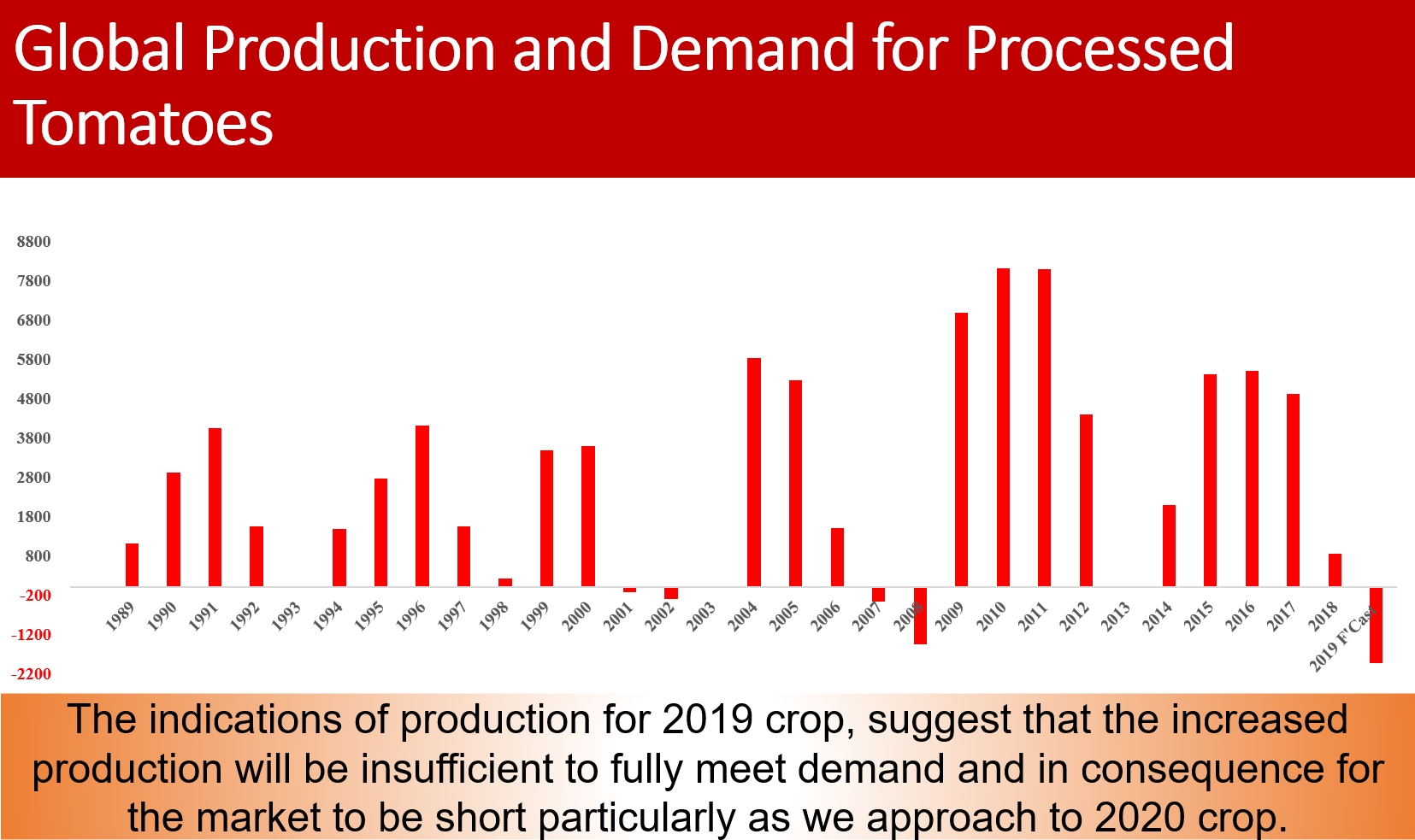 “Regarding the 2019 season, it seems the latest forecast is in fact optimistic: if consumption is just under 38 million tonnes and we produce what we’re forecasting at the moment, which is around 37 million tonnes, the market will go short – but “short”, to put things in perspective, does not mean that we are expecting to see a repeat of the extreme and dramatic situations of shortage experienced in 2008. “Short” means possibly that instead of having stock until the end of September next year, our industry will have stock until the end of August or the middle of August, which is a somewhat different thing.
But it is certainly better than the previous position which we had where we had two or three million tonnes more than the market needs.”

Link to the PDF file of the presentation given by Mr Martin Stilwell at the Tomato News Conference in Avignon, on 16/17 May 2019,
Related events