To borrow the expression used by the Chairman of the Tomato News Board, Martin Stilwell, in his opening editorial of our Yearbook 2020, the tomato processing sector “clearly had a surge of imports” during the pandemic crisis which has hit the world since last spring. More specifically, it was during the months of March and especially April 2020 that processing countries encountered a spectacular rise in demand for deliveries.

During these two very particular months, imports of pastes to the twenty most dependent countries – in other words those whose domestic consumption depends solely on external supplies, therefore excluding countries that are also processors such as Spain, the USA or Brazil – increased by 22% (+57,000 mT of finished products) compared to the March-April 2019 period, and by 26% (+66,000 mT) compared to the average for the March-April periods of the three previous years (2017, 2018 and 2019). To quote a few figures, total volumes delivered to Germany, the UK, Japan, the Netherlands, etc. in March-April 2020 amounted to more than 317,000 mT of finished products, while they amounted to “only” 260,000 mT in 2019 and 250,000 mT over the same period from 2017 through 2019. 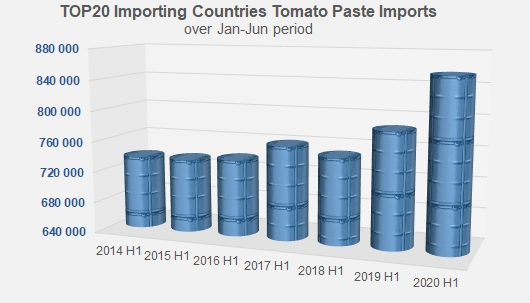 The 20 main importing countries, listed by order of volume over the period considered: Germany, United Kingdom, Japan, Netherlands, Russia, France, Poland, Saudi Arabia, Mexico, Belgium, Canada, Sweden, South Korea, Austria, Philippines, Switzerland, Romania, Kazakhstan, Thailand and Norway
The most significant accelerations in imports were recorded by Austria, Thailand, Romania and Norway, in particular due to the relatively modest quantities (between 6,000 and 15,000 tonnes per year) imported by these countries over the reference period of 2017-2019. For countries whose supplies usually absorb larger quantities, the increases were more measured but nevertheless reached remarkable levels: 12% for Germany (+16,100 mT), 22% for the Netherlands (+14,700 mT), 17% for the United Kingdom (+13,700 mT), 10% for Japan, 16% for Saudi Arabia, etc. 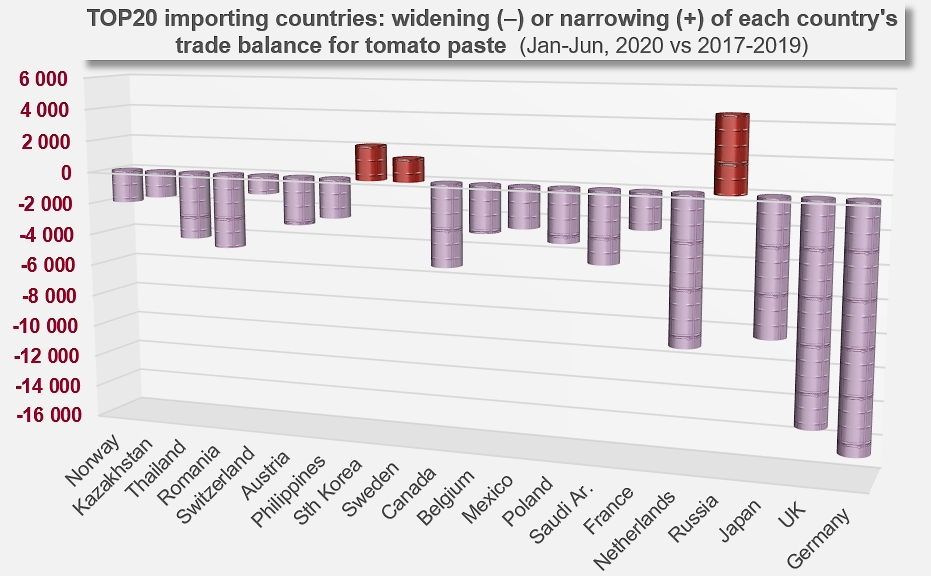 During the first six months of the year, the trade deficit of the main tomato paste importing countries clearly accentuated.
This sudden acceleration of demand for products increased the pressure already bearing down on the quantities available in processing countries, but not all of these benefited to the same extent from this unforeseen episode. Continuing on from the conditions of the marketing year up to that point, the sudden changes in the pace of supply (compared to average levels for the three previous years) mainly benefited Spain (+52,000 mT, +27%), Italy (+51,500 mT, +14%), Portugal (+13,700 mT, +10%), Chile (+32,200 mT, +55%) and Turkey (+10,300 mT, +17%). The latter two countries of that list particularly increased their foreign deliveries over the March-April period.
However, on the same basis (comparison of monthly operations in 2020 with those of the three previous years), the jump in sales recorded during the spring did not really benefit either the United States or China. In both cases, despite a slight upturn in March-April, the performance of the first semester was significantly lower than it was during the same period between 2017 and 2019. Foreign shipments of US products fell by more than 11,000 mT, while those from China fell by more than 16,000 mT. 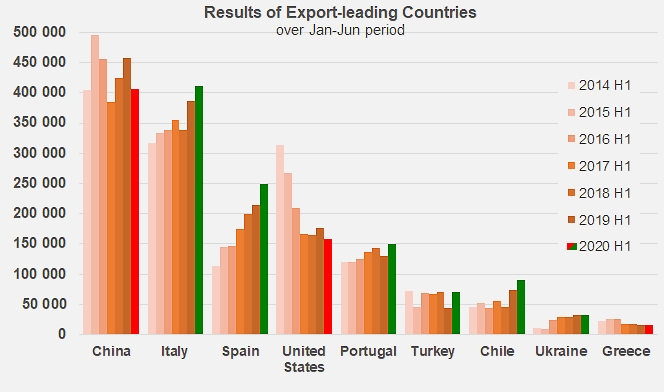 This sudden acceleration in demand has had and will undoubtedly have an effect on the quantities available in inventories. The tense situation already commented in May 2019 during the Tomato News Conference in Avignon was more than confirmed even before the start of the current 2020 season, while “rationing” measures appeared everywhere around the world on supermarket displays last spring. As for the season that is currently coming to an end, it should not bring any big changes in the dynamics that have prevailed over the past eighteen months, with processed volumes corresponding approximately to annual consumption estimates.

Beyond the usual variables for the current marketing year, the big unknowns for our sector to date remain linked to the pandemic, its duration and its intensity and, hence, to its possible impact on global demand and on the resulting social, economic, industrial and local agricultural consequences. It has been a long time since the agricultural and industrial partners of the various sectors around the world have had so little visibility and will have such great difficulty in planning for the next season.

Some complementary data
Comparison of total monthly imports from TOP 20 countries between 2014 and 2020. 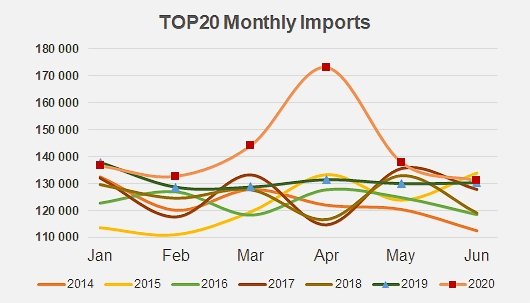