According to the Guardian (17 April), tomato ketchup, handbags and video game consoles are among the imported US products facing EU tariffs, as the European block hits back in the latest twist in the transatlantic dispute over aircraft subsidies.

The European Commission threatened to impose tariffs on US imports worth USD 20 billion (EUR 17.8 billion) on 17 April, publishing an 11-page catalog of items at risk, which also included aircraft and tractors, following a World Trade Organization ruling against Washington last month.

In the case of ketchup, these measures are mostly symbolic, like the products targeted in the reverse direction by the US administration (cheeses, champagne, olive oil, oysters, etc.): the quantities of US ketchup imported into the European Union are minimal, amounting to about 6 200 metric tonnes (mT) of finished products on average over the past three years, whereas they reached approximately 14 000 mT at their peak during the period running 1999-2001. 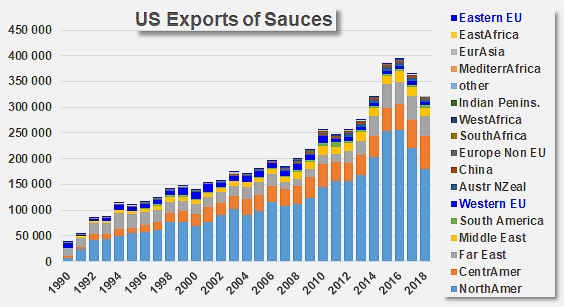 The EU was responding after Donald Trump last week issued a seven-page list of European products to target for tariffs, from large aircraft to dairy products and wine, to counteract USD 11 billion of harm the US government claims have been caused by subsidies for plane manufacturer Airbus.

Some complementary data
Since the peak in trade flow between 1999 and 2001 and then again between 2008 and 2010, the quantities of sauces and ketchup exported by the United States to Europe have greatly decreased. The main outlets for these products in the EU remain the United Kingdom and Sweden, which absorbed between 75% and 85% of incoming products over the past four years. Except for a very small number of markets, other European countries are not affected by these exchanges. 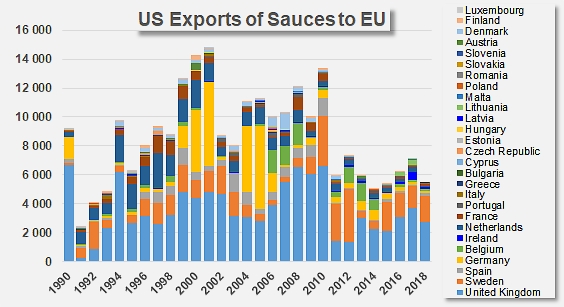