For the US tomato processing industry, the 2017/2018 marketing year ended on a disappointing result in terms of turnover from export operations. The trade crisis that is currently affecting the worldwide industry is largely to blame for the contraction in value of exported products observed throughout the main processing regions, but US foreign trade has continued to suffer from the handicap of the relative strength of the dollar and a sluggish worldwide commercial context.
The total value of tomato products exported to the United States between 1 July 2017 and 30 June 2018 (*) amounted to slightly less than USD 675 million. This result brings the US industry back to the performance level of the 2012/2013 marketing year, and is 10% lower than the previous year's turnover (USD 751 million), with a 14% drop compared to the average of the three previous marketing years (USD 782 million) (2014/2015, 2015/2016 and 2016/2017). 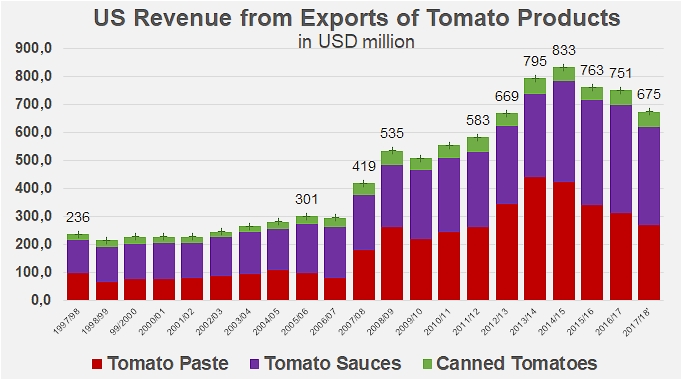 As usual, canned tomato exports only accounted for an anecdotal proportion of the total figure (less than 8%, which is nonetheless a slight increase), with USD 53 million generated by foreign sales, mainly shipped to Canada and, to a lesser extent, South Korea, Japan, Mexico, Taiwan and Honduras. For information, the average turnover generated by canned tomato exports over the past three marketing years did not exceed USD 48.9 million and only accounted for slightly more than 6% of the total income generated by US exports of tomato products. But this category is the only one to record positive growth in terms of turnover in recent marketing years.

Tomato paste does not represent the basis of US foreign trade operations, unlike the business model of several other major exporting countries. Although these products absorb most of the raw materials used by the processing industry and processed for export, the turnover generated by foreign sales in this category in 2017/2018 (USD 269 million) only accounted for 40% of total revenue for the year. Actually, the result of the past marketing year is a sharp drop compared to the result of 2016/2017 (USD 313 million, -14%) and compared to the average of the three previous marketing years (USD 359 million, -25%).
The contribution of tomato paste to total revenue generated by exports has indeed decreased considerably over the past five years, from 56% in 2013/2014 to 45% in 2015/2016 and 40% last year. Along with the dip in worldwide prices, the notable decrease in export volumes explains the drop in turnover. The volumes involved dropped from 540 000 mT of finished products in 2013/2014 – historically the best US performance in this category – to 401 000 mT in 2015/2016, and dropped again during the following marketing year. In the final count, despite a currency exchange rate that was slightly more favorable to the competitiveness of US products between summer 2017 and spring 2018, the volumes of paste exported lost a further 54 000 mT approximately over the marketing year 2017/2018. Over those twelve months, the US industry, mainly in California, exported slightly more than 350 200 metric tonnes (mT) of pastes (against 403 700 mT in 2016/2017). 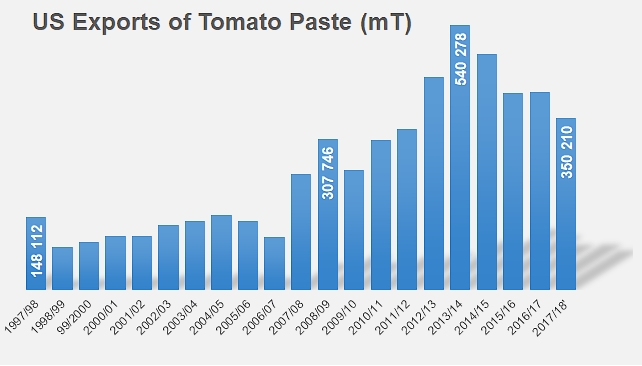 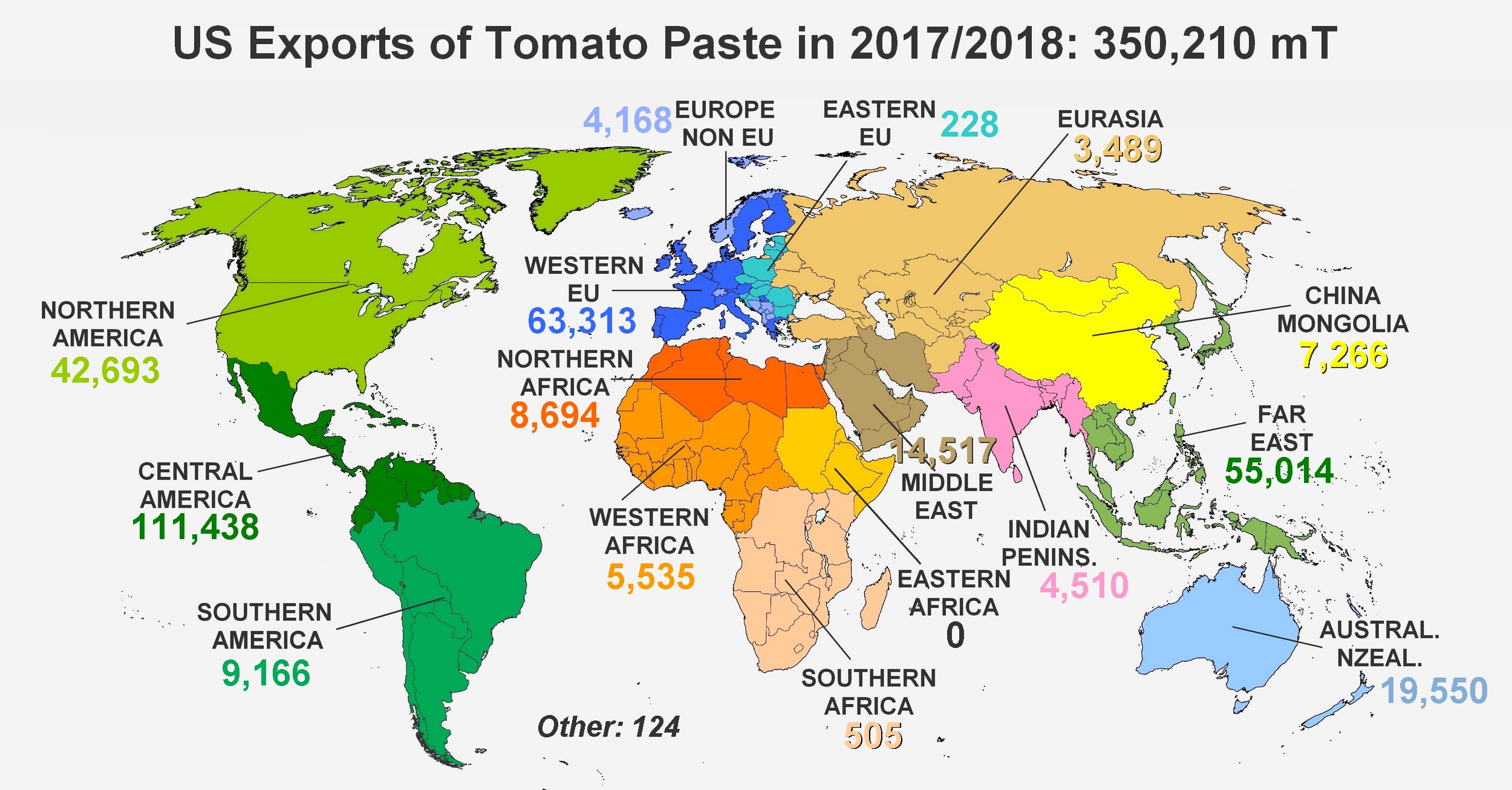 Before the spectacular development of paste exports after 2007/2008, the turnover generated by US foreign sales of sauces accounted for up to 60% of the total revenue of export operations. Temporarily displaced to second place, revenue generated by exports of sauces has finally come back in force after the trade difficulties that hit the US industry, which is being negatively affected by domestic consumption, caused it to downscale for a time its ambitions in terms of paste sales to foreign markets. At the peak of paste export operations, in 2013/2018, the USD 295 million generated by foreign sales of sauce only accounted for slightly more than one third of the total turnover generated by foreign trade. In 2017/2018, with USD 352 million, sauce exports accounted for more than half (52%) of the total US result generated by exports, despite a notable fallback compared to the previous marketing year (USD 386 million) and to the average of the three previous marketing years (USD 375 million).
This slowdown in financial results is a direct reflection of the drop in dynamics for the industry's export operations, but it actually hides a predictable adjustment following the spectacular takeoff of volumes and turnover over the previous three or four marketing years (from 2013/2014 to 2015/2016). This exceptional progression, which occurred alongside the development of paste exports, gave way in 2016/2017 and in 2017/2018 to more "reasonable" results in terms of volume, directly matching the dynamics that drove the industry after the mid-90s. After peaking at more than 388 000 mT of exports in 2015/2016, foreign sales of sauces dropped slightly, recording approximately 348 000 mT in 2017/2018.
US results for the sauces sector are very dependent on Canada as a trade outlet, which absorbed more than 63% on average of the volumes exported over the past five marketing years (and more than 203 000 mT (58% of the total) in 2017/2018). Central American markets are also essential for the US sauces sector, as it has shipped 50 000 mT of sauces to that region on average over the past five marketing years and more than 60 000 mT in 2017/2018 (which is more than 17% of total trade in this category).
Purchasing 12% of the total volumes exported by the USA, Japan represents a historic and valuable outlet for US sauces. In 2017/2018, more than 43 000 mT of finished products were shipped to the ports of Japan, Korea, Taiwan, etc.

Some complementary data
(*)Note: The US marketing year for tomato products officially extends from 1 June to 30 May, but worldwide official statistics are supplied for the period running 1 July to 30 June, so there is a chronic one month discrepancy between our figures and reality.

Evolution of US exports of tomato paste over the past five marketing years, toward the six main outlet regions 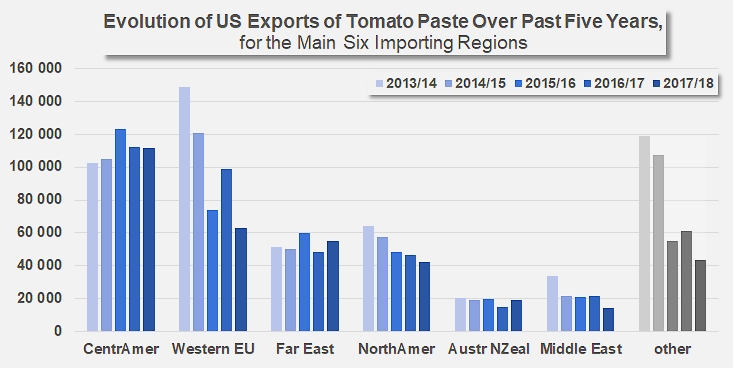 Evolution and distribution of US tomato paste exports since 1997/1998 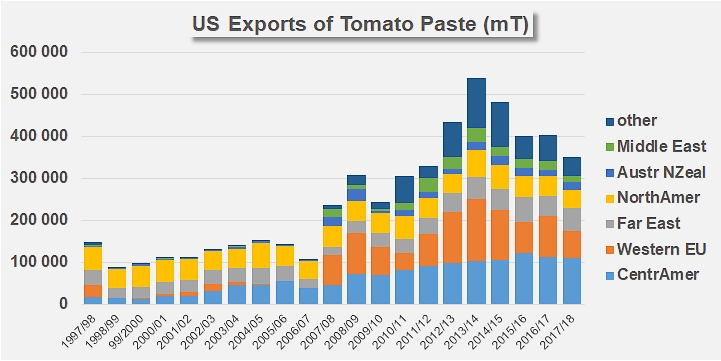 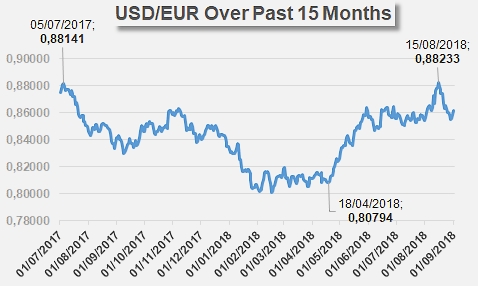 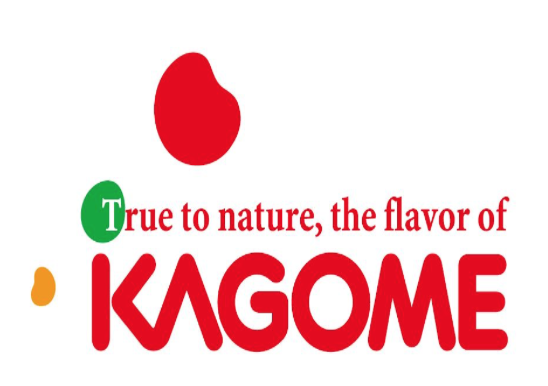