Italy: a third consecutive year of decreases for prices in 2017
The long hoped-for recovery of tomato product prices during the "2017 harvest" will have to wait: among other reference indicators, the quotations published by the Parma Chamber of Commerce on 6 October indicate a further contraction in euro prices, though it is less marked than the drops observed in October 2015 and October 2016. However, it contributes to bringing down the value of European products, below the levels that the industry already considered as extremely low last June at the end of the previous marketing year. 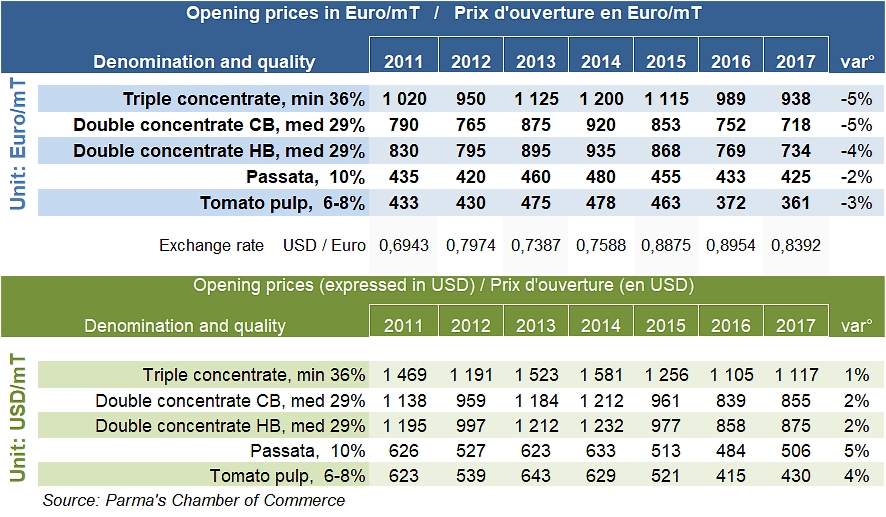 The drop recorded this year has eroded Italian opening quotations for 2017 by about 4% compared to those of last year, whereas previous marketing years had already recorded drops of 12% and 6% compared to opening quotations of 2015 and 2014. In other words, Hot Break 28/30 Italian paste in drums offered at EUR 935/mT in October 2014, then at EUR 868/mT in October 2015, is currently quoted at EUR 734/mT (actually between EUR 703 and 765/mT), which is EUR 200 less than its best level three years ago, but also EUR 35 less (-4.5%) than in October 2016. These same dynamics, which are more or less accentuated, have had an impact on other product categories, which have also lost several dozens of euros: triple-concentrated paste is quoted between EUR 890 and 985/mT, Cold Break double-concentrated paste between EUR 693 and 742/mT, passata between EUR 380 and 470/mT and pulped tomato between EUR 343 and 379/mT. Shifts in the EUR/USD exchange rates in recent months have led to a slight recovery in the value expressed in USD, from 1% to 5% depending on the product category, consequently causing a possible loss of competitiveness for European products on the worldwide markets.

2017 opening prices in Italy are very close to the latest euro quotations for the 2016/2017 marketing year, which were published early July. They also remain considerably higher than those of competitors in China or the US, but also in Spain, where competition has been deemed particularly aggressive by a number of experts in recent months, to the point of sometimes practicing "really crazy prices before the beginning of the season, […and which remain] still quite far from the minimum levels required to have some sustainability of the business."
It is also important to note that the same downward trend has also affected exports from other major production regions (for example, -2.5% to -3% on USD quotations for US 28/30 paste in bins, -7% to -9% on USD quotations for Spanish 28/30 paste, -1% to -2% on Chinese 28/30 paste, etc.). As for US exports, a CTGA release explained at the beginning of September that "paste exports for last year were very similar (-1.5% reduction) to the previous year in total movement (2.73 million against 2.78 million short tons (raw material equivalent)). The major difference was in the price received by the sellers. The overall price received for all paste exports was down by approximately 10%. On a positive note, there has been some weakening of the Dollar against the Euro that has taken place since December, when the ratio was USD 1.04 to EUR 1, to the current exchange rate of USD 1.19 to EUR 1. While this is not back to previous Dollar/Euro exchange rates, it is trending in the right direction that may help us move some greater volumes in the export markets.” This summer, another professional source pointed out that “California did stimulate exports because of old inventories 2014-15 at very aggressive prices. Those inventories are nearly gone and now California is marketing the balance of the 2016 pack and starting on the 2017 pack." » 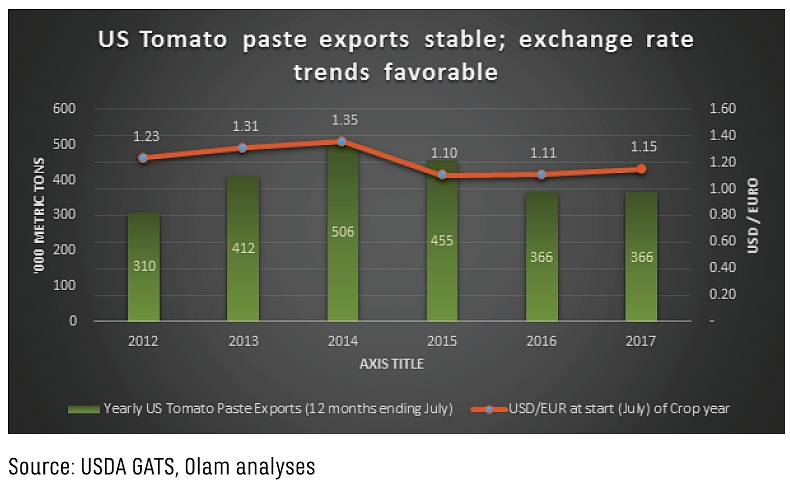 Finally, the very small difference in price between Cold Break and Hot Break pastes seems to be confirmed as a long-term feature, as it can now be observed throughout the world's processing regions. In Italy, after prices almost converged at the end of the 90s, the price for Hot Break paste actually underwent a clear consolidation compared to Cold Break products between 2009 and 2011. The difference in price between these two qualities then quickly dwindled, to the point of varying around a very small value (close on EUR 16/mT) for about four years.

As an article in the specialized press recently pointed out, "the prospect of a drop in the price of tomato paste is not a surprise for operators in this sector, insofar as the most widely sold tomato product around the world is subjected to the effects of a highly competitive environment." This observation has been confirmed as global demand has hardly grown in the past few years. In a context where US foreign sales have been less disadvantaged by the strong value of the Dollar than in previous marketing years, the hypothesis of stabilization or even a development of US exports and a notable deflation of US paste-for-sale inventories remains a credible scenario. For the time being, it does not however seem that the pattern of EUR/USD exchange rates has had much influence on preliminary contracts or on the balance of trade dynamics affecting the world's biggest processing regions. But the situation could evolve at any moment, influenced by the constant desire of the Chinese industry to reduce its inventories, which have been inflated by the strong harvest in 2017 (5.94 million tonnes).
Indeed, the specialized press recently revealed that the Chinese tomato processing industry is facing huge difficulties owing to various factors: intense competition from European industries, higher than expected crops and a flat market while dealing with large stocks. According to preliminary results published by the WPTC, the harvest was extended into October, and China’s tomato production is projected at 5.9 million tonnes. However, some experts say the figure could be much higher – in any case, a level that will not help to ease the situation for the Chinese industry.

European price levels, and especially Spanish ones, are a cause for concern for Chinese processors, as they have reached very low and competitive values in recent months, making operators in China and elsewhere wonder about the profitability of these competing offers. Local professional sources state that some 36/38 Brix products have been offered at an average price significantly lower than the threshold of USD 800 /mT usually considered as actually profitable within the industry.