With a total turnover in 2018 of EUR 231 million, the value of Portuguese exports dropped slightly last year, down by just under EUR 7 million (-2.8%) compared to 2017, and by just under EUR 3 million (-1.1%) compared to the average performance of the three previous years (January-December, 2015, 2016 and 2017).
The paste category, which is the biggest contributor to this result with 85% on average of the total volume of foreign operations, has resisted fairly well to the crisis and only suffered a very small drop (0.9% compared to 2017 and 0.4% compared to the three previous years). This performance (EUR 196 million) should nonetheless be kept in proportion, insofar as Portugal's foreign sales of pastes recorded a volume increase of over 10% in 2018, with more than 272 700 mT exported last year, against only 260 500 mT in 2017. So this good result in terms of quantity is canceled out by the notable deterioration of the average unit price of the products.
Both other category segments were considerably more affected, with results dropping 1.8% compared to the three previous years for exports of sauces and ketchup and dropping 10.7% for exports of canned tomatoes. For the sauces and ketchup category, the result generated by exports (34 900 mT) amounted to approximately EUR 23.8 million in 2018. For the canned tomatoes category, the result did not exceed EUR 11.6 million last year, a sharp drop compared to the EUR 14.4 million achieved in 2017 with 36 000 mT exported. 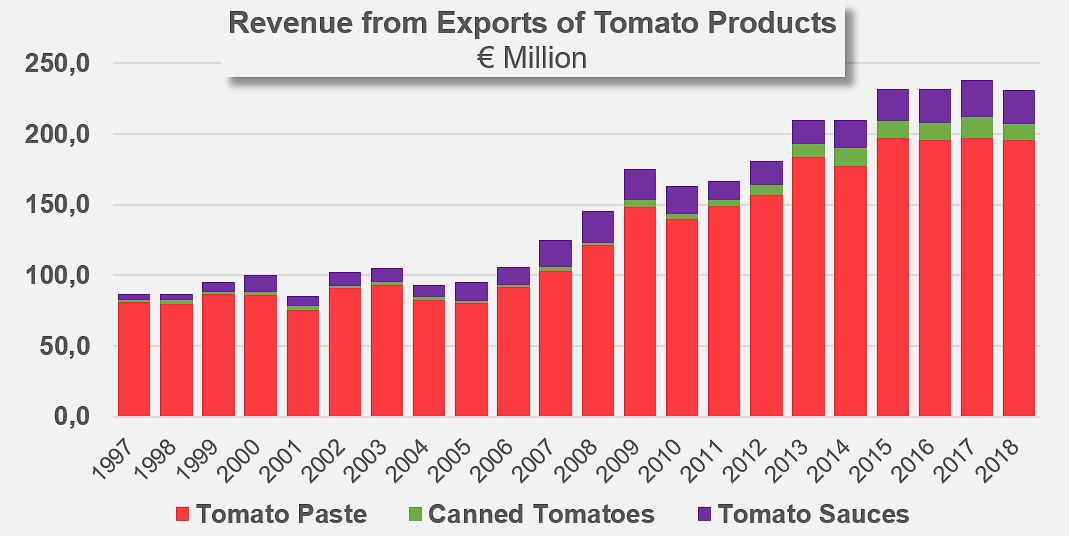 Most of the pastes exported by the Portuguese industry were shipped to destinations within the European market, although the accumulated volume delivered to destinations of this region accounts for a progressively smaller proportion of Portugal's total operations. These outlets absorbed close on 71% of total volumes of pastes exported over the past three years (against 82% at the beginning of the 2000's), thereby "guaranteeing" a degree of stability to the foreign operations of the Portuguese industry. The main group of destination markets for Portuguese pastes also includes the Far East, the Middle East and the eastern part of the EU.
In 2018, western EU countries bought slightly more than 193 200 mT of Portuguese paste, which is 6% more than in 2017, but more importantly, 11% more than during the three previous years. This sudden increase (19 600 mT) mainly stems from the intensification of British purchases over this period (70 300 mT), which were 5% up on 2017 volumes and 19% up (+11 400 mT, due to Brexit) compared to the volumes shipped during the period running 2015-2017. It also is the result of an unexpected two-fold increase in Italian purchases and notable increases or adjustments in the exports shipped to Belgium, the Netherlands and Spain.
A few notable adjustments were also recorded for trade flows to the Japanese market (-12% compared to the previous year, but +6% compared to the average of the three previous years, with 29 100 mT in 2018). The markets of Oman and the Arab Emirates sharply reduced their purchases of Portuguese pastes in 2018, while conversely, exports to Poland recorded a notable increase last year. 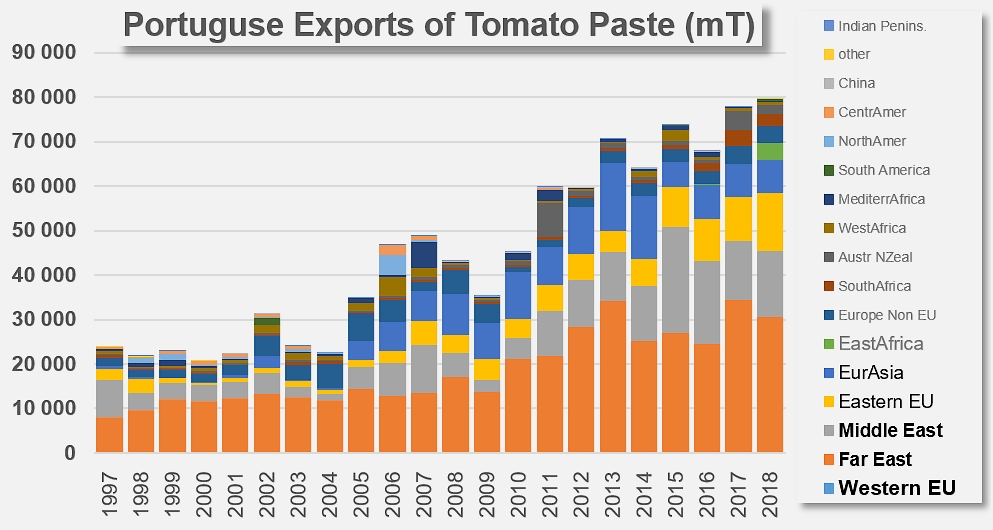 The Portuguese industry is also active in the tomato sauces and ketchup sector, though to a lesser extent than its European "neighbors" and competitors in the Netherlands, Italy and Spain. With slightly more than 36 000 mT of finished products exported on average over the past three years, the volumes involved are far smaller than foreign sales of pastes. The development of Portugal's sales of sauces has been fairly rapid over the past 20 years, despite a few years of adjustments, with volumes increasing at an average annual rate of approximately 9%, from 6 000 mT in 1997 to close on 35 000 mT last year.
The Portuguese performance on the export market of sauces and ketchup in 2018 recorded a slight drop compared to the previous year, with a decrease of a few hundred tonnes of finished products compared to the average of the period running 2015-2017, and of slightly more than 3 200 mT compared to 2017.

Even more so than for the paste category, foreign sales in this segment were focused solely on European markets: 97% of the volumes exported by Portuguese operators are shipped to countries of the EU, mostly the United Kingdom, Germany, France, etc. 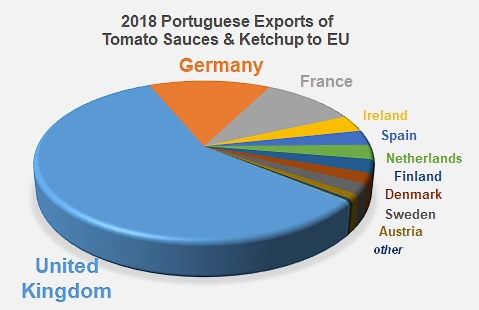 Given the weight on the global level of competing industries in Italy, Spain, the US, even Greece, for this canned tomatoes sector, Portuguese operations are relatively discrete. With 32 700 mT shipped last year, the volumes exported by Portugal in this category have, like the sauces and ketchup category, recorded a slight contraction compared to results for 2017 (-3 300 mT, -9%). Conversely, 2018 volumes recorded a notable progression (+5%) compared to the average for the period running 2015-2017, indicating that the decrease observed compared to the previous year may only be a marginal adjustment, in a particularly dynamic context that has seen foreign sales grow at an exceptional annual rate of 19% for the past 11 years.
In this sector also, the European focus of Portugal's foreign trade is undeniable: more than 93% of the volumes exported are shipped to countries of the EU, particularly to the British market, but also to a lesser extent to the markets of Spain, Germany, Poland, France, etc. 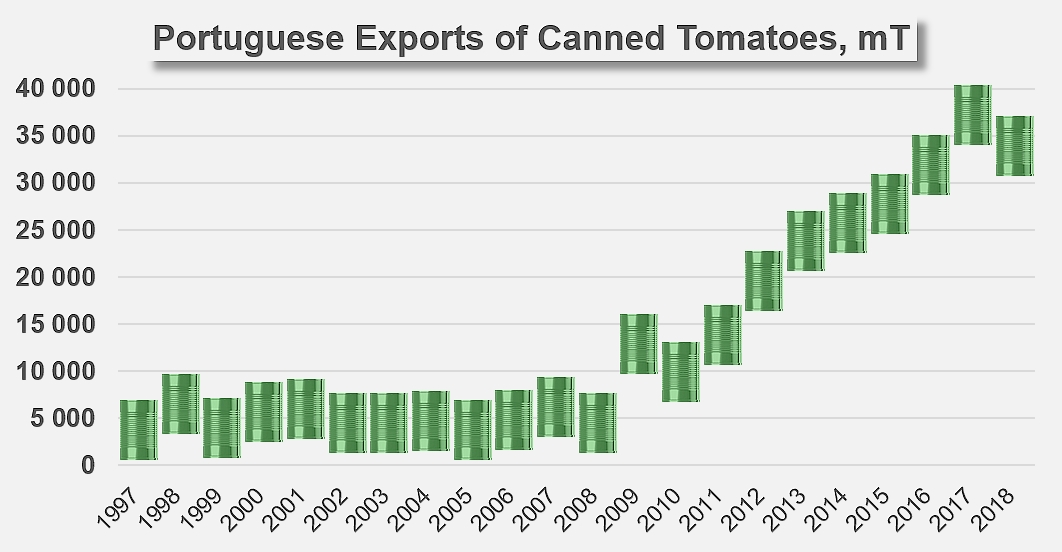 Some complementary data
Breakdown of Portuguese exports of tomato paste, by category 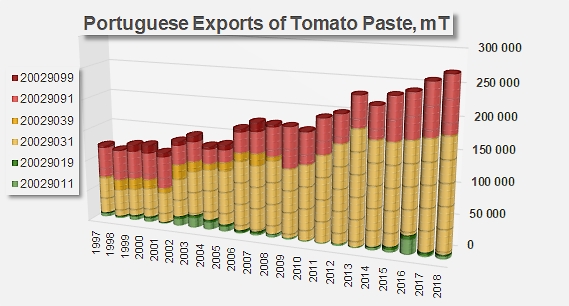 Most part of revenue from exports of tomato paste are coming from Western EU. 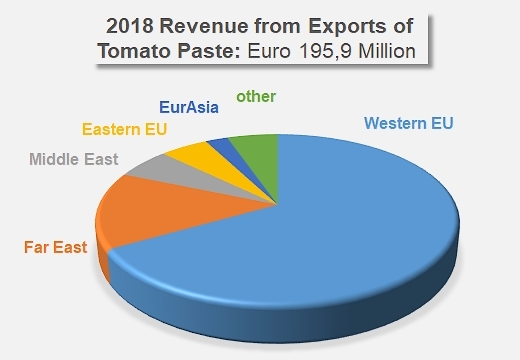 97% of exported quantities of tomato sauces and ketchup are sold to EU countries. 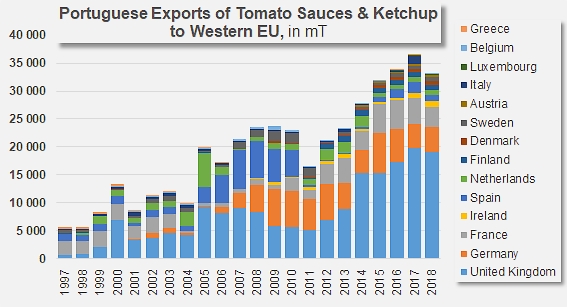