Ketchup: Is the global market in decline?

18/11/2019 - François-Xavier Branthôme - Lire en français
The barycenter of the world market is shifting, in a context of sluggish growth

Over the past five years (from 2014/2015 to 2018/2019), world trade in ketchup and other tomato sauces has confirmed the pre-eminence of three countries that lead the global export sector: the United States, the Netherlands and Italy. These three countries alone provided more than half (52%) of the world's supplies to the sector, supported by a few smaller countries (Germany, Spain and Poland for a total of about 15%), and by a small number of secondary countries (Belgium, Portugal and China for just over 8% of the total). Eighty-four other countries (about a quarter of total movements) also operate on this market of about 1.3 to 1.4 million tonnes of finished products.

In terms of destinations, four countries stand out for their large import volumes: over the same period of time, Canada, the United Kingdom, France and Germany absorbed almost half (49.8%) of the quantities involved. Far behind, quantities entering Mexico accounted for only about 4% of total trade. Approximately 15 countries imported between 15 000 and 35 000 tons of finished products on an annual average, each of which absorbed between 1% and 2.7% of the exchanges. Seventy-six other importing countries totaled about 22% of overall trade (see the distribution diagram in the appendix to this article). 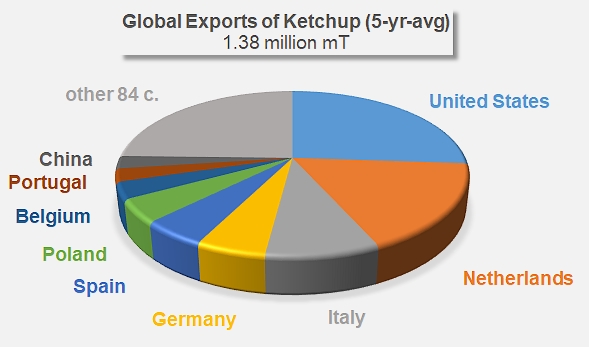 The value of exported products has not varied much over the past five years, hovering around an average of about USD 1.7 billion. In other words, industrial operators in the ketchup industry have been confronted over the past five or six years with a dramatic slowdown in the value dynamics of global ketchup exports. From 1998/1999 to 2013/2014, driven by strong growth in quantities and good market prices, the sector's worldwide turnover had steadily increased from approximately USD 312 million to USD 1.7 billion, at an annual growth rate of about 12%. Over the following marketing years, which led to the result of USD 1.679 billion in 2018/2019, average annual growth has been negative, at approximately -0.33%.

The causes of this slowdown may lie in a possible disaffection of consumers for products in the ketchup category. Although world trade figures only give a partial picture of the recent characteristics of consumption, since they only account in an approximate way for domestic consumption in the main productions regions (North America and Europe), overall results for the 2018/2019 marketing year leave no doubt as to the persistent sluggish growth in the volumes of world trade in this sector. With an average growth rate of more than 6% per year over the sixteen years between 1998 and 2014, growth in trade has sharply slowed over the past five years. Rather than record nearly 1.67 million tonnes of sauces and ketchup last year – a level that would likely have been achieved if growth had simply continued at the same pace, global trade "only" reached 1.38 million tonnes in 2018/2019, which is 1.3% lower than in 2017/2018 and 0.2% lower than the average of the three previous years.

Explanations for the drop in value of world trade are also to be found in looking at market constraints and commercial strategies, since the "slow growth" of volumes (CAGR +0.68% over the period 2014/2015–2018/2019) was coupled with a worldwide price contraction (CAGR -1% over the same period). 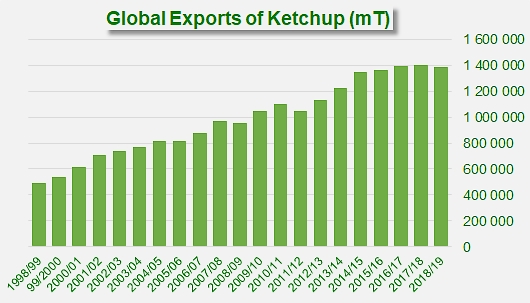 In recent weeks, both specialist and mainstream media have reported a significant reduction in the foreign sales of US operators, who have been world leaders in this sector for many years (26% of total exports over the past five years). Their activities in 2018/2019 (307 200 mT) were down 12% year-on-year (349 200 mT) and almost 18% below the average of the three previous years (373 800 mT). The main reason for this dramatic decline is a major decrease in Canadian purchases of US ketchup over the last four to five years, from about 258 000 mT in 2015/2016 to less than 160 000 mT last year. But this significant drop is no doubt mostly the consequence of anti-American reactions following the pressure exerted by the Trump administration to renegotiate the North American Free Trade Agreement (NAFTA), facilitated by the development of Canadian domestic production, rather than the effect of a real drop in consumer interest for products in the sauces and ketchup category. At the same time, a few other countries (South Korea, the United Arab Emirates, the Philippines) made minor adjustments in their supplies, but their proportional importance remains anecdotal in the context of total US operations. Conversely, the results for fiscal year 2018/2019 for destinations such as Mexico, Chile, the Dominican Republic, Israel and Libya show impressive increases in quantities exported by US operators.

But the final performance of US foreign sales in 2018/2019, remains below that of previous years, and weighs heavily on global results. Various explanations have been put forward by the experts, including an unexpected effect of climate change and heatwaves that may hinder the consumption of hot or fried dishes, and the sauces that are most often associated with them.
US exports of sauces and ketchup may also have been penalized by the relative strength of the US dollar against the currencies of importing countries, a proven impact that has already been mentioned as an explanation for the difficulties the US industry is having in boosting its paste exports.
For Cristina Nanni, an analyst with IHS Markit, "younger shoppers are turning to healthy, fresh products instead, as tastes change". The attraction of healthier eating-habits that are more in touch with environmental concerns, and the rise of "super foods" that was extensively commented and explained by the late Maria Nomikos during the last World Congress on the Processing Tomato (Greece, 2018) are decisive factors for the future of tomato products consumption. "Millennials are keener to consume fresh products, organic and superfoods, pulling consumers away from fast food restaurants," adds Cristina Nanni. Ketchup, the flagship product of fast-food chains, is obviously bearing the brunt of this reorientation in consumer preferences. This pattern is so clear that "ketchup giants such as Heinz and Conagra are investing in the launch of organic products, free-from or ranges inspired by teenagers’ celebrities to try and reconquer some market shares among millennials and younger consumers," explained the analyst.

Beyond the reasons related to purchasing behavior, the tomato industry cannot ignore the competition caused by the development of local primary and secondary processing initiatives, as in the case of the global paste trade. It is important to distinguish between the recorded slowdown in performance of the world's leading countries for the sector and a drop in overall consumption, which has yet to be demonstrated. "Information collated by IHS Markit's Agribusiness Intelligence suggest that in some countries, the ketchup market has been taken over by local producers who import tomato paste to produce their own sauce, fuelling tomato paste demand," says Cristina Nanni, with the Canadian or Russian examples being perceived as a kind of model to be imitated by other countries seeking autonomy in an import category that is much more expensive than the paste category. There is no doubt that many countries that were heavily reliant on external supplies are now producing their ketchup locally, according to national standards that allow them, as in the case of Israel, to limit incoming shipments from the historical processors of the sector. However, the 2018/2019 marketing year did not bring any noticeable change to the sluggish dynamics that have characterized worldwide demand for pastes in recent years. The growth in local ketchup production can only marginally contribute to supporting or boosting the world’s production of pastes.

However, US foreign sales are only part of the overall activity of the sector: other countries with large production industries have also experienced this slowdown. This is particularly the case of the Netherlands, the world’s number 2 in this sector, whose results for the last marketing year (230 000 mT) recorded a moderate drop of 2.6% compared to the average of the three previous years (236 000 mT). To a lesser extent, Portuguese exports have had to face the same problem (-4.8%, from 35 800 mT to 34 000 mT). It is interesting to note that in both cases, some of the most significant declines were recorded for similar destination groups, the most notable of which are Germany, France, Spain and Finland.

Conversely, several countries that are significantly involved in the world market for sauces and ketchup, such as Italy, Spain and Poland, have seen their foreign sales increase significantly in recent years, including to destinations where Dutch or Portuguese competition has faced reduced sales. Without going into detail, this has been the case on markets known to be strategic for the industry, such as the United Kingdom, France, Canada and Germany, but also the United States, Belgium, Saudi Arabia, the Czech Republic, Australia... and more generally in most major consumption areas. So the hypothesis of a shift on the part of consumers to other food products, though indisputable, is not enough in itself to explain the downturn in dynamics recorded around the world. These slowdowns remain highly limited and very largely dependent on the performance of a small number of leading industries. We will find out in future marketing years, which will be decisive and informative, what global patterns will look like in terms of sauces and ketchup consumption. 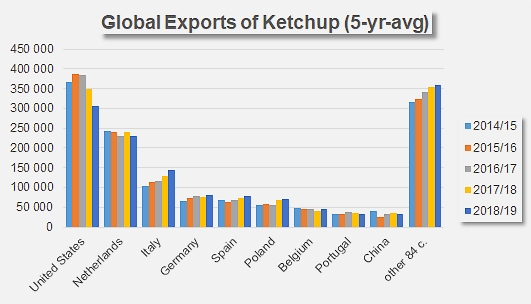 In the final count, it appears that the two countries that have long led this sector – the USA and the Netherlands – have been challenged on the global market by Italian, German, Spanish or Polish operators. Rather than a decline in world consumption, which is not necessarily demonstrated by trade statistics alone, it would seem more appropriate to speak of the beginning of a redistribution in the balance of global supply sources, with a shift of the barycenter towards countries of south-central Europe. This shift is also driven by diffuse but increasingly strong competition from a network of "smaller" exporting countries. For the record, among the "84 other countries" reported as active exporters, special mention should be made of Egypt, Costa Rica, Mexico, Russia, Ukraine, South Africa, Turkey, etc. Most of them operate in a geographically limited commercial sphere, but the joint effects of their global activities are increasingly disrupting the well-oiled game of the major industries of the sector. 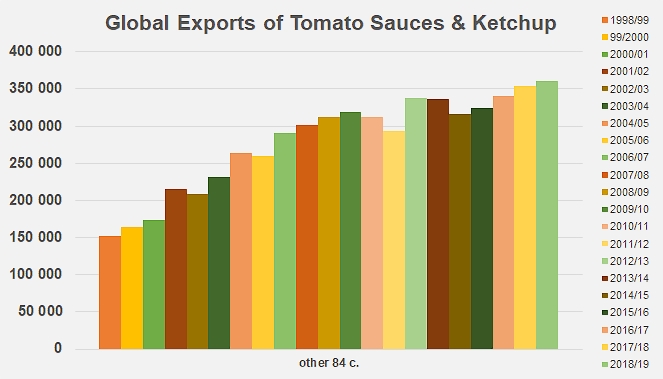 Some additional data
Distribution of major markets for ketchup worldwide 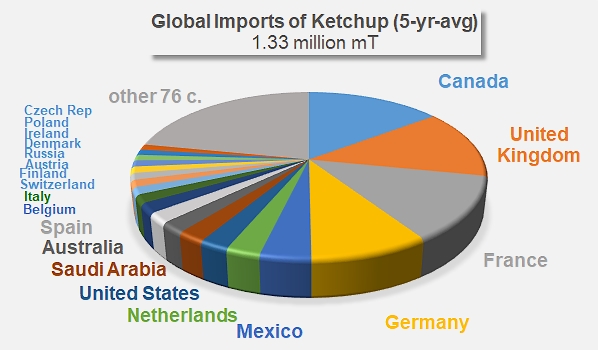 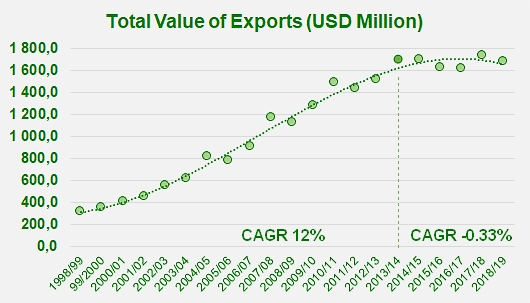