14/02/2019 - François-Xavier Branthôme - Architecture of Trade - Read in French
Twenty years of active trade balance for the "tomato products" sector
In a slightly different interpretation from what has been published by the European Commission (*) concerning the performances of Europe's operators on the tomato products market, it seems that the European Union has for several years occupied a major place – indeed, right at the top of the worldwide ranking scale – among processors and suppliers for the worldwide markets.
Unlike the conclusions of a recent EU report, according to which "the EU is expected to become a net exporter of processed tomatoes by 2030", which tends to indicate that this is currently not the case, or indeed that the EU may be dependent on imports for satisfying its domestic requirements, the trade results of the past two decades clearly demonstrate the real situation of the export vocation of Europe's tomato industry and the reality of surplus volumes in its trade balance.
Since 1997/1998, EU28 results from the "processed tomato" trade in terms of quantity have not once been negative: although the available information shows that the "tomato products" trade balance of the EU28 generally dropped over the first 15 years of the period considered (from 2.5 million metric tonnes (mT) of farm weight equivalent in 1997/1998 to less than 975 000 mT in 2011/2012), it also shows that this later result was a base level from which the European processing industry was able to start rebuilding its trade, in an extremely tense commercial context, and it began to progressively increase its performances over the past six marketing years, taking the surplus of its trade balance to approximately 2.1 million mT in 2017/2018. 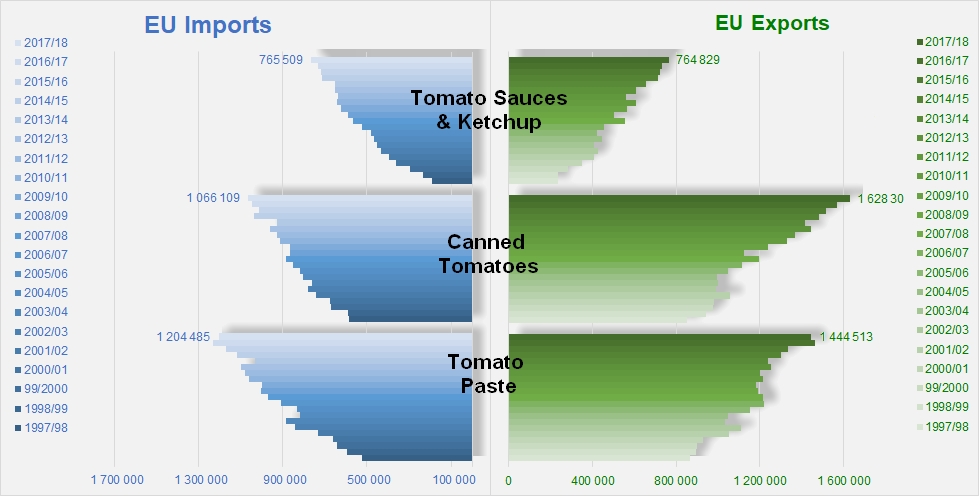 EU: compared exports and imports of tomato products over the past 21 marketing years. The performances presented combine volumes of intra-Community trade and trade with third-party countries.
Components of the surplus trade balance
Taking into account the results of countries that belong to the EU in 2017/2018, without consideration of their EU accession chronology, over these 21 marketing years, the performances of the different product categories have differed considerably and have not progressed to the same extent. Without going into unnecessary detail, it is clear that the worldwide supremacy of the Italian industry in the canned tomato category (peeled, unpeeled, whole, chopped, etc.) has inevitably led to results that have undeniably and consistently contributed to the positive trade balance of that country – and therefore of the EU – in this category: from almost 270 000 mT (finished products) in 1997/1998, Europe's surplus trade balance for "canned tomatoes" progressively deteriorated until its lowest ebb point in 2004/2005 (195 000 mT), before launching into a virtually uninterrupted string of increases driven by the consolidation of the worldwide markets, reaching the record levels recorded during the 2017/2018 marketing year, with a surplus of more than 560 000 mT.
In this category, the importance of the various protagonists explains the sharp dichotomy between the clearly positive results of the historic member countries (EU15) (from 266 000 mT in 1997/1998 to 642 000 mT in 2017/2018) and the chronic (growing) deficit of "new members" (EU 13, accession after 2000) (from -12 000 mT in 1999/2000 to -79 000 mT for the past marketing year).
A similar contrast between industries of very different sizes and callings can be observed in the trade flow of the paste category, for which the performances of the EU15 (Italy, Spain, Portugal, etc.) have long generated a solid surplus in the trade balance (from 344 000 mT in 1997/1998 (for all products, conditionings and contractual modalities) to 378 000 mT in 2017/2018), while the EU13 (Poland, Romania, Czech Republic, etc.) settled into a long-lasting dependence on imports, with a deficit that has been deepening, from -27 000 mT in 1997/1998 to -138 000 mT for the last marketing year.
Considered overall, the results of the EU28 for the period as a whole can be considered positive, with progressive weakening from 1997/1998 until 2011/2012 (less than 122 000 mT surplus), followed by a recovery in trade that ended with a surplus of about 240 000 mT recorded in 2017/2018. 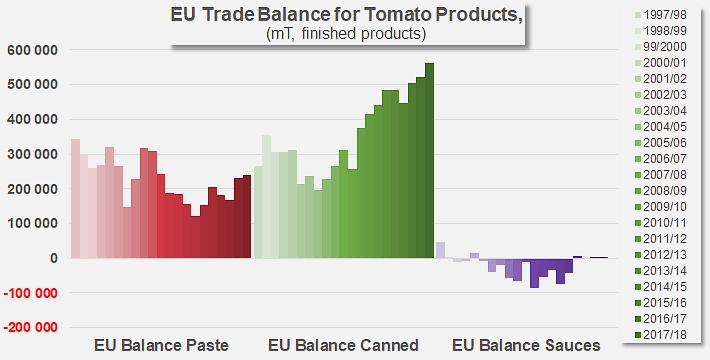 The sauces and ketchup sector represents a particular case for which it is both difficult to identify a regular dynamic and to contrast the geographical and historical blocks that make up the European Union. It can be stated that the European trade balance for the "tomato sauces" category has often been passive over the past two decades, notably from 2003/2004 to 2012/2013, when the quantities involved varied around an annual average of approximately 50 000 mT of finished products.
Unlike the categories of canned tomatoes and pastes, the deficit of the "tomato sauces" trade balance for the EU28 has more generally been caused by several countries that have recorded massive import volumes into the EU15 (United Kingdom, France, Germany, etc.), which have therefore contributed to a notable "regional" deficit (39 000 mT in 2003/2004, 92 000 mT in 2008/2009, 64 000 mT in 2012/2013), whereas the very real but modest export flows of Poland and the Czech Republic generated surplus results for the EU13, though they remained insufficient to compensate for the inflow results driven by EU15 demand. 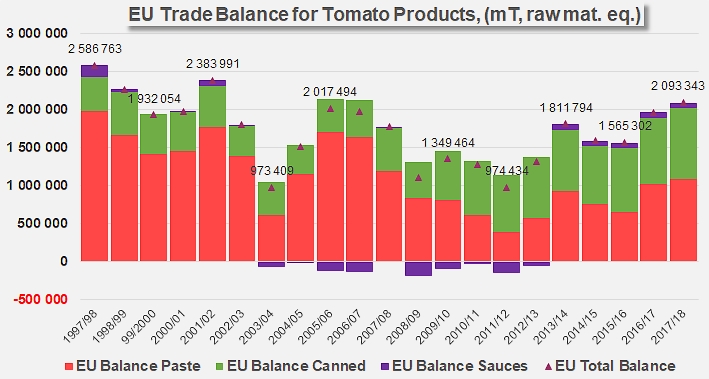 In the end, the surplus of the European trade balance for "processed tomatoes" has mainly been built up over the past 20 marketing years thanks to the paste category – between 1997/1998 and 2007/2008 – then thanks to the canned tomato category – between 2008/2009 and 2017/2018 –, while performances of the sauces and ketchup sector remained excessively variable and marginal in terms of the quantities of raw materials used. For the most recent marketing years, the volumes absorbed by the surplus trade balance more than doubled in six years, growing from less than 1 million tonnes in 2011/2012 to close on 2.1 million tonnes last year.
In the process, the European Union invested into the trade balance surplus of the most recent 2017/2018 marketing year a share that can be estimated at 19% of its total processing activity (11.1 million mT). This proportion has clearly been progressing over recent seasons, but remains lower than its best levels recorded before 2009 (25% in 2006/2007, 28% in 2001/2002), or even before 2000 (38% in 1997/1998) (see infographics at the end of this article).
Exchanges with third-party countries and net trade balance
Processing industry players operating within the EU28 can count on a largely captive market in their attempts to find outlets, particularly in the paste category. The issue of the vulnerability of the European markets to competition from third-party countries is virtually irrelevant for this category of tomato pastes, on which processors from southern Italy maintain a strong grip, with the only competition coming from a few operators, also European, notably in Spain and Portugal.
In the paste category, which accounted in 2017/2018 for more than half (52%) of the raw materials absorbed by Europe's surplus trade balance for tomato products, more than 80% of the 1.2 million tonnes of paste (finished products) imported by EU countries as a whole last year resulted from intra-Community trade. In other words, more than 239 000 mT of paste from outside the EU was brought in to supply EU markets over the latest marketing year (2017/2018). The proportion of the European market that is supplied by products from outside its borders has been higher at times in the past two decades (up to 28%, even 30%, for the period running 2008/2009-2011/2012), but over the past 20 seasons, European processors supplied on average 77% of domestic requirements.
At the same time, these same European operators shipped on average slightly less than three-quarters (73%) of their export volumes to destination markets within Europe. The proportion of European exports absorbed by the domestic market has actually increased almost regularly over the past 20 years (71% of total exports in 1997/1988, 79% in 2017/2018). That said, European processors have therefore dedicated an average of 27% of their paste exports to third-party markets, which amounts to slightly more than 304 000 mT of finished products for the 2017/2018 season.
Over the past 20 marketing years, Europe's foreign trade balance for the paste category (i.e. shipments to third-party countries only) has varied greatly, affected by the competitiveness of its products in the face of competition from China, the USA, etc. Although it has been largely active on its own territory, the trade balance of the European tomato processing industry has been less clearly active (or only irregularly so) on foreign markets, and at one point, over a period of three years that were particularly difficult in industrial and commercial terms (2009/2010, 2010/2011 and 2011/2012), the trade balance barely found its equilibrium, and even dipped into being passive for a short time. After this episode, which also saw a major shift in worldwide dynamics for processing and trade, the European industry was able to once again impose its products on foreign markets, but never managed to recover the surplus levels that had preceded the 2009/2010 crisis. 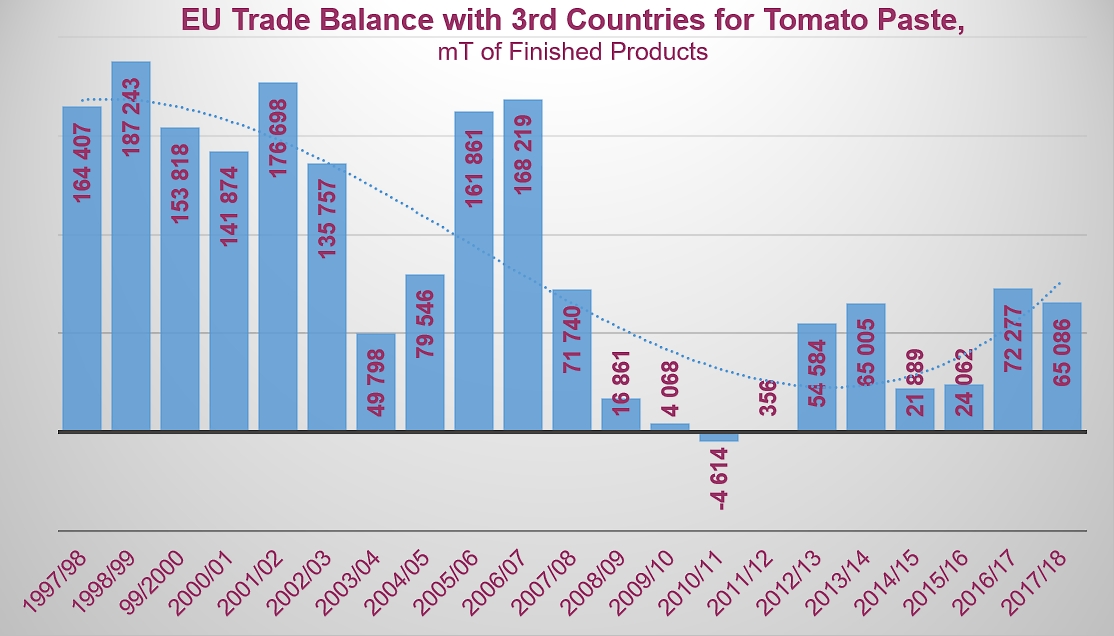 In conclusion, official trade data supplied by European customs services clearly demonstrates that the levels of trade recorded by the European tomato processing industry can easily meet the requirements of domestic demand at present, while generating notable surplus results on the export market.
Along with this observation, the report from the European Commission seems to open prospects indicating that domestic consumption on the one hand and foreign markets on the other hand are likely to continue developing at a good rate in coming years, which is likely to take total demand, by 2030, to considerably higher levels than those currently recorded within our industry. After the very difficult context of recent years, this appreciation will no doubt be welcomed by the European industry.
Some complementary data
(*): Report, EC (2018), EU agricultural outlook for markets and income, 2018-2030. European Commission, DG Agriculture and Rural Development, Brussels
European trade balance for tomato products: after several downturns, trade performances have progressively consolidated once again the positioning of the European processing industry on the worldwide market. 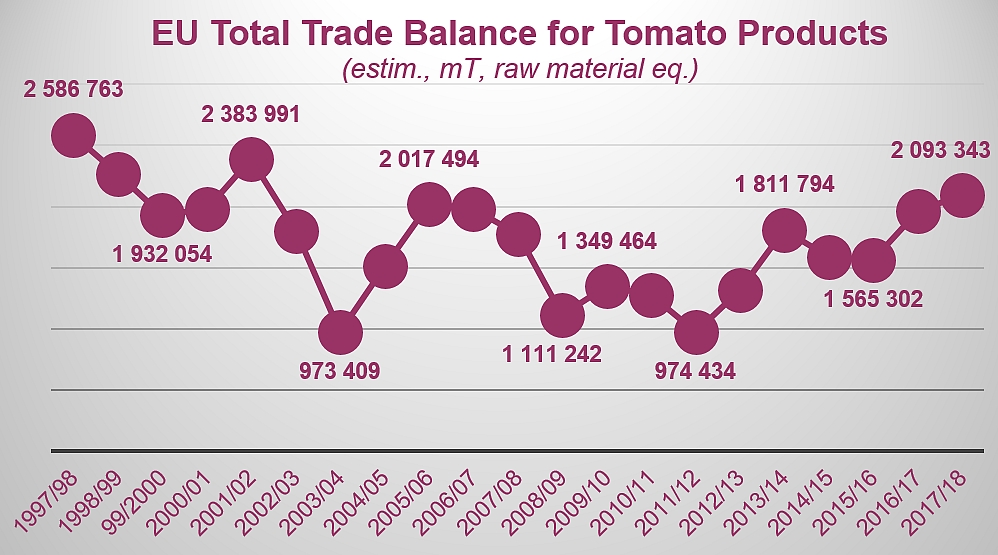 The share of the quantities processed by the European industry that has been absorbed by the trade balance surplus has once again begun increasing over the past five or six marketing years. 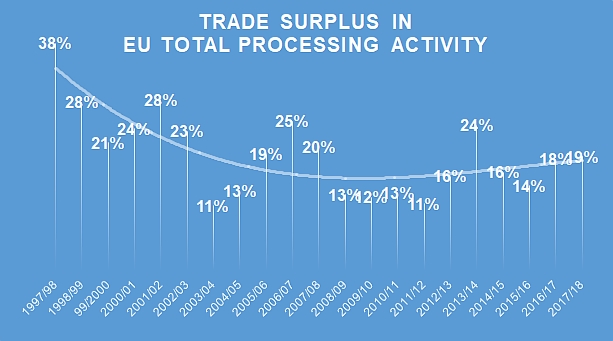 Most of the "exports" of European processing countries are shipped to destinations of the domestic market, and in a proportion that has been increasing for many years. At the same time, the volumes shipped to foreign markets have also regularly increased. 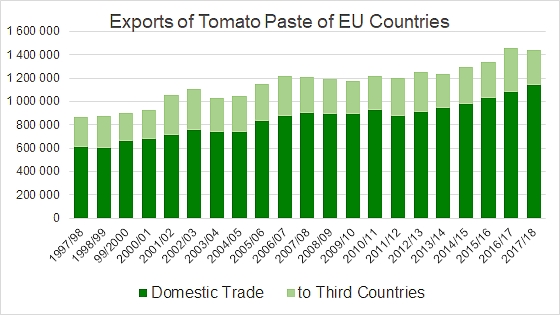 Having been undermined for a few years on their own territory by products coming from third-party countries, products from within the EC have progressively recovered their position on the European market for paste supplies. 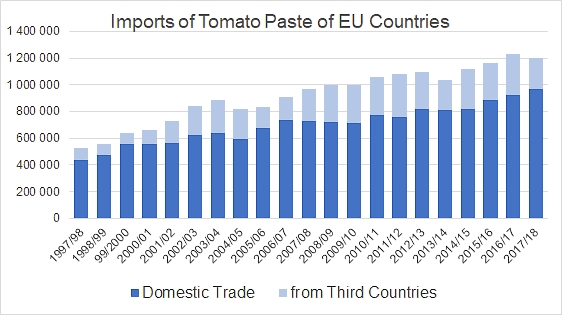