According to the 2020 California Processing Tomato Report released on 27 August by NASS, contracted production for California processing tomatoes is forecast at 11.4 million short tons (10,34 million metric tonnes), averaging 49.6 short tons (sT) per acre (111 mT/ha). The current forecasted production is 2.4% above last year’s contracted production, and 5.0% below the May forecast. The projected harvested acreage of tomatoes grown under contract is 230,000 acres, an increase of 1.3% compared to 2019.

There were no significant issues with planting, but higher than average temperatures through most of summer have lowered expected yields, especially in the early crop. Inconsistent weather patterns during the growing season caused short interruptions in the flow of ripe tomatoes to the processor. Reports on crop quality varied by region. Due to a lack of rain this year, water availability continues to be a concern. However, pest and disease pressure was low.

Harvest began the second week of July with a slow start, but caught up by early August. The Processing Tomato Advisory Board has published shipments through August 22, 2020, which were running about the same as those of 2019. Since then, wildfires across the State have impacted harvest activities and transportation at a critical point in the season.
This processing tomato estimate is funded by the California League of Food Producers, in cooperation with the California Department of Food and Agriculture.

Some complementary data
Starting and ending dates of previous seasons: the average total duration of the last sixteen harvest seasons has been around 119 days. 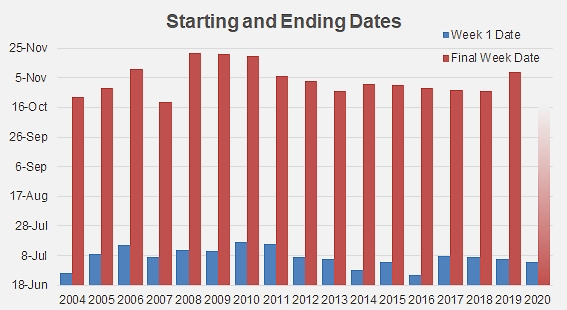