According to information collected by the Morning Star company, Californian processing capacity should decrease by 11 to 12% in 2020. The most important event in this regard was the announcement by the Olam company in late 2019 that it intends to terminate its “tomato” operations at the processing plants of Lemoore and Williams. This was compounded by a similar announcement regarding the Ragu factory (Unilever BestFoods) in Stockton at the beginning of February 2020. In total, the interruption of the season’s operations at these different sites deprives the Californian industry of approximately 1.65 million metric tonnes of capacity (2019 figures, for an 85-day season). 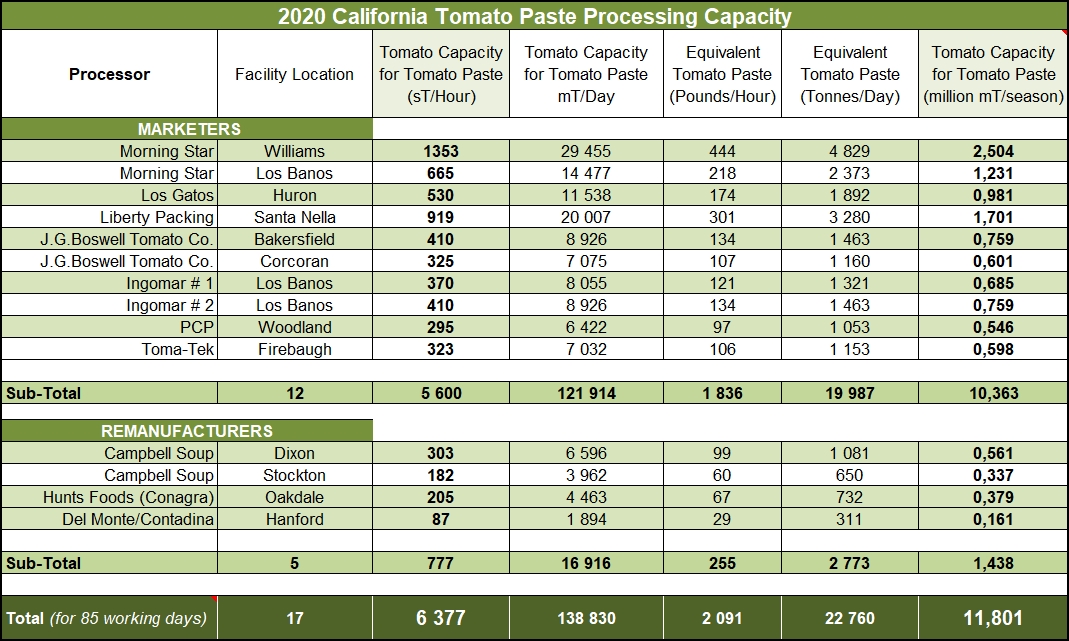 Two further changes have occurred since 2019. The first of these is an increase in the processing capacity of Liberty Packing, on which Morning Star commented by pointing out that it “continuously strives to innovate and expand [its] operations to ensure [the company] meets customer demand in the most efficient and cost-effective means possible. For the 2020 season, [the] Santa Nella facility, Liberty Packing Company, is undergoing key expansions: the already massive tomato fire roaster will be doubling its capacity from 25 tons/hour to 50 tons/hour.
A new dedicated processing line is being built in what was once the peach processing building. The new line will include a steam peeler, which expands total peeling capacity from 290 tons/hour to 410 tons/hour with, consequently, additional dicing capacity. In addition, this new line will be used to expand Liberty’s specialty, organic and R&D production capabilities.
With the introduction of this new dedicated processing line, Liberty will be able to produce additional formulated industrial products, which includes fire roasted formulated products.”

The second change was carried out by Tomatek (Neil Jones Company) of Firebaugh, whose capacity for processing tomatoes into pastes increased by almost 20%.

These different changes have accentuated the imbalance between companies whose manufacturing activity is intended for internal use and those whose main vocation is selling to remanufacturing companies. 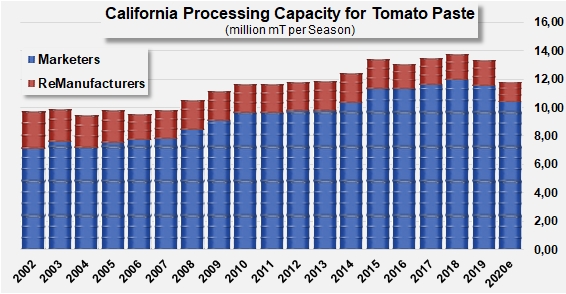 Marketers: Plants making paste for the main purpose of selling it to another party
Remanufacturers: Plants making paste for use internally
California’s installed capacity is now reckoned at approximately 11.8 million metric tonnes (mT), or around 13 million short tons (sT), an amount closer to the processing intentions that were estimated, at the time of writing this article, at around 10.9 million mT (or 12 million sT) for the 2020 season, thus leaving processors around 8% room for maneuver.

Beyond the changes already carried out, the CoVid crisis could also have an impact on the level of operations. The drastic drop in out-of-home consumption reported in many countries due to the confinement of populations has inclined many processors to revise their 2020 processing program. This drop has been only partially offset by a significant but insufficient increase in retail sales. The most sensitive of these processors have been the companies specializing in products for the HoReCa sector, with an anticipated reduction in the areas dedicated to growing processing tomatoes. Figures have been put forward, often overestimated, and only the “USDA tomato industry report” of 28 May is likely to give a clear picture of the intentions for cultivation and processing, just over a month from the start of the harvest. In any event, the “abandoned” hectares are unlikely to profoundly change the Californian landscape, as all or part of these surfaces could be “taken over” by other operators.
Ultimately, the 2020 season could well be marked by a return of operating ratios to a level more in line with a reasonable profitability for the installed industrial capacity, after several seasons noted for the oversizing of California’s processing sector. 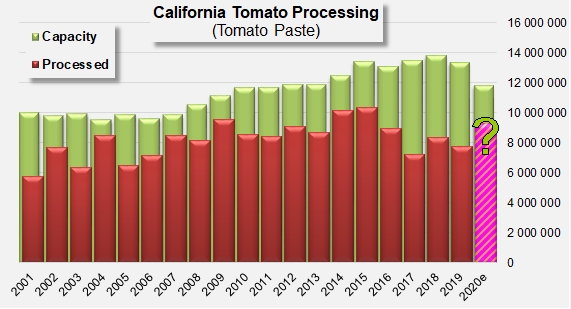 Some complementary data
For comparison, capacities of Californian processing plants in 2019. 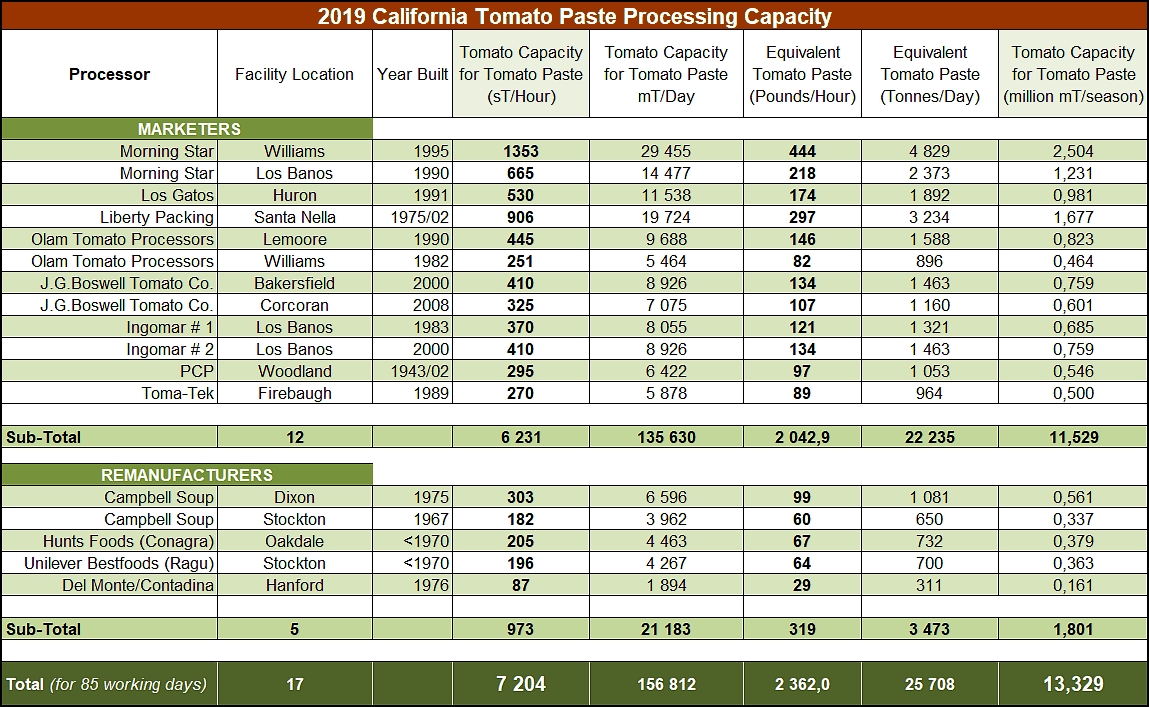 Breakdown of 2020 processing capacities, by company. 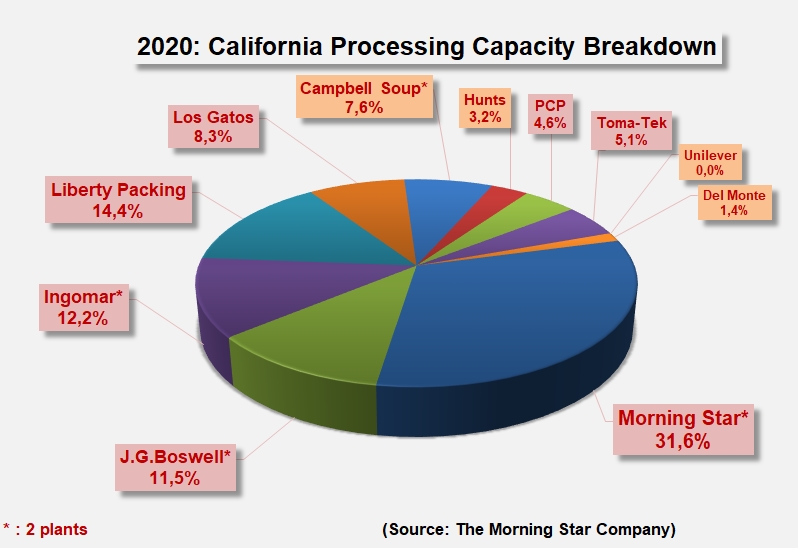 Compared breakdown of Californian processing capacities in 2007 and in 2020.

See also the new website of The Morning Star Company:
https://www.morningstarco.com/resources/reports-statistics-and-whitepapers/
and the video “Special Morning Star Edition” that was recently made available in our Tomato News Newsletter and website: 2020 Season Update at Morning Star
https://vimeo.com/418179575 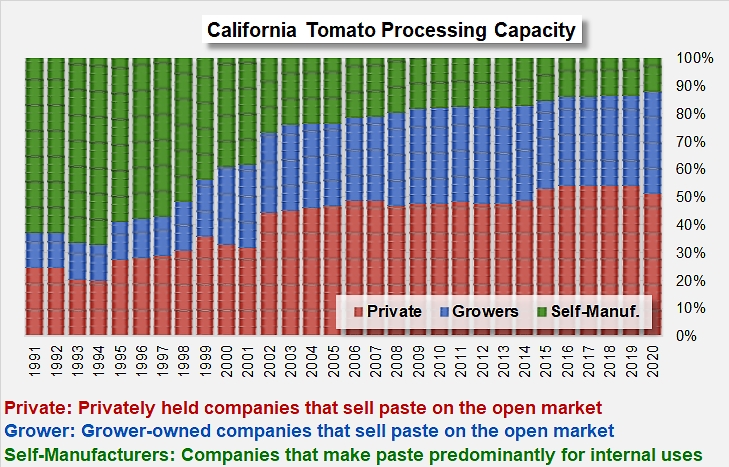