28/04/2020 - Sophie Colvine , François-Xavier Branthôme - 2019 Season
This dossier is one of the articles which were originally to be published in the "Processed Tomatoes 2020 Yearbook", which all attendees in the World Congress of Processing Tomatoes would have received free of charge upon their arrival in San Juan, Argentina.

Final production in 2019 was 37.38 million metric tonnes (mT), 2.4 million tonnes above the 2018 volume. Although this overall total is very close to the initial forecast released by WPTC in February 2019, it hides sometimes large variations between the early estimate and the final figure in individual countries. 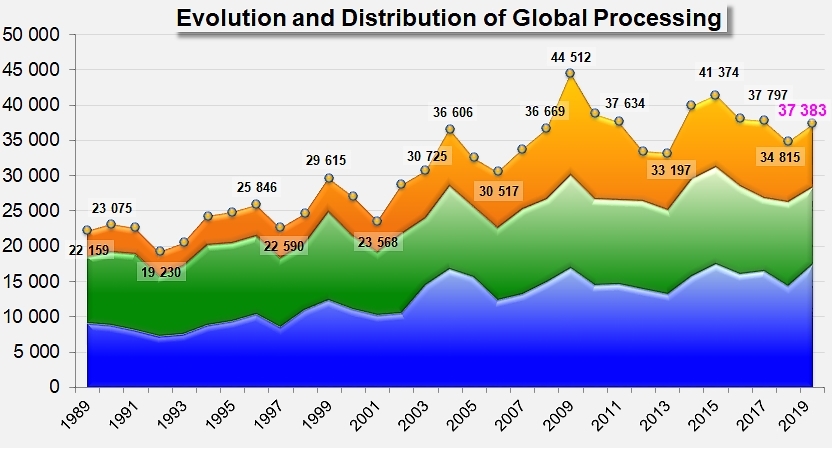 AMITOM members in the EU
In Italy, although early estimates were 4.95 million tonnes, the final results showed a total production of 4,800,648 metric tonnes of which 2,368,745 tonnes in the North and 2,431,903 tonnes in the South.
Total quantities processed in Northern Italy amounted to 2.36 million mT: this was 18% less than the contracted quantities. Overall, 36,600 hectares were cultivated in Northern Italy, more than in 2018 but because of unfavourable weather conditions average yields were only 65 mT per hectare against a five-year average of around 70 mT. The season was not easy with a lot of rain in May, causing delays in production, coupled with several hailstorms and extreme heats in July and August. Quality was average with an overall brix of 4.76.
In the South of Italy, after a bad start of the season, the best September in twenty years enabled to recover volumes. Farm yields in September was over 100 mT/ha, bringing the season’s average to 88 mT/ha. While fruit quality was very good, colour was poor and there were lots of green tomatoes harvested which reduced factory yields by 5 or 6% compared to 2018. So, while the volume processed this year was higher than in 2018, the volume of finished products was lower.

In Portugal, the final result was 1.41 million tonnes, higher than the 1.26 million tonnes forecast. The 2019 ran smoothly with no special issue. Even though the hectares planted did not increase compared to 2018, the excellent yields averaging 97 mT/ha compensated the growers. Average brix was also good at 5.2.

In Spain, the 2019 season was also very good and final production was higher than the 3 million tonnes forecast at 3.2 million tonnes. Extremadura processed a higher volume than expected (2.2 million tonnes) due to record average yields of 97 mT/ha (the previous record was 90 mT/ha) on approximately 23 000 hectares. Fruit quality was also good with an average brix of 4.9. Another, 735,325 tonnes were grown on 6,880 hectares were processed in Andalusia where average yield amounted to close on 107 mT/ha in 2019. Throughout the rest of Spain (mainly in the Ebro valley), contracts were drawn up for approximately 280,000 tonnes of tomatoes, grown from a total surface of between 3,400 and 3,500 hectares.

In Greece, the 2019 season was good, with no excessive rain and no serious heatwave. Yields and quality were good with an average brix of 4.9. This enabled to reach the objective of 400,000 tonnes.

In Hungary, the tomato season started late and was shorter than usual. Farm yields were lower than last year at 80 mT/ha which resulted in a reduction of the total volume processed to about 100,000 tonnes. Brix was good at 4.93 on average.

In Turkey, the final crop was estimated at 2.2 million tonnes following a reasonable season which continued into early October. Weather throughout the season was not fantastic but there were no serious hails or rain.

In Iran, the final production was 1.65 million tonnes as good weather conditions enabled factories to continue processing into late October and early November.

In Egypt, approximately 400,000 tonnes with the main production during the summer and early fall but some processors operating nearly year-round.

In Ukraine, the final production of 720,000 tonnes was lower than the initial estimate, due largely to unfavourable weather in June and July and a wet beginning of the harvest. Average brix was low at 4.5.

In Russia, the season started at the middle of August, two weeks later than usual but the target was achieved with 552,000 tonnes finally processed due to a good October. Average yield was about 80 mT/ha and brix 4.7. 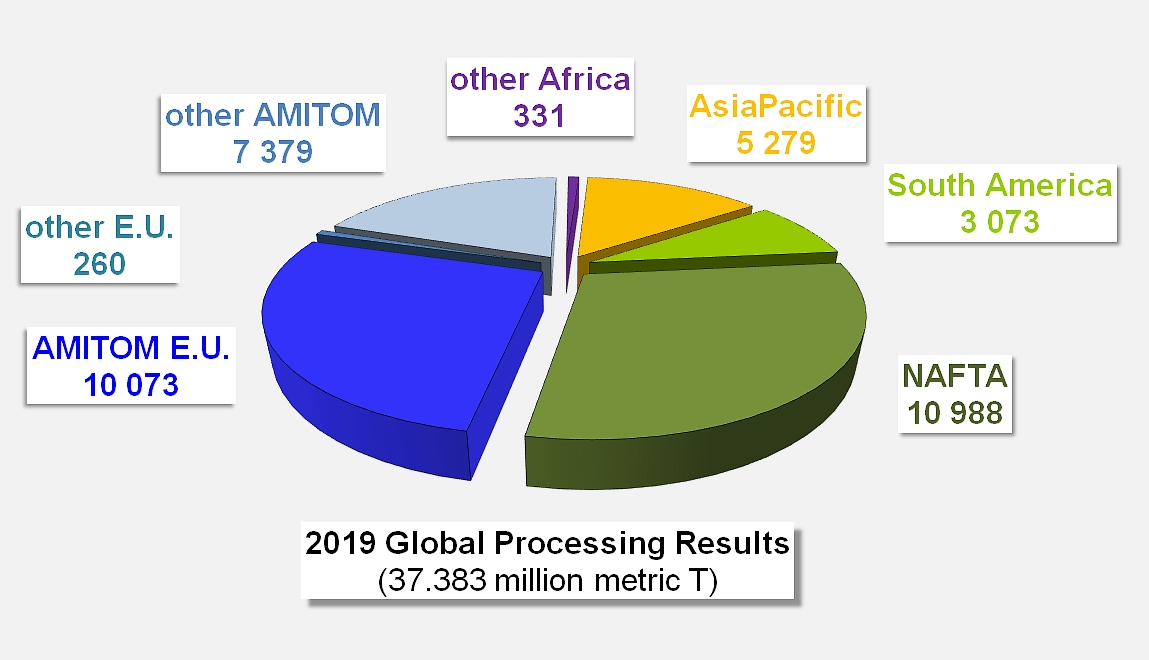 In Chile, a total of 1.1 million tonnes were processed in 2019, close to early estimate. Following the most serious drought in fifty years, a reduction of 30% of the surfaces planted was expected for 2020.

In Argentina, 395,000 tonnes were processed in 2019, slightly lower than expected due to some rains during the season. The harvest could however continue into May as there were no frosts.

In Brazil, 1.2 million tonnes were processed.

In Japan, the season ended with 27,000 tonnes of tomatoes being processed.

In South Africa, the season ended in October in the Winter region with a higher volume than expected. Added to 40,000 tonnes processed in the Summer region, the total tonnage was estimated at 140,000 tonnes. 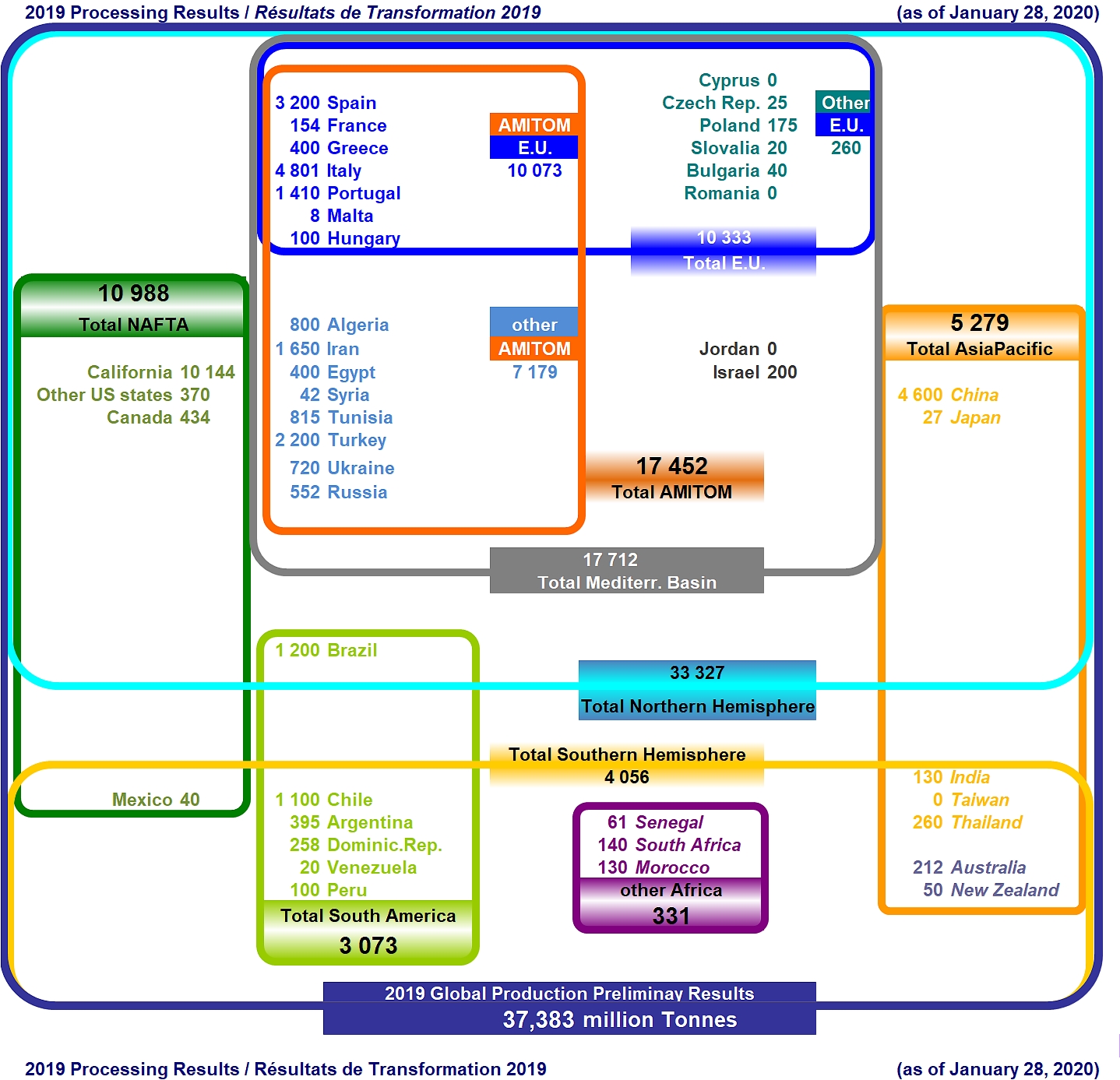 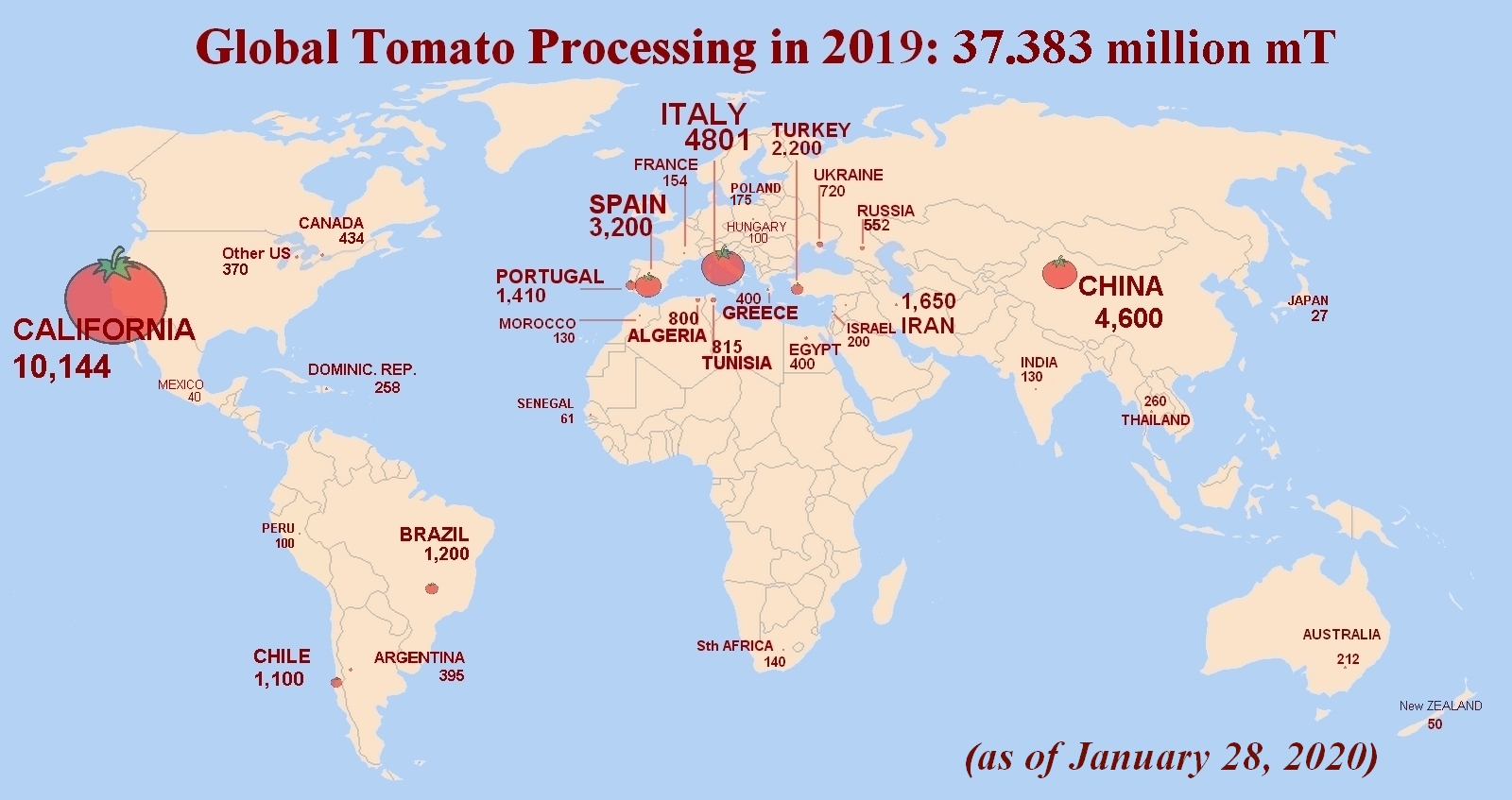 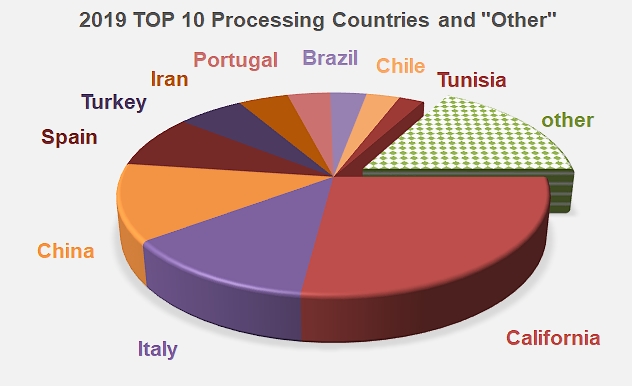 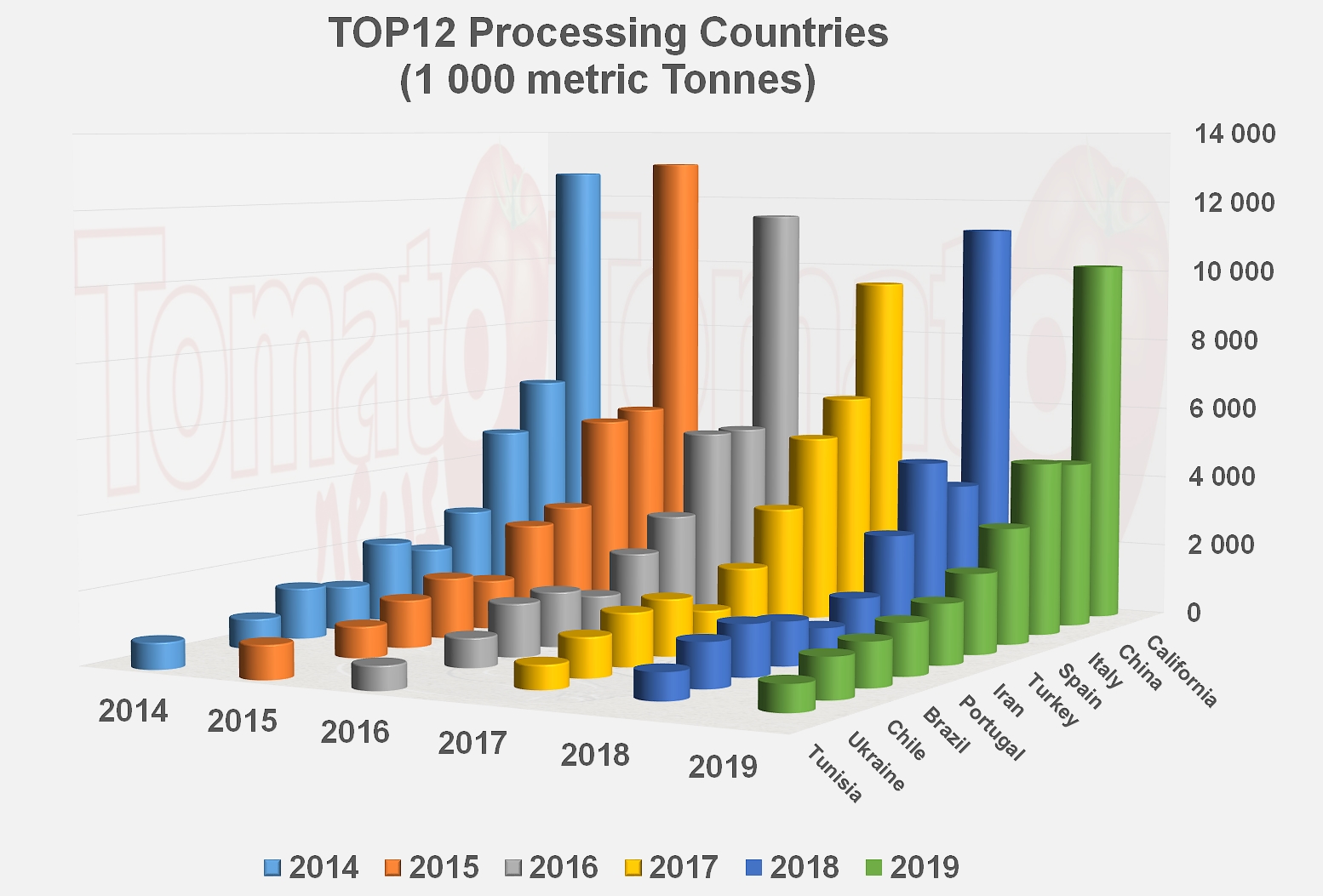