According to the report released in mid-January by the California League of Food Producers, total inventories of U.S. processed tomato products amounted to approximately 12.3 million tons (sT) (11.2 million metric tonnes (mT)), stated on a raw product equivalent basis, as of 1 December 2017.
Inventory is down 8% from the previous year's level (13.414 million sT, or 12.17 million mT). Apparent disappearance of tomato stocks has decreased 4.2%, totaling approximately 6.3 million sT (5.74 million mT) during the six-month period running 1 June 2017 to 1 December 2017, compared to the previous reporting period.

As shown by CLFP data, the quantity of products still available in US warehouses (including a proportion that is already sold) has notably dropped since December 2016 (-1.068 million sT, or -0.969 million mT), while at the same time apparent disappearance over the past six months (domestic consumption and exports) has dropped 4%: this decrease in inventories is therefore mainly the result of a drop of almost 16% in the volumes processed during the latest harvest season (11 million sT or 10 million mT).
Indeed, over 12 months, apparent disappearance has "only" absorbed 12.07 million sT (10.95 million mT), a relatively low rate of absorption, close to the symbolic monthly threshold of 1 million short tons, which had not been recorded since March 2010. Most of the volumes "consumed" (62%) have been recorded in the category of pastes for sale (equivalent to approximately 1.2 million metric tonnes of 28/30 paste), notably on the export market. Sales of paste for remanufacturing absorbed approximately 15% of the volumes, for a quantity that can be estimated at close to the equivalent of 300 000 mT of 28/30 paste.

Given the current situation, at the rate of disappearance recorded in recent months, available volumes as of 1 December 2017 are expected to cover demand for the next 12 months (that is until the first days of December 2018). This stated surplus accounts for approximately 100 days of apparent disappearance, a quantity that could be easier to manage than it might seem, given that it signals the first noticeable decrease since the peak volume that was reached last June (130 days of surplus). Furthermore, the trade context, which has been bolstered by a notable consolidation of the European currency in recent months, has once again become favorable to US exports and could further confirm the early signs that surplus stocks could be diminishing.

On this basis, the current volume of annual apparent disappearance stands at about 12.7 million sT, which is 11.6 million mT of raw tomato. It does not seem that Californian growers are considering an increase in planted surfaces in 2018, but yields are slightly higher than expected, so the volumes produced throughout the United States could be close to 10 million mT, maybe even higher. Even with a wide margin for error or uncertainty, the efforts of US processors to drastically decrease processed volumes, which they started in 2016 and carried on this year (3 million mT and 24% less than in 2016!), can only lead to a notable decrease throughout 2018 in the levels of stocks and surplus volumes held by the US industry, although this will most likely occur by the beginning of 2019.
In this new trade context, the main question will be to determine the interaction between the volumes and trade strategies of the other main processing regions like Europe, China and, increasingly, South America.

Some complementary data
The rate of apparent disappearance has slowed in recent months, approaching the monthly threshold of 1 million sT.

Between January 2017 and January 2018, the euro increased its value by 14% against the US currency. If this situation continues, the increase in the price of European products will penalize EU exports on the international market. 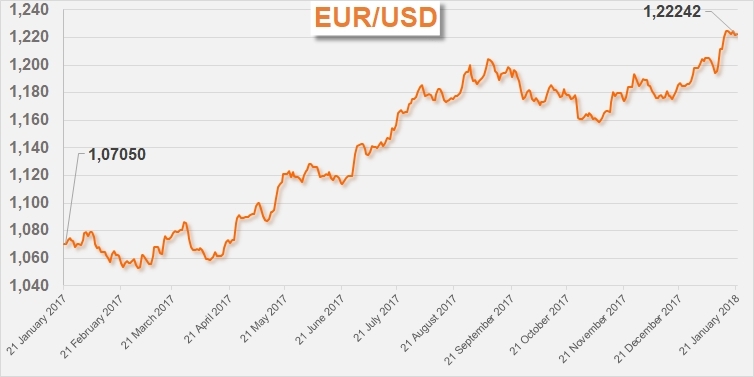