30/11/2020 - Martin Stilwell
How will the covid pandemic affect supply and demand in 2021/22?
From the presentation by Martin Stilwell, President of Tomato News SAS, during the Tomato News Online Conference held on November 17, 2020. 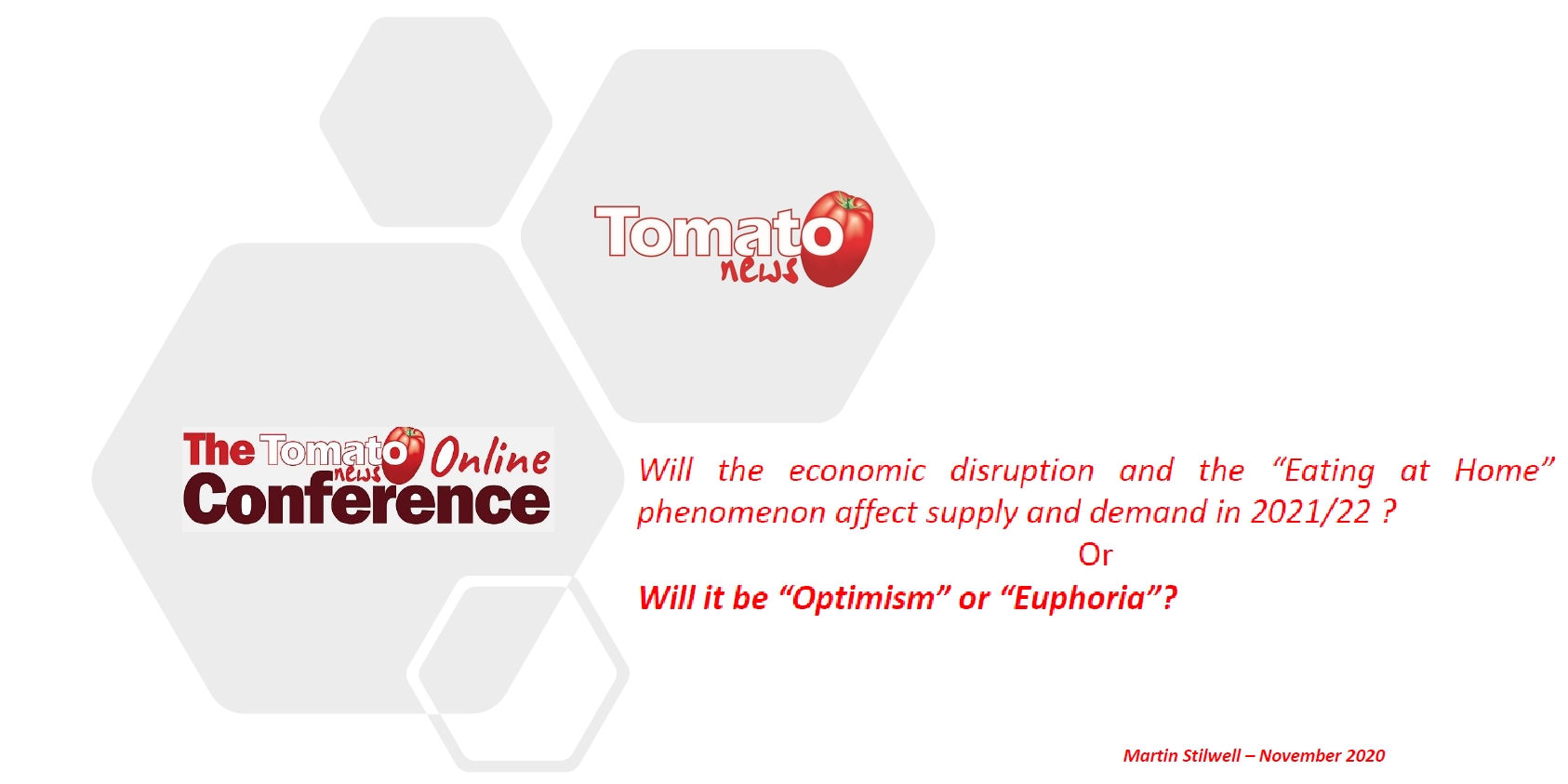 “A better grand title could be “Will the economic disruption and the eating at home phenomenon affect the supply and demand in 2021/2022?”

I think the straight answer is “yes”, but looking at the details with the help of the presentations which we’ve just seen, if we look at the graph which I published in Tomato News in April or May, which refers to sales of various products in supermarkets in the USA, it’s very obvious that tomato products were moving very fast – the topline is frozen pizza; so we had in March a 143% growth year-on-year and at the end of April a 53% increase. 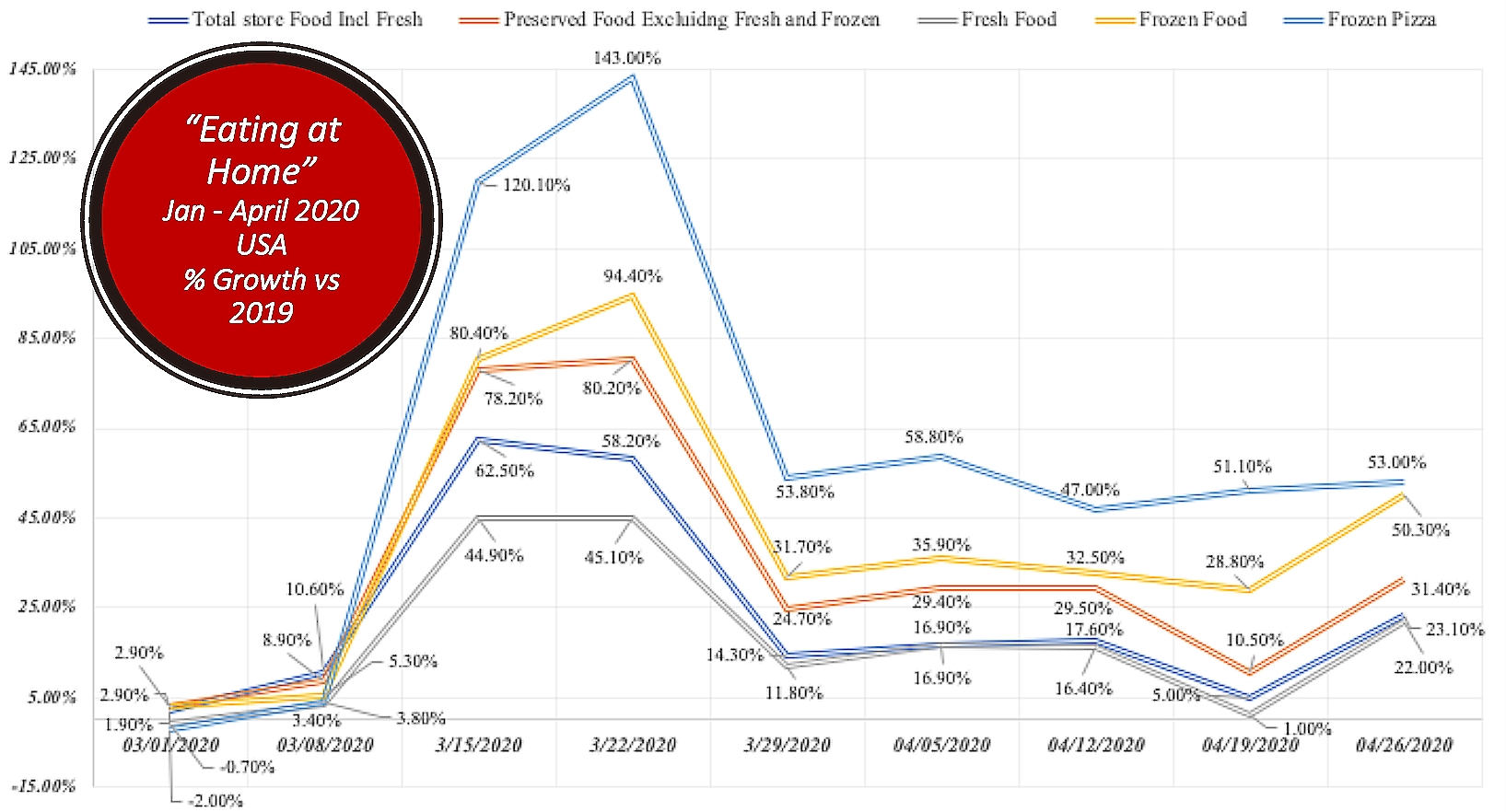 Greg Pruett (see annex) showed us results from Nielsen based on values (not volumes), but here again pizza is a huge number: Francesco Mutti [presented some figures I collected together in a graph which shows] the growth year-on-year through Europe both in volumes and in percentage. So we’ve clearly seen a very large change between 2019 and 2020. 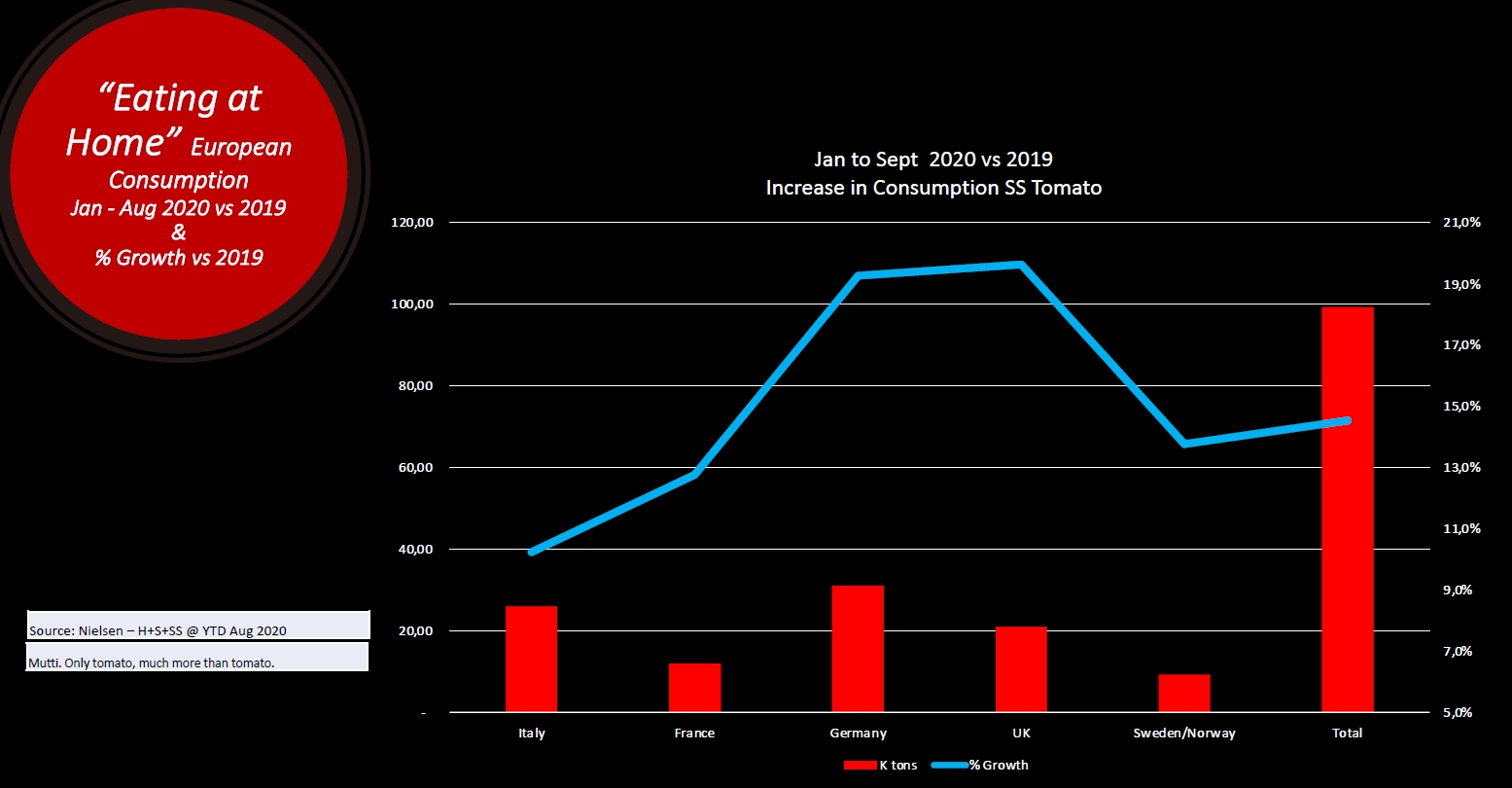 From China, we were told that internal market is increasing year-on-year with a compound growth rate of around 10%, which is interesting for us. 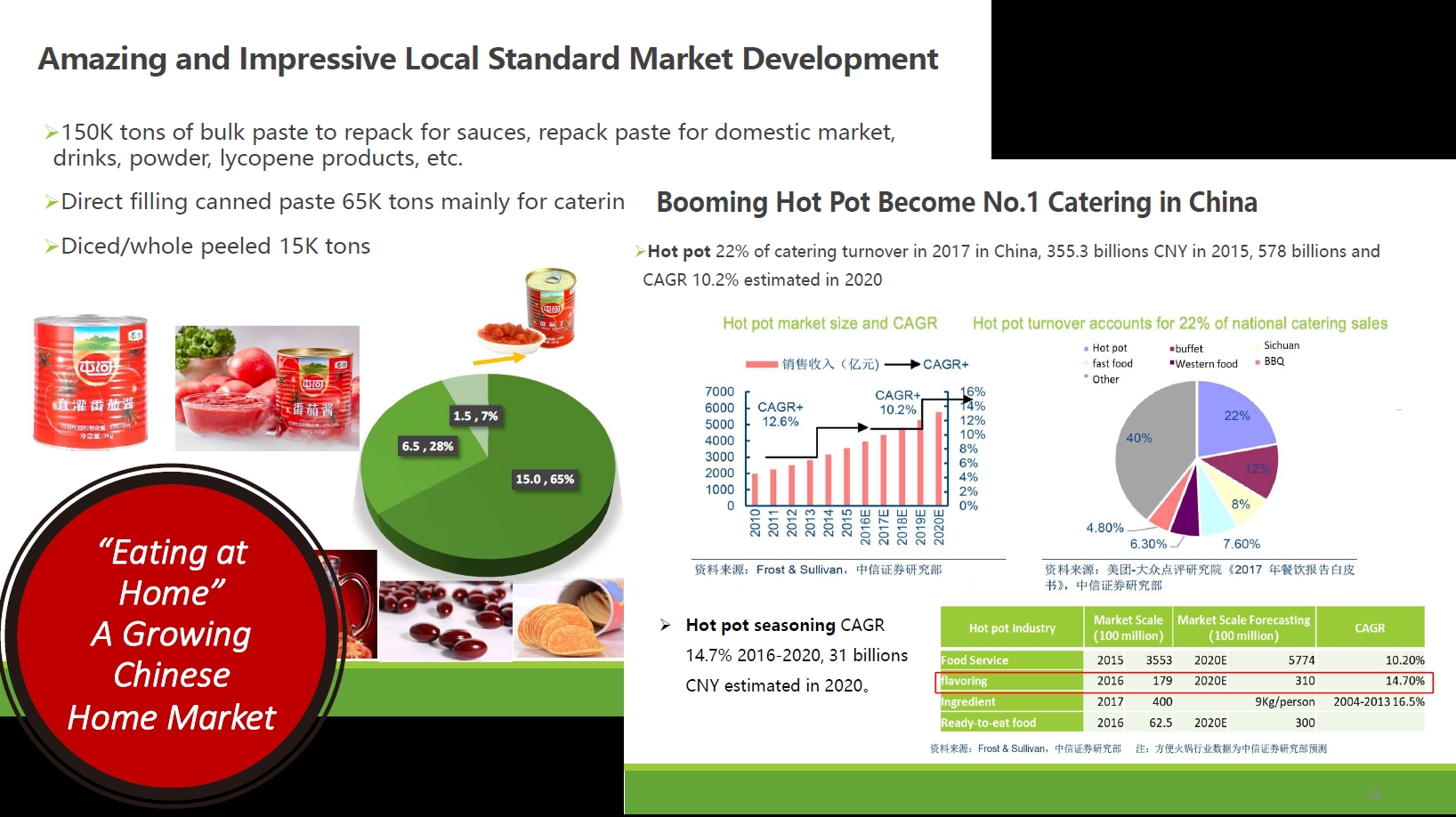 If we then look at this graph I have shown to many of you before, and which basically adds up the difference between production and consumption for every year – you start building inventory and then as you produce less inventory goes down, eventually comes to zero or possibly can be less than zero – it doesn’t mean that inventory is actually below zero but it means that there is less inventory available. 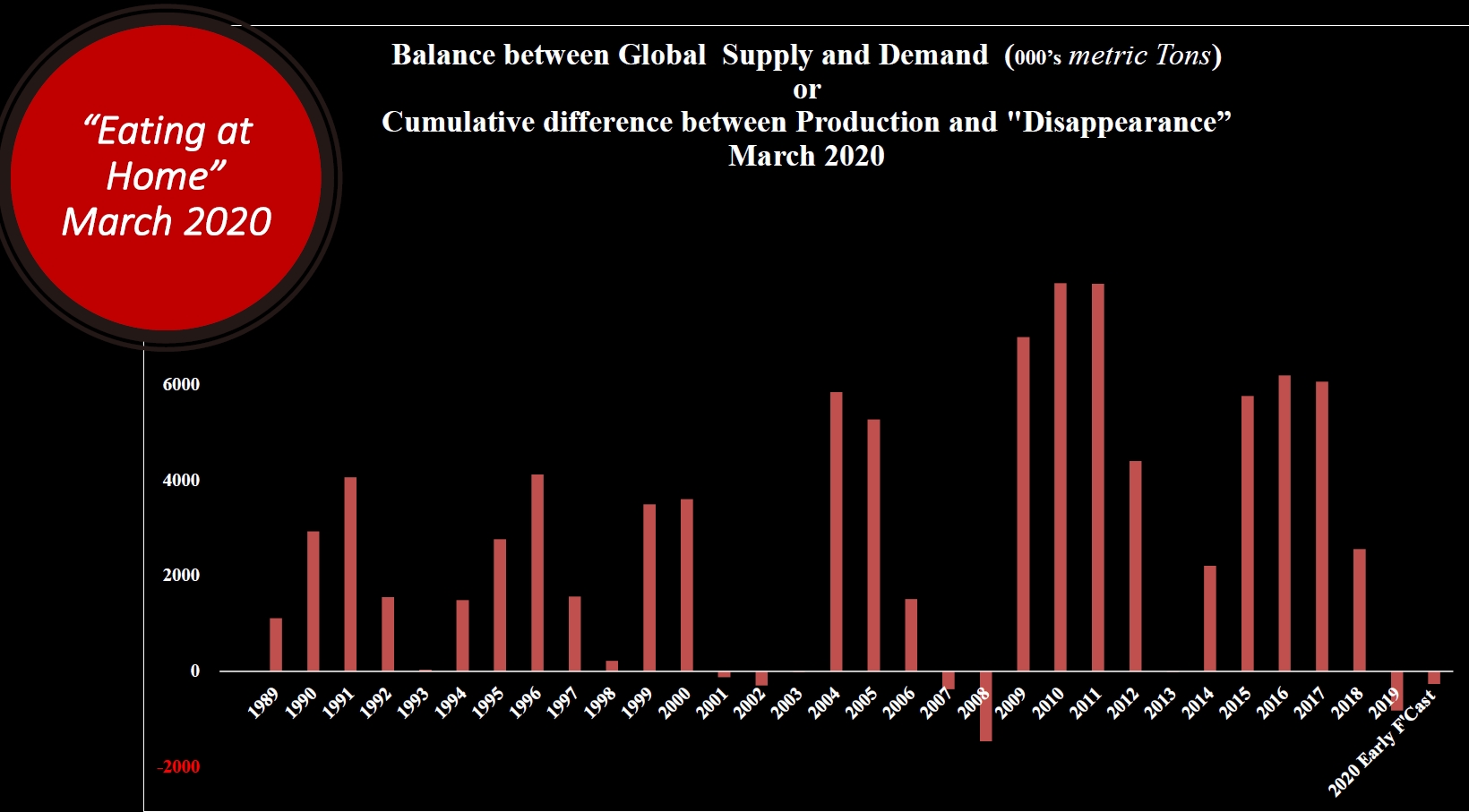 But things have changed: as many of you know as well, I have given names to the different phenomenon that occur while we sell our products.
We had - and I’m sure all of you who have been involved in tomato paste for some time will remember 2007, 2008 and 2009 enormous optimism, enormous euphoria: we produced in 2009 the largest crop ever, with the result that we went into a traditional process of denial in which we refused to accept that we have produced too much and still continued to produce at a high level, dismay when we realized that we were wrong and then despair as it appears that prices dropped so far that we started to wonder whether this is an industry worth being in…
And then of course the inventories correct and we have optimism: it’s quite interesting that our behavior has started to alter as we exchange numbers and information between ourselves – we’ve become more responsible and less euphoric and so we actually had in 2013 and 2014 two optimistic years, then a bit of a euphoria and then the traditional three years of the market gradually falling further and further.
Until the beginning of this year, we had optimism again and the important question which of course all of you – or all of us – should be looking at now because we are planning the next crop is: “what is going to happen next year?”
If we listen to what we’ve been told – we’ve been told that the market is very strong, there is no inventory anywhere – this is fairly typical of the situation when we allow the market to get out of hand. 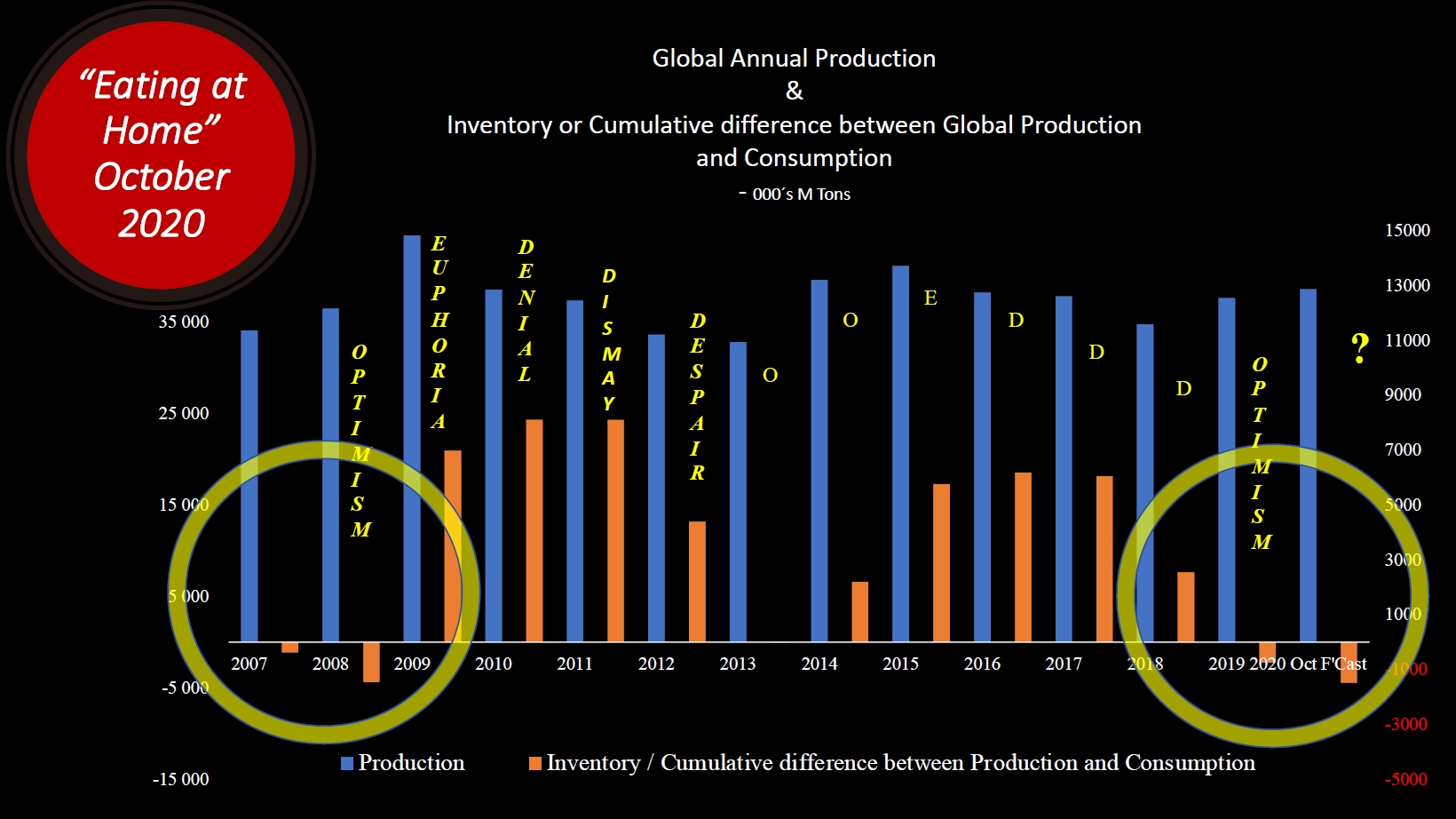 On the other hand we have the pandemic – what is going to happen with the pandemic? Clearly this winter is going to be different but probably just as difficult as the period we all went through in March to June with variant degrees of lockdown with some serious alarming situations in hospitals; the lockdowns and eating at home, as Francesco Mutti mentioned, they emphasized the convenience of the products we produce, and the intrinsic safety of them – the fact that we can store them easily… it is probable if we look at the period which we had between March and June, we had an additional movement of around 600 000 to 700 000 tonnes of tomato equivalent. So it is probable that something like 1 million tonnes equivalent of fresh tomatoes – an additional million tonnes – will have been consumed by the close of this year; that’s a large number, it’s more or less what we produce in Portugal.

Now the big news at the moment is the messenger-RNA vaccines which have appeared; we have two which have gone through or in the final phases of – final stages of – phase 3 testing which have shown very promising results; these vaccines are interesting in that they are very novel, and it’s likely that they are going to be successful in managing to help us control this pandemic – but how long is it going to take?

It’s quite likely that most of next year we will be having to be careful; it is also likely that as we emerge from this serious situation, the Horeca sector will recover slowly. I don’t see a fast recovery. The economic damage of the pandemic is huge and we should not forget the economic crisis of 2008-2011.
So, because – you know – the availability of money, the number of people who are unemployed is going to be large; on the other hand, tomato products are cheap… 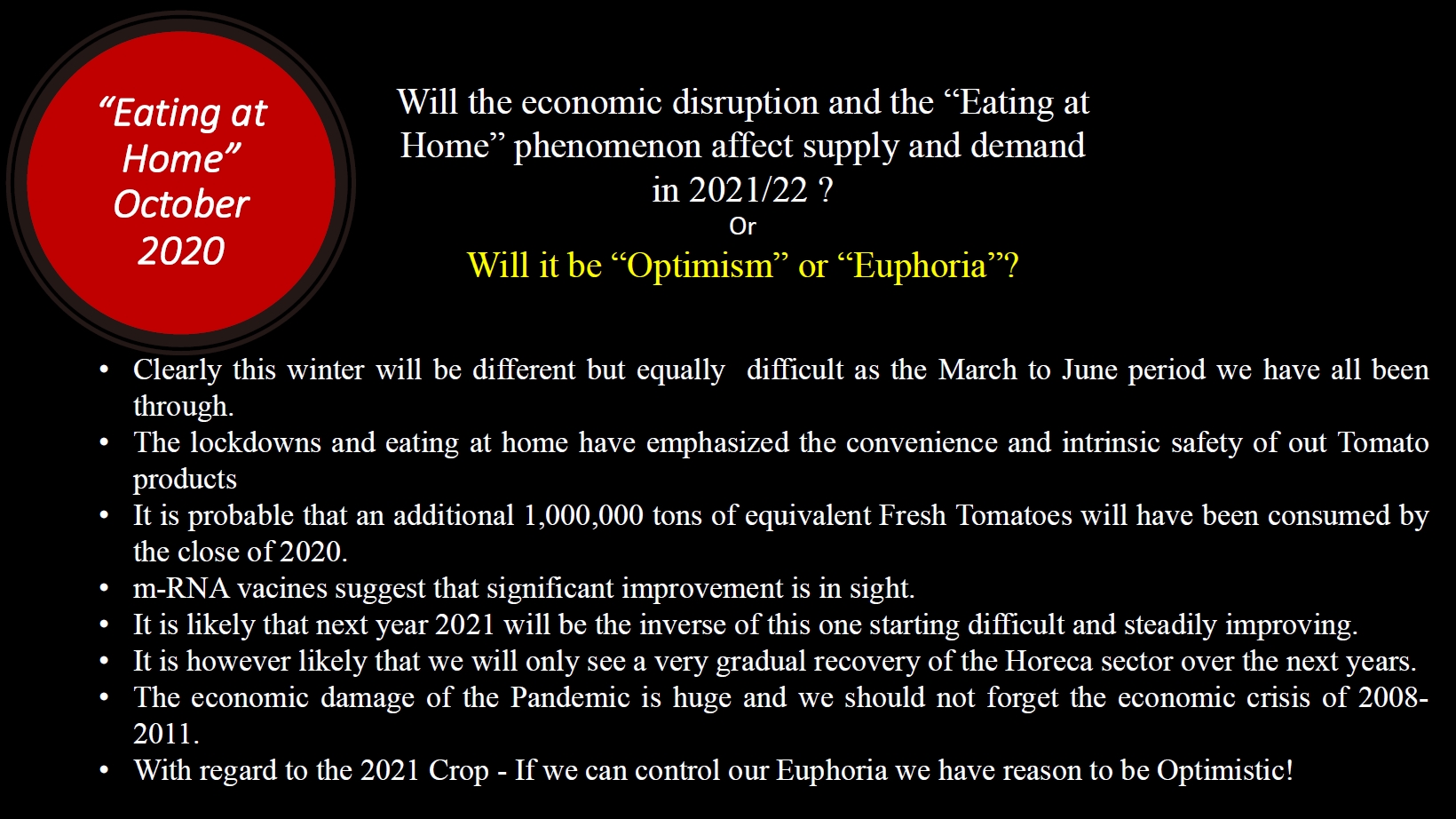 So my recommendation for you is that if we can control our euphoria, we have reason to be optimistic next year…

Thank you all and thank you for participating to the TomatoNews Online Conference!” 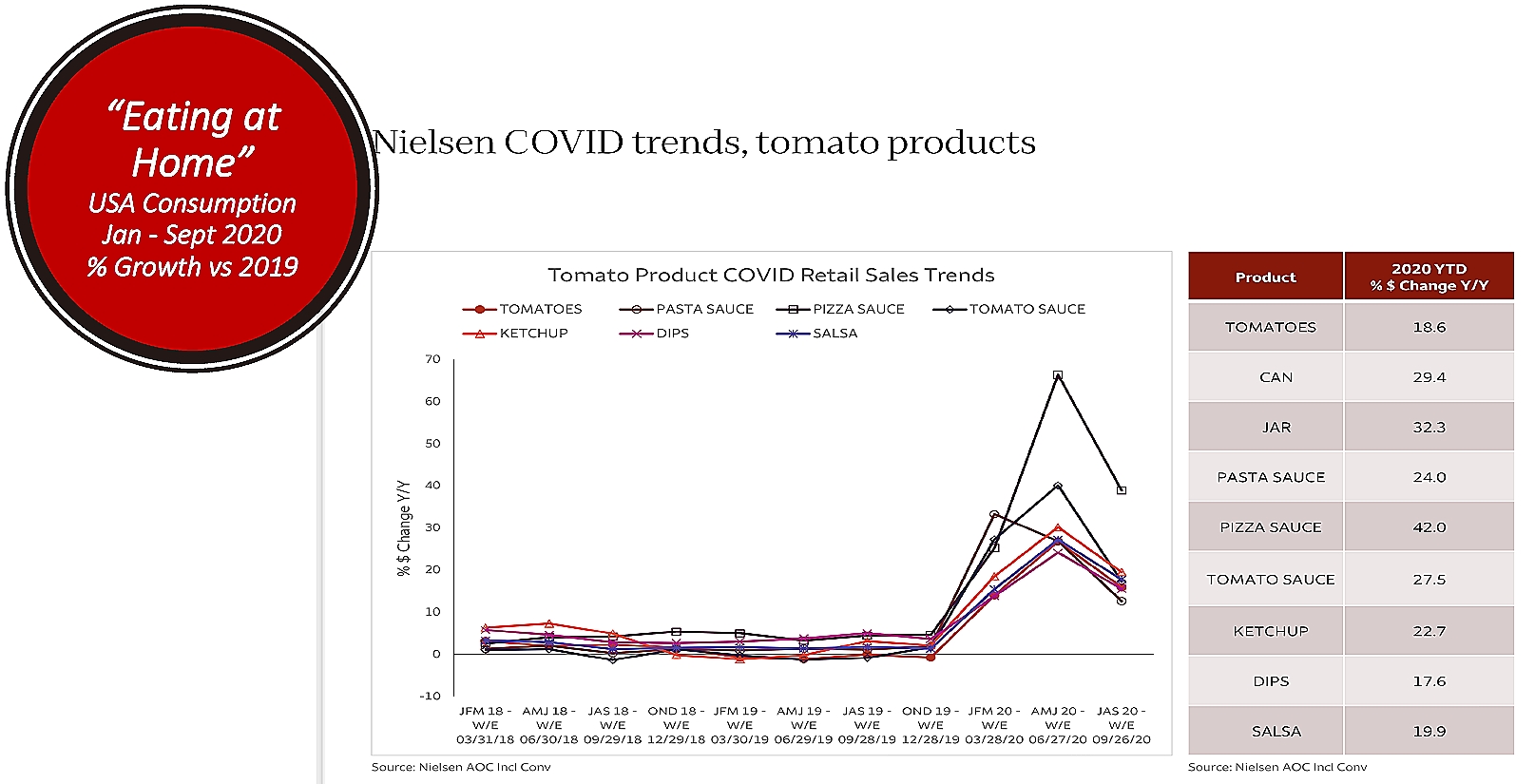 Most of other presentations from the Tomato News Online Conference will be transcripted during the coming weeks but all slides are already available here.
The videos of all the presentations will also be released in a few weeks (they are for now reserved for the webinar attendees).
Related events