As of July 2, the information collected by the WPTC makes virtually no change to the global processing outlook established in early June; the global forecasted activity level is currently at 38.8 million metric tonnes, or 190,000 mT (0.5%) more than the final result for the 2020 season, but down more than 900,000 mT compared to primary intentions defined at the start of the year. 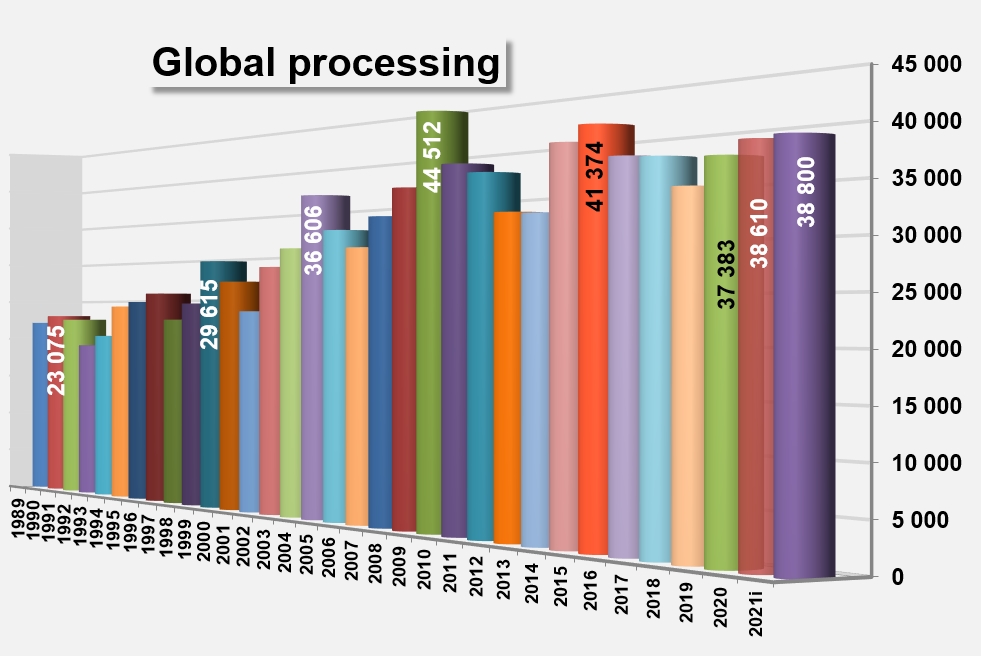 AMITOM countries
Algeria
The processing season started on 25 July in 13 main factories with a daily total capacity of 30,000 tonnes. The surface planted with tomatoes this year is estimated at 26,500 hectares, up from 24,500 hectares in 2020 as the government is giving subsidies to growers and processors to encourage local production to reduce the reliance on imported paste.

Egypt
The weather is favourable and there is no issue with water availability or diseases. The forecast remains unchanged.

France
The total surfaces planted for the 2021 season are 2,555 hectares, 566 of which are organic, of a total volume expected of 185,000 tonnes (26,000 tonnes of organic). Growing conditions have been good in June, except for some localised storms that damaged small surfaces.

Greece
Last week a hailstorm in the centre hit about 100 hectares but no significant damage has been reported. The current heatwave however with peaks of 43-44°C could have some detrimental effect on volumes. The forecast is maintained for the time being but could be reduced. Harvest will start mid-July in the South and at the end of the month in the Centre.

Hungary
The unusually cold April and May was followed by warm records in June, so plants are developing well. The forecast remains 100,000 tonnes.

Italy
North- Transplanting was finished at the end of June on the total surfaces contracted minus 1 or 2% only. The fields have recovered from the early difficult conditions thanks to good weather in June, with right temperatures during the day and the night and crop development is good. Temperatures are currently high. Not many issues are reported in the fields except some red mites and Alternaria but nothing dramatic. Harvest will start mid-July for small “datterini” tomatoes and end July for the main crop. There is some concern that there could be large volumes ripening at the same time at the start of August. Average yields of 70 t/ha are expected for the early crop and the forecast remains 2.8 million tonnes.
South- The first results of the satellite survey confirm a surface of 32,000 hectares planted with tomatoes. At a standard yield, it would mean a total production of 2.7 million tonnes approximately. Following low temperatures in March and April, the situation has been good in recent weeks. In recent days, temperatures have been very high at over 40°C so some flower abortion may happen. The two major issues are the risk of grouped maturation during the first three weeks in August and the availability of packaging materials (cans, plastic) if demand exceeds the standard requirements.
The total forecast for Italy is raised from 5.4 to 5.5 million tonnes.

Portugal
The weather in June has been quite stable with some high heat during the last couple of weeks which did not pose any issues. Temperatures are now favourable to good fruit maturation and the fields are looking good. Harvest should start in the last few days of July but mostly during the first week of August. The forecast remains unchanged.

Russia
The weather is favourable at the moment in Astrakhan region with a too rainy week in KBR. Expecting harvesting to start at the beginning of August. The forecast remains 550,000 tonnes.

Spain
Three weeks ago, storms and hail hit Extremadura causing the loss of 150 hectares and damages to a further 300-400 hectares. Some bacteriosis and blight are developing but in general a good crop is still expected. Harvest should start around 10 July in Andalusia and at the end of July in Extremadura. The total forecast remains unchanged at 3.1 million tonnes.

Ukraine
The forecast remains unchanged despite a challenging season so far.

Turkey
It rained several days per week during 2 to 3 weeks. This delayed planting and slowed plant development. Some localised hailstorms in the south did not damage large areas. It is now very hot. The harvest should be slightly late and should start during the first week of August in the north. Overall yields should be better than last year, and the forecast remains 2.1 million tonnes. 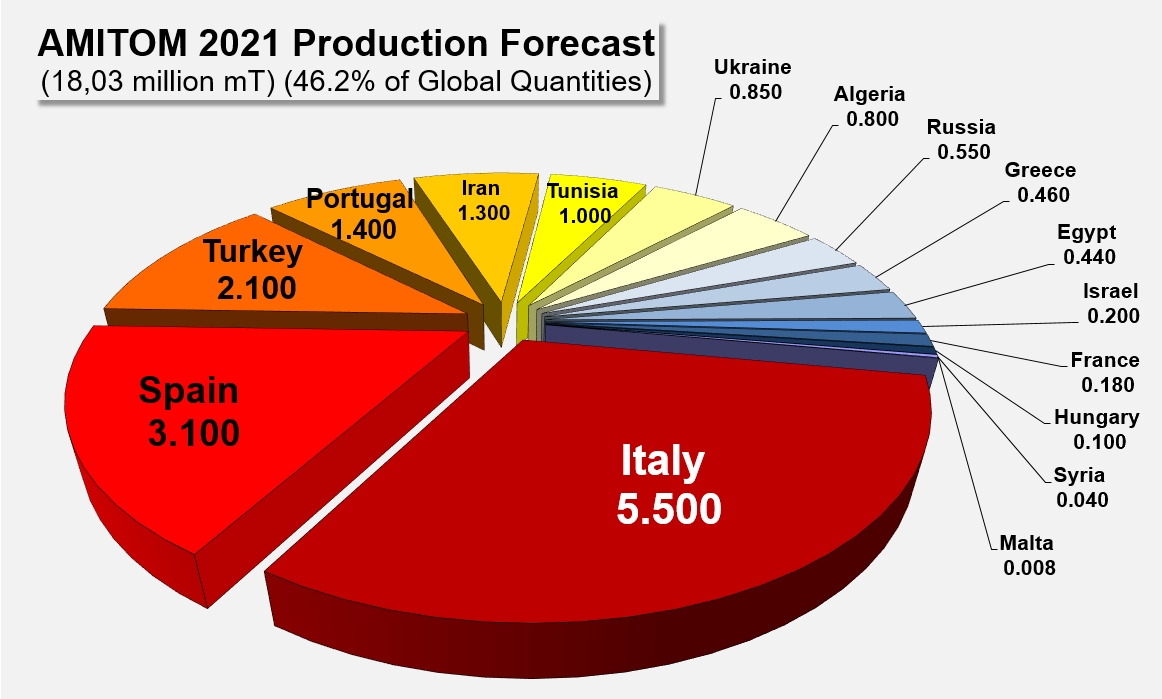 Other WPTC countries
Brazil
The season is going well with good development and good climate conditions. About 14,500 hectares were planted and an average of more than 90 t/ha is expected which means a total production of 1.3 million tonnes. This year some tomato pulp processors reactivated factories to supply internal market instead importing tomato pulp most because of the Real vs USD exchange rate.

California
Organic started on 24 June and conventional harvest will begin on Monday 5 July. So far this year the crop looks to be on schedule. During the month of June California experienced warmer than historical temperatures.

Japan
Growth is going well so far for most areas in Japan. The forecast remains as before at 32,000 tonnes.

USA outside California
Tomato planting in the Midwest is now complete. We recently had a small amount of crop damage related to thunderstorms. This is normal for our area and at this time too early to adjust previous forecast of 500,000 short tons (453,000 metric tonnes) and 14,700 acres (59,400 hectares). 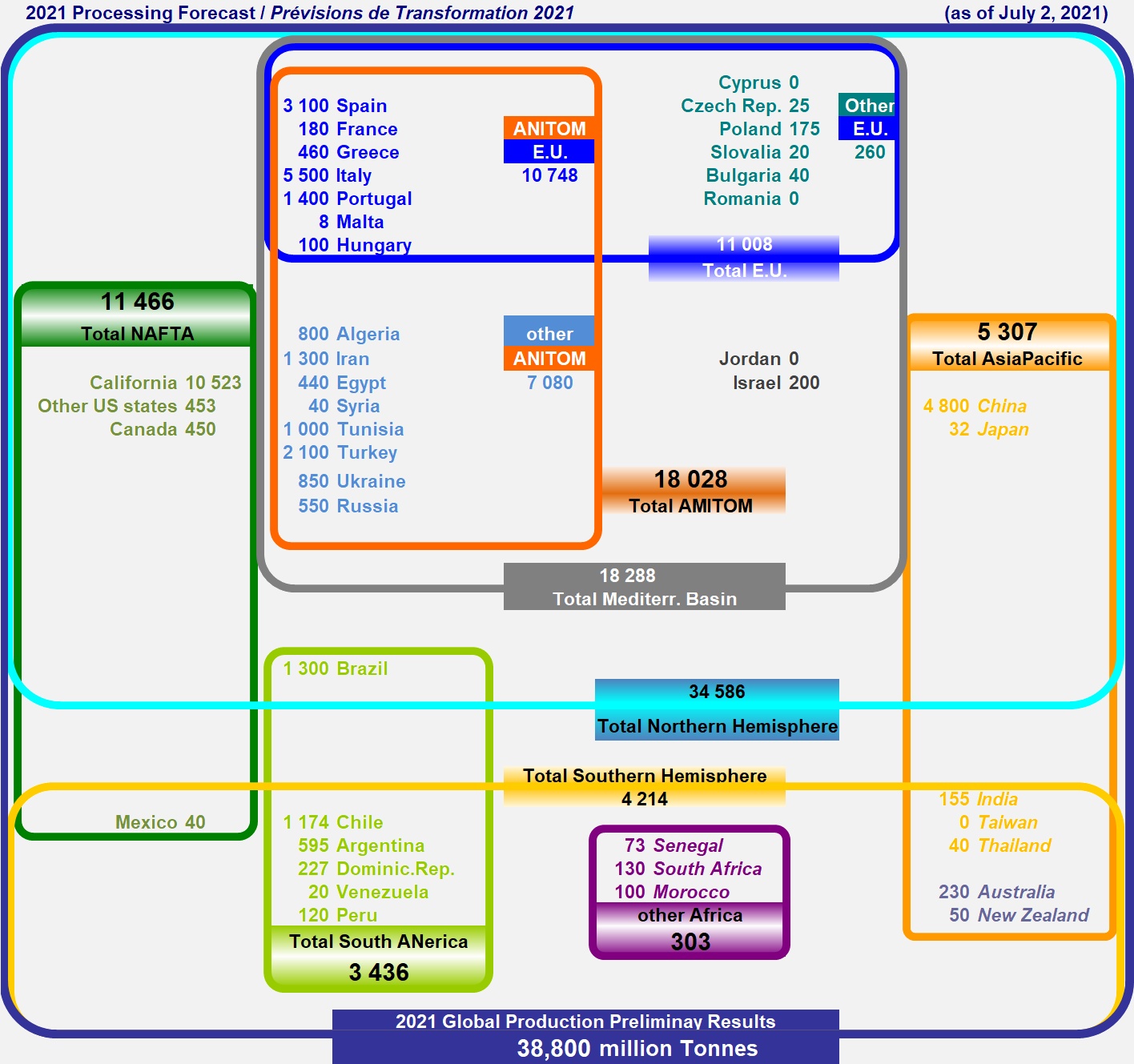