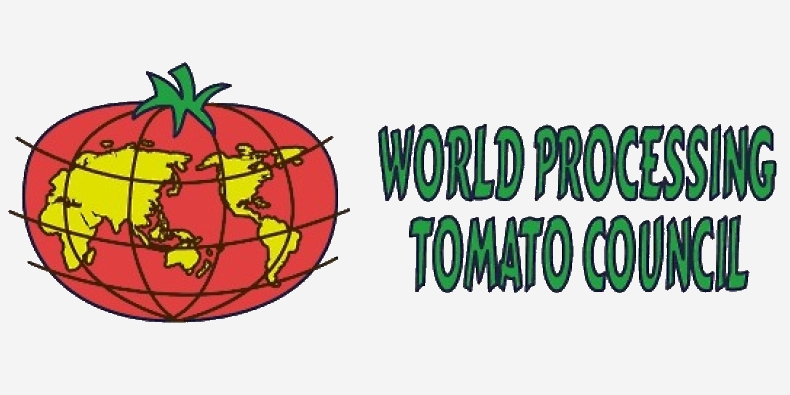 According to the latest estimate of processing intentions collected by the WPTC as of April 2, global activity is expected to be around 38.9 million tonnes in 2021, up less than 1% from the previous season's result. 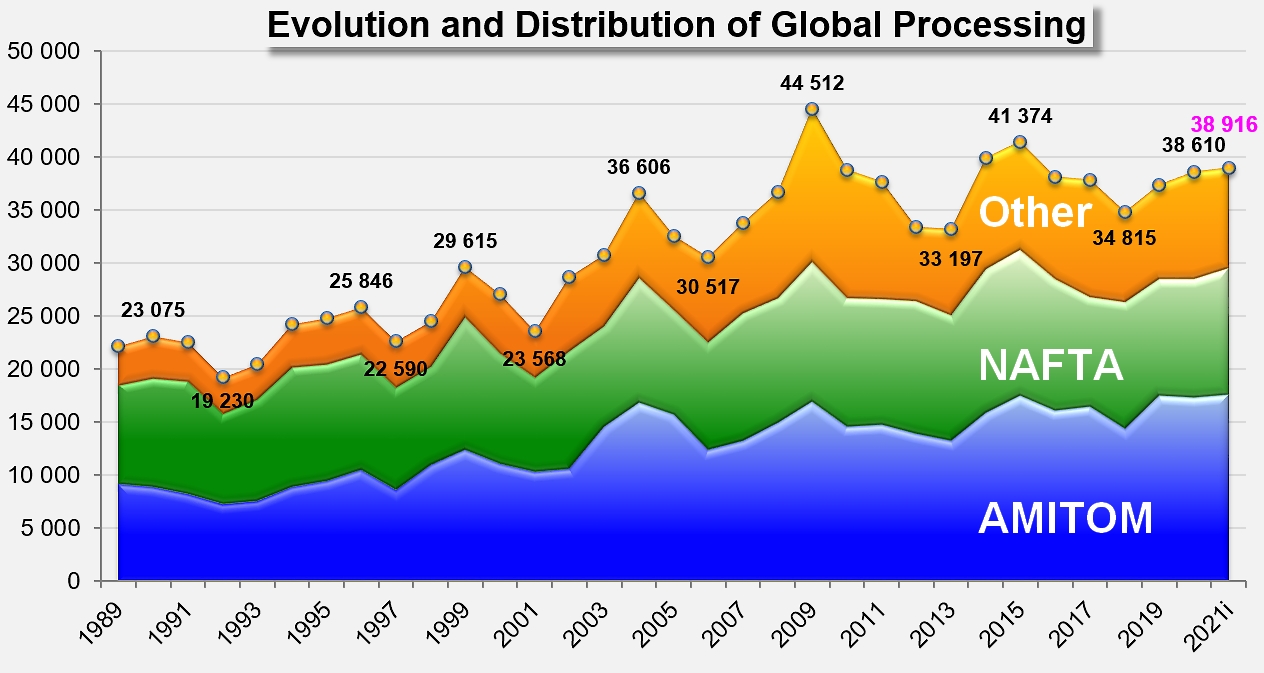 AMITOM countries
Egypt
We are at the end of winter crop and quality is so far good. The supplied quantity is however reduced now but it will return back to normal when the next loop starts (Nile crop) by May. Planted surfaces are the same as in 2020, but yields are higher at around 40-42 t/acre (99-104 t/ha). Colour and brix are very good too. Water is available thanks to the Nile River. No plant diseases reported.

France
A total surface of 2,447 hectares should be planted, of which 539 hectares of organics (22% of the surface, up from 16% in 2020), for an expected production of 155,000 tonnes of conventional and 25,000 tonnes of organic tomatoes, bringing the total forecast to 180,000 tonnes. Planted started last Friday and about 100 hectares should be planted in the south-east by the end of this week. Contracting for price is not yet finalized but an 8 to 10% increase is expected for the 2021 season.

Greece
The forecast remains 460,000 tonnes. Transplanting will be starting next weekend in the south, with some delay due to the cold weather. The contract price varies between factories and regions but average about 87-88 euros/t delivered.

Hungary
2021 production forecast remains 100,000 tonnes, with no organic production. Planting should start around 26-27 April, when all risks of frosts are gone. The price increased to about 86 euros/t this year.

Italy
South – Transplanting started on 10-12 March in Caserta but temperatures were too low for good plant recovery so it stopped and restarted under better conditions on 20 March. Operations will start next week in Puglia and Lazio. The total surface planted will be confirmed by satellite survey in July. The price of tomatoes is still under discussion with the factories hoping for a reduction from last year’s very high prices. Availability of water is good with the Occhito Dam at over 200 million cubic metres. The forecast remains 2.5 million tonnes for the south but could reach 2.7 million tonnes.
North – 131 contract have been signed between processors and POs with a planned areas for tomato increased by a few percentage points (3.9%) compared to those contracted last year due to the necessary reconstitution of stocks. The organic tomato crop represents about 10.5% of the total planted surface with a significant increase compared last year due to the higher demand from the market. The forecast for North Italy is confirmed in 2.8 million tonnes. After abundant rainfall and snow occurred from November until January, February and March have been without any rain, now the soil is very dry on the surface and if it does not rain soon, it will be necessary to irrigate before transplanting. Planting operation started this week in a very small scale and will continue in a large-scale next week after Easter. POs reported some difficulties in supplying seeds of some varieties of tomato to nurseries.
The overall forecast for Italy remains 5.3 million tonnes.

Portugal
There is no change in the forecast which remains 1.4 million tonnes. Planting has started slowly. Prices vary but average about 85 euro/t delivered.

Russia
The surface planted should be increased by 10% up to 7,500 hectares. The forecast equals to the last season intentions of 550,000 tonnes of tomatoes to be processed. The situation is normal in fields with rather warm weather at the moment. No problem of water availability are currently foreseen.

Spain
Transplanting started around 15 March in Andalusia but as there is still some concerns as regards water availability in the region for this season, it not certain that all the surfaces expected will be planted. In Extremadura, where there is no issue with water, transplanting started this week. The total forecast remains 2.9 million tonnes. No estimate is available for the organic production. Contract prices average about 77-79 euros/t ex field.

Tunisia
The forecast for seasonal tomato cultivation areas is 16,000 hectares and the estimate of industrial tomato production is 1 million tonnes, of which 950,000 tonnes are intended for the production of tomato paste and 50,000 tonnes for production of canned tomatoes. Transplanting of early varieties of tomato has started since mid-February and at the end of March, nearly 60% of the forecast areas have been completed. Climatic conditions are favorable for growing tomatoes.

Turkey
The forecast is now reduced to about 2.1 million tonnes as farmers are reluctant to plant as they lost money on the spot market last year. Contract prices are about 650 TRL/t delivered. 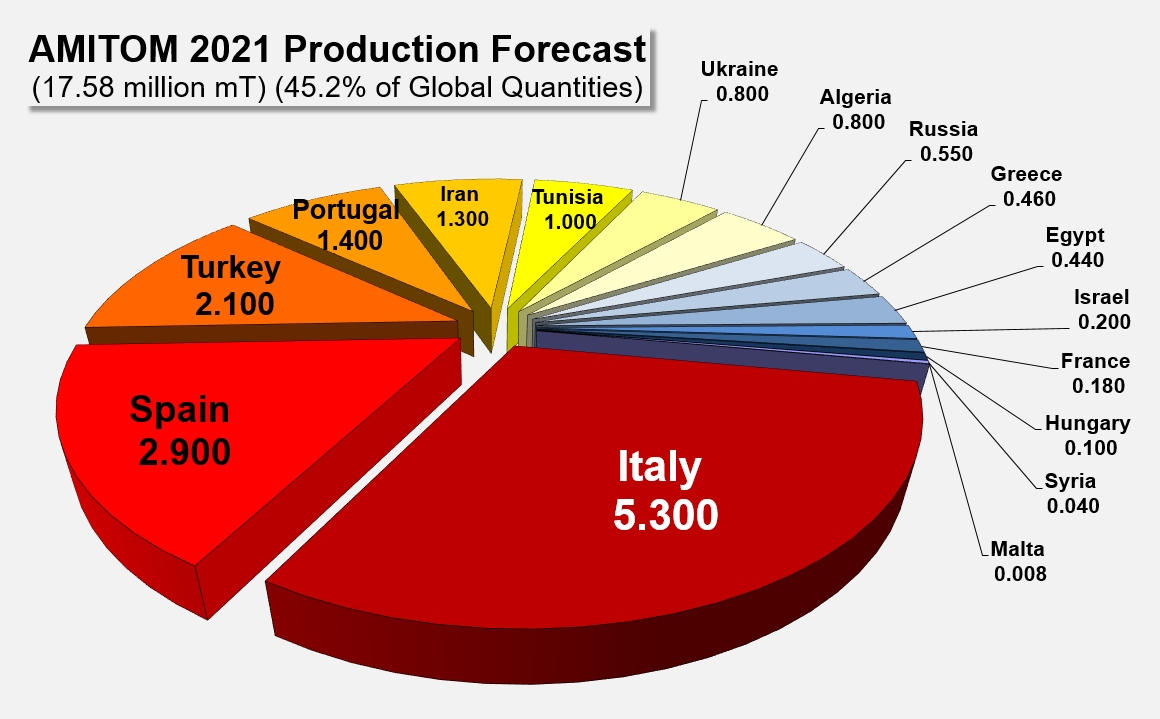 Other northern hemisphere countries
Brazil
The production forecast is raised to 1.5 million tonnes. It is expected that 125 to 150 farmers will plant 15.300 hectares  (average of about 120 hectares per farm) with an estimated average yield of 98 t/ha and expected brix averaging 4.5 to 4.7. Planting should finish at the end of May.

California
Planting is currently underway throughout the state. In January the NASS estimate was for 12.1 million short tons (10.97 million metric tonnes). At this time most believe the tonnage will be something lower than that and think it will be reflected in the May NASS update. The state continues to experience very dry conditions and water allocations have been reduced throughout the state. The 2021 price has been settled with all processors at USD 84.50 per short ton (USD 93.1 per metric tonne; 79.2 euro per metric tonne).

Other US States
Midwest & Pennsylvania estimate 500,000 short tons (453,000 metric tonnes) over 14,700 acres (5938 hectares). Planting should begin first week of May if weather permits. Current weather and moisture for Midwest U.S. is normal.

Canada
Estimated contract volumes are expected to be higher than last year, at approximately 495,000 short tons (450,000 metric tonnes). Weather permitting, planting is set to start between May 7 and 20.

China
According to the information collected, we anticipate the crop to come in at 4.8 million metric tonnes for China, the price of raw tomato in China is RMB 450-480 yuan/MT, which is RMB 30 yuan/MT (USD 4.6/t) higher than that in 2020. The weather is the same as last year.

Japan
The total volume of tomatoes to be processed is expected to be 32,000 tonnes from 460 hectares.

Southern hemisphere countries
Argentina
After some rains and hails in Mendoza, weather conditions for harvesting improved in the last week, therefore, mechanical harvesting operations are back to more normal progress. In San Juan, yields were generally higher than last year. The estimated forecast is now 540,000 tonnes for Argentina. However, the final numbers will be released in three weeks.

Australia
The first half of the harvest period in Australia was ideally dry and cooler than usual, with only low-moderate disease or insect pressure. Yields were in line with expectations and solids above 5.0 were consistently reported. Harvest was postponed on the 21st of March, due to rainfall across all growing regions; with measurements of between 27mm – 60mm recorded. The total time for harvest delay was between 7-10 days, with harvest getting well underway again this week for both of the major processors. Early reports are that the recent rainfall event has increased foliar disease pressure and harvest brix levels have dipped below 5.0, with yield losses expected to be approximately 10%. The conventional grown harvest expectation has consequently been lowered from the original estimate; however, the coming days will give a more exacting indication of how great the impact of this rain event has been on yields. The organic tomato harvest is finished and at 2,731 MT was down on the originally forecasted 5,000 MT. Water availability has been good this season, with prices dropping further last week, due to recent rainfall events.

Chile
The harvest season is now at about 75% of the total volume and should hopefully last until the end of April. The weather has been ok with no rains since the end of January which affected the volume expected by 5 to 10%. The final numbers will be clear in 3 weeks, so for now the forecast remains 1.13 million tonnes,

Peru
The harvest was good and the final volume is 120,000 tonnes as per forecast. 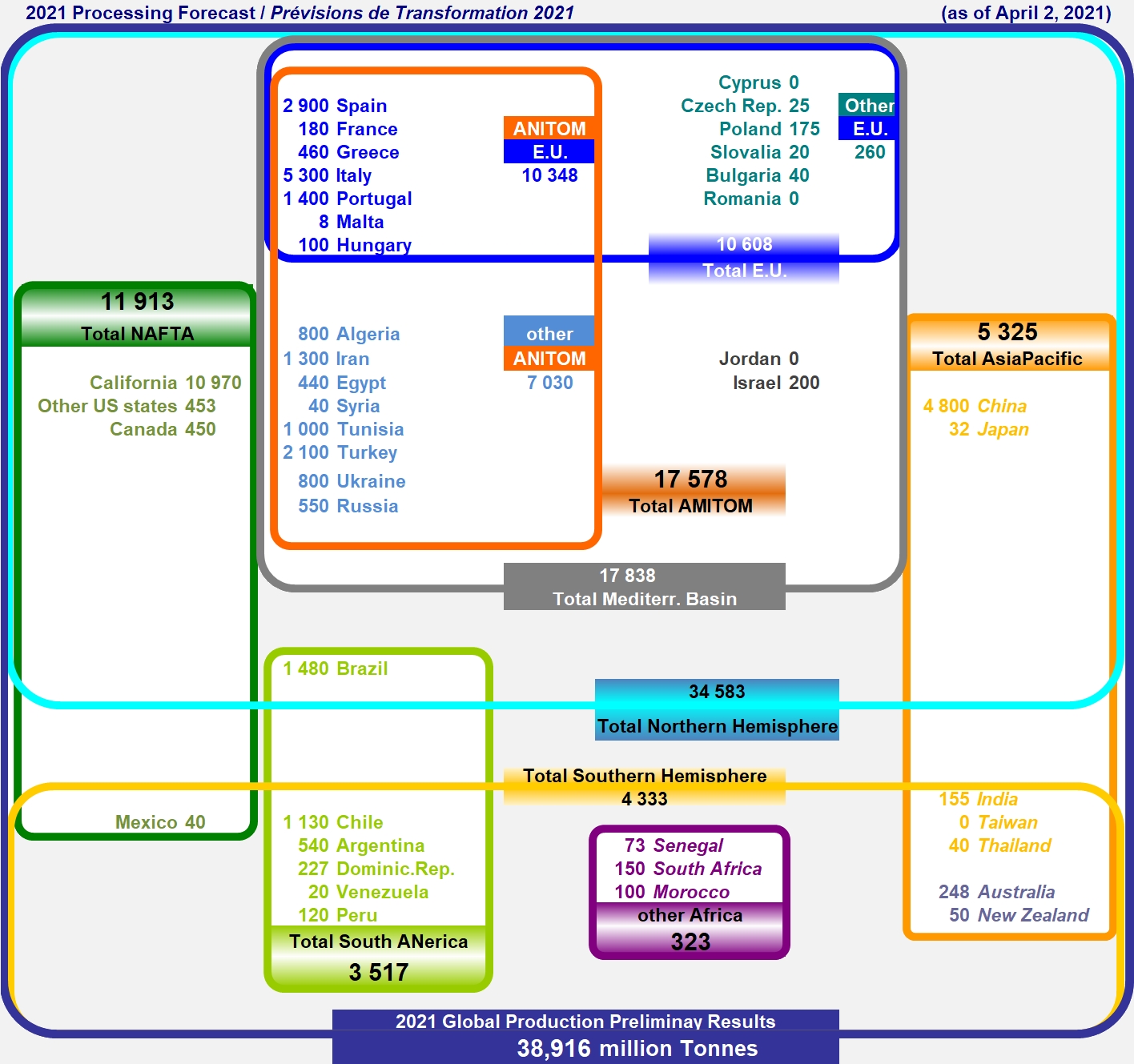