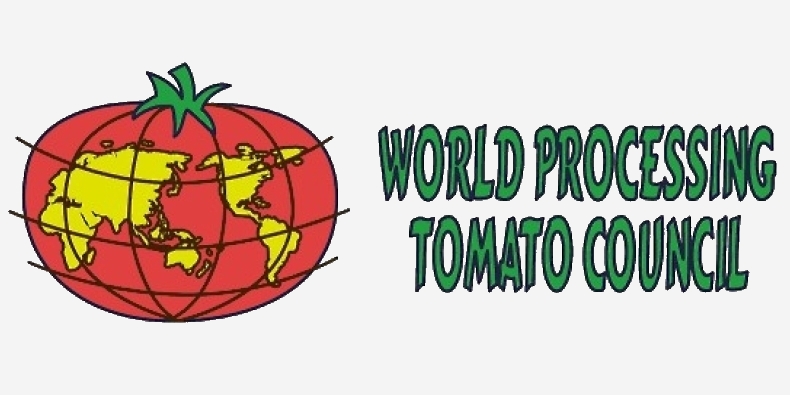 As the harvest is reaching its end, the global world production estimate currently stands at 37.2 million tonnes. This total will be readjusted next week during the WPTC meeting and the Tomato News 2022 conference which will be held in Parma on 25 & 26 October. 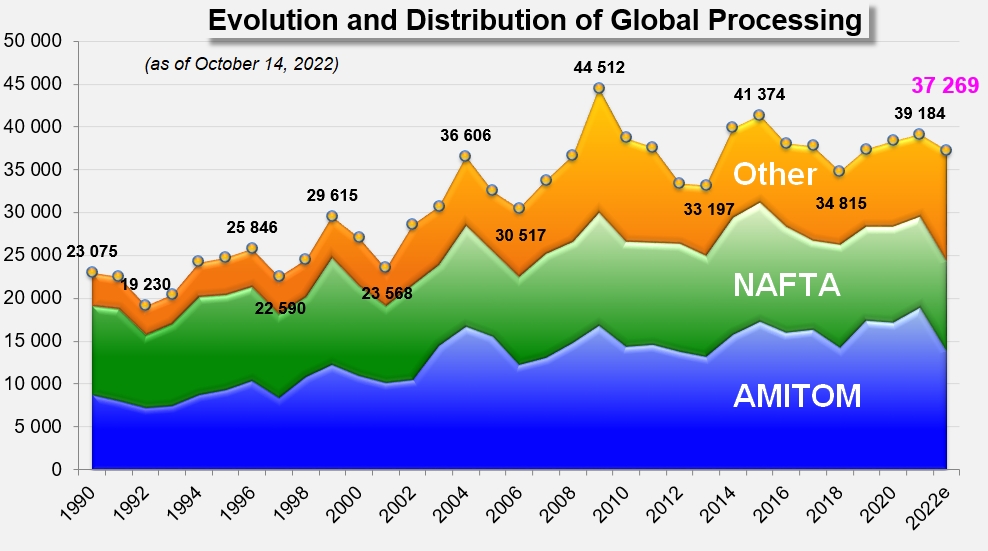 AMITOM countries
Egypt
There is no change to the forecast. The summer season during which all factories are processing is finished. The in-between seasons small Nili crop has already started, and the winter season which will start soon is looking promising.

France
We finished the season last week in the morning of Friday 7 October. From memory, this is our earliest and shortest season. Unfortunately, we only reached 141,910 tonnes, of which 25,172 are organic. The average brix is 4.87 and the penalties 6.42%. We are at 85-87% of the forecast according to the POs or the processors, but however at more than 100% for organic and only 83% for conventional. We do not yet have the average yields, but they are low in conventional, especially for the most productive zone usually in the Camargue. The South West zone of France was finally able to return to normal production after two bad years.

Greece
The season is now over. It has been a bad season overall with poor field yields resulting in lower volume processed than companies intended. Factory yields however were normal, with a good fruit quality.

Hungary
Following some rains in September, the harvest ended a week ago with about 80,000 tonnes processed with an average brix of 5. Larger surfaces were planted this year, but production could not be increased due to poor weather conditions.

Italy
In the North, the season ended with 2.89 million tonnes processed (94% of the contracted volumes), average brix was 4.84 and average yield per hectare 78 tones. These figures are better than the initial forecast, but lower than last crop. All processors claim for an exceptionally costly tomato crop due to extremely high cost for energy and packaging combined with lower processing yield.
In the South, two or three factories are still running, and it is estimated that the final volume will be between 2.58 and 2.6 million tonnes. The conditions were not too bad in September with not as much rain as feared so a bigger volume than expected was processed. Market demand is very high, especially for 3 & 5 kg cans, and stocks low so factories processed as much as they could. Costs however were very high with canned tomatoes estimated costing nearly double as last year to produce due to increased price of tomatoes and energy mainly.
Altogether the production in Italy will be close to 5.47 to 5.5 million tonnes.

Portugal
One plant is still running and will close next weekend. All other plants ended processing on 8 October with 95% of the contract quantities. There were some damages because of the rains, reflected in the reduced forecast indicated during the last meeting but the tomatoes that could be harvested afterward were of average quality. Overall brix this season was a bit lower than in 2021. The final figure will be close 1.3 million tonnes.

Spain
The last factory closed in Extremadura on 9 October. In the North the factories are starting to close but some will still work until the end of next week. Some rains are forecast for the next days. The final figures are not yet available, but the best estimate for Spain is 2.1 million tonnes. It has been a complex and difficult campaign affected by long heat waves in June and July and rains in September. Yields have been between 10 to 20% lower than usual.

Tunisia
No change from the last update.

Turkey
The harvest should be finishing in about a week in the Konya region where 4 or 5 factories are processing about 5 to 6000 tonnes per day. Colour is now pretty low. The overall estimate remains 2.35 million tonnes. 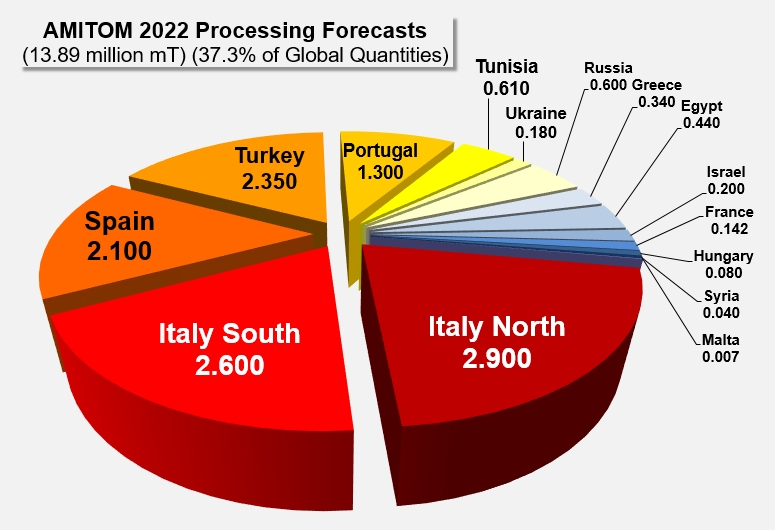 Other countries
California
According to the figures collected by PTAB, 582,981 short tons (528,871 metric tonnes) were delivered to the factories during week ending 8 October, with an estimated 354,316 short tons (321,430 metric tonnes) expected to be delivered during the week ending 15 October. This would bring the year-to-date total to an estimated 10,208,454 short tons (9,260,954 metric tonnes). Quantities delivered to the plants are declining quickly. Some factories, especially in the south, already closed for the season, but others will continue processing for a couple more weeks.

Other US states
Factories are still processing in Midwest but should finish up next week. The weather has been cool and dry and fruit quality is still very good.

Canada
Harvest is wrapping up with 589,521 short tons (534,804 metric tonnes), which just over 106% of total contract volumes being delivered to date.

Japan
The harvest will end mid-October, and is expected to be 27,000 tonnes, the same as the previous report.

South Africa
No changes to report. 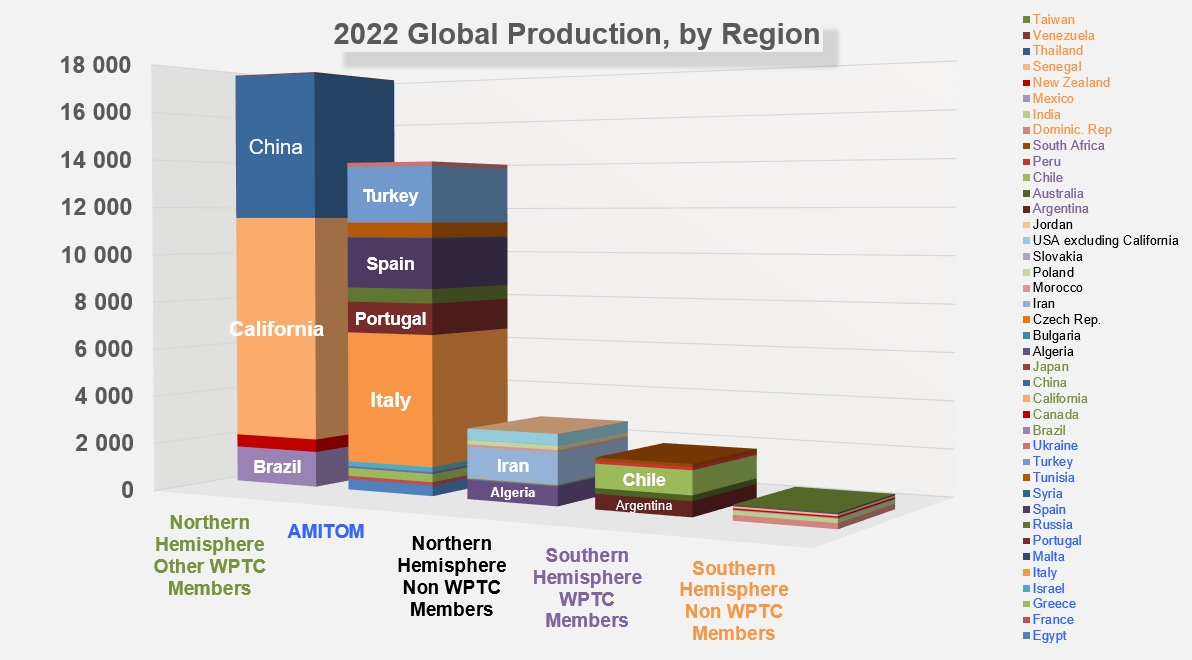 Canada: the best tomato harvest anyone can remember

A good 2022 season in Northern Italy