According to the report released on April 1 by the California League of Food Producers (CLFP), total U.S. stocks of tomato products as of March 1, 2022, were approximately 5.56 million metric tonnes (mT) (6.1 million short tons (sT)), raw material equivalent. These quantities are 5.1% lower than those recorded on March 1, 2021 (5.86 million mT).

The situation in March 2022 shows a slowdown in apparent disappearance, which, with a total of almost 7.8 million mT for the first nine months of the marketing year (June 1, 2021 - March 1, 2022), is down by 1.3 million mT, or more than 14% compared with the performance recorded last year (9.11 million mT) at the same date.
Over twelve months (March 1, 2021 - March 1, 2022), apparent disappearance (domestic consumption and exports) amounted to just over 10.5 million mT (11.6 million sT), a quantity about 10% lower than the corresponding performance recorded on March 1, 2021. With this last figure, monthly apparent disappearance fell below the symbolic mark of 1 million short tons for the first time since June 2008. Given the difficult context in which the US processing industry has been evolving for several years (drought, rising costs, contract difficulties), the reasons for this downturn are probably to be found more in the quantities available than in the competitiveness or attractiveness of the products themselves. As proof of the good performance of US products on the worldwide market, it should be noted that US exports of pastes have stabilized in recent years around an annual trade threshold of about 310,000 mT and even improved slightly last year with an exported volume of 319,000 mT in 2021 (see additional information at the end of this article).

According to the CLFP report, total bulk tomato paste stocks, including stocks for remanufacturing, were estimated at about 3.55 million mT raw material equivalent as of March 1, 2022, down 7% from March 1, 2021. At the same date, stocks of bulk tomato pastes for sale amounted to about 2.25 million tonnes (raw material equivalent), down 4% from the corresponding situation in March 2021.

As previously noted in our comments on recent inventory updates, the quantities present in U.S. factory warehouses at the beginning of March 2022 (5.55 million mT) are considerably less than they were four to five years ago (9.5 million mT in March 2017) or even ten years ago (8.4 million mT in March 2011). The drop in inventories has mainly occurred due to a reduction in the quantities of pastes, both in bulk for sale and for remanufacturing. Over the last five years, these quantities have been divided by two, while those of "other" products have remained practically stable. 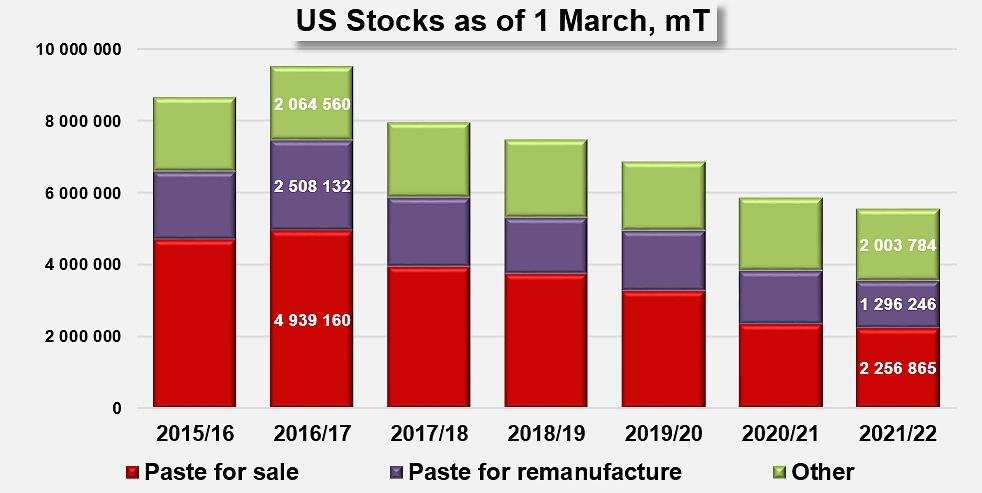 The situation as it appears at the beginning of March 2022 is slightly less tense than the figures from last December would have suggested. In the current state of inventories and given the rate of consumption, the quantities available should make it possible to cover apparent demand for nearly six and a half months, a duration close to the seven months considered at this time as satisfactory by the US processing industry. The "shortfall" defined by the March CLFP report is about 20 days, a significant improvement over the 56 days suggested by the update published on December 1, 2021.

Current apparent disappearance rates suggest an annual demand (domestic consumption and foreign markets) of approximately 11.6 million metric tonnes for the marketing year 2021/2022. This figure matches the total processing intentions announced by the US industry for the 2022 season, give or take a few thousand tonnes.

Some complementary data
Evolution of U.S. exports of tomato pastes over the last seven years. 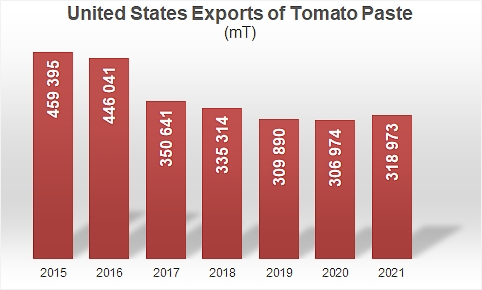