US inventories of tomato products as of December 1st, 2022 (comment)

According to the report released at the end of December 2022 by the CLFP, total U.S. stocks of processed tomato products, expressed in raw material equivalent, were approximately 6.918 million metric tonnes (mT) as of December 1, 2022. These quantities of products (physically present in companies' warehouses) are 640,000 mT lower (-8.5%) than for the corresponding period last year. They also represent the lowest level of stocks since December 1, 1998. 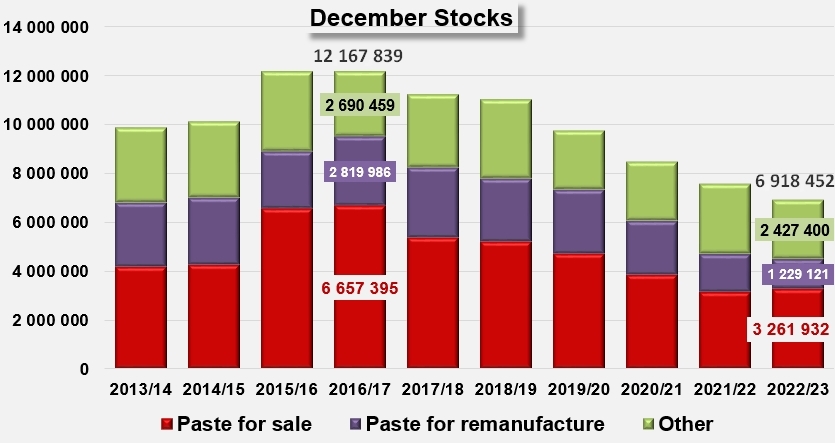 The six-month apparent disappearance rate of stocks of processed tomato products increased by 4.7% compared to December 2021, reaching about 6.065 million mT over the period between June 1 and December 1, 2022 – an increase of about 50,000 mT in monthly apparent consumption rate.

Nevertheless, it appears that, for the third time this year, the monthly rate of apparent sales over 12 months, from December 1, 2021, to December 1, 2022, remained below the 1 million short tons threshold, and resulted in an annual "consumed" total of only 10.64 million mT (or 11.73 million sT), down 4.5% from the 11.14 million mT consumed between December 2020 and December 2021. The respective distribution between exports and domestic consumption in these results is difficult to assess precisely. However, considering that foreign sales have increased again over the past three years (from about 300,000 mT exported in 2019/2020 to nearly 320,000 mT in 2021/2022), it seems likely that the slowdown is due to a decline in domestic consumption.

At the same time, this annual rate of stock disappearance is nevertheless higher not only than the quantities processed during the last season (9.5 million mT) but also higher than the average of the last four seasons. The accumulation of significant differences between the annual quantities processed and the volumes apparently consumed led to extremely tight year-end stock situations in 2021 and 2022, and this scenario is expected to be repeated in June 2023 (see additional information in the Appendix).

The CLFP estimates that total stocks of bulk tomato paste, including stocks held for remanufacturing, were approximately 4.95 million short tons (4.59 million metric tonnes) of raw product, as of December 1, 2022. These quantities are about 4.8% lower than in December 2021 and show a decline of about 14% in sales for the sector as a whole over the 12-month period.
Similarly, tomato paste stocks for bulk sale on December 1, 2022, were around 3.596 million sT (3.262 million mT), up 3.8% from December 2021. In this segment, CLFP figures show that quantities delivered to buyers over the 12-month period were down by about 15% from the corresponding period of the previous year.

This threefold decline – a reduction in the quantities processed, a slowdown in apparent consumption, and a decrease in stocks – marks a breakdown in the balance between processing and consumption, and is indicative of the difficulties of the US industry, like those observed by other national industries on a global scale, to produce and process enough tomatoes to meet demand. 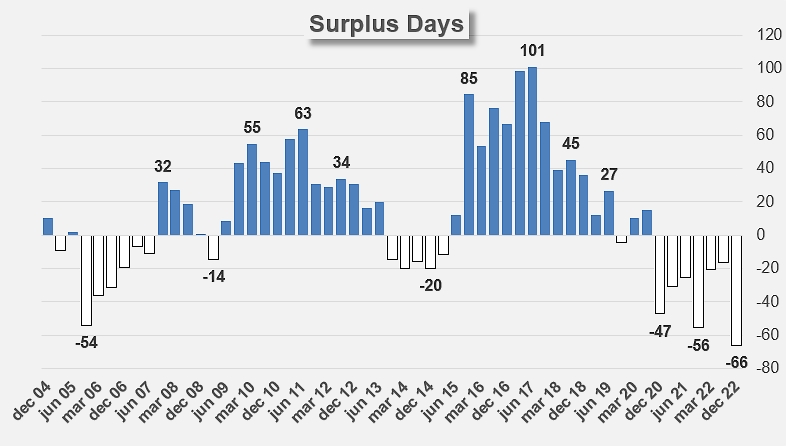 In fact, at the current rate of apparent disappearance, the quantities available in stocks should only cover needs for a little less than eight months, a deficit of about two months compared to what the US industry considers a balanced situation. In fact, if the current pattern of apparent consumption were to continue in the coming quarters, inventories as of June 1, 2023, could be below 1.5 million mT (raw material equivalent), the lowest level for the last 30 years.

The recurrent tension in terms of stocks is at the heart of discussions in preparation for the next processing season, both regarding the prices of raw tomatoes and therefore producers' motivation, and regarding quantities and therefore the willingness of agricultural and industrial partners to cope with potential risks. The dynamics observed show that the annual processing needs (domestic demand and exports) of the US industry are in the range of 11.25 million to 11.75 million metric tonnes, and more likely at the low end of this range, a figure that is slightly higher than the initial processing target for US processors (11.07 million mT) announced in January 2022. 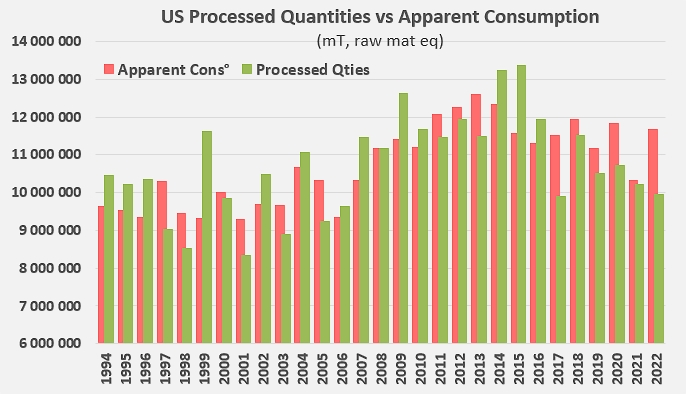 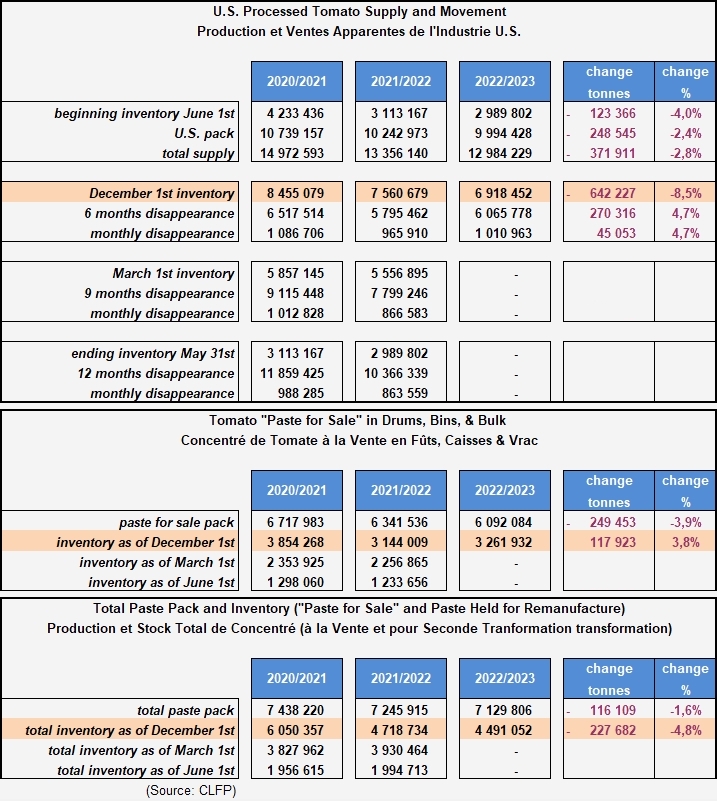 The latest CLFP report is also available on the CLFP website.
The CLFP report is an estimate of total U.S. supply and demand for processed tomato products, based on voluntary pack and inventory reports provided by participating U.S. processors. 2022-2023 pack year statistics are based on reports from processors handling 91.4% of U.S. tonnage. All positions are stated on a "raw product tonnes" equivalent basis. The CLFP "Pack Year" begins June 1 and ends May 31.
USDA no longer reports production for other states, so a three-year average of production for those states for the period 2017-2019 was assumed in calculations of 100% reporting estimates.

The 2022 Tomato News Conference: \"Euphoria in the midst of a recession\" 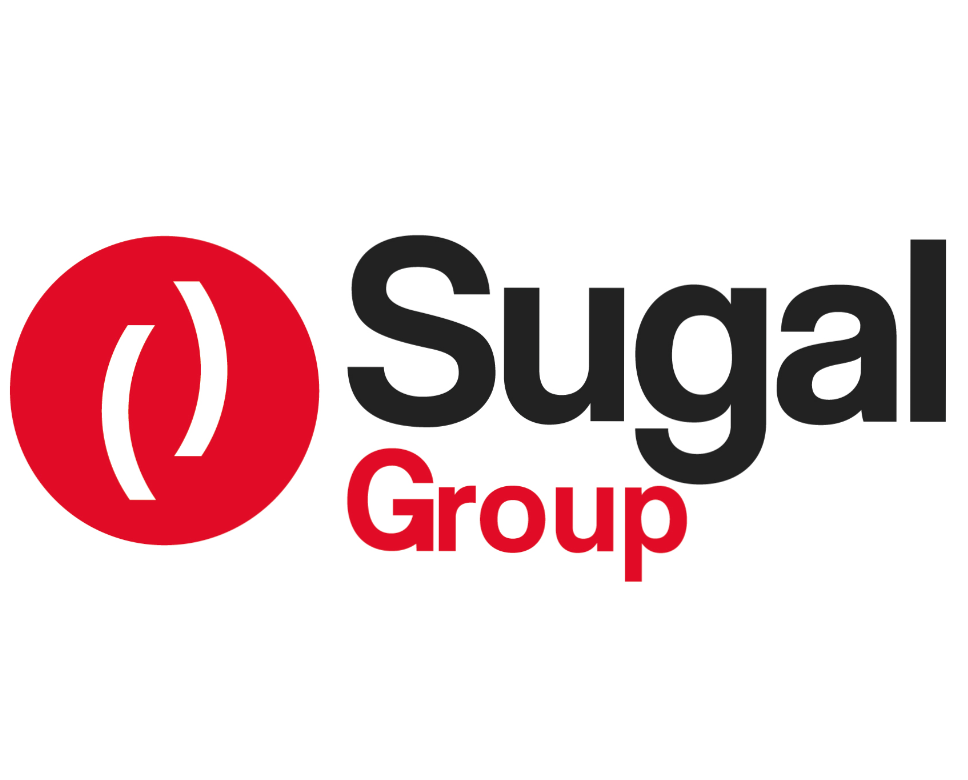