The most important item among British imports of tomato products - canned (peeled and unpeeled tomatoes, chopped, etc.) - recorded a dramatic drop in volumes in 2021: while foreign purchases of pastes or sauces were maintained or even increased last year, the quantities of canned tomatoes entering the UK between January and December (313,000 mT) fell by 22% against 2020 results (400,000 mT). However, it is important to put the extent of this decline into perspective, since it comes after two record years for imports (2019 and 2020) over all categories and particularly in the canned tomatoes sector. One of the reasons given by trade sources for these exceptional increases is the uncertainty surrounding the terms of Brexit until the December 24, 2020, agreement was reached, which led UK operators to build up "substantial stocks at the end of 2020" in order to avoid the possible introduction of tariffs. Some manufacturers in the sector also point to a drop in domestic consumption in 2021, which the pandemic had significantly increased during 2020 but which, according to the same sources, remained at a higher level than in 2019. 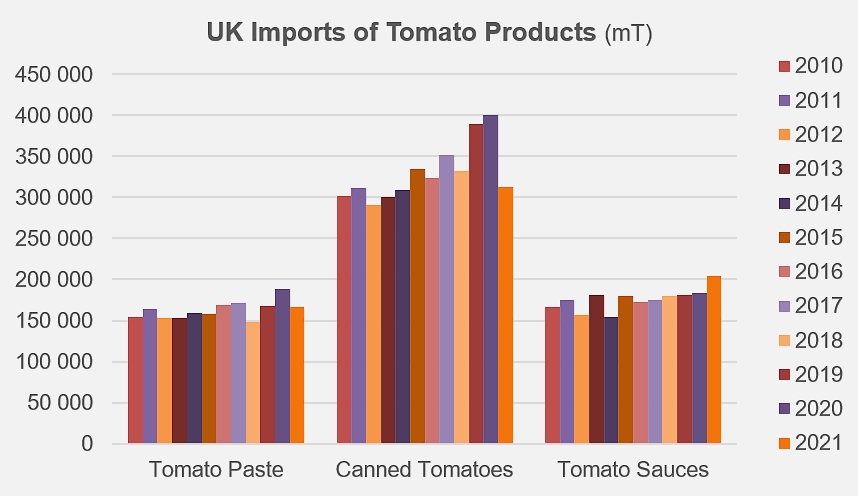 So taking into account the "stock effect", the quantities of canned tomatoes imported in 2021 seem to be in line with the levels recorded in the period preceding this episode of strong inflation in volumes, which were around 336,000 mT annually, or about 7% above the quantities imported in 2021.
In a detailed breakdown, the UK's foreign purchases of canned tomatoes have increased steadily in the category of products imported under codes 20021090 (see additional information at the end of this article) in recent years, while the category of products under codes 20021010 has shown signs of decline.
The main countries supplying the British market for this segment (codes 200210) over the last five years have been Italy (69% in volume), Spain (10%), Greece (6%) and Portugal (6%). Over the same period and on a broader level, countries of the EU-27 regularly supplied almost 99% of the quantities of canned tomatoes and sauces (codes 210320) imported by the United Kingdom and, more irregularly (see additional information at the end of this article), an average of 92% of the quantities of pastes (codes 200290). For this latter category, marginal quantities of products from non-EU countries were mainly imported from China and the United States between 2010 and 2020, countries that expanded their supply trade to Chile, Turkey and Poland in 2021.

The British market, the world's largest importer of canned tomatoes and sauces and ketchup, and the second largest importer of tomato pastes, spent approximately USD 713 million for its imports in 2021, which is 1% more than in 2020. The increase compared to the average expenditure in the three years prior to the Covid pandemic and the exit from the EU (USD 600 million) reached 19%, though it has affected the different categories unevenly. At USD 195 million in 2021, UK spending on tomato paste imports has increased by 27% compared to the average annual spending over the period 2016-2018. The USD 234 million spent on sauces and ketchup in 2021 exceeded the average expenditure for the period 2016-2018 by 29%. Finally, spending on canned tomato supplies (USD 284 million) increased by only 7%. 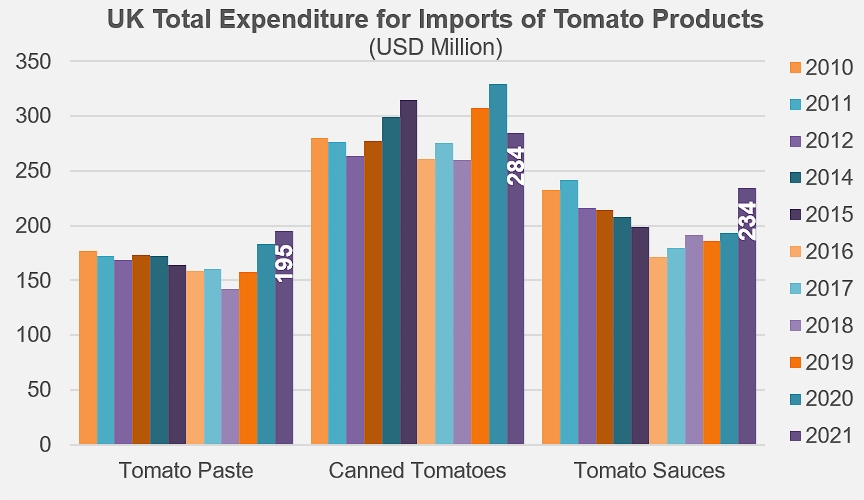 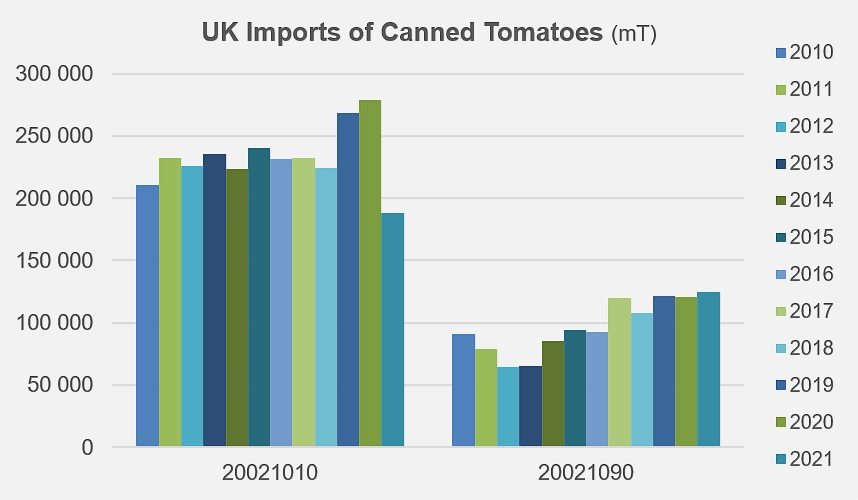 For the most part, the UK market's supply of canned tomatoes and sauces is held by EU operators. The supply of pastes is more diversified and competitive. 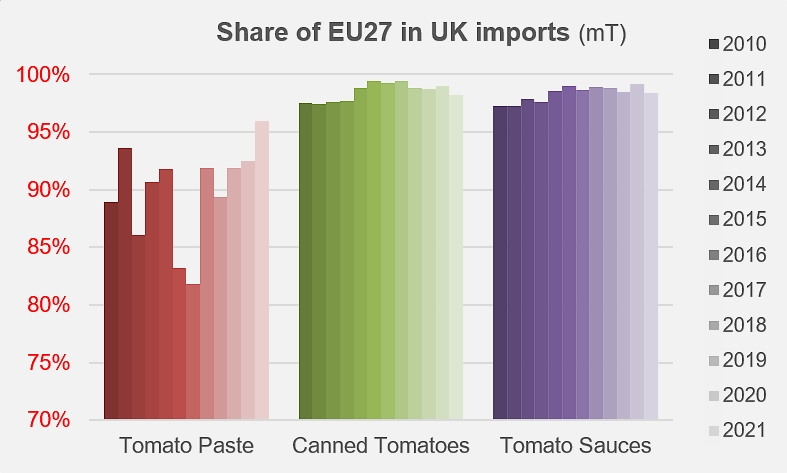 UK: a measured increase in imports in 2020