Exports of tomato paste (HS codes 200290) from Turkey have varied a lot in recent years, mainly due to the irregularity of annual processing results impacted by climate issues, but also because of the purchasing dynamics of the two main client regions of the Turkish industry, which are the Middle East and the Western EU. The quantities absorbed dropped from more than 180,000 mT of finished products in 2013/2014 to less than 130,000 mT in 2018/2019.
Obviously boosted by the effects of the Covid pandemic on global demand, the last two years have seen a sharp increase in Turkish foreign activity to levels higher than those of the previous five or six years. The 2019/2020 marketing year saw nearly 176,000 mT of finished products leave Turkish factories for foreign destinations, a dynamic that was confirmed over the last marketing year, despite the slight slowdown also observed in the results of other major exporting countries, with the quantities absorbed amounting to almost 162,000 mT. 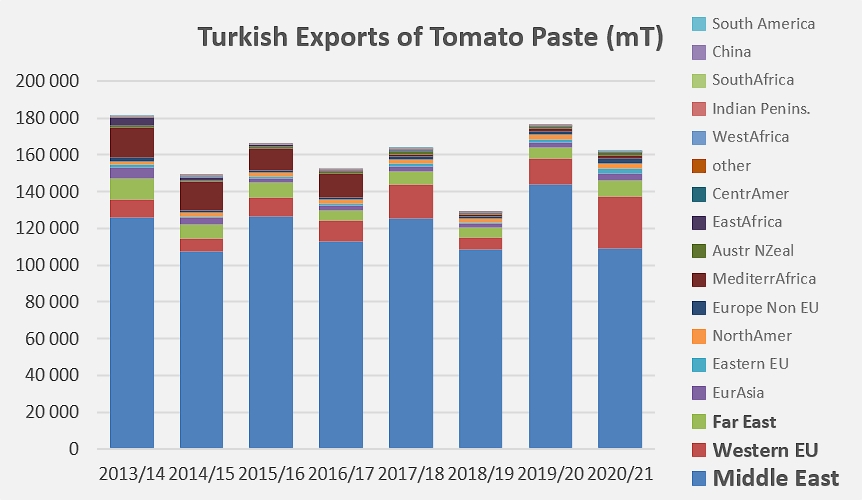 In the Middle East, the great irregularity of Iraqi purchases of paste and the sharp decline in Syrian, Saudi and Omani imports have strongly impacted Turkish foreign trade in recent years. At the end of a series of successive major annual variations (+11%, -14%, +33% and -24%), Turkey exported in 2020/2021 slightly more than 109,000 mT of tomato paste (about 35,000 mT less than in 2019/2020) to this region, which has accounted for 77% of Turkish outlets over the last five years.
Purchases of Turkish paste from the Western EU have been driven in recent years mainly by Germany and, to a lesser extent, by the Netherlands, France and Sweden. The 2020/2021 marketing year also recorded a noteworthy and almost completely new trade flow to Italy (about 7,500 mT).

Turkish foreign sales of paste are based mainly on two product categories (codes 200290390000 and 200290310000), whose results in 2020/2021 have been directly affected by the changes observed in terms of destinations: for example, the appearance of a trade flow to Italy resulted in an almost matching increase in exports in the category of 12-30 Brix paste in packs of more than 1 kg (codes 200290310000), while the sharp decrease in Iraqi purchases directly impacted the result of the category of 12-30 Brix paste in packs of less than 1 kg (codes 200290310000). (See additional information at the end of the article.) 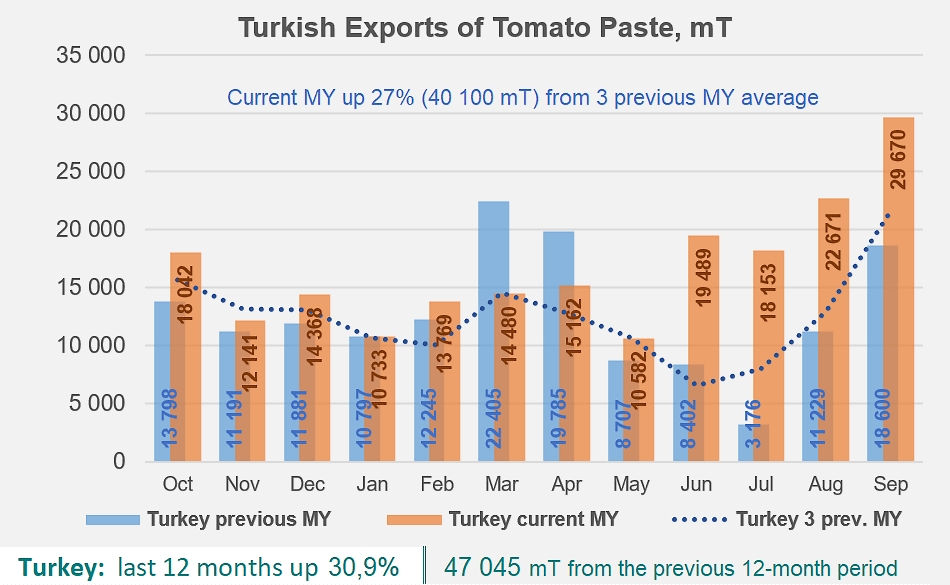 In total, revenues from Turkish paste exports for the last marketing year amounted to approximately USD 164 million, down significantly from the previous year (USD 206 million), but slightly higher than the average for the three marketing years (2016-2019) that preceded the “year of Covid”.
As well as these results, additional revenue was generated by sales of canned tomatoes (HS codes 20021) and sauces (210320), two categories in which Turkey's operations, although secondary to those of the world's leading countries, nevertheless account for 21-22% of the total value of the country’s exports of tomato products. The cumulative value of foreign sales of both categories has averaged USD 50 million per year over the last three years.

The value of canned tomato exports in 2020/2021 was USD 34 million, up 17% compared to the average value of the previous three years. This is the consequence of an acceleration in a dynamic pattern of marked progression for Turkish export operations, visibly unrelated to the pandemic, particularly to the United Kingdom, Italy, France and, recently, Portugal, which has increased the quantities absorbed from 15,000 mT of finished products in 2019/2020 to nearly 20,800 mT in 2020/2021 (see additional information at the end of the article).
Similar figures have been recorded for the sauces category, since the volumes exported last year by Turkey were close to 20,500 mT. However, unlike the canned tomatoes category, the upturn in trade observed in 2020/2021, based on a moderate increase in sales to the Middle East (Iraq, Syria, Emirates), has put a temporary break on what were clearly decreasing dynamics for the exports of sauces over the last few years, driven by the significant declines recorded for most Western EU destination countries (see additional information at the end of the article). 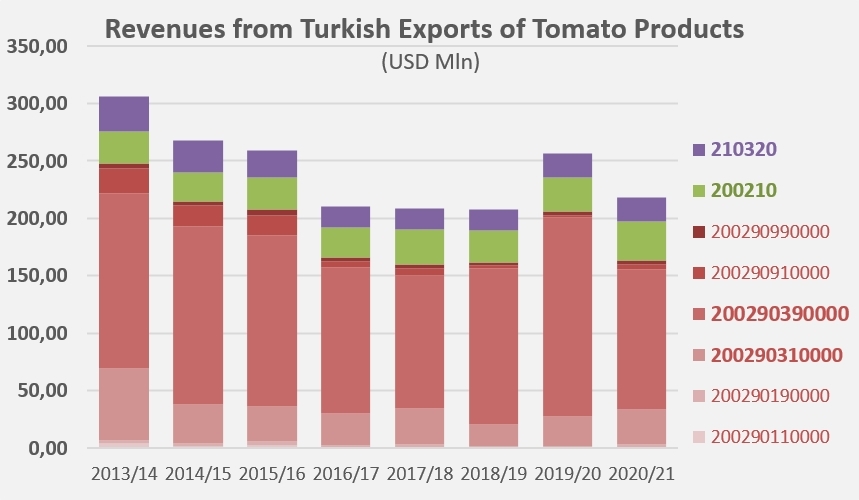 Evolution and distribution of tomato paste exports, by category 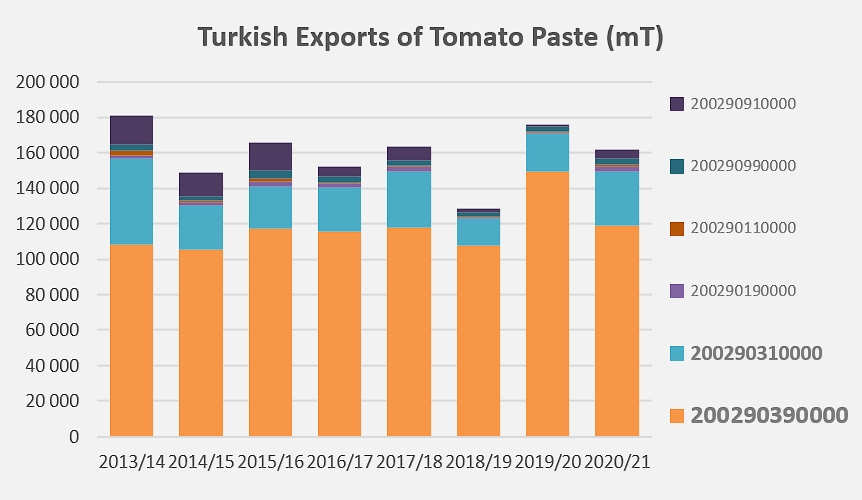 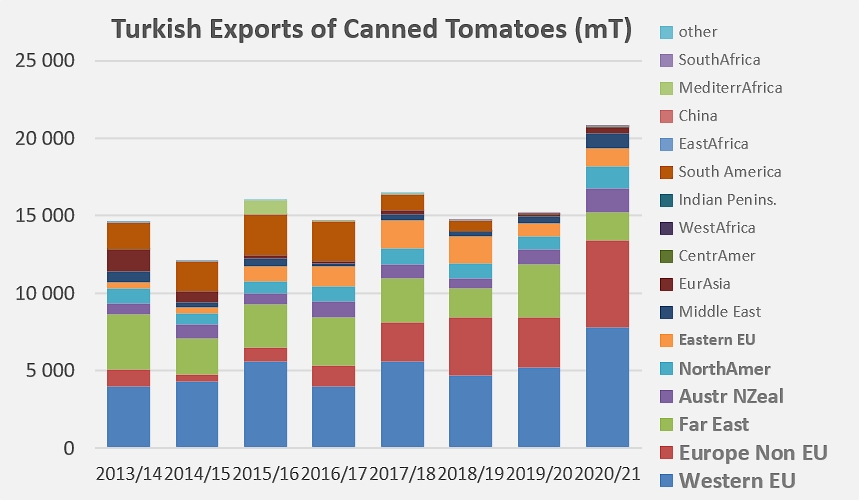 Evolution and regional distribution of Turkish exports of sauces. 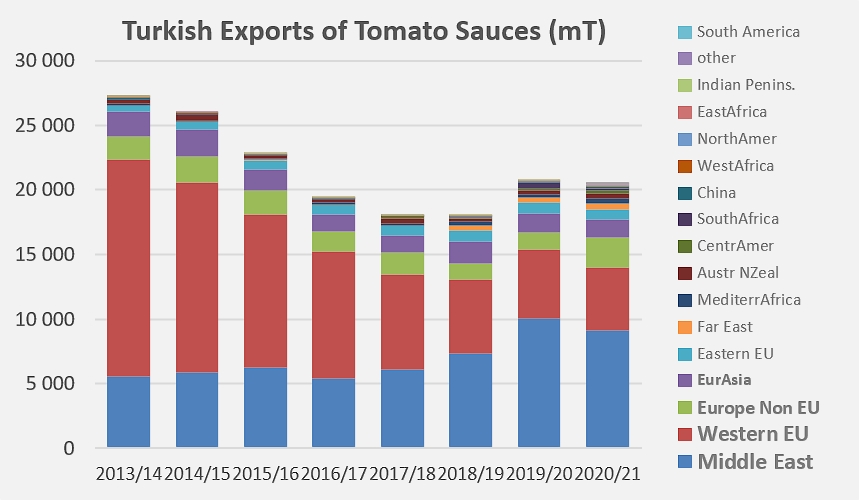