After several years of sluggish growth, leading to a degree of uncertainty in a hesitant and extremely tense context, the 2018/2019 marketing year recorded a slight break in the progression of the quantities of tomato pastes exported worldwide. Close to zero, sometimes even negative after 2011/2012, the average annual growth rates of global export operations did not allow the quantities involved to increase by more than a few dozen thousands of tonnes each year, until 2017/2018.
With the slight jump recorded last year (and an annual growth rate of more than 1.6%), the quantities of tomato pastes exported worldwide amounted to more than 3.46 million metric tonnes (mT) in 2018/2019, i.e. over 130 000 mT of finished products more than the average of the three previous years (3.33 million mT). This growth remains below the annual rates observed before 2011/2012 (close to 6%) but will nevertheless have enabled the TOP12 paste exporting countries to increase their overall result by more than 4% (in terms of finished products). 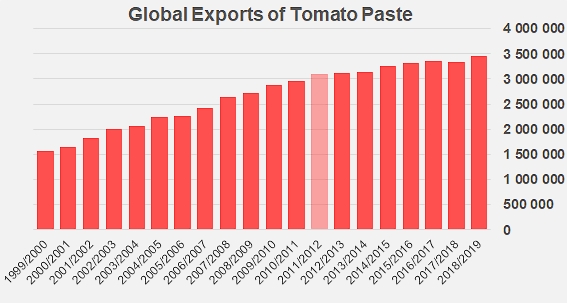 The expression of this result in terms of the raw materials used is less marked but remains encouraging for the sector. According to the available data and our usual estimates, for the first time in the history of the industry, global trade involved more than 20 million tonnes of raw tomatoes in their various processed forms in 2018/2019. This volume represents an increase of more than 603 000 mT of “tomato” as a raw material, compared to the average of the quantities handled during the previous three years (19.97 million mT); but above all it breaks sharply with the dynamics of stagnation, or even contraction, that have prevailed in the category of paste over 30°Brix in recent years, slowing the progress of the sector as a whole.
Between marketing years 2011/2012 and 2017/2018, tonnages mobilized by exports in this segment fell from 10.07 million tonnes to 9.7 million tonnes of raw material equivalent (-0.6% per year over the period). The start of a recovery recorded in 2018/2019 brought the global TOP12 performance of the paste segment for products over 30°Brix (which also includes dehydrated powders and tomato flakes) to more than 10.47 million tonnes, which is 686 000 tonnes (or 7%) more than the average of the previous three years.

The surge in exports in this segment has literally been driven by the spectacular growth of Ukrainian performances (+19% annual increase over the last seven marketing years, from 125 000 mT to 420 000 mT, in fresh tomato equivalent), as well as by the performances of Portugal (8% year-on-year growth, from 363 000 mT to 628 000 mT, fresh tomato equivalent) and above all of Spain (14%, from 878 000 mT of raw material absorbed by exports in this category in 2011/2012 to 2.22 million mT absorbed in 2018/2019). Similar progressions had already been recorded in previous years but had been "cancelled out" by the substantial slowdowns in the foreign dynamics of several other major countries (China, Italy, Greece, etc., see appendix) in this segment of global processing operations.
So the exceptional development of worldwide activity in 2018/2019 coincides with a slight increase in the influence of the world’s leading countries (Italy, China, USA, Spain, Portugal, etc.) on global operations, after several marketing years marked by the relative development of countries whose activity had hitherto been less decisive on the international scene.

However, it seems that the high concentration product segment has been the only one to benefit from a real improvement in terms of quantities. In 2018/2019, TOP 12 exports of pastes with 12° to 30°Brix of “dry matter” persisted along the hesitant lines observed over the past seven or eight years, taking the volumes of fresh tomatoes absorbed by this export sector around the world from 7.47 million mT in 2011/2012 to just 7.52 million mT in the last marketing year. The quantities (fresh tomato equivalent) absorbed by exports in 2018/2019 were more than 180 000 mT (-2.4%) lower than the average of the three previous years (7.7 million mT). According to customs declarations compiled by TDM, the significant downturns recorded by Chinese and Italian foreign operations in recent years have been the main factors of the decline observed worldwide, since in this same segment and over the same period, Ukrainian, Spanish, Chilean or Turkish foreign sales, to name only the most remarkable, have grown at impressive annual rates (see the export distribution diagram for this segment in the appendices presented at the end of this article).

In this industrial context where the long-term buoyant segments are becoming quite rare, the category of so-called "low concentration" products is increasingly the exception. The "shift" that seems to have deeply affected the other segments of global paste exports after 2011/2012 apparently has not impacted the family of products under 12°Brix, whose average annual growth rates have remained virtually unchanged over the past twenty years at around 3.5%.
The impact of this segment on overall processing operations remains limited, however, since it is proportional to the quantities of raw material – relatively limited given the industrial yields of the category – used for the production of this type of product. In 2018/2019, the quantities absorbed by exports in this category (1.10 million mT) "only" amounted to 96 000 mT (raw tomato equivalent), or about 9.6% higher than the average of the volumes absorbed over the three previous marketing years (1.005 million mT). The growth recorded in this segment is mainly attributable to Italian operators, who are the main proponents and drivers of this category, controlling almost three quarters of the global market share, insofar as the Chinese industry seems to be gradually withdrawing from the category and other countries active in this segment mobilize only small volumes for exports of this type of product (apart from Spain, perhaps). 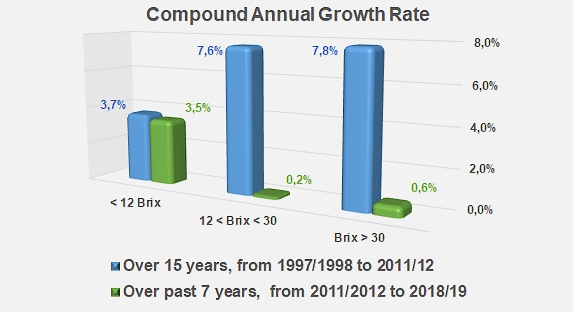 These deep trade dynamics only take on their full meaning in a broader context, where the increase in world exports of pastes recorded over the past marketing year reflects, downstream, a probable increase in demand, and implies, upstream, a strengthening of industrial and agricultural operations. Some sectors – and even more certain categories – have proven to be more buoyant than others in terms of activity for the agricultural tomato growing sector, and it seems clear that the support and development of the upstream segment (as far as volumes are concerned) will not be based solely on promoting the consumption of sauces on a global scale.

The dynamics and composition of exports have an undeniable impact on the level of agricultural activity. Thus, the increase in quantities of tomato products exported has brought the total of raw materials absorbed by world trade in 2018/2019 to around 27.3 million tonnes (mT), all product sectors combined. The progression compared to the previous year is quite modest (less than 0.8%), representing a little less than 210 000 tonnes of fresh tomatoes or the equivalent, more or less, of the entire Australian processing volume for 2019. This same threshold reached last year also marks an increase of a little more than 1% compared to the average of the quantities of raw materials absorbed by exports over the three previous years, that is to say a little less than 350 000 mT, or the equivalent of the processing volume of the US Midwestern states during the last season. Compared to the previous five marketing years, the increase driven by exports alone represents just under 790 000 mT of raw tomatoes or almost the equivalent of the quantities processed in Tunisia this year. Finally, a comparison of the exports for the three marketing years of the 2016-2019 period with those of the 2013/2016 period highlights an increase of more than one million tonnes of tomatoes, which is a volume practically comparable to all of Chile’s operations in 2019. 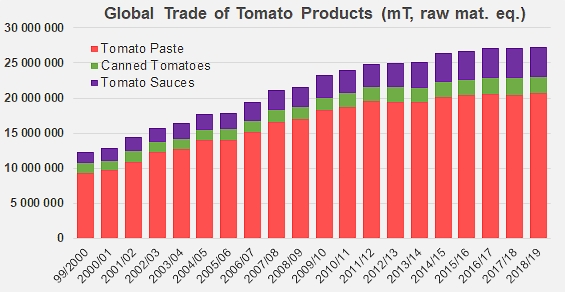 These results were produced in the context of a study of world consumption commissioned by the World Processing Tomato Council, which is due to be published in the 2020 Yearbook, distributed free to the participants of the World Congress organized in San Juan (Argentina) from 15 to 19 March 2020.

Some additional data
Exports of pastes (>30°Brix) over the past six marketing years.

Evolution and distribution of paste exports (12

For information, tomato paste export patterns according to category, for the eight biggest processing countries, since 1997/98. 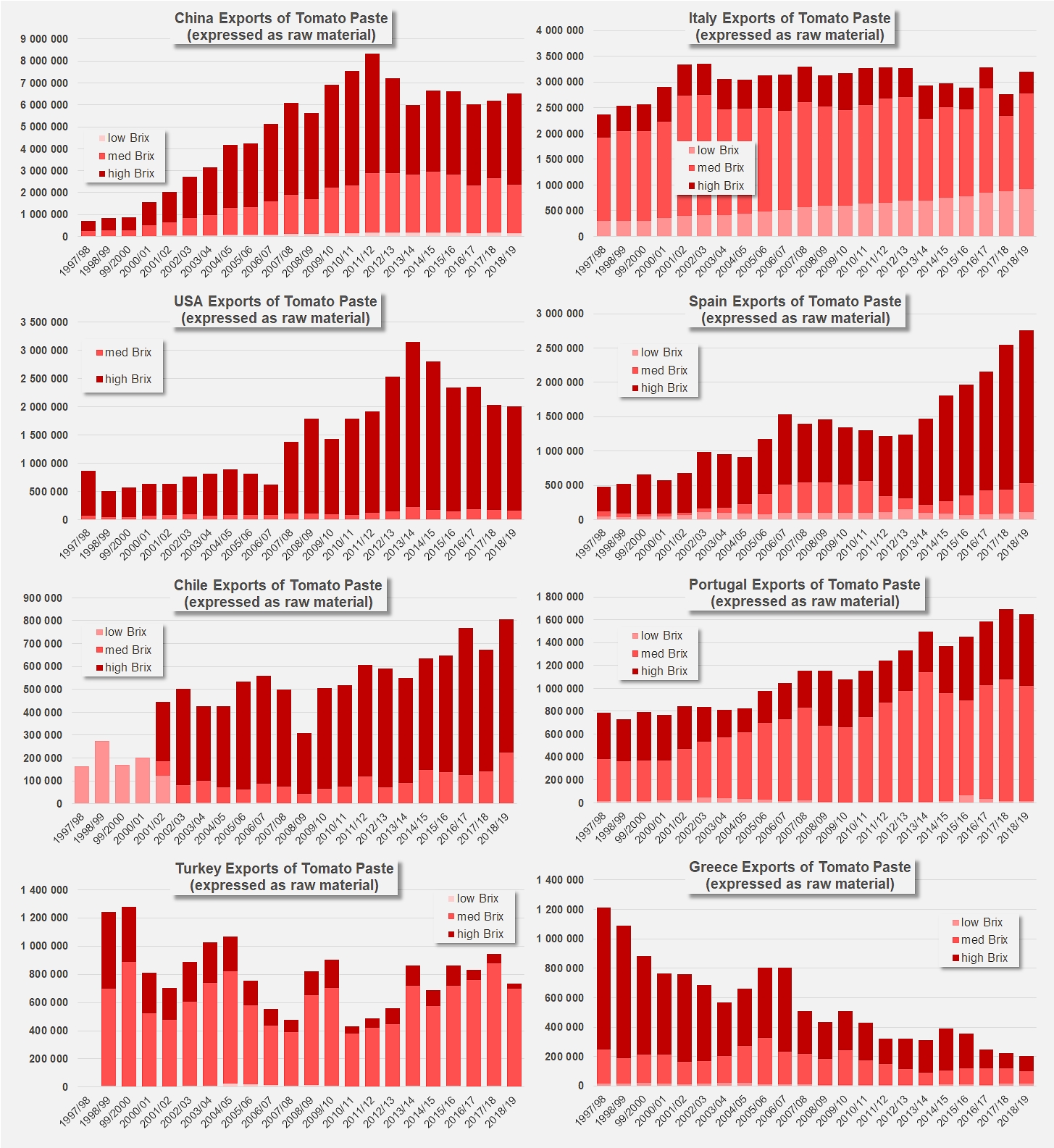