Notable increase in the worldwide tomato paste trade in 2020

Paste exports grew 4% over the past year
2020 confirmed the excellent results of the worldwide tomato paste trade, which has already been observed and commented in previous articles (see the references at the end of this article). Growth between 2019 and 2020 amounted to slightly more than 123,000 metric tonnes (mT) of finished products (which is an increase of approximately 3.7%), while a comparison with the final results of the average performance over the three previous years (2017, 2018, and 2019) shows a considerable progression of almost 250,000 mT, which is a remarkable increase of approximately 8%.
Over the past 20 years as a whole, this recent upsurge takes the industry’s annual average growth rate (CAGR) to more than 4%. However, it is important to mention the sharp contrast between the components of this growth before 2011, when its annual rate was close to 7%, and after that date when it dropped below 2%. 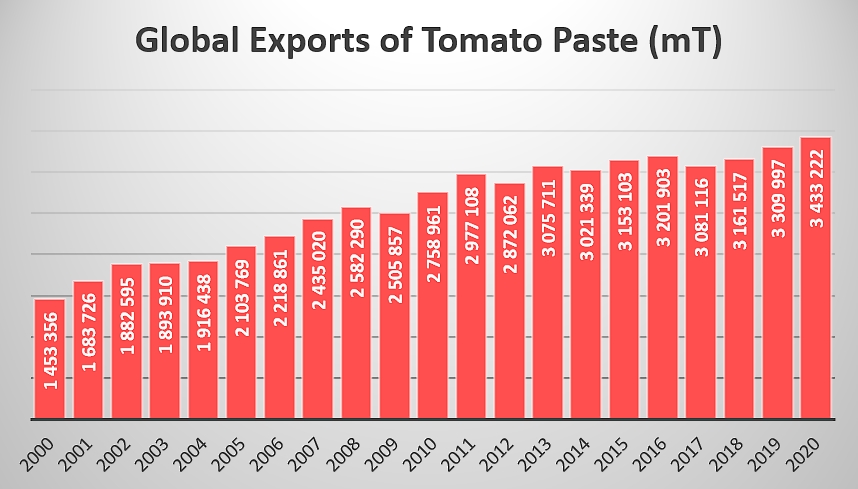 A significant part of this increase must be attributed to the effect of the Covid pandemic on the consumption of tomato products. However, this particular dynamic has not been uniform either in time or in space, affecting at different times and in quite contrasting ways the major processing and supply regions of the globe.

For instance, it is clear that the growth in European foreign sales (i.e. all exports from EU countries, including those shipped to other EC countries) has largely benefited from the crisis that arose last year. But it should also be noted that this only amplified a dynamic already well established since 2014 or 2015. By comparison, this accelerating effect of the pandemic observed in Europe completely ignored US exports, which even recorded a decline of 3,400 mT (-1%) against 2019 results. Neither did it affect the downward trend in US foreign shipments, whose quantities last year were nearly 25,000 mT lower than over the 2017-2019 period.

It seems that the Covid crisis, the first manifestations of which were spotted in Wuhan, 1,000 km south of Beijing, has clearly affected the Chinese industry, as the country’s foreign sales of concentrated purees in 2020 fell by more than 74,000 mT (-8%) compared to the previous year. The performance of the past year also recorded a significant decline (-35,000 mT of finished products) compared to the average level of operations over the three previous years (2017-2019), even before the commercial measures launched for reasons of human rights by the USA and other English-speaking countries against products from the Xinjiang region had produced their first effects.

Alongside these leading industries, which were adversely affected in the first case by an unfavorable exchange rate and in the second case by the unfortunate representation of being the "country of origin of the pandemic", several important secondary industries benefited from the “empty space” left by competition and were able to increase their trade in 2020. This was particularly the case for – in order of importance – Turkey, Ukraine, Peru, and Russia, and, to a lesser extent, Chile (see additional information at the end of this article). 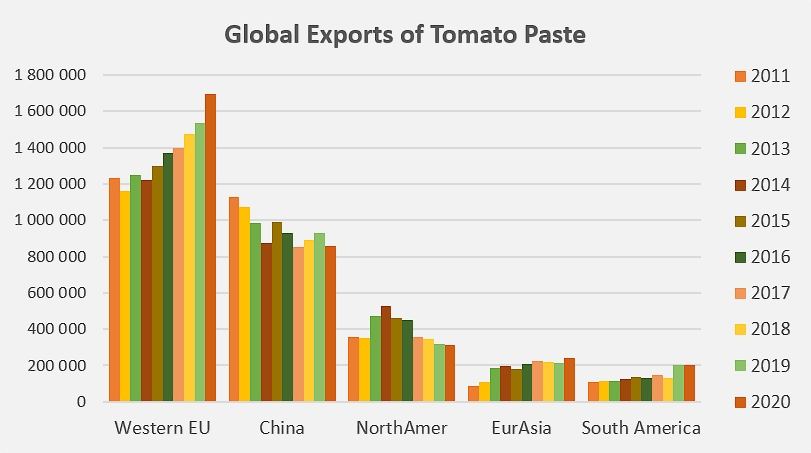 All of these results will be presented and analyzed in detail in our annual report on the architecture of global trade, to be published in our next Yearbook at the end of the 2021 processing season.

Some complementary data
Most of the overall export growth in 2020 is attributable to EU countries; the drops in results for China, the US, the Far East, southern Africa, and the Indian Peninsula are not shown in this graphic. 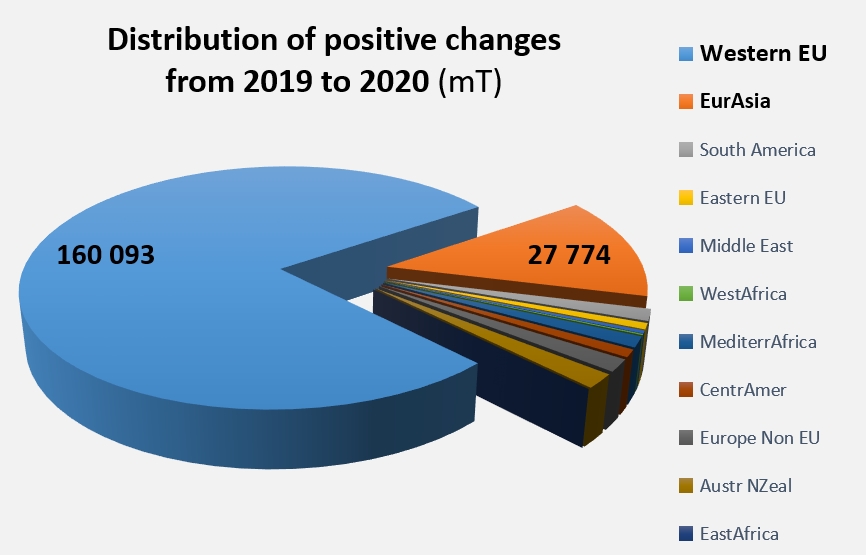 Trade results for the main countries that export tomato paste, over the past four years 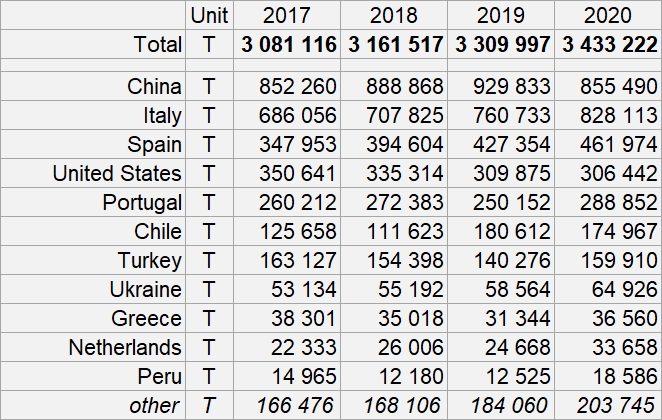