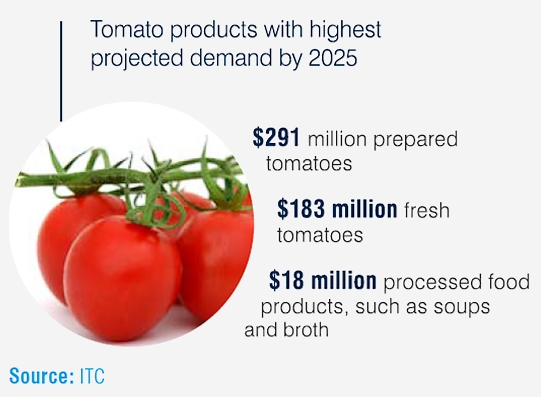 Tomato was introduced to cultivation in Iraq in the middle of the eighteenth century and now represents an indispensable food item in the daily life of any Iraqi. The country has the rare capacity to supply quality and healthy tomatoes to its population all year round, shifting from one production area to another.

Fresh tomatoes are the horticultural product with the highest projected import demand in Iraq (USD 183 million). With USD 291 million, demand for prepared tomatoes is even higher; and tomatoes are used as an input to several other processed food products, such as soups and broth (projected import demand: USD 18 million), and tomato ketchup and other tomato sauces (USD18 million).

Iraq’s domestic market for tomato products relies on imports from Turkey and Iran
This represents huge opportunities for the Iraqi tomato industry. However, at current demand levels, the full potential in the local market is not being realized by domestic tomato producers. According to FAO statistics, Iraqi domestic production of tomatoes and tomato products accounted for only 25% of domestic supply quantity in 2017, the most recent year for which data is available.
Processed tomato products such as tomato paste, ketchup and tomato-based sauces are popular, but many brands are produced outside Iraq. This is largely due to the lack of processing factories in Iraq, as well as competition from imported processed products from the Islamic Republic of Iran and other neighboring countries. The supply of Iraqi tomatoes may also be inadequate for processing, as producing tomato paste and sauces requires large quantities of fresh produce of specific varieties (e.g. tomatoes with low water content), which are not always available domestically. Most work at the processing factories is manual, although there are some machines, for example to slice or shred vegetables for pickling. The factories do not conduct any testing of products beyond simple visual inspection and they maintain relationships with trusted local farmers to help ensure quality. 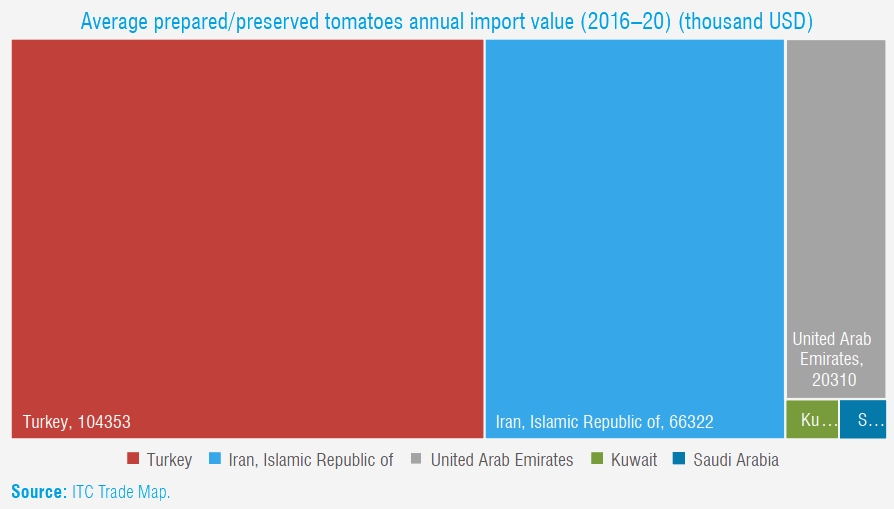 Iraqi consumers are eager for higher quality, healthier, local products
ITC (International Trade Center) conducted a consumer survey of close to 2,500 individuals within the framework of a domestic market analysis for selected agrifood products. According to survey results, most Iraqi consumers shop for tomatoes 1–3 times per week and many shoppers buy tomatoes in small quantities each time they shop for groceries. Consumers’ buying decisions when purchasing tomatoes are influenced by flavour, colour and local production. Most consumers (82 %) indicated flavour as the absolute main criterion on which they base their decision, which is most likely linked to history of purchases. Colour, often associated with flavour, was scored as having a high importance by 64 % of consumers. Similarly, 64 % of consumers indicated local production was another top criterion considered when purchasing tomatoes.

The strong performance of imports in the Iraqi market suggests the considerable scale of unrealized potential in domestic tomato production and value chains, which can be significant drivers of growth and job creation. On the production side, there are opportunities for expansion and enhanced competitiveness to meet this challenge. Production trends and sector strengths are identified as aspects to be built on in the strategy.
Mappings of the value chain and the institutional and policy context illustrate the relationships, supports and influences on the operations of farms and firms in the sector.
This sector strategy covers all tomato sector products. These include fresh tomatoes (commercial varieties of tomatoes grown from Lycopersicon esculentum Mill, of the Solanaceae family, to be supplied fresh to the consumer, after preparation and packaging) and frozen and preserved products such as tomato paste, canned tomato products and tomato sauces, as well as other prepared products using tomato.

Iraq’s varied soil and climatic conditions make the country well suited to the production of a range of varieties and a year-round production. In the winter season, tomatoes are produced in the desert conditions of Basra/Al-Zubayr and Samarra, and in spring production comes from Al-Diwaniya, Najaf and Karbala. In the summer, tomatoes can be produced in the Wasit, Al-K?t and An-Nu’m?n?yah areas as well as in Diyala. In autumn, the northern regions of Nineveh (Mosul and Sinjar), the Kurdistan Region of Iraq and Kirkuk represent the main producing areas.
Although tomatoes are the most commonly grown vegetable in Iraq, production has been expanding unevenly throughout the country. Production is highest in Karbala, Basra and Najaf. There are an estimated 14,000 farmers involved in tomato commercial production (World Bank figures). Tomato and other vegetable farmers often operate as family farms, using family labor and seasonal employees (typically 1–10 workers operating on less than 25 donums (2.5 ha) of land). In some cases, they will alternate between summer vegetables and winter crops, including potatoes and grain crops such as wheat and barley. Prices achieved for vegetables on the market are low and vary with seasonal demand.
Production is characterized by relatively low yields in comparison to neighboring producing countries. Many farmers lack access to needed quality inputs such as pesticides and fertilizers due to their cost. 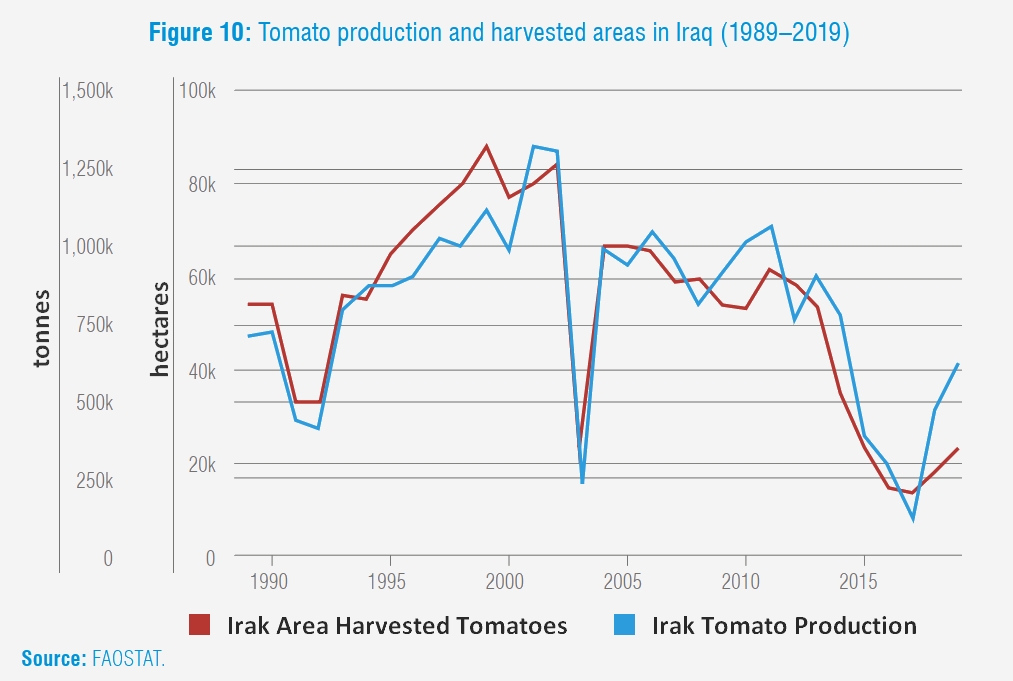 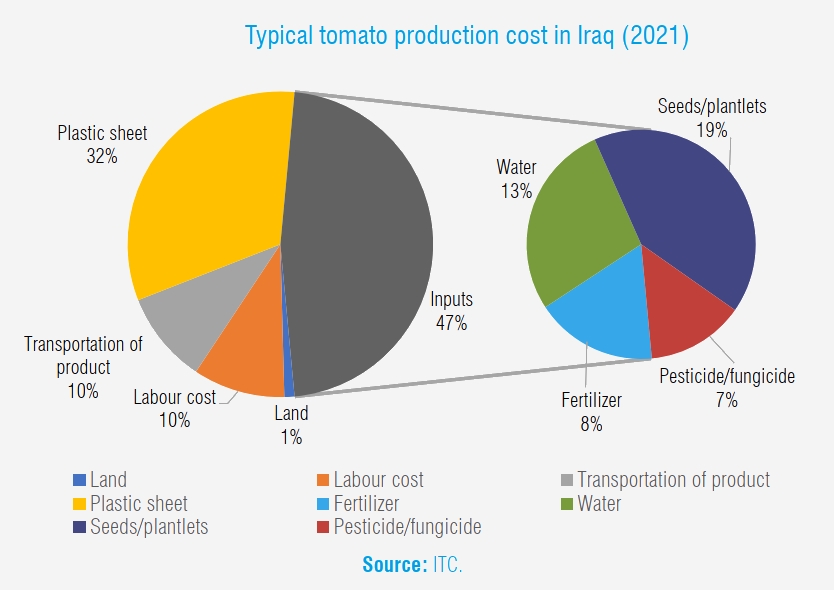 High transaction costs ultimately affect the share of the final price returning to producers and other stakeholders. Elevated transportation costs, checkpoints and various fees to enter the market, etc. decrease Iraqi producers’ competitiveness. During the various consultations, it was found that, under current conditions, Iraqi farmers can begin to be economically viable at a farm gate price level of approximately IQD 300 per kg (approximately USD 0.21 per kg).
Traders and distributors operate on both the local and national level and can be small- or large-scale operations. These stakeholders rarely purchase products directly from farmers. Most of the product is procured from local vegetable markets, to which farmers transport products themselves. Traders may sell to small local processors and shops, or to larger, further-away processing plants and supermarkets. Among the larger firms active in the sector, Khudairi Group is a wholesaler involved in the trade of tomato and tomato products. As of 2021, four Iraqi tomato-processing plants are theoretically operational –one in Duhok and three in Baghdad– and five are currently inactive.

Agri-food is a fertile spot for investment in Iraq’s non-oil landscape
Iraq's agri-food sector is one of the few segments of the economy that the private sector has been historically willing to invest in. The potential in the domestic tomato market has not go unnoticed by major retail international players, such as Carrefour, and national firms and retailers, such as Waffir, who are showing a growing interest and investing in the Iraqi tomato sector. 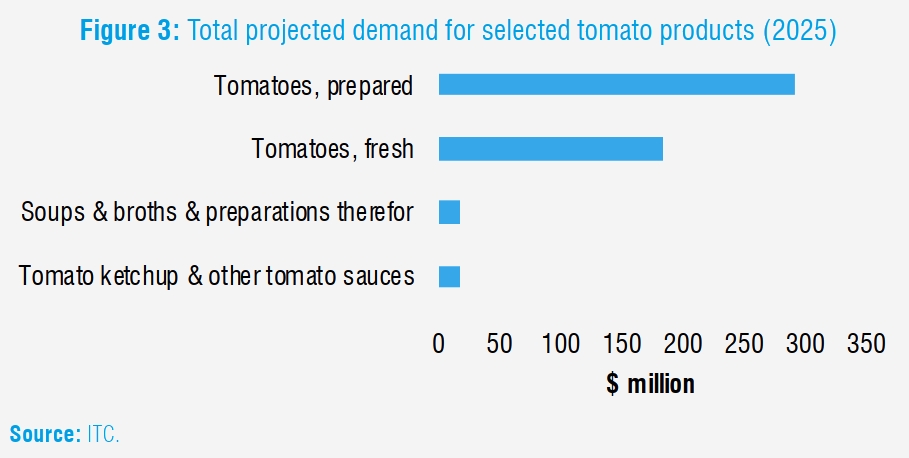 Some complementary data
Making it happen: facilitating business opportunities with international firms
Through the European Union-funded SAAVI project, the International Trade Centre (ITC) is helping interested international companies to explore market opportunities and build partnerships in Iraq. This support is provided at no cost and will be available until 2025.  The first Iraqi National Trade Forum organized in Baghdad on 28-30 November 2022 will be an opportunity to bring together around 150 agri-food companies for a B2B event, high-level discussions, and explore pathways to implement the Iraqi National Tomato Sector Strategy (2022-2026) jointly developed by the private sector and the Iraqi government.

ABOUT ITC
ITC is the joint agency of the World Trade Organization and the United Nations.
It works towards global prosperity by connecting small and medium businesses in developing countries to international markets. ITC’s goal is to help developing and transition countries achieve sustainable human development through trade.
ITC (intracen.org)

ABOUT THE IRAQ NATIONAL TRADE FORUM (28 to 30 November 2022)
The International Organization for Migration (IOM) and the International Trade Centre (ITC) are organizing the first Iraq National Trade Forum from 28 to 30 November 2022 at the Babylon Rotana Hotel in Baghdad. The event will combine high-level panels with practical workshops and business-to-business (B2B) meetings, and feature an exhibition of innovative firms under the theme “Made in Iraq”, with representation from all Iraqi governorates.
International companies are invited to express interest by completing a profile before 25 October 2022
Register at: https://forms.office.com/r/YMUSwVfqC0