How tomatoes could help battle droughts in California

30/05/2022 - Press release , François-Xavier Branthôme
Ingomar is "set to become the first company to grow plant-based drinking water in America."
Up to one billion litres of freshwater squeezed from tomatoes could be used to alleviate water shortages in drought-prone areas such as California.
Spearheaded as part of a partnership between Ingomar Packing Company and Botanical Water Technologies (BWT) - a sister company of the revolutionary Australian plant-based bottled water brand AquaBotanical - the scheme hopes to tackle the growing agricultural and urban needs in the state.
Set to be delivered to Merced, Fresno, Stanislaus, and Madera counties, some of the areas worst affected by droughts, the two firms may plan an expansion into other hard-hit areas in the US' most-populous state.
The water can be administered to customers through a number of schemes, such as community water sources for schools and mobile homes, water tanks for private homes, used as an ingredient by mineral water companies, groundwater and municipal water replenishment and even used for agricultural or hygiene needs. 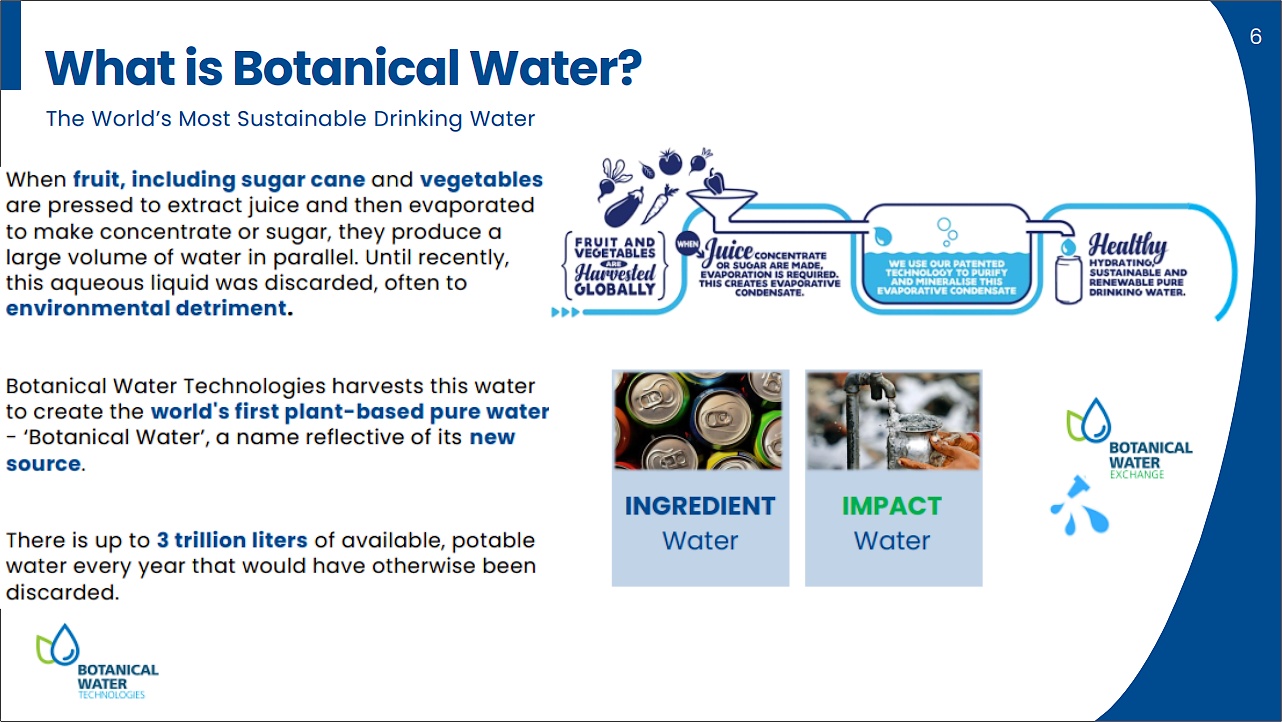 The tomatoes for the project will be delivered by Ingomar, which is amongst the largest suppliers of fruit in the US. Much of the fruit and veg we consume on a daily basis contains as much as 95% water and extracting it is relatively easy. BWT takes harvested fruit and presses it to extract juice; the system is capturing the water that is discarded during the concentration process. The firm claims a lot of water is made "in the process" and, until recently, it was discarded, often to the detriment of the environment.
It claims, rather ambitiously, that up to 100 million people could be given access to clean water through this and similar methods by 2025, although true numbers will be hard to gauge for now. It also claims that, globally, the equivalent of 3 trillion litres of water is discarded each year, and tech such as this could make a massive difference as the scarcity continues to grow. 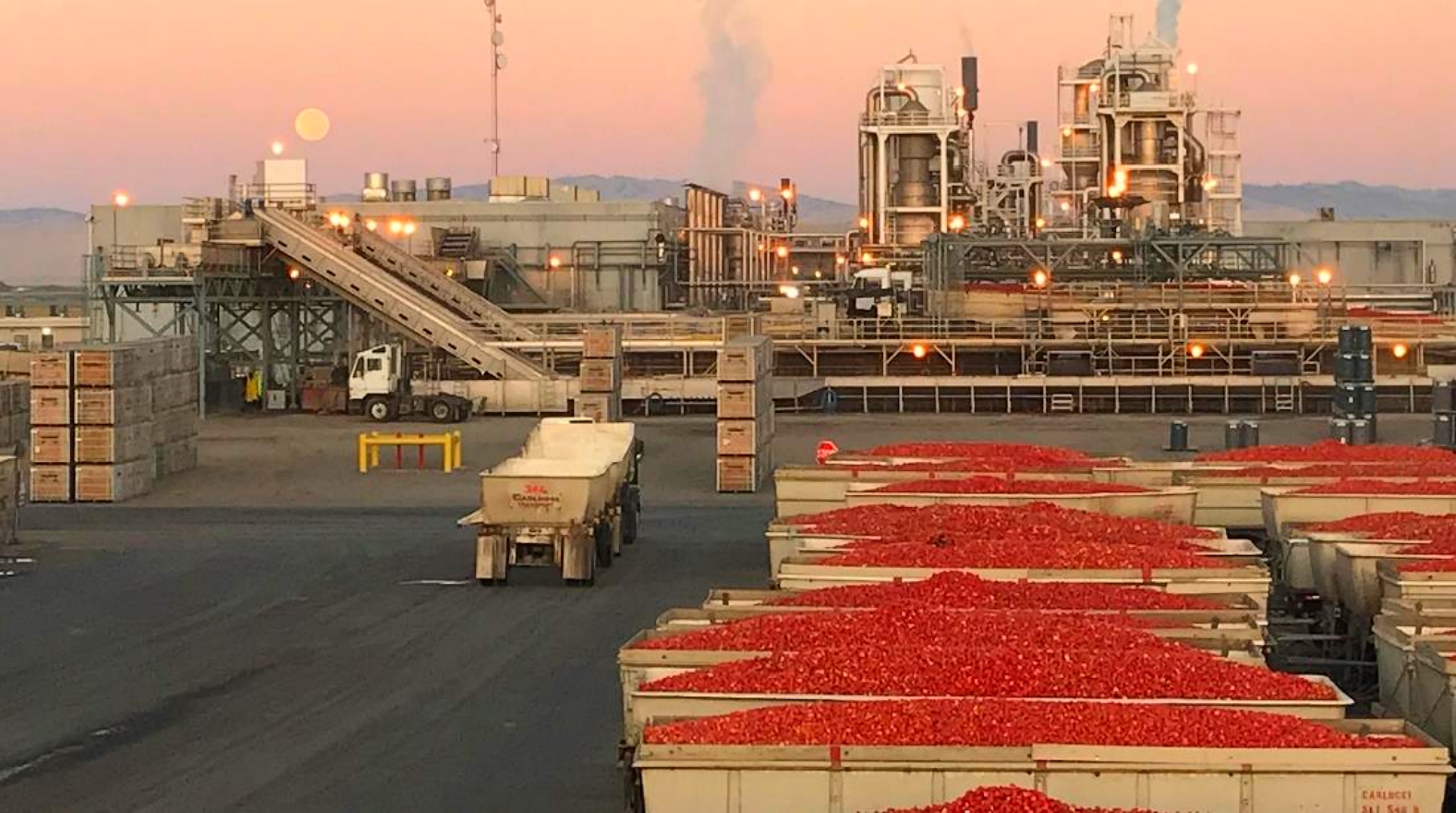 Ingomar's tomato production facility in Los Banos, California, USA.
The US is responsible for around 40% of the global demand for tomatoes, with the country producing around 10 to 12 million metric tonnes per year. California is by far the single largest producer, accounting for over 95% of the total. They are primarily grown in the Sacramento Valley and San Joaquin Valley areas and are typically grown in late January-early June with harvesting taking place between July and October. Typically, they have a growing period of a little over 120 days and harvesting period of 90 days.
Water shortages are only going to become more common due to climate change. Arid areas will see longer dry spells and currently lush areas may experience desertification (See related articles below). According to the UN, as much as 40% of the global population is at risk of water shortages, with two-thirds of the population - around four billion people - experiencing water scarcity for at least one month of the year. It is estimated that half of the people on Earth could live in areas with worse shortages by 2025. As such, finding fresh and clean sources of water is vital for the well-being of much of the planet, especially as the population continues to grow. 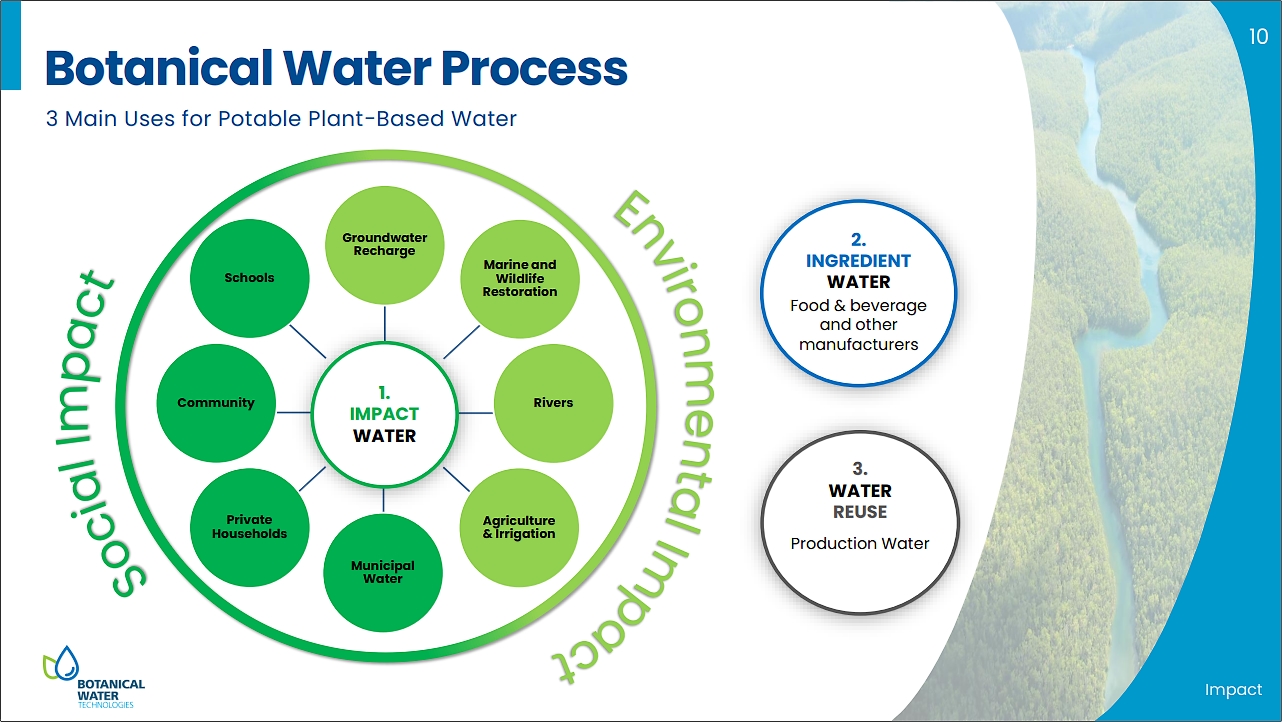 There are three main uses of BWT botanical water
BWT water is potable grade standard, so the highest and best use would be for drinking water purposes. However, because of the very large volume of water (BWT claims it could produce as much as "3 trillion litres" of plant-based water by 2025 with the partnerships it has forged around the world), it will be an ineffective use of water and logistically difficult to only use botanical water for drinking water. That is why some of our water is used for environmental purposes (agriculture etc.). Each tomato site will have a different % mix between impact, ingredient and reuse depending on their infrastructure, location and other factors.
Ingomar CEO Gregg Pruett claims they are "set to become the first company to grow plant-based drinking water in America. […] California is facing a water crisis and we are honored to be making a difference. Ingomar strives to be globally recognized as the premium supplier of industrial tomato products by consistently demonstrating their commitment to their employees, customers, and community," he added.
Ingomar has been making strides towards sustainability since at least 2010. Since then, it has significantly reduced waste and pollution in growing tomatoes, and has minimized the use of landfills. It is very important that projects that strive to aid in environmental or sustainability efforts do not end up causing more harm than good.
It claims as much as 1 billion litres (260,000 gallons) of water can be derived from its average 90-day harvesting season. It will also help alleviate the depletion of natural water sources and can even do its part to meet the global demand for drinking water.
Asked about the benefits of the system compared to the usual operation of processing sites, Chris Karkanis, Chief Operating Officer at BWT, explains that “currently, this water is being discarded and often to environmental detriment. Processing sites can now capture this water and positively impact people and the planet through more effective end uses.
The BWT business model specifically reduces the obstacles for processors to install and operate the Water Harvesting Units (WHUs) in their operation:
• Asset Finance, eliminates the need for capital cost by aligning the processor with an approved lender providing asset finance based on the demand generated from the Botanical Water Exchange (BWX) in conjunction with the volume and location of the processor.
• Zero impact to existing manufacturing operation as the WHU sits external to all production and is connected at the point of where condensate liquid is sent to waste.
• WHUs are manufactured, tested, commissioned and serviced, by external Engineering, Procurement and Construction (EPC) partners.
• Generate additional revenue streams and allows food processors to also be in the "water business", not just in the tomato business.
• Processors are facing limitations to the water they can drawdown from municipal sources. They are provided millions of gallons as production water that reduces, or in some cases, eliminates the need to withdraw from municipal sources depleting reserves.”
“Reducing all wastage from industrial processes is a key pillar of a circular economy. We are on an exciting journey to create up to three trillion litres of the world's first plant-based water and give clean drinking water to 100 million of the world's most vulnerable people by 2025,” Terry Paule, Co-Founder & CEO of BWT said.
“We want to be harvesting, purifying and delivering botanical water within a 200-mile radius to further reduce our environmental footprint."
The firm's name comes from its foundation to bring water to vulnerable people across the world. 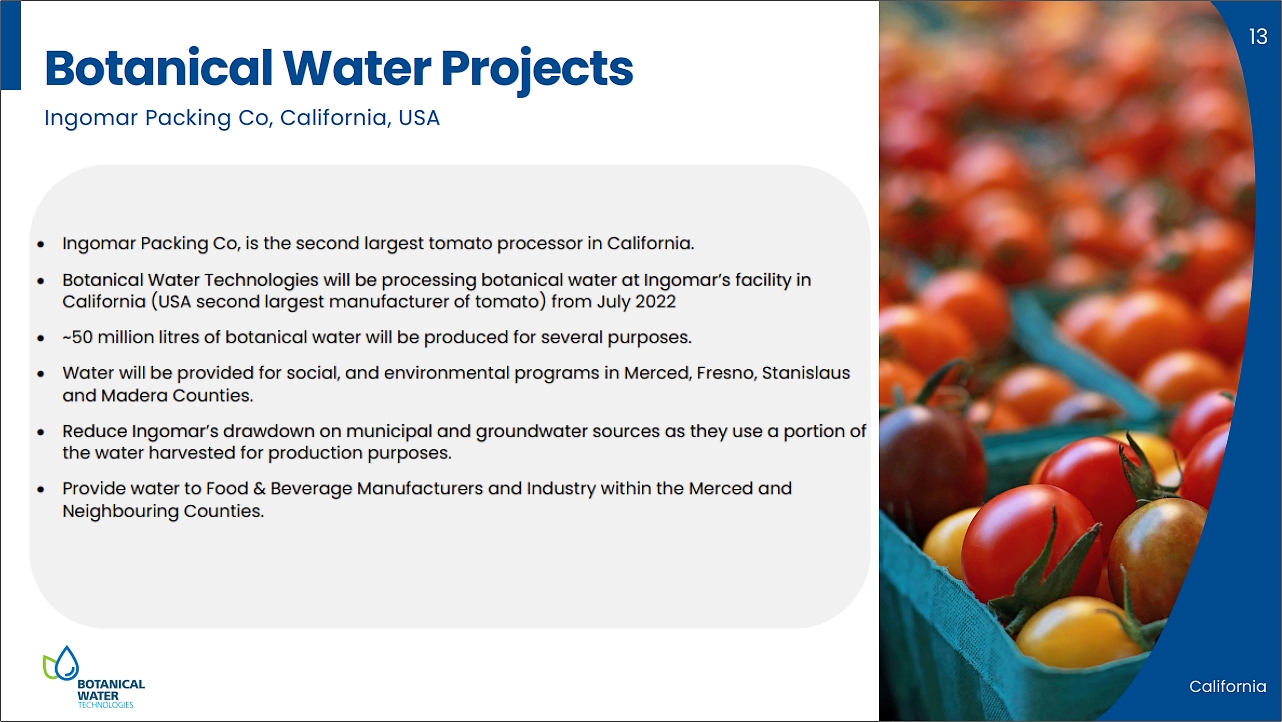 “The Botanical Water Foundation exists to deliver our botanical water to people who need it most, at no cost. Our foundation will then work with many charitable organizations and impact partners across the globe who have existing infrastructure. We can provide them free water, via charitable organisations and other impact partners. In doing so, we can reach the world's poorest people and positively impact millions of lives,” Paule added. 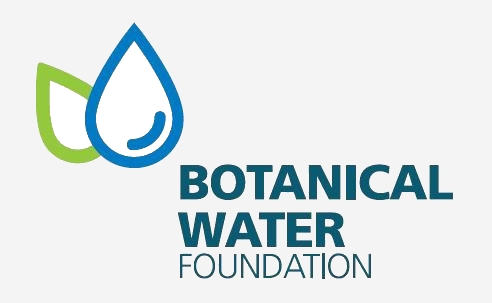 Climate change and its effects on Europe, the USA and Latin America

What is happening? What can we expect?