30/04/2018 - François-Xavier Branthôme - Lire en français
Although its production only accounts for a tiny proportion of the global processing output (1.2%), Greece is one of the rare countries whose products are exported all around the world. About 15 destinations absorb most of the tomato products exported by the Greek industry, to Europe as well as to the Middle East, the Far East, the USA, etc.
In total, more than 40 countries import and consume significant quantities of pastes, canned tomatoes and sauces of Greek origin. This widespread commercial distribution, based on operations that are 80% focused on foreign markets, means that Greece was able to rank 10th in 2017 among worldwide paste exporters, 4th among canned tomato exporters and 35th among exporters of sauces. In terms of revenue, it was able to rank 13th worldwide with a turnover for its exports of USD 76 million (approximately EUR 62 million on average over the past five marketing years). 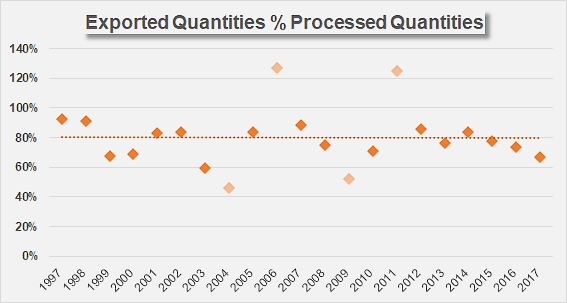 The Greek tomato industry only exports small quantities of sauces and ketchup. Over the past five marketing years, less than 2 500 metric tonnes (mT) of sauces were exported on average each year, for an average turnover of slightly more than EUR 3 million. These volumes remain relatively modest compared to the performances of the industry's major players, but they should not hide the fact that Greek operations for this type of product have grown spectacularly over the past ten years, from an annual 420 tonnes for the period 2003-2007 to 2 500 tonnes per year over the period running 2013-2017, with an average annual growth rate of 19%!

But sauces only account for 2% of the raw materials absorbed by exports and approximately 5% of the annual turnover. Greek operators mostly export pastes (38 300 mT in 2017) and relatively large volumes of canned tomatoes (close on 37 000 mT in 2017), a fact that is not so well known.
Foreign sales of paste have considerably drops over the past 20 years, mostly worn down by competition from more competitive processing regions and by an economic and industrial context that has been difficult within the country. This decline has mostly affected the segments of products with concentrations between 12° and 30°Brix (tariff code 20029031) and above 30°Brix (tariff code 20029091), in industrial pack (drums and bins), which used to make up the basis of the Greek industry's operations. In summary, tonnage has shrunk from more than 170 000 mT of finished products exported in 1998 to less than 40 000 mT last year, due to the drop in demand from the United Kingdom (-62% between 1997 and 2017), Italy (-99.6%), Germany (-83%) and the Netherlands (-63%). Over the past 20 years, the volumes delivered to countries of the western European Union have dropped 77%, from 111 400 mT in 1997 to 25 400 mT in 2017. A similar observation can be made for the trade flow to other countries of the European Community (in particular to Hungary), which have decreased by two thirds (from 28 000 mT to 9 600 mT), as well as the volumes shipped to Mediterranean Africa (Egypt and Libya), which have practically disappeared.
The collapse of foreign business in the paste sector has had a major impact in terms of revenue, which went from EUR 113 million for the period running 1997-1999 to approximately EUR 39 million for the period running 2015-2017. 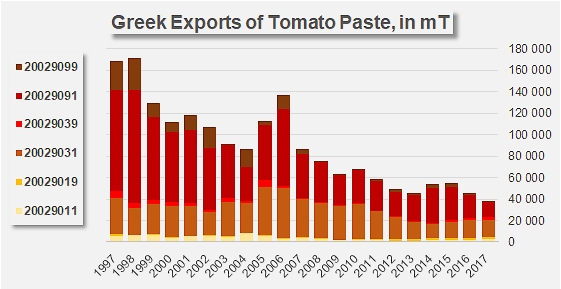 The foreign performances of the canned tomato sector have evolved in a completely different manner. Over the same period of 20 years, Greek exports of canned tomatoes, despite being directly in competition with Italian products on the markets of Britain, Belgium, the Netherlands and the USA – to only mention the main ones – progressed at a consistent and virtually regular rate of 5% (CAGR) per year. So the volumes exported grew from 10 500 mT in 1997 to close on 37 000 mT last year, taking the turnover from foreign operations of this sector from EUR 4.8 million in 1997 to close on EUR 21 million in 2017, which is an increase of close on 200% in 20 years.

It is a fact that the composition of Greek revenue from exports has been radically altered since the beginning of the 2000s. Once virtually the only profit-making category, pastes only generated 56% of the income stemming from foreign markets in 2017, at the end of a period of regular regression that has actually let canned tomato exports take up a lot more space. Last year, foreign sales of canned tomatoes (peeled, chopped, sliced, etc.) accounted for 37% of the revenue from export operations, whereas this sector only accounted for a modest 4% of the total in 1997. The progressive withdrawal of pastes from the distribution of revenue is also the consequence of the rapid development of sauce exports, which accounted for 7% of total foreign revenue in 2017. In the final count, canned tomatoes and sauces generated 44% of export revenue in 2017, and it would not be surprising if in a few years, these two categories account for an even greater share of the country's turnover from exports.

Lower volumes exported, but with higher values
A comparison in the evolution of the quantities of raw materials absorbed and the turnover generated by operations on foreign markets shows that the Greek industry, despite the difficulties that have led to a slowdown in foreign operations, has been able to "cushion" the effects of the drop in quantities by efficiently improving the profitability of each tonne exported.
Between 1997 and 2017, exports progressively decreased, particularly in the paste category. This fallback has led to a drastic reduction in the quantities of raw materials used for producing industrial products aimed at foreign markets, which could be estimated at approximately 1.1 million tonnes of raw tomato in 1997 and 270 000 tonnes of raw tomato in 2017. At the same time, total revenue from foreign sales has dropped from EUR 123 million in 1997 to EUR 56 million last year (-49%).
But the marked development of foreign sales in the sauces category and, even more so, in the canned tomato category, whose weight-for-weight value is far greater than paste in industrial formats and qualities, has limited the economically devastating effects of the lost market shares worldwide. 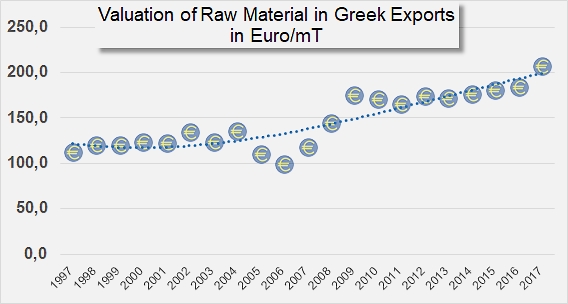 By refocusing production on more elaborate product categories, the Greek industry has at least initiated a new set of dynamics that is more than likely to carry fruit in the years to come. Already, the value of each tonne of raw tomatoes processed for distribution on foreign markets has been greatly improved in recent years: over the past 20 years, the value of each tonne exported has grown from EUR 112-113 to EUR 207-208. Without this shift in dynamics, Greek exports of tomato products would have only generated slightly more than EUR 30 million in 2017, which is barely one quarter of the amounts generated in 1997. In comparison, this figure is well below the purchasing budget of the 420 000 mT that Greek processors expect to process in 2018, which amounts to approximately EUR 34 or 35 million.

This virtually twofold growth in value for each tonne of raw materials aimed at the export market is a performance in and of itself, based on a balance that is financially more focused on the "products" components of export operations. This growth over 20 years is the best progression of the worldwide TOP13 processing countries, ahead of the performances of Germany, Italy, Portugal, China... It also ranks the tonne of Greek raw materials in seventh place among the world's leading processing countries, very close to the average of the TOP13 (EUR 199 or USD 217), behind the United States but ahead of Spain.

Outlets for Greek products
The European market, particularly in countries of western EU, is the main outlet for Greek foreign sales. Double concentrated and triple concentrated paste is shipped to companies for remanufacturing in the United Kingdom, Poland, the Netherlands and Germany. Canned tomatoes are exported to the United Kingdom, to Belgium and to the Netherlands. So a major proportion of the turnover originates in neighboring countries or countries that are relatively close geographically. Greek sauces are mainly aimed at the Japanese markets, which, along with Bulgaria, Saudi Arabia and the USA, among others, account for a very large quarter of the revenue generated by Greek exports.
Given the future exit of the United Kingdom from the EU, the trade context after Brexit will take on a major importance for Greece, as it will for Italy and other European countries whose commerce is largely aimed at this country. Over the past three years, the UK's invoice for supplies of Greek tomato products (EUR 22.5 million on average) has accounted for more than 36% of the total Greek turnover. It is also important to note that this figure has declined rapidly in recent years, falling from EUR 25.5 million in 2015 to EUR 17.5 million in 2017. 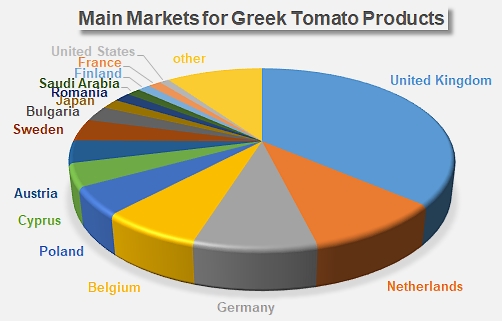 Distribution of the average turnover over the past three years 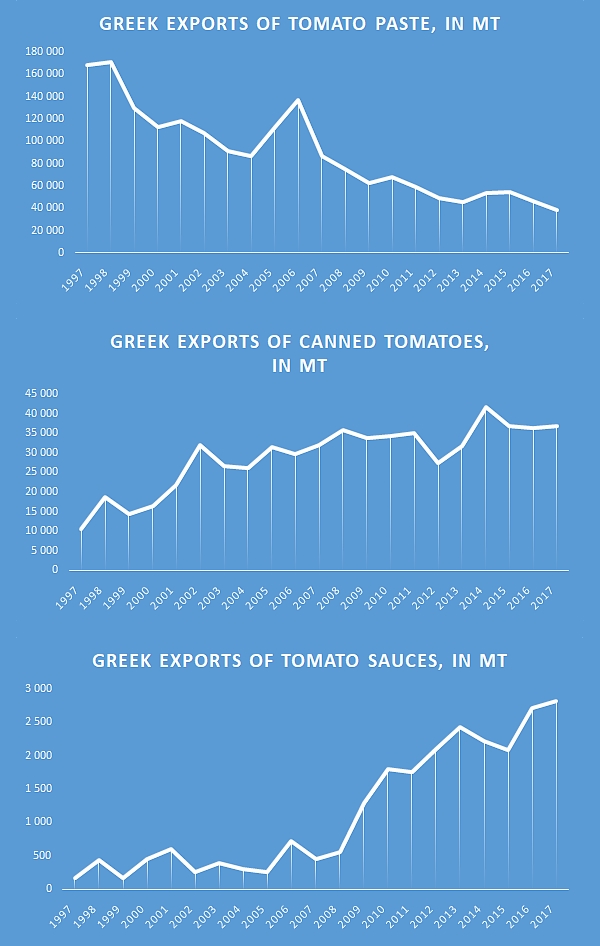 Evolution of the composition of revenue from Greek exports 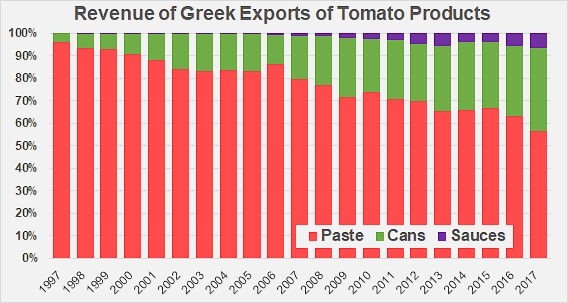 This increase in value of raw materials on the export markets is a feature of the specific composition of each country's business operations, which vary according to the contribution of each product sector to the overall profile of exports.
A detailed comparison of results (evolution since 1997 and situation in 2017) of the main leading countries on the worldwide market for this business sector will be the focus of a complete report that will soon be available on the Tomato News website. 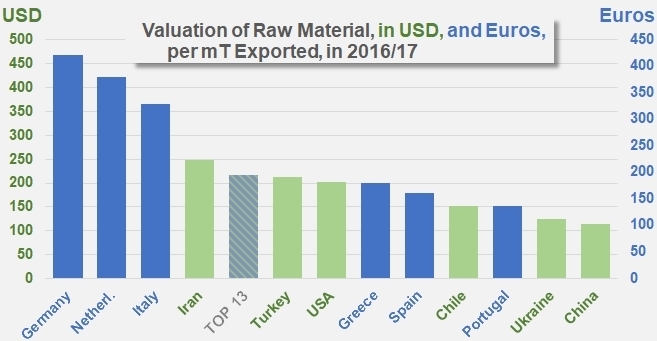 Average value of raw materials absorbed by exports over the 2016/2017 marketing year, according to country, in USD and in EUR, per metric tonne
You can use our search facility to explore our extensive directory of everyone linked with the tomato processing industry, by location with the MAP facility or by specific keyords with the FILTER option.