08/06/2022 - François-Xavier Branthôme - Architecture of Trade
Monthly pace of tomato paste imports remains high
The total quantities of tomato paste imported by the Top20 importing countries over the past twelve months (March 2021 – February 2022, pending on Russian results) were approximately 27,000 mT (1.7%) lower than in the previous corresponding period, but 108,000 mT (8%) higher than the average of the same periods of the three previous marketing years.
As a reminder, the average monthly quantities imported by Russia over the corresponding periods of the past three years amounted to just over 10,000 tonnes.
Comparison of monthly imports over past two years
Along with its monthly summaries of the prices for pastes and canned tomatoes and of the performances of the world’s main tomato paste exporting countries (see linked articles below), Tomato News is presenting updated figures of the supply volumes shipped each month by the main consumer markets for tomato products.
For tomato paste, alongside the combined figures for the Top20 importing countries, this article presents data for France, Germany, Japan, the Netherlands, Poland, Russia and the United Kingdom; canned tomato imports for Belgium, Canada, France, Germany, Japan, the Netherlands and the UK; and finally sauces & ketchup imports for Canada, France, Germany and the United Kingdom. This provides a regular and representative overview of the situation and trends of global demand.
Tomato Paste (HS codes 200290)
Imports of pastes to the twenty most dependent countries (whose domestic consumption depends solely on external supplies): for greater clarity, the histograms now present as an additional reference the curve (blue dotted lines) of the average activity of the same months of the three previous marketing years. 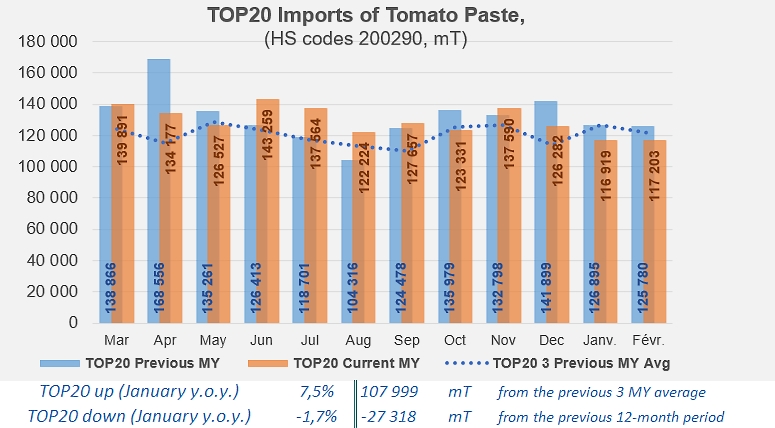 Canned Tomatoes (HS codes 200210)
The seven countries presented accounted for 66% of the sector’s total imports on average over the last five years, with the remaining 34% distributed over approximately 90 countries.

Tomato Sauces (HS codes 210320)
The four countries presented accounted for 47% of the sector’s total imports on average over the last five years, with the remaining 53% distributed over approximately 92 countries.

This information is sourced from trade statistics provided by the various national customs services of the countries concerned (all of which are regularly audited for reliability by information-collecting services at a worldwide level), as well as from other official or professional sources. Countries are listed in alphabetical order.
This monthly summary can evolve, and should evolve. So do not hesitate to contact the Tomato News team in order to obtain specific results or suggest extending the list to other countries where markets are significant.
Source: Trade Data Monitor LLC, professional sources
Related articles