15/07/2019 - François-Xavier Branthôme - Lire en français
EU currently recording a slightly positive trade balance
As of 1 July 2019, the European Union and Mercosur have reached a political agreement that should lead to a future trade deal.
Over a transition period of 10 years, customs tariffs are due to be progressively faded out for 93% of the tariff lines (products) applicable to EU food exports. These lines account for 95% of the value of the agricultural products exported by the EU. The EU will liberalize 82% of the imports of agricultural products, with partial liberalization commitments for remaining imports, notably tariff quotas for the most sensitive products. A very small number of products are completely excluded from the agreement. 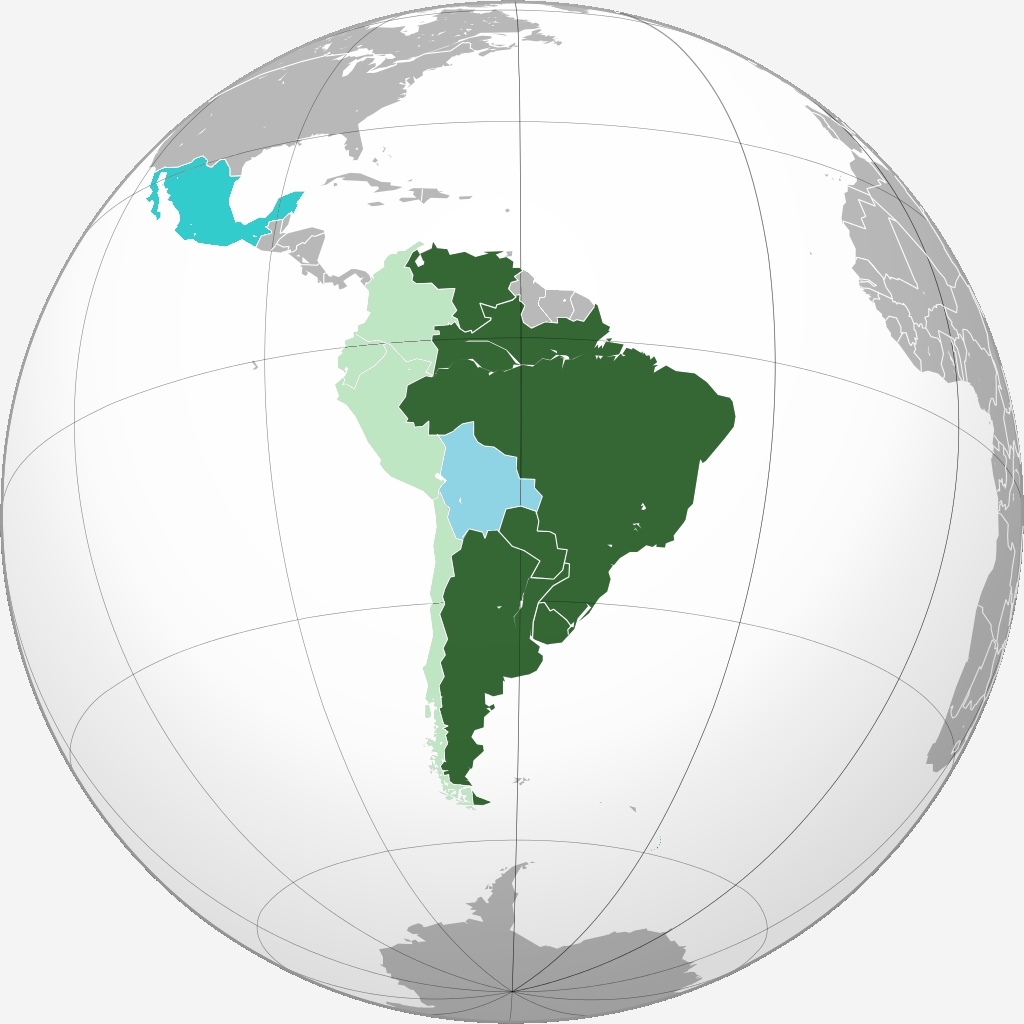 • Mercosur members (dark green): Argentina, Brazil, Paraguay, Uruguay and Venezuela (suspended since 2016);
• Associate members of Mercosur (light green): Chile, Colombia, Peru and Ecuador;
• Candidates for accession and observers: Bolivia, Mexico
According to the document that summarizes the negotiating results of the trade part of the EU-Mercosur Association Agreement at the time of the agreement (in principle on 28 June 2019, see annex), “a series of other key products of EU export interest will be liberalized by Mercosur, among which wine, olive oil, soft drinks, some fresh fruit, canned peaches and canned tomatoes”. However, it would seem that all tomato-based products may also be exempted in the future, according to requests submitted by TomatoEurope (a European association of tomato processors) to the European Commission for several years.
Given the volumes of trade in tomato products between other major supply and consumption zones, it is clear that the quantities exchanged between South America and Europe are not particularly impressive. The past two or three years have seen a slight increase in the tonnage of pastes imported from Europe into Mercosur countries, with current volumes just exceeding 8 000 metric tonnes after touching 9 800 mT in 2018. But the trade flow of the previous seventeen years did not exceed the modest average of 5 000 mT per year.
For that period of time as a whole, and over the past three years, the Italian industry virtually monopolized export flows, controlling more than 86% of the exchanges, with annual average exports of more than 7 350 mT and an increase in 2018 with results of more than 9 000 mT. This volume was complemented by Spain and, to a lesser extent, by Portugal, with annual averages for the 2016-2018 of respectively 310 mT and 190 mT.
Although Brazil has one of the biggest processing industries in the world, it has continued to be a major market outlet, with imports accounting for almost 59% of the volumes of European pastes shipped to Mercosur over the past eighteen years (almost 5 800 mT last year). Another major processing country, Chile, which is an associate Mercosur member mostly focused on exporting its production to foreign markets, has nonetheless shipped in tomato pastes from Europe to the tune of 600 mT on average over the past three years. The tonnage bought by Venezuela, Uruguay and Paraguay has not been exceeding a few hundred tonnes.

In the other direction, EU imports of pastes from South American countries exclusively involve products exported by the Chilean industry. Indeed, Chile already concluded its free trade agreement with the EU that establishes a 0% mutual tariff on tomato products. Not only the quantities have not exceeded 3 500 mT/year on average over the past twenty-two years, but they also almost dwindled to nothing during an eleven year period between 2003 and 2013. However, being extremely irregular in terms of volume, paste exports from Mercosur (in the broad sense) into the EU have recorded a notable increase over the past five years, and actually reached an exceptional peak of more than 18 000 mT in 2015, the result of a spectacular and one-off increase in Chilean foreign sales to Germany, Italy, the Netherlands and Poland. Average volumes over the past three years have amounted to approximately 6 900 mT of finished product.

In the final count, and excepting the exceptional result of 2015, the tomato paste trade flow between Mercosur countries and the EU has been limited to the relatively modest volume of a few thousand tonnes, with a trade balance that tips slightly in favor of the European industry. If endorsed, the deal will be applicable only to the full Mercosur members, Brazil, Argentina, Paraguay and Uruguay. When the final agreement has been ratified, the commercial context will likely not be fundamentally different, as the programmed suppression of customs tariffs is a secondary factor compared to the primary importance of the size of demand on both sides of the Atlantic, as well as issues like the cost of maritime transport, EUR/USD exchange rates, and the cost of production, both in the EU and in Mercosur countries, etc.
Some complementary data
Paste trade between Mercosur countries and the EU (the graph takes account of trade statistics for all Mercosur countries – members, associate members and accession candidates). The trade balance tips slightly in favor of Europe, averaging just over 1 100 mT of finished products over the past three years. This result is the same as the average surplus for the period 2001-2018. 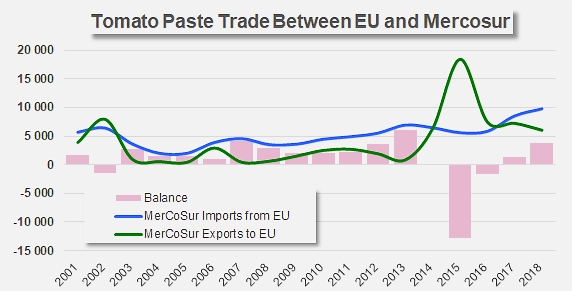