21/11/2022 - François-Xavier Branthôme
Here is a digest of the other news of the last few months concerning front-of-pack labeling and the debate on the choice between the NutriScore system and competing models.
(August 2022)
Italian Government launches Nutrlnform Battery app as preferred diet tool
Italy, which is publicly opposed to Nutri-Score, has developed a smartphone app to accompany its alternative nutritional labelling scheme NutrInform Battery.
In just a matter of months, the European Commission is expected to announce which EU-wide harmonized nutritional labelling scheme it plans to roll out across the bloc. Nutri-Score is a favored contender. Developed in France, the scheme classifies food and beverages according to their nutritional profile by using a colour-coded system with a scale ranging from A (healthier choices) to E (less healthy choices).
At least seven Member States have adopted Nutri-Score as their national voluntary labelling scheme, alongside F&B heavyweights Nestle, Danone, and Kellogg, among others.
Yet not all across the bloc agree Nutri-Score should be enforced EU-wide. Italy, for one, has long accused the scheme of discriminating against many of the single-ingredient delicacies for which it is famous, such as olive oil, Parma ham and Parmigiano cheese.
In 2020, Italy officially adopted its home-grown challenger scheme, the Nutrlnform Battery, which unlike Nutri-Score, takes 'daily intake' into account. And now, two years later, a smartphone app has been developed to accompany the scheme. Its makers say it helps consumers to eat in a “varied and balanced way”, with a “correct” intake of all food groups, each in the “right” quantifies. 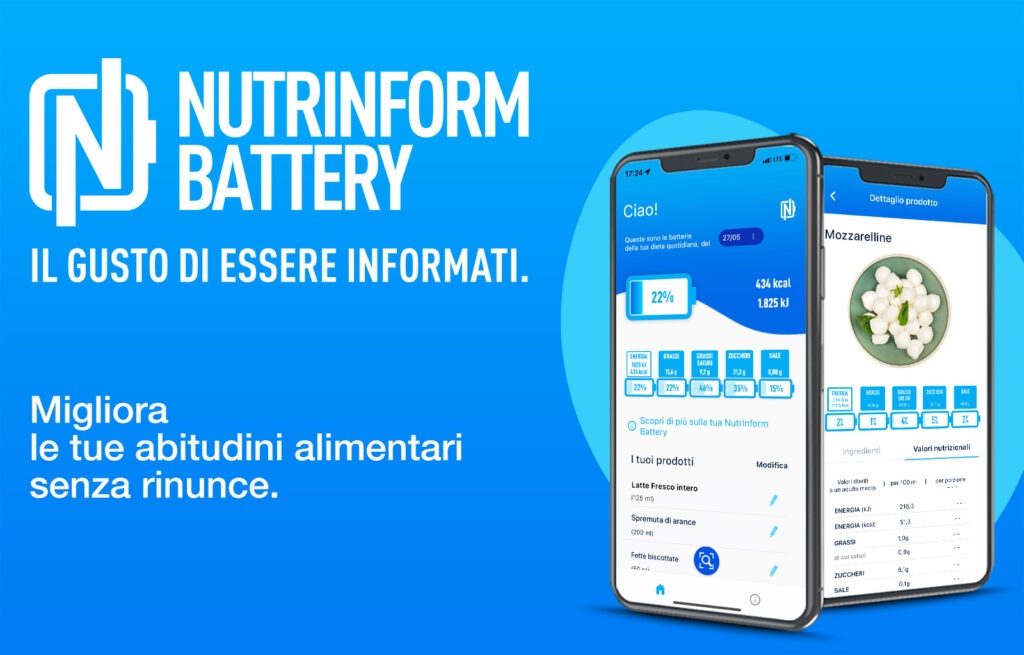 Five batteries and portion control
The Nutrlnform Battery scheme is similar to the UK's traffic light concept in that it uses columns or batteries to display the percentage of energy, fats, saturated fats, sugars and salt contained in the portion of product in relation to reference daily intake.
The Nutrlnform app - which is the result of collaboration between Italy’s Ministries of Health; Economie Development; and Agricultural, Food and Forestry Policies; alongside the Italian National Institute of Health (ISS) and the National Research Council of Italy (CNR), among others - is adapted to the standard nutritional requirement of 2,000 kcal per day.
To help consumers follow the “principles of the Mediterranean Diet”, the app offers two tools:

The first is the Nutrlnform Battery label, which is designed to provide the nutritional information of each food in a clear and transparent way. It also indicates the portion size, as suggested by nutritionists.
"Just photograph the EAN code on the back of each packaged food [item] to have all its nutritional information (calories, salt, sugars and fats) on the screen of your smartphone," explain its developers.
It is possible to change the quantity of suggested portions if the user consumes a greater or lesser amount than indicated,
Tracking nutrients throughout the day

The second tool has been coined the 'Daily Diet Battery'. This offers consumers a way of tracking their intake throughout the day.
"Each time you consume a food, the data is collected in the app and accumulated to update the Batteries of your Daily Diet”, explain the developers.
"When the Daily Diet Battery for a nutrient is dose to filling, you will know that for the rest of the day you will have to avoid further consumption of that nutrient and move towards different types of foods. Provided of course that the energy battery is not completely full”.
The suggested values for calories, salt, sugars and fats not to be exceeded are suggested by the European Food Security Agency (EFSA).
The National Guidelines for Healthy and Correct Nutrition, on which the Nutrlnform Battery is founded, is based on the Daily Reference Values of Nutrients and Energy for the Italian population (LARN) developed by the Italian Society of Human Nutrition (SINU).
To make “life easier" for shoppers, the app also allows consumers to look beyond packaged products. The nutritional data of more than 200 recipes of dishes usually consumed in Italy - such as popular pasta dishes-are included.
This means that consumers needn't enter the nutritional data of recipes ingredient by ingredient.
Nutrlnform criticism
Just as Nutrlnform Battery’s creators criticize Nutri-Score, so too has the Nutrlnform Battery scheme been criticized.
The Nutritional Epidemiology Research Team (EREN), made up of researchers from Inserm, Inrae, Cnam, and the Université Sorbonne Paris Nord, argue that Nutrlnform Battery was developed with “internal political and economic issues” in mind, 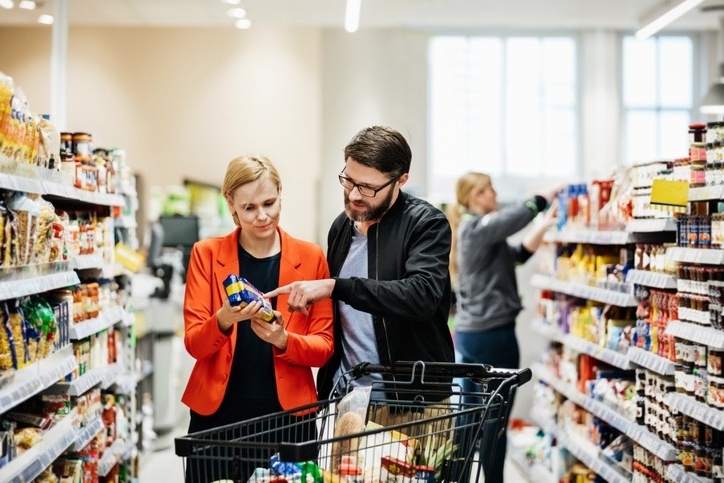 A “major flaw” of the Nutrlnform Battery scheme is its reference to portion, rather than standard reference of 100g of food (or 100ml for liquids), according to the EREN researchers.
“The latter is a recommendation of the WHO and public health structures because it allows for an objective comparison of food products on the same basis and avoids the use of portion sizes that are not standardized and often defined by the manufacturer themselves,” they stress.
"For example, for cheese pizzas, the recommended portion sizes vary from brand to brand, some offering a 100g portion, others 123g, others 150g, others 175g. It is therefore impossible to make the calculation based on portion sizes."
Calorie intake, however, is calculated per 100g of food.
The researchers also take issue with the battery icon itself, describing the direction of its “charge” as “counter-intuitive”.
“Curiously”, the charging appears to be moving in the opposite direction, they suggested: “the more the battery is 'discharged', the better the nutritional quality of the food”.
(August 2022)
Nutri-Score 2.0? Algorithm update recommended by European scientific committee
The app, which offers new functions for Nutrlnform Battery users, launches as its competitor scheme Nutri-Score prepares to undergo some changes.
Recommendations suggested and accepted by the seven Member States backing its implementation are designed to better align the nutrition label with dietary guidelines.
While judged to be “performing well”, the Scientific Committee of the Nutri-Score has suggested improvements to further align the FOP nutrition label with dietary guidelines.
Last year, seven European countries joined forces to step up use of front-of-pack nutrition label Nutri-Score. As part of this initiative, the group of Member States – made up of Belgium, France, Germany, Luxembourg, the Netherlands, Spain and Switzerland - established the Scientific Committee of the Nutri-Score (ScC).
The trans-national governance was tasked with updating the front-of-pack (FOP) nutrition label's algorithm. And now, the ScC’s recommendations are in.
Dietary guidelines inform updates
Nutri-Score ranks food from (-15) for the “healthiest” products to (+40) for those that are “less healthy”. Based on this score, the product receives a letter with a corresponding code: from dark green (A) to dark red (F).
The Commission has plans to propose a harmonized, mandatory FOP nutrition labelling scheme by the end of this year, with the aim of enabling consumers to make health-conscious food choices. Nutri-Score has not been ruled out of contention.
The ScC had already made public that overall, it deems the Nutri-Score algorithm to work “well”. Yet its most recent report - voted on and accepted unanimously 29 June - suggests improvement can be made.
These are intended to improve the capacity of Nutri-Score to classify the nutritional quality of products in certain food groups in line with nutritional recommendations adopted in European countries.
Serge Hercberg, professor of nutrition at the Université of Sorbonne Paris Nord's Faculty of Medicine, and whose work formed the basis of Santé Publique France’s Nutri-Score, welcomed the recommendations.
“The European scientific committee, composed of independent experts, has done excellent work based on science and public health. The changes proposed rely on rigorous scientific analyses and tests carried out on various national databases”, he commented.
"All these recommendations are very useful and important, enabling the improvement of the performance, and strengthening the effectiveness, of Nutri-Score."
How should the algorithm be changed?
While the recommended modifications vary, they are all intended to better align the nutrition label with dietary recommendations.
In the main algorithm, for example, suggested changes seek to improve differentiation between foods based on salt or sugar content. The ScC has also put forward a modification to improve differentiation between whole grain food rich in fibre and refined foods.
In the “fruit, vegetables, legumes” component, the committee voted on removing nuts and oils from the ingredients. Instead, nuts and seeds would be included in the “fats, oils, nuts and seeds” component.
Within this same component, a better classification for oils with lower contents in saturated fat (e.g. olive, walnut, rapeseed), should be established, noted the ScC.
Improved differentiation between sweetened and unsweetened dairy products and between different types of cheese has also been recommended. As too has better classification for fatty fish, to help consumers identify these foods as “healthy”.
The Nutri-Score algorithm will be changed according to these recommendations in the “near future”, explained Hercberg.
“The Steering Committee of Nutri-Score stated… that the date of entry into force of the new algorithm will give operators sufficient time to implement the new label.”
In the meantime, the ScC is working on proposed Nutri-Score algorithm changes for beverage products. Findings are expected before the end of the year.
Sources: foodnavigator.com
Related articles

Labelling: The Commission is moving towards mandatory front-of-pack nutrition labels

Italy: taking a stand against the Nutri-Score trend?