23/11/2022 - Press release , François-Xavier Branthôme
"As an association, we are committed to maximum transparency"
An article in the Italian press about imports of Chinese tomato products recently mentioned "an avalanche of 290,000 mT of tomato paste from the Xinjiang region in the first months of 2022." Anicav is keen to respond by highlighting some obvious considerations in order to clarify several important points for the national industry.

We quote the official press release below. 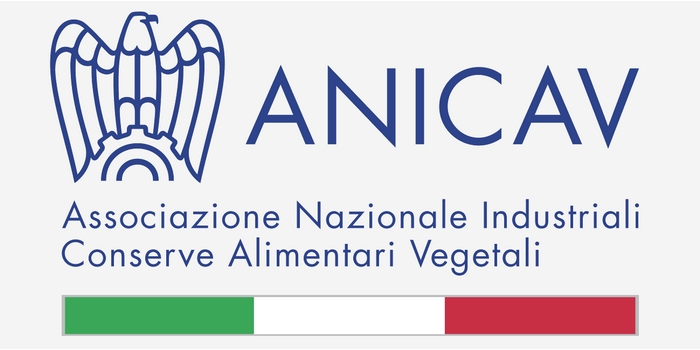 "As ANICAV – the member association of Confindustria that represents Italian private tomato processing companies – it seems legitimate to offer important clarifications about some statements that we consider misleading and damaging to the reputation of a sector that represents one of Italy's prime food-industry achievements in the world, both in terms of turnover and quantities produced, and that plays an important strategic role and driving force for the national economy.

We apologize for dwelling on this topic, but there are some issues that need to be carefully considered in order to fully understand the dynamics involved. The article opens with this statement: "It may be difficult to believe, but every year an avalanche of Chinese tomatoes arrives in Italy... This region (Xinjiang) exported more than 290,000 tonnes of tomato paste in the first months of 2022, and nearly 20% of the product was absorbed by our own country..."
The first point of objection concerns the "avalanche" of products arriving in Italy. In the first half of 2022, according to data from Istat (Istituto nazionale di statistica), imports of pastes from China fell by about 38%. In terms of volume, we are talking about 38,000 tonnes, well below the quantity indicated in the article.

But beyond the question of "numbers and figures", which are in any case negligible compared to the quantities of tomatoes processed in Italy (5.5 million tonnes of product this year and 6 million in 2021), it is important to clarify a delicate issue.
Italy imports tomato paste from various markets such as China, the United States, Spain and Portugal. Imported volumes from the two largest producing countries (China and the United States/California) vary according to exchange rate fluctuations and to the internal situation of production/overproduction. As a result, with China increasing its production this year, it is easy to foresee an increase in imports from that country.

It should be noted that approximately 90% of the tomato paste imported from outside the EU, and thus from China in particular, are brought in under the inward processing regime or as temporary imports (by identity and not by equivalence: Chinese paste (incoming) for Chinese paste (outgoing), Californian paste for Californian paste, etc. ) The paste temporarily enters the national territory for improvement purposes (remanufacturing, processing or remediation) and is then re-exported to countries outside the EU, mainly to North and West Africa and to the Middle East where the consumption of this product is widespread. The entire route taken by the product is documented and subject to controls by the Guardia di Finanza, by customs services and by health authorities. The imported and reprocessed paste is then exported with the indication on the label "packaged in Italy" and not "produced in Italy", even in the presence of substantial processing that would allow this indication. 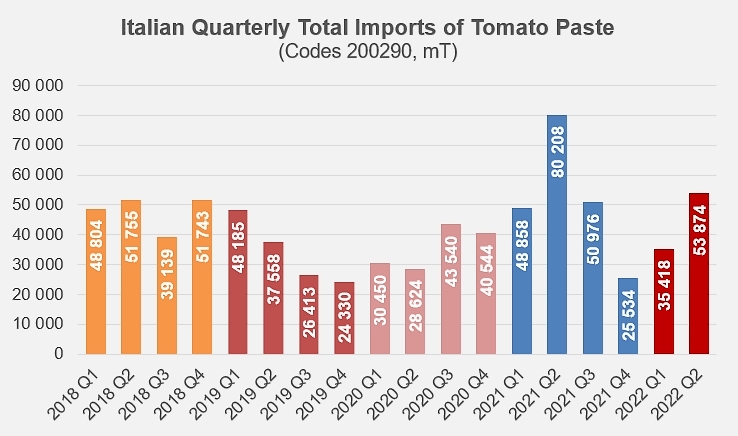 Source for Tomato News: Trade Data Monitor (national customs services)
Thanks to the excellent quality of tomatoes that are grown in Italy, this country’s crop is used for "higher value processing" (whole peeled tomatoes, puree, cherry tomatoes...) that the canning industry is trying, with great difficulty, to distribute in a way that is profitable enough to cover the cost of the raw materials, which remains the highest in the world. The Italian consumption of tomato paste represents slightly more than 1% of the tomato products market. Therefore, the production and reprocessing of this product is mainly aimed at foreign markets. Imports of pastes are not a particularly significant problem for our agricultural and industrial sector because real competition is found at different levels.

Firstly, we export far more products than we produce. Moreover, the reduction of imports would not lead to an increase in the number of hectares cultivated, as one might imagine, since we would not be able to produce all the fresh tomatoes needed for the production of paste, and we prefer to allocate the available hectares to higher quality productions, such as peeled tomatoes, a characteristic and valuable product of our companies. In terms of costs, we are not competitive: producing paste from fresh Italian tomatoes is very costly, so the finished product would have to be sold at a price that most target markets could not bear.
Finally, if the paste were not remanufactured, there would be no advantage for the Italian industry, since our main competitors at the European level (Spain and Portugal) have lower costs, both for raw materials and transport. So the only consequence would be the exclusion of Italian companies from the markets, to the benefit of competing countries, first and foremost China itself, with the consequent loss of jobs (direct and induced) and economic resources that this production is able to provide for deseasonalized industrial operations.

Furthermore, it is absolutely necessary to recall a fundamental notion.
The peeled tomatoes, purees, pulps and cherry tomatoes that we find on the shelves of our supermarkets are made from 100% Italian raw materials of high quality and have nothing to do with imported, remanufactured or, as already mentioned, exported semi-finished products. It is totally misleading and confusing to consumers to state that "Chinese tomato arrives in Italy as paste in drums and is then reprocessed - and as if by magic, the origin of the raw material is shrouded in mystery. Thus, it is impossible for consumers to trace the exact origin of the products. The lack of transparency has become a problem, with many importing companies claiming that it is processed and destined for export, but the facts and various investigations have demonstrated that the reality is quite different."
It is absurd to refer to Chinese tomato products when talking about products that we find on our shelves in Italy, such as tomato pulp, peeled tomatoes, and cherry tomatoes. It is not possible to obtain solid products, such as peeled tomatoes, pulp or cherry tomatoes from tomato paste, which is liquid in nature, whether imported or produced in Italy: it would be like trying to obtain fifty or more bunches of grapes from one bottle of wine. Moreover, the packaging methods of these products require processing times (maximum 24/36 hours after harvest) that are incompatible with those that would be necessary to import the raw material from China. Additionally, these products do not contain any form of paste (whether Chinese, Californian or Italian) or even covering juice that is obtained from the fresh "tomato" raw material discarded at the time of sorting. It would obviously be highly uneconomical to reprocess triple-concentrated paste from China or any other country for use as a covering liquid.
Moreover, there is no "mystery" surrounding the origin of the raw materials used. The regulations are clear and strict, more than in any other country in the world. It should be noted that since 2006 in Italy it is compulsory to indicate the origin of the raw material on the label, and the designation "tomato puree" can be used only for products obtained from fresh tomatoes (not from diluted concentrate).

With regard to the current incidents to which the article refers and which involve companies of our sector in relation to alleged infractions, we need to remember, once again, that these are facts pertaining to individual responsibility that should not be considered as a stain on the industry as a whole. Furthermore, none of the cases under investigation involve the use of Chinese paste, which the press can easily verify.
In any case, in order to dispel doubts and defuse controversies and unnecessary alarmist reports, we have always been committed as an association to maximum transparency in order to protect consumer health. This is also attested by the positions we have taken over the years in favor of the introduction of mandatory origin labeling for all tomato products, and the work we are carrying out, in collaboration with the SSICA (Experimental Canned Food Agency) and under the coordination and guidance of the ICQRF (the Ministry of Agriculture's Central Inspection for the Protection of Quality and the Repression of Fraud in Agri-Food Products) for the characterization of macro- and micro-minerals present in tomatoes. These research efforts aim at enabling an identification of areas of origin of the processed products which, once implemented, will constitute a fundamental tool in the defense of our produce and in the protection of final consumers.
This is why we believe that it is of fundamental importance that subjects likely to have a real economic and media impact be approached in a responsible manner, without generalizations that tend to feed a culture of suspicion, which is irreversibly damaging for an entire sector and detrimental to consumer interests."

Some additional information
For the record, Chinese quartely exports of tomato products under customs codes 200290. 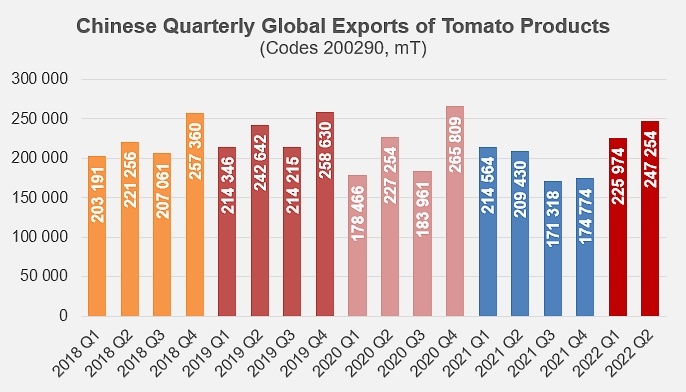