26/11/2021 - Ag Alert , François-Xavier Branthôme - 2021 Season - Lire en français
150 varieties and 430,000 loads delivered in California in 2021
Nineteen counties of varying sizes grow processing tomatoes in California. In 2021, nearly two-thirds of the quantities processed were produced in the four main counties (Fresno, Yolo, Kings and Merced), whose activity levels were at least equivalent to those of major processing countries at a global level (Turkey, Brazil, Chile, etc.). 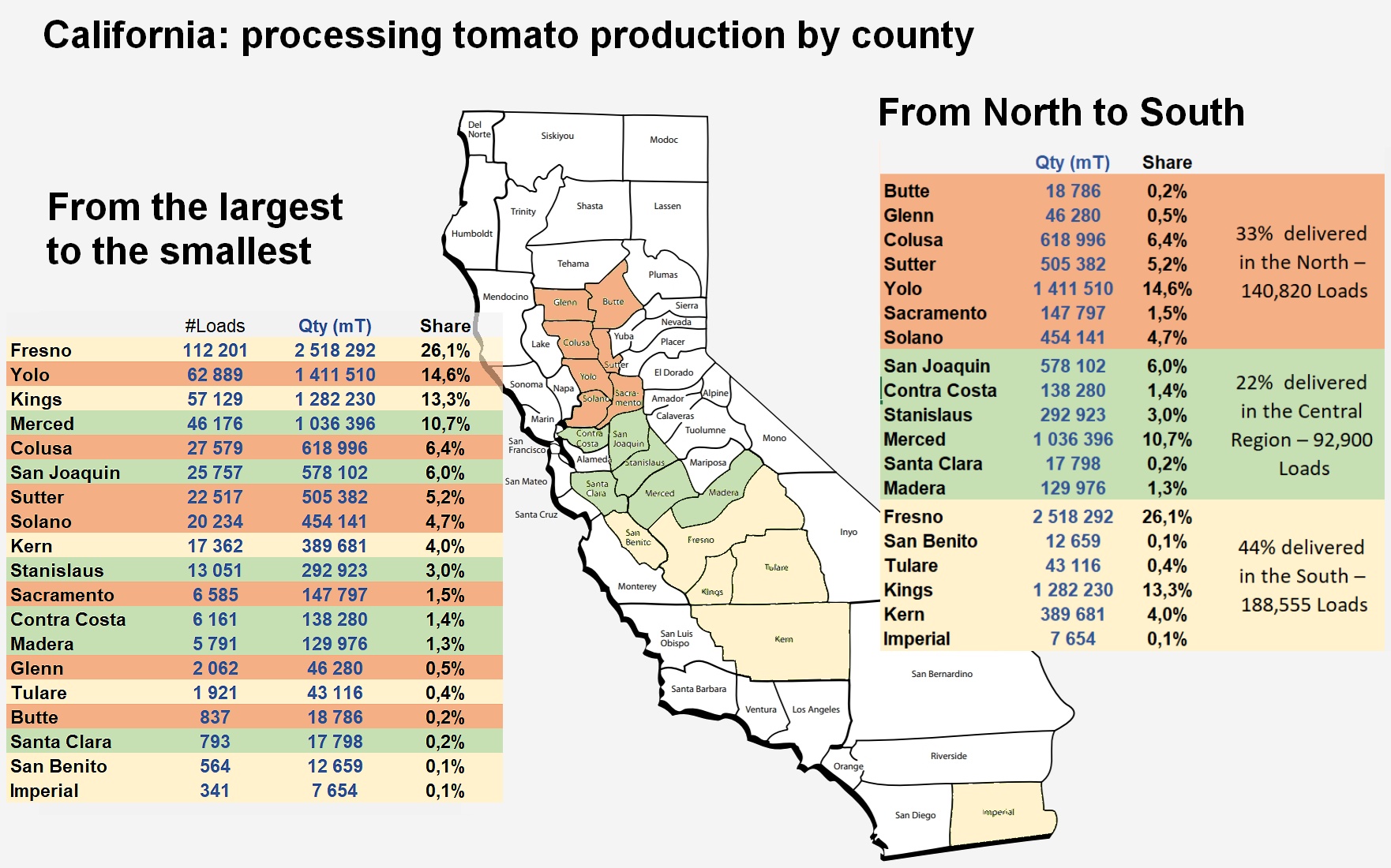 Thirteen major seed companies supplied approximately 150 varieties to California's processing tomato growers. In its final report, the PTAB indicates that the most widely grown varieties this year have been:

and HARRIS MORAN HM 58841 (16,795 loads delivered), in the counties of Yolo and Solano (see additional data in the various components of the PTAB 2021 report at the end of this article).
In total, with more than 73,200 loads delivered to processing plants (out of a total of nearly 430,000 deliveries in 2021), the three varieties favored by California's growers produced 17% of the total quantities processed. Demonstrating the great diversity of the offer, the ten most frequently planted varieties this year represented "only" 38% of the deliveries to factories. The characteristics of the different varieties (resistance, Brix, cycle duration, viscosity, etc.) are presented in the attached documents.

Over the last crop year, the two main seed suppliers (Seminis and Heinz, ranked by number of loads delivered to plants) accounted for almost half of the processing tomato crop in California. With the addition of Harris Moran, almost two-thirds of the processing tomato seed market are accounted for, and with Nunhems and Woodbridge (part of Syngenta since July/August 2020), that proportion reaches almost 90%.
The number of varieties offered ranged from 32 varieties for Seminis to 9 for United Genetics and 8 for Woodbridge and Orsetti (28 for Heinz, 20 for Harris Moran, 16 for Nunhems and 14 for BHN Seed). 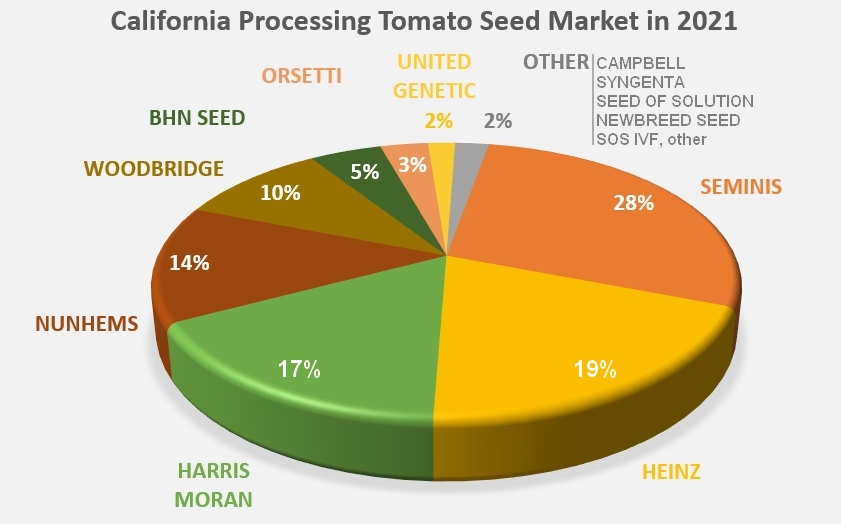 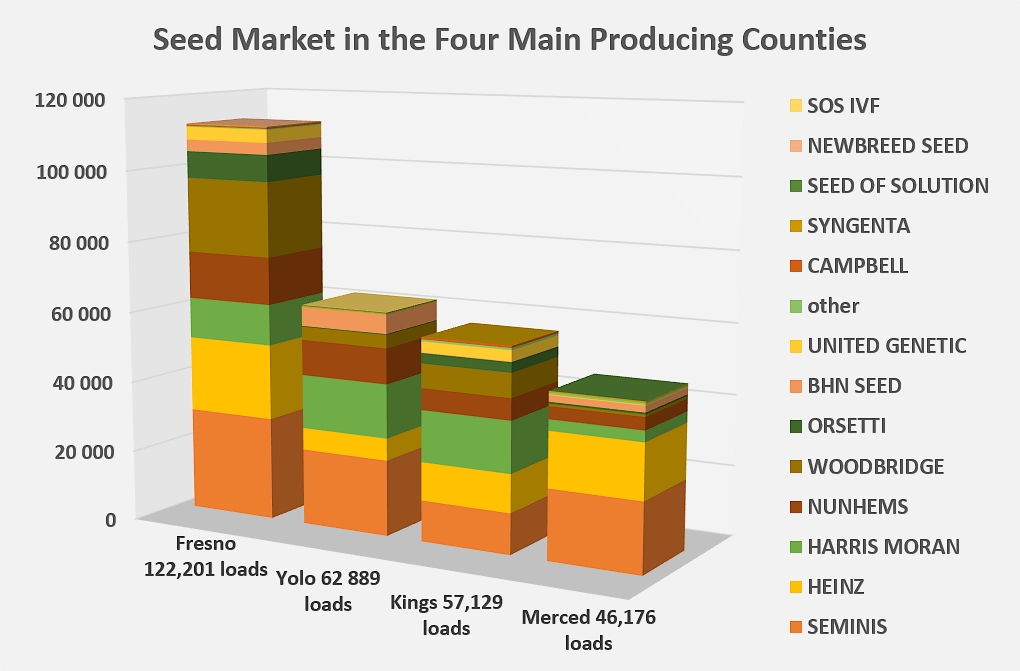 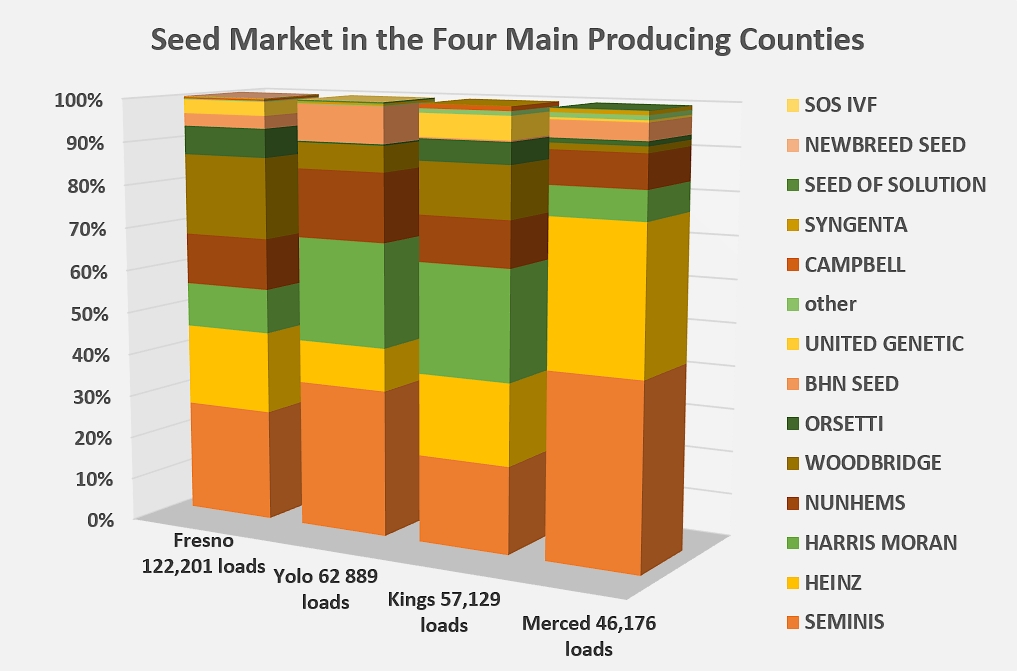