Weather and pandemics notwithstanding, the 2020 processing-tomato crop is running at about the same level as last year.
"Things are at contract, or maybe a tick below right now," said Lance Dami, who works in customer service and field operations for a tomato grower in Huron. As of the week of Aug. 15, slightly more than 4 million tons had been harvested, he said, citing figures from the Processing Tomato Advisory Board.

This year's production now is forecast at 11.4 million short tons (10.34 million metric tonnes), according to the U.S. Department of Agriculture, a 5% drop from the original estimate in May. In its updated estimate last week, USDA projected the processing-tomato harvest to come from 230,000 acres (93,077 hectares), with an average yield of 49.6 short tons per acre ( 111 mT/ha). 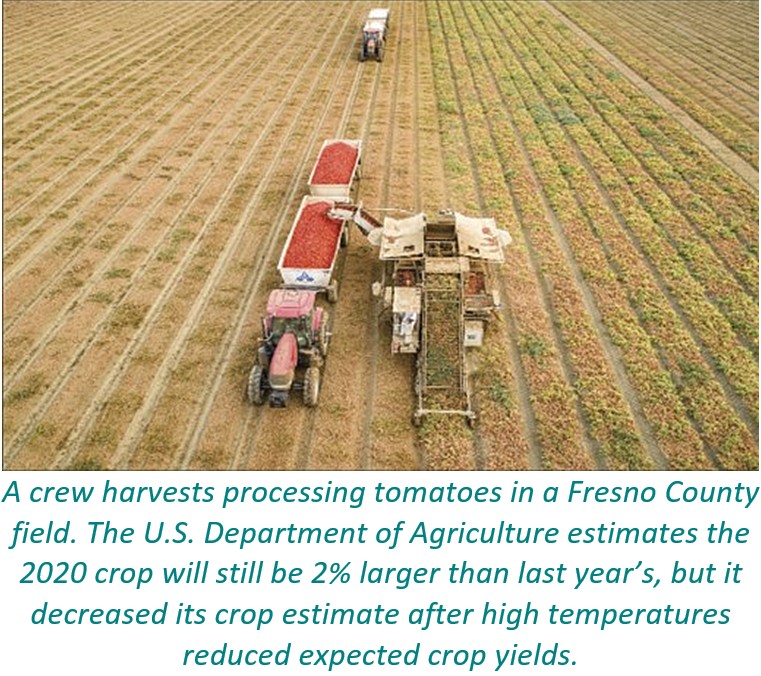 USDA foresees a 2020 crop whipsawed by untimely heat waves. Higher-than-average temperatures lowered early-crop yields, the report said, and tomato harvest was well along when a triple-digit heat wave in mid-August struck the Sacramento and San Joaquin valleys.
"There's no doubt the tomato crop will be affected from here on out," said Bruce Rominger, a farmer in Winters and chairman of the California Tomato Growers Association. "Usually, it's a week or two. Then you start seeing the effects of the heat in a more limited use, which is softer tomatoes. The later crops, the tomatoes that aren't nearly ripe now, probably won't size up as big because the plants just basically shut down and don't do anything during that huge heat."
On later plantings destined for October harvest, "a lot of those flowers will just abort," he said. "You won't get those fruit set when you have really extreme heat like we had." Rominger said based on past experience, he might see lower yields as a result.
"It's too early to see what exactly will happen, but I would expect that to happen," he said.

Dami said he's also been seeing bloom drop on the later tomatoes. "If I had to put a number to it, I'm estimating about a 5% drop in yields on the back end," Dami said, adding that he thinks about 15% of acres in the state are affected.

Reports of tomato spotted wilt virus (TSWV) also have been coming in from the San Joaquin Valley. "This season, tomato spotted wilt virus pressure is more widely distributed than in the recent past," said Thomas Turini, a University of California Cooperative Extension farm advisor in Fresno County. Turini said he has seen the disease at high levels from Fresno County south into Kings County. Most of the commercial varieties planted in the area have single-gene resistance, called Sw5.
"Primarily, the tomato spotted wilt virus detected in the tomato-production areas of Fresno and Kings counties is capable of breaking Sw5 resistance," he said. "However, disease levels have not consistently been damaging throughout the production area every season."
When infection occurs at early stages of plant development, Turini said, it can kill plants or severely reduce yields. "However," he said, "when infection occurs much later, it may just cause some shoot dieback and a few discolored fruit without economic consequences in processing tomatoes." Fresh-market tomatoes are more seriously affected, because they need to be cosmetically attractive, he added. 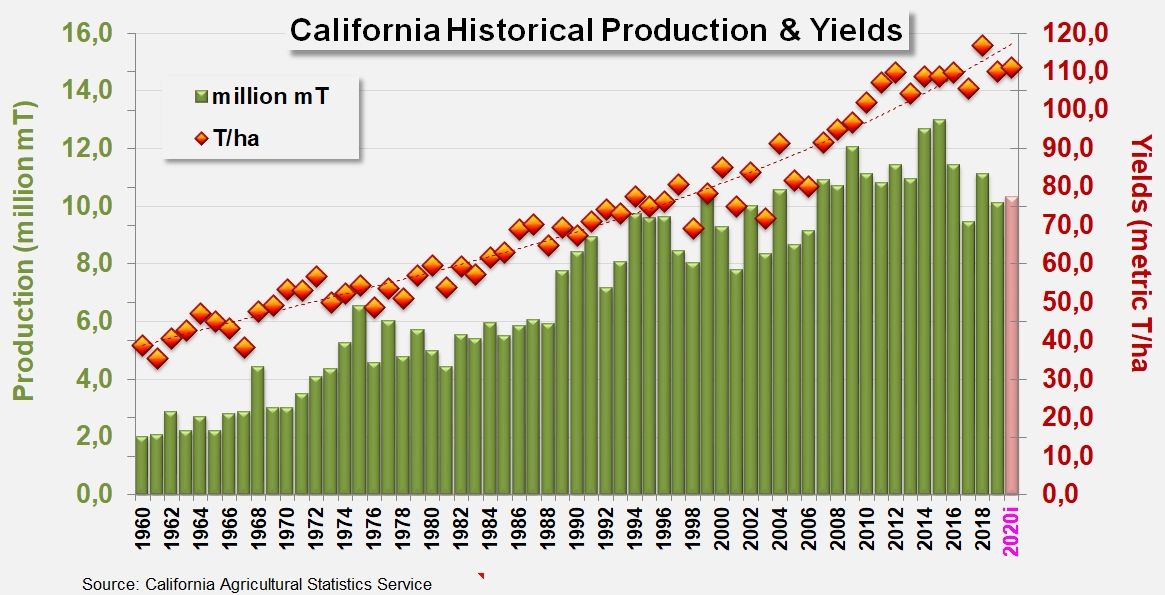 As to how the pandemic is affecting business, "it just depends what market you're in," Dami said. "I would say, in general, the food-service market's still down, but the retail market is still growing." That's because more people continue to cook at home, he noted.
"Your cheap-to-make food is your spaghetti and so forth," Dami said. "You're trying to feed your family and spread your dollar. You go look at stores, spaghetti sauce is hard to find. It's there, but these companies only have so much line time, because they gotta be as efficient as possible, too, in their factory."

One bump on the road to the cannery, he said, is a shortage of drivers to haul tomatoes from the fields. "Trucking has been an issue for the tomato industry this year," Dami said. "Canneries have not been able to run at capacity due to a shortage of trucking. They can't find enough drivers."
With other crops, such as almonds, also being harvested, the labor pool is strained, he added. The COVID-19 pandemic that prompted the first round of shelter-in-place orders in March has not led to any disruptions in the field, Dami said. "It hasn't stopped our harvest," he said. "We've all got great safety programs involved to manage that."
As for harvest crews, he added, "they're wearing their masks; they're keeping their distance."

Overall, Dami said 2020 will produce "a very good crop overall, even though you heard me talk about the spotted wilt and some yield loss here and there, but there is very good yield."