From the presentation (Tomato News Conference, 2019, Avignon) by Guillermo Quiroga, President of the Asociación Tomate 2000 and Ing. Agr. Ariel Lucero Reinoso, Secretary of Agriculture for the Government of San Juan

Currently, total surfaces planted with tomatoes for processing in Argentina cover 5 500 hectares, for a crop that last year reached approximately 400 000 metric tonnes (mT). 172 growers operate in this sector, each farming an average of 32 hectares and producing a crop that is processed by 24 industrial operators, with the three biggest of these accounting for 30% of the national market. Average operating costs amount to approximately USD 5 700 per hectare, and growers receive approximately USD 75 per tonne for the raw materials they produce, with a further USD 7.5 /mT being spent on transport to the processing plants.
Most of the relationships between growers and processing companies are governed by contracts, which are signed before planting and account for 80% of the volumes processed in Argentina. The country's main production is tomato purée at various concentrations. But the Argentinian market remains very dependent on imports, with an average gap between national production and demand of about 170 000 mT of raw tomato over the past ten years, though that amount has increased to about 230 000 mT of raw tomato over the past three years (2017, 2018 and 2019). The Argentinian tomato processing industry has been attempting to close that gap. The consumption of tomato products in Argentina has mainly been focused on concentrated purées (72%), with other notable products being peeled or chopped tomatoes (17%) and sauces (11%). 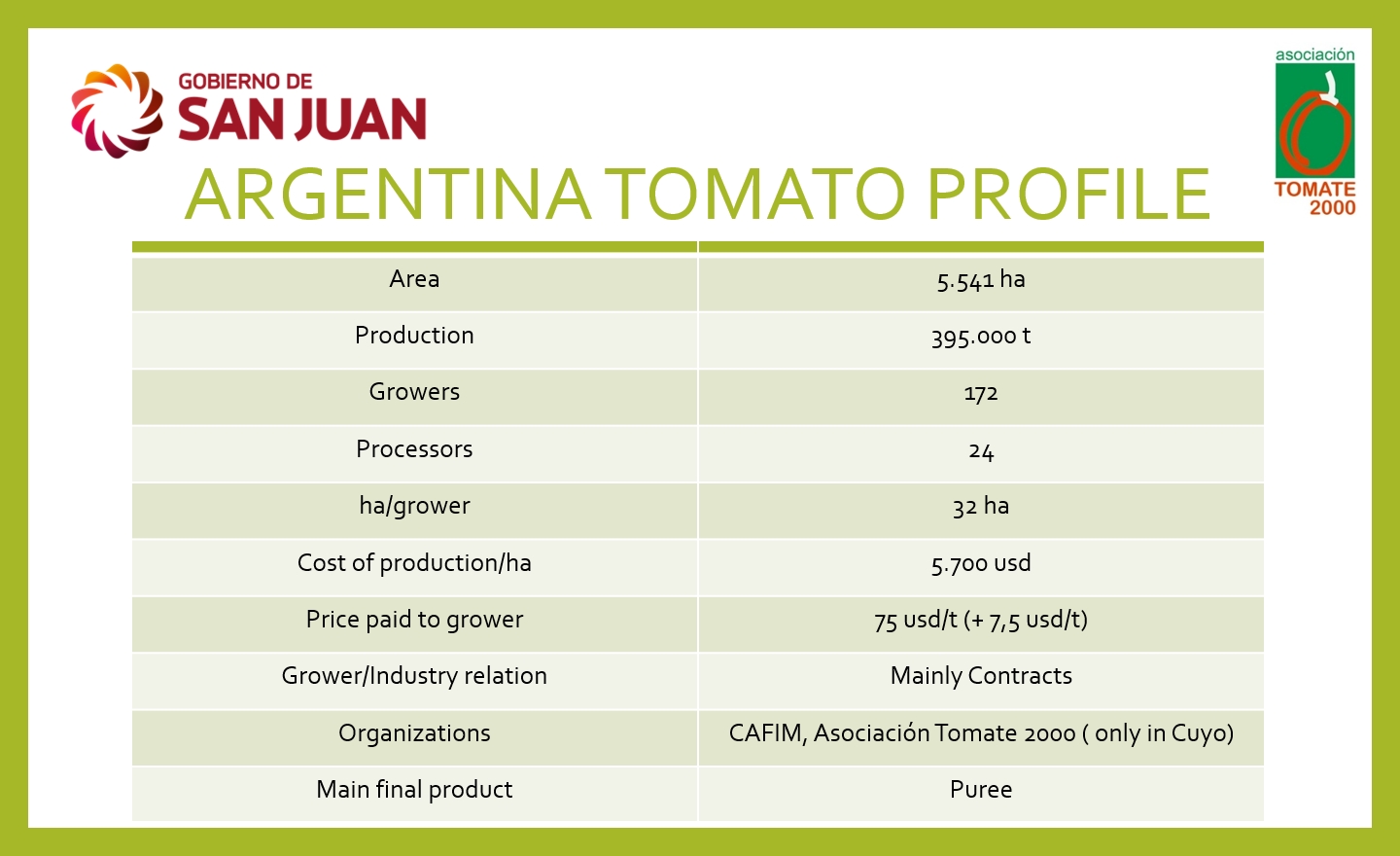 Argentina exports small quantities of its products, notably whole peeled tomatoes, in order to add value to its production. The quantities of peeled tomatoes exported in 2018 amounted to slightly more than 1 600 mT of finished products (against 8 000 to 12 000 mT for the period running 2009-2012). Foreign sales also included slightly more than 4 600 mT of pastes and 5 400 mT of sauces. Argentinian processors are aiming at a recovery of peeled tomato exports in the future. For now, imports remain an important feature of the Argentinian market, due to the extent of unsatisfied demand.
The main import product is paste, mostly from neighboring Chile; in 2018, supplies for the Argentinian markets included more than 26 000 mT of pastes, 8 700 mT of peeled tomatoes and 3 300 mT of sauces.

Argentina's production has increased in recent years. Overall, since 2009, due to a shift in cultivation areas, the surfaces dedicated to processing tomatoes have dropped considerably (from 8 440 ha to 5 540 ha), but this evolution has been paralleled by a fairly noticeable increase in agricultural yields, which have grown from 53 mT/ha in 2009 to 71 mT/ha in 2019.
Of the 23 provinces of the country, three main regions are involved in tomato growing: Cuyo, where San Juan, Mendoza and la Rioja are located, accounts for approximately 84% of the nation's production, northwestern Argentina accounts for about 9% of total production and the Rio Negro region to the south accounts for about 7% of the total, though this percentage has tended to drop. 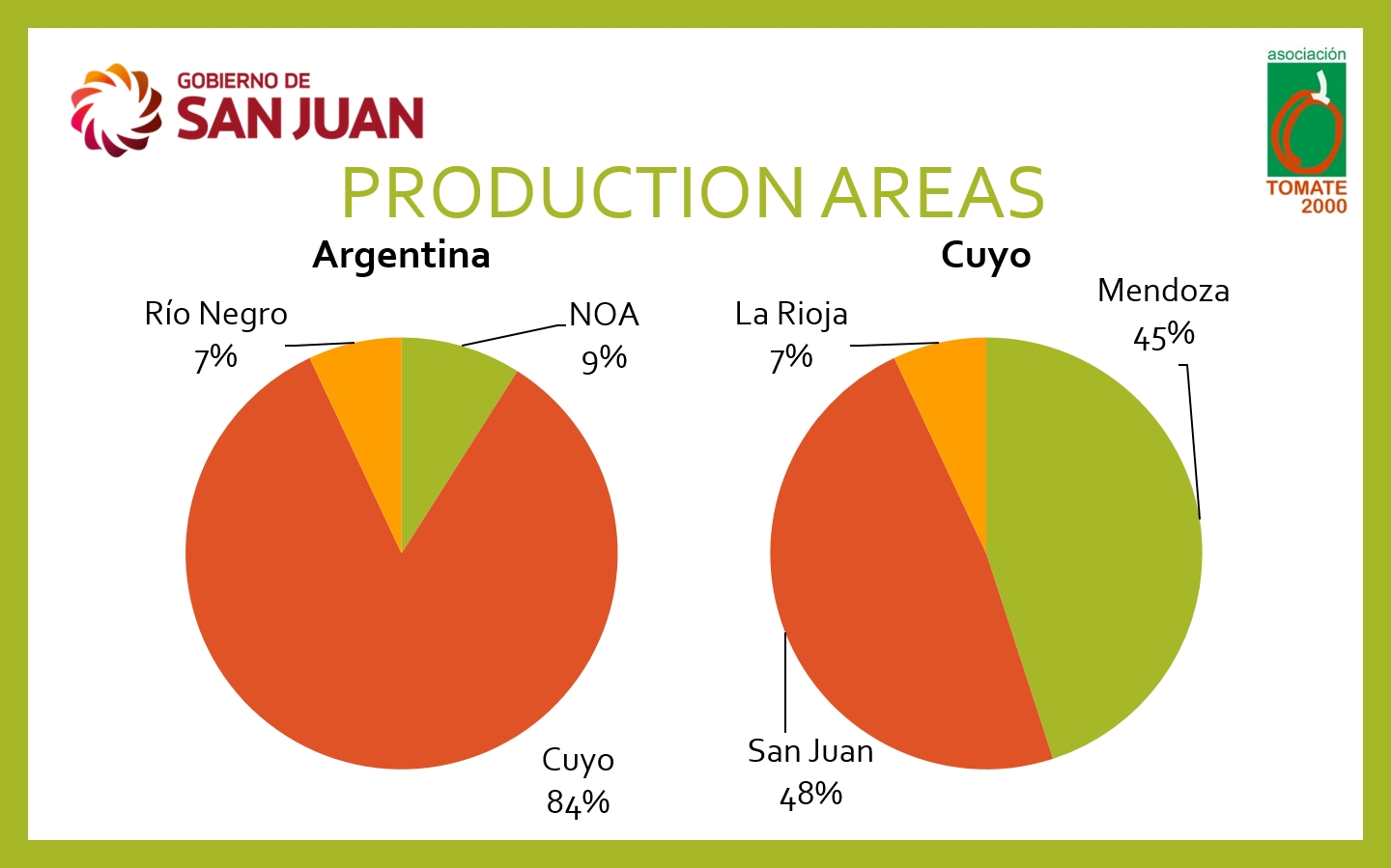 The San Juan region is important insofar as it plays a key role in the future sustainability of the Argentinian processing sector. Cuyo is the main area for processing tomato production, and San Juan now accounts for 48% of this region's crop (see appendices at the end of the article), whereas the Mendoza region has dropped to about 45% of the harvest produced in this zone. The situation has indeed changed a lot in recent years, as the Mendoza region accounted for about 79% of the planted surfaces in 2009, and the San Juan region only accounted for about 21% of the surfaces ten years ago.
In the San Juan area, planted surfaces and production have almost doubled, along with a significant increase in yields, which have always been the highest yields of the region, climbing from 70 mT/ha in 2009 to 96 mT/ha in 2015, then to 105 mT/ha and 106 mT/ha in 2016 and 2017, before returning to lesser values (83 mT/ha and 80 mT/ha) during the past two seasons, due to disastrous weather conditions (hail, excessive rainfall).

One of the main reasons that drove the shift in cultivation areas and allowed San Juan to attain this level of performance was the institution of complete mechanization for all of the processing tomato production cycle. The first stage consisted in a generalization of drip-irrigation systems: this technology is now installed on 98% of the planted surfaces of the San Juan region, whereas it was virtually unknown there in 2009. Mechanical transplanting has also been a decisive stage, and it is now used for 60% of the surfaces, while machine harvesting is carried out on 80% of the surfaces.
Speaking recently in the context of the 6th Encuentro Argentino del Tomate, Ariel Lucero Reinoso explained that the improvement of yields for San Juan this year has resulted in a record crop of 177 000 tonnes, which is 9% more than last year (162 000 mT).
However, in addition to the current challenge of needing to rotate crops due to soil fatigue, the main limiting factor for extending planted surfaces remains the sector's installed processing capacity. La Campagnola (ex-Arcor) processed approximately 85 000 tonnes this year and Almar processed a further 8 000, while smaller companies processed approximately 2 000 tonnes. The remainder of the quantities harvested in the San Juan region (slightly more than 80 000 mT) had to be shipped to Mendoza. This is why the Secretary of State for Agriculture has confirmed his intention to convince other companies to come and set up in the province. "The provincial government has endeavored to provide conditions that encourage investors to come and set up here." 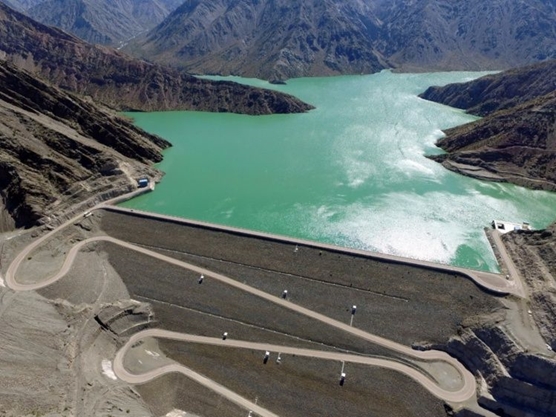 All of this progress has contributed to the development and success of processing tomato cultivation in the San Juan region, and it is a sector that can count on a promising future. The region's economy has been built on major mining operations, but the San Juan government is currently trying to diversify the main economic activities. In particular, the authorities are focusing on the management of water resources and on preventing the possibility of future shortages by promoting the construction of barrages and the installation of drip-irrigation systems (total coverage rate of the region is now at 20%).
Thanks to a contractual framework, the regional government is also making available some of the land that it owns to growers who want to cultivate processing tomatoes, and it is encouraging processors to set up industrial plants in the area.
In terms of the agro-ecological context, it is important to point out that production can be completely integrated and mechanized, as the region enjoys a harvest period that stretches over approximately five months from end of December to beginning of May. "Good agricultural practices" have become a generalized approach, and the industry is increasingly sensitive to issues of sustainability.
In order to promote the cohesion of the processing tomato industry, the government is involved in the Tomate 2000 association and supports private operators in general in their efforts to meet national demand.

Thanks to a degree of autonomy, the regional government is also attempting to improve the structural conditions of the sector in order to give growers and processors better investment prospects. Among the advantages of the region, it can boast a fiscal surplus that stretches over the past ten years, it ranks 5th on the list of Argentina's 23 regions in terms of foreign exports, it enjoys a very low rate of unemployment (3%, three times lower than the national average) and it has instituted incentive measures like special credit lines for drip-irrigation installations, agricultural machinery and industrial equipment.
For Ariel Lucero Reinoso, two of the main factors that are favorable to the development of production are the close proximity of cultivation areas to the industrial processing plants, which are most often less than 15 km away from each other, and the big growth potential to be found in the unmet national demand that Argentina must still largely satisfy thanks to imports. 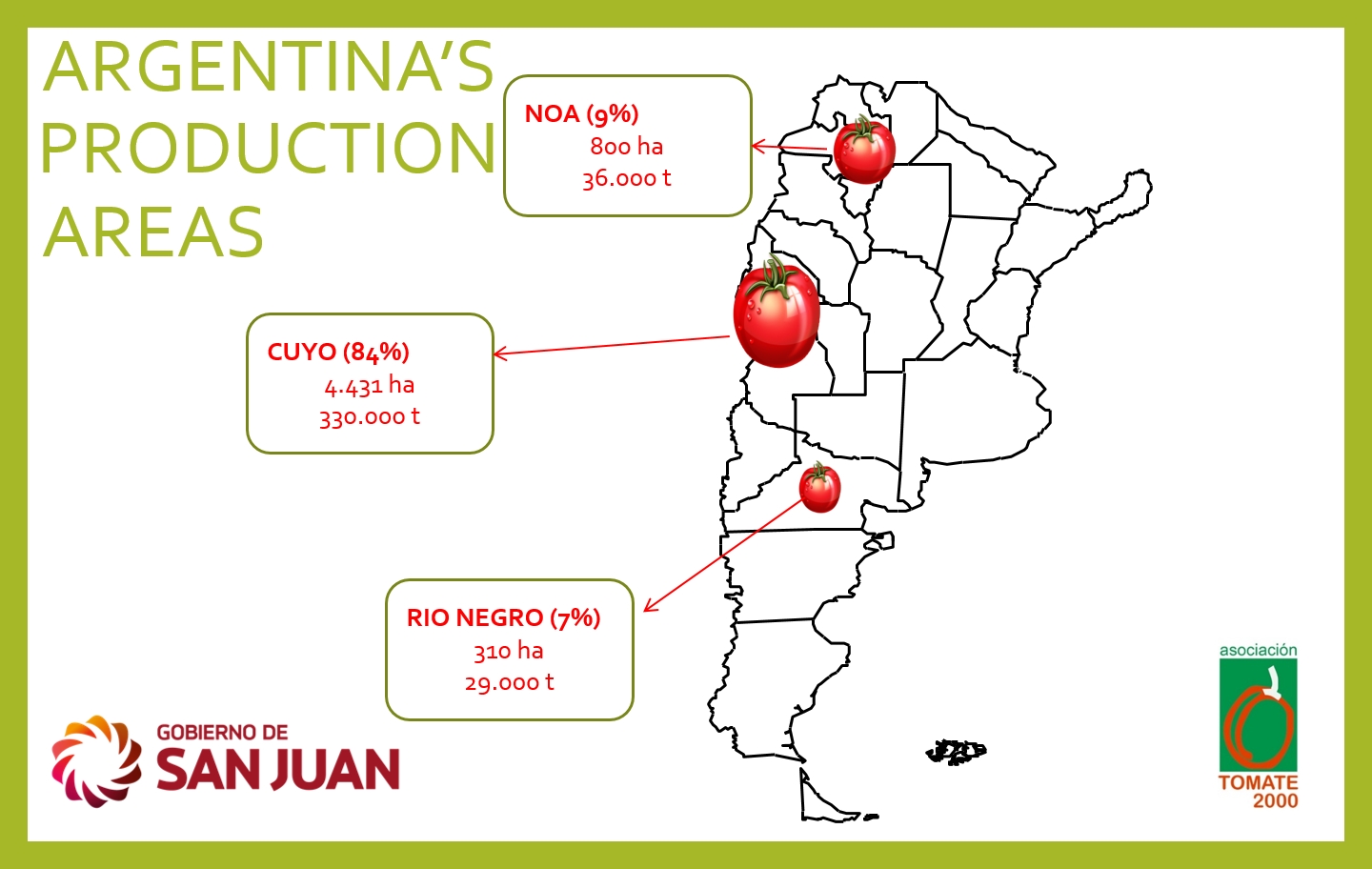 This article refers to the Tomato News Conference held in Avignon (Fr) on 16 and 17 May 2019, during which the “2019 Processed Tomato Yearbook” was distributed to attendees; this Yearbook can be purchased from this website (go to GET LISTED) or by sending the order form.

Argentina: The industry has asked for special protection measures