02/01/2019 - François-Xavier Branthôme - Lire en français
According to the Comtrade database of worldwide trade information, quoted by the Argentinian daily El Economista, Argentina ranked in 2016 in 16th place among countries that export canned tomatoes, in 39th place among paste and purée exporting countries and 38th among those that export ketchup and tomato sauces. In its article, the Economista indicated that the turnover for paste exports dropped by 8% the following year (2017), to slightly less than USD 4 million, reflecting a contraction in the volumes exported, which fell from 5 500 metric tonnes (mT) in 2016 to 5 100 mT in 2017. The paper also underlined that this represents a good performance in the difficult trade context for ketchup exports, with a turnover that grew by 26%, from USD 3.52 million in 2016 to USD 4.46 million in 2017, with a volume increase from 2 900 mT to 3 200 mT.

The statistics compiled by the INTA and the Tomate 200 Association show that consumption on the domestic markets amounts to approximately 16 kg of raw tomato per year and per person, for a countrywide total of about 700 000 mT. These same sources estimate that domestic consumption of tomato products has grown at an annual rate of about 2%, a demand that has been partly satisfied by imports of pastes from Chile, Italy and China, and by foreign purchases of sauces and ketchup from Chile, the USA and Brazil.

In Argentina, the current estimation of area to be planted for the next crop is 6 100 hectares for a production estimate of 475 000 tonnes

It is mostly in the province of Mendoza that the country's processing industry has been set up, with about 35 factories. But several processing plants have also been built in La Rioja, Santiago del Estero, San Juan and Catamarca. According to estimations put out by the Tomate 2000 association, the existing total processing capacity reportedly amounts to 717 000 metric tonnes, with the regions of San Juan and Mendoza hosting about 70% of that capacity (497 000 tonnes), while Rio Negro has close on 10% (approximately 70 000 tonnes). The capacity found in the provinces of La Rioja and the Santiago del Estero are recorded at significantly lower levels, each with 8% (60 000 tonnes), and finally Catamarca with 30 000 tonnes (4%).

On this basis, local professional sources estimate that projections for the production of processing tomatoes in Argentina show interesting growth prospects, in a context that presents no restrictions in terms of available surfaces suitable for growing processing tomatoes, and which offers sufficient resources of irrigation water to considerably expand this crop.
With this in mind, it should be noted that the Argentinian climate makes it possible to spread the harvest out over a very long period of time – from mid-November to mid-May – and the implementation of suitable technology could enable a major development in crop tonnage. Local operators estimate that meeting domestic demand, which is as yet not entirely covered by the country's production, would require planting a further 10 000 hectares over the next ten years in order to reach self-sufficiency, on the basis of domestic requirements estimated at 800 000 tonnes.

Local analysts do not discount the possibility of developing exports, with the Argentinian industry being well placed to offer an alternative to Italy for the supply of products in the canned tomato category, notably peeled tomatoes, and with expected growth on the Brazilian market, which has been progressing constantly in recent years.

Some complementary data
Argentinian exports of tomato products (in mT of finished products). 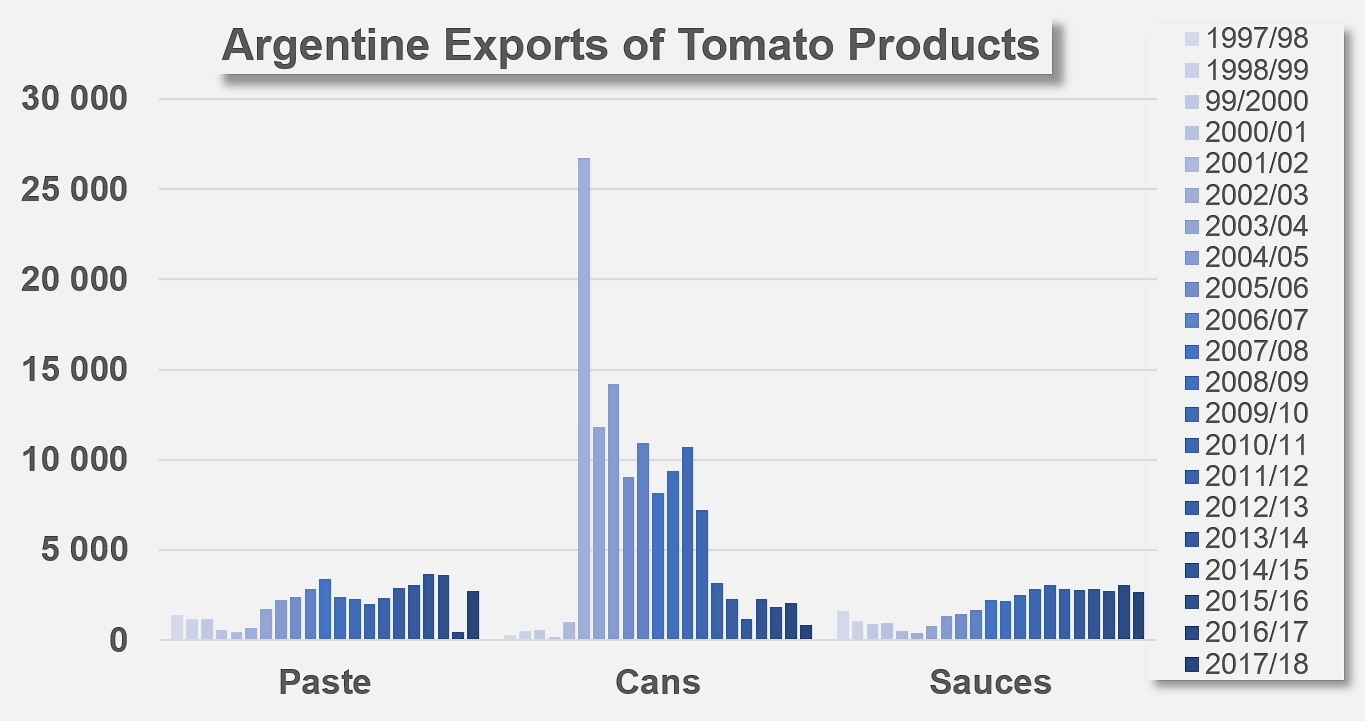