After several years of increasing production, the upcoming season in Argentina could see a remarkable increase in surfaces dedicated to growing processing tomatoes in the Mendoza region.
In the uncertain context caused by the decision of one major processing company to downscale its current production program for the season, other operators have expressed their intention to process the surplus raw materials caused by this decision, in addition to their own commitments, which could lead to an increase in the region's overall processing program.
Another consideration that is likely to help consolidate the processing industry in Argentina is that several contracts concluded between growers and processors have been negotiated in US dollars, which liberates the income and investment capacity of growers from the uncertainties of the chronic depreciation of the Argentinian peso. These facts were stated in the Argentinian press, mid-September, further to statements by the President of the Tomate 2000 association Guillermo Quiroga, who pointed out that the economic situation of the country has heavily influenced the decisions taken by processors, leading a number of the biggest companies to reduce their levels of operations. For the time being, initially intended increases in surfaces remain to be confirmed. Total surfaces dedicated to processing tomatoes in the regions of San Juan and Mendoza are expected to be between 2 300 and 2 500 hectares, with a slight increase in Mendoza and a slight drop in San Juan, but the head of the Tomate 2000 association recently underlined that planting operations needed to finish before any final data could be confirmed.

In any case, given that the weather conditions expected in 2020 are likely to be fairly dry, Quiroga reminded interested parties that water supplies would be made available despite the low rainfall levels recorded throughout the Andes, and the agricultural yields in these conditions are likely to be satisfactory, in excess of 90 tonnes per hectare. He also mentioned the importance of mechanized crops in order to prepare the planting hillocks and carry out planting operations, a factor that contributes to improving yields.
Pursuing the topic of the importance of yields and cost control, Guillermo Quiroga stated that a sharp devaluation of the Argentinian currency had occurred soon after the beginning of 2018 planting operations. He declared that the Argentinian processing industry had "already experienced last year the impact of the ARS/USD currency exchange rates, when costs had considerably changed mid-season due to the variations in rates. Yet a number of expenses are linked to the dollar. So it is an advantage that some factories have started to fix their base price in dollars." Usually, the contracts that are negotiated and signed at the beginning of the season between growers and processors include items like a base price in pesos, which is linked to the price paid during the previous season. It is only at the end of the harvest, towards the month of March the following year, that the final amount to be paid per tonne can be fixed. So an early price in dollars allows the price of raw materials delivered to factories to "follow" the evolution of expenditure, and this amounts to a substantial improvement for growers.

"Tomatoes are a more dependable alternative"
Cosme Argerich, who is head agronomist for the INTA (National Institute of Agricultural Technology) and technical adviser for Tomate 2000, has confirmed the increase in planted surfaces, while observing that it is still too early to conclude how much of an effect this will have on the crop. Regarding the reasons for this increase, Argerich declared that processing tomatoes are considered as a satisfactory option for growers. A number of them feel that processing tomatoes provide better sales guarantees and lend themselves suitably to the mechanization of operations, from planting to harvest, thereby freeing growers from a large part of the constraints and inconveniences linked to managing teams of agricultural workers. Alternative crops that are liable to compete with tomatoes (onions, garlic or squash), being annual crops like tomatoes, are very vulnerable to market fluctuations, both nationally and internationally.
On the contrary, processing tomatoes have become an increasingly "predictable" crop, since a number of companies have agreed to fix a price for raw materials in dollars, largely because demand is chronically higher than the country's production capacity. The Argentinian industry is still struggling to supply the needs of its domestic market. The relative strength of the US currency is a decisive factor that pushes processors to either choose local production or, on the contrary, as has been the case in recent years, to consider that it is more profitable to import tomato paste from abroad.

Furthermore, at the end of August, the Alco-Canale sale was finalized, involving the biggest fruit and vegetable canning plant in Mendoza, for an amount close on USD 6.5 million, and this contributed to the involvement of a number of growers, causing the increase in crop forecasts. José Morales, who owns AVA and now also owns Alco-Canale, recently explained that he is hoping to regain market shares for tomato-based products using this latest brand, and thereby increase his production. Relaunching the processing plant of Tunuyán, where tomatoes are processed, then of Tupungato, where it is expected that 20 million cans of tomato products will be produced, will most likely require additional growers to join as suppliers.

Financing the crop remains difficult
Solvencia's Rodolfo Bianchetti, whose company is dedicated to manufacturing canned tomatoes, explained that a number of processing companies ended up deciding not to increase their production volumes because of a lack of financial capacity to match the investments of growers, preferring to concentrate available resources on purchasing production inputs like packaging or using them for other types of products. Indeed, processors usually plan at the beginning of the year what volumes of tomatoes they want to process. On the basis of that decision, they finance part of the operations of the growers who supply their factories but do not have access to bank credit. In this way, approximately half of the agricultural operational costs are temporarily covered by the processor.
According to Bianchetti, even if some operators have no other choice than to call on the banking system despite relatively high interest rates, most growers choose to use financing that comes from within the industry, which leads to a reduction in available resources. Finally, the risks in the event of a bad harvest (inclement weather, diseases, infestations, etc.) are greater with this system where operators advance part of the agricultural production costs with no real guarantee of a return on their investment, with the result that several companies have decided to lower the risk by reducing the quantities involved.

What about self-sufficiency?
Bianchetti insists on the fact that Argentina is not yet self-sufficient, as some 600 000 to 700 000 tonnes of tomatoes are consumed in the form of industrially processed products, whereas only 400 000 tonnes are harvested and processed within the country. The rest is mostly imported from Chile (paste), from Italy (canned tomatoes), and from Chile or Brazil (sauces). Contrary to the currently held opinion, China has never really massively exported to Argentina: over the past 20 years, its accumulated performances (57 000 mT) hardly even exceed those of Brazil (35 000 mT) and are far behind Chile's performance (250 000 mT). 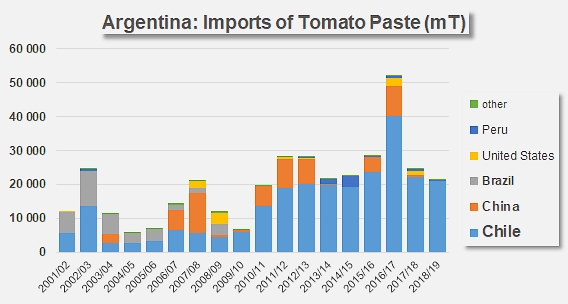 According to the latest official report prepared by the National Food Directorate for this sector, "the Argentinian production accounted for 68% of demand in 2017, which amounted to approximately 700 000 tonnes." For Juan Pizzo, Director of the AgroAndina plant at La Rioja, the country's industry is lacking some 3 000 hectares of tomato crops.

The head of Solvencia estimates that the missing 200 000 tonnes could be supplied by Argentinian agriculture if there was adequate coordination between growers and processors, and if the industry received some support. For him, although international standards have been met in terms of crops and production, this shortfall can be attributed to exporting countries, "where the banks finance growers and the State provides subsidies for export operators, whereas Argentinian processors themselves must support their growers and face competition from products that are subsidized in other areas of the world."
"What needs to be seen is how the industry could be financed so that we could progress to the point of supplying our own markets. Currently, there is a certain threshold that we cannot get past because we are lacking the financial resources," declared Rodolfo Bianchetti.

Some complementary data
One of the fundamental features of the Argentinean market is the value of the country's currency. The exchange rate of the Argentinian peso against the US dollar directly conditions the capacity and interest of local industry in producing and processing tomatoes within the country's borders or importing from abroad the tomato pastes and other products that are required to satisfy domestic demand. 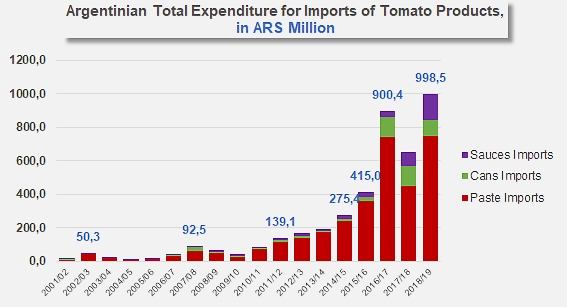 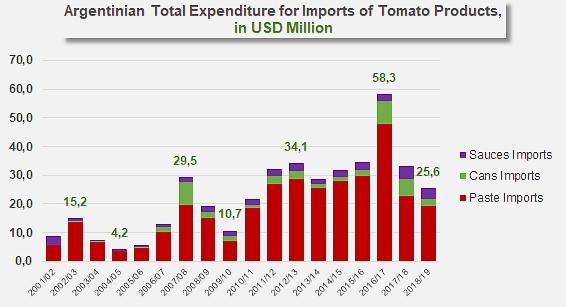 Closing soon: Call for papers for the 16th ISHS Symposium on the Processing Tomato