30/11/2021 - François-Xavier Branthôme - Lire en français
Based on processing data provided by the Algerian industry itself, combined with customs statistics of countries that have supplied the Algerian market in tomato products – particularly pastes – over the past two decades, it seems that Algeria has drastically reduced its foreign purchases in recent years, to the point of almost completely canceling paste imports in 2019/2020 and 2020/2021.
Being the consequence of a national development policy conducted over several years, this new position was commented on by the Deputy Director for Development of plant-based industrial operations with the Algerian Ministry of Agriculture and Rural Development, Mr. Amokrane Hadj Saida, who recently explained that "the processing tomato sector has reported ‘record performances’ in recent years, including during the last harvest season, which resulted in a national production of over 23 million quintals" (2.3 million metric tonnes). As for the processing figures of the WPTC, they indicate a 2021 production of approximately 820,000 tonnes, suggesting that a significant proportion of the quantities grown is directed to the fresh market.
According to local sources, the 2021 season’s results demonstrate “growth of more than 17% compared to the previous year (19 million quintals), which has allowed Algeria to ensure its self-sufficiency in terms of double- and triple-concentrated tomato paste.” 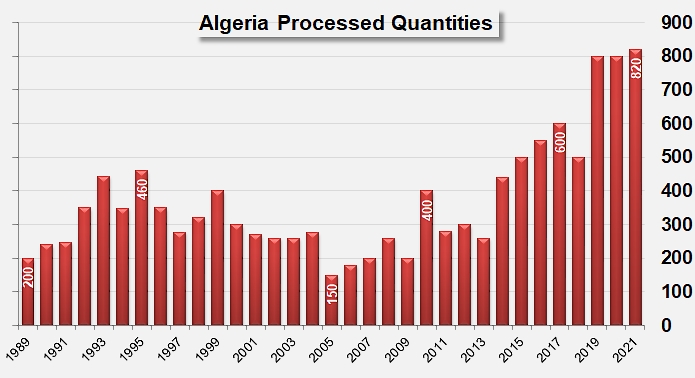 Evolution of the quantities processed by the Algerian sector over the last thirty years.
The representative of the Ministry also mentioned “the improvement of agricultural yields that reached a maximum of 1,300 quintals/ha in Ain Defla, with a national yield that is close to 800 quintals/ha in 2021, against 500 quintals/ha in 2013.” The official noted the existence of five main production regions in Algeria, namely Skikda, El Tarf, Guelma, Annaba and Ain Defla, with the addition of a few emerging regions, such as Chlef, and he stressed that the increase in production was also the result of the extension of the surface areas planted by the industry’s operators, which have risen from 16,000 ha in 2013 to more than 26,000 ha in 2021, an increase of nearly 38.5%.

According to Mr. Hadj Saida, these results were achieved "despite the drought and the fallout of the Covid-19 pandemic", and thanks to support measures and advice provided by the Ministry in terms of the acquisition of specific machinery and irrigation equipment, as well as the accelerated settlement of premiums for production.
The official also highlighted the creation of an interbranch council for the tomato processing industry at the level of each wilaya, composed of growers, processors and major stakeholders in the sector, and considered as a “consultation body”. 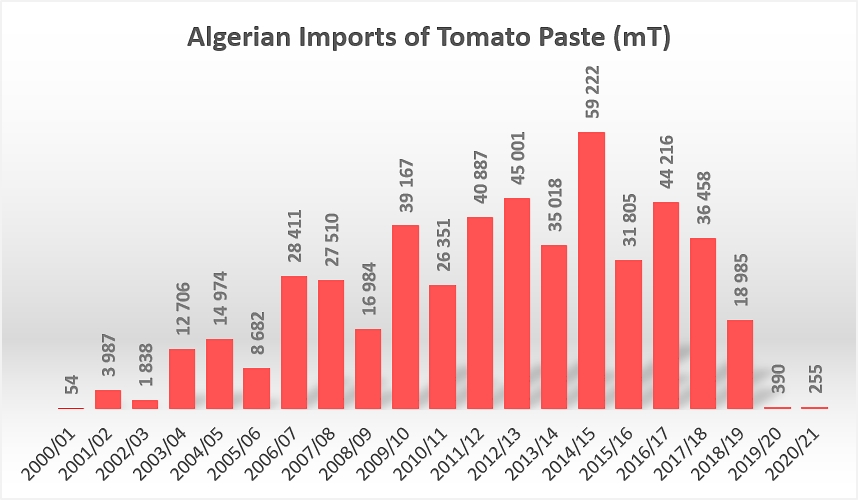 Mr. Hadj Saida commented on the "soaring" production of double- and triple-concentrated tomato paste, "which respectively increased from 20,000 tonnes in 2018 to more than 80,000 tonnes in 2021, and from 9,000 tonnes in 2013 to more than 70,000 tonnes last season." He also confirmed that after reducing its imports since 2018, Algeria has stopped buying pastes of foreign origin altogether since 2020, wiping out an annual currency expenditure that may have reached USD 67 million at times (see additional information at the end of this article).

Official customs statistics do seem to indicate a drying-up of Algerian imports of tomato paste. According to Trade Data Monitor figures, foreign purchases may have risen, in 2014/2025, to around 60,000 mT of finished products (imported mainly from China) before slowing down sharply. The last significant imports would have amounted to about 19,000 mT, in 2018/2019. 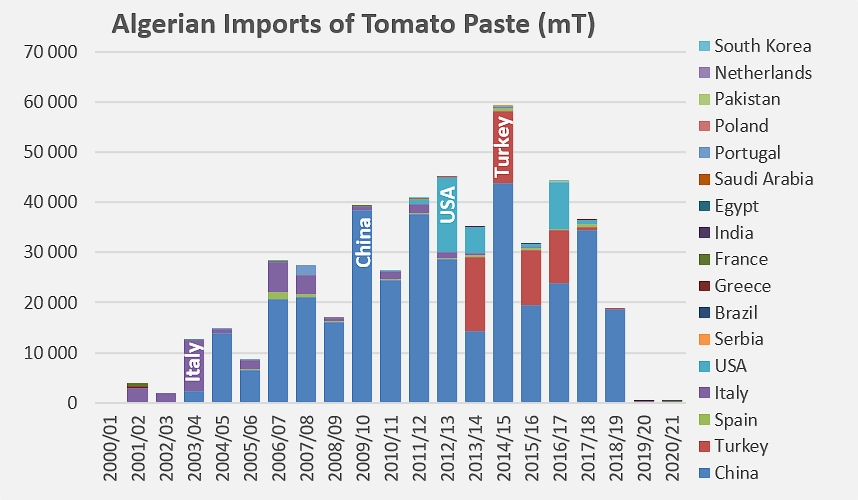 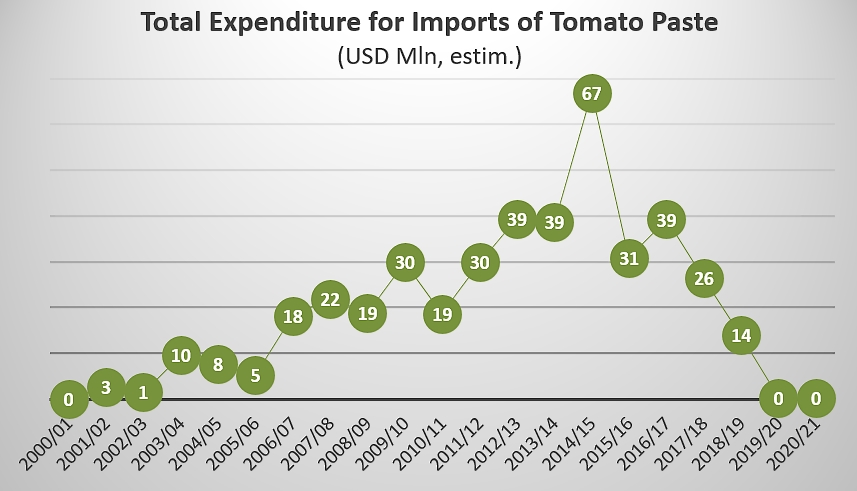 Algeria: will there be a ban on importing triple-concentrated tomato paste?