The 2022 industrial tomato season kicked off in Northern Italy with the collection and delivery to processing plants of the “small” tomato production and the first quantities of early “round” varieties. The hectares cultivated in the regions of Northern Italy for the current year total 37,024 hectares, down by 4% compared to last year, especially in the provinces of western Emilia, but higher than the average cultivated area of ??the last five years. The surfaces of organic tomatoes reach 11% of the total surfaces, consolidating and increasing the trend of recent years.

The President of OI Pomodoro Nord Italy, Tiberio Rabboni, declares: "The latest survey on the areas cultivated this year with tomatoes in Northern Italy, 37,024 hectares, represent an increase above the average of the last five years but down by 4% on the last year, confirming the irreplaceable function of production planning in guaranteeing certainty, reciprocity and advantages. If in a situation of great uncertainty, despite the surge in the market prices of some potentially competing agricultural products on the international markets, almost all producers confirm the choice of tomatoes, it means that the organized supply chain and shared production planning are true value added, recognized and practiced ".
“The main concern of the operators - continues Rabboni - is, however, the current drought and the availability of irrigation. The need for water will reach its peak in the next few days, until the end of August. The large reservoirs and territorial dams have long since declared a condition of crisis. Those who can will use wells. The situation is extremely worrying. We must do everything possible to make it the last year of powerlessness in the face of drought. Meanwhile, the PNRR and the National Irrigation Plan, in collaboration with the Consortium of Reclamation, have allocated important resources to increasing the availability of irrigation in the territories. It is not all that is needed, but it is already something ”. 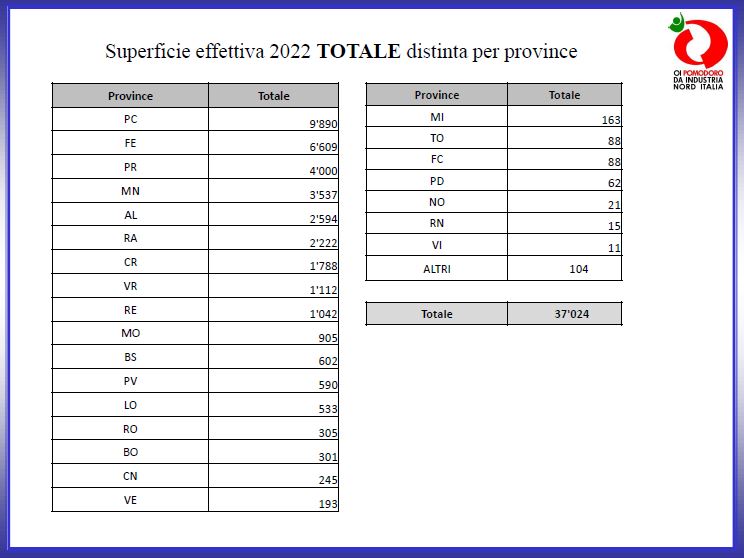 The subdivision of the actual surfaces in the provinces of the Northern Italy basin always sees Piacenza in the lead, with 9,890 hectares planted with tomatoes. Following  are Ferrara with 6,609 hectares; Parma with 4,000; Mantua with 3,537; Alessandria with 2,594; Cremona with 1,788; Verona with 1,112; Reggio with 1,042 and Modena with 905. The other provinces follow with more contained values. 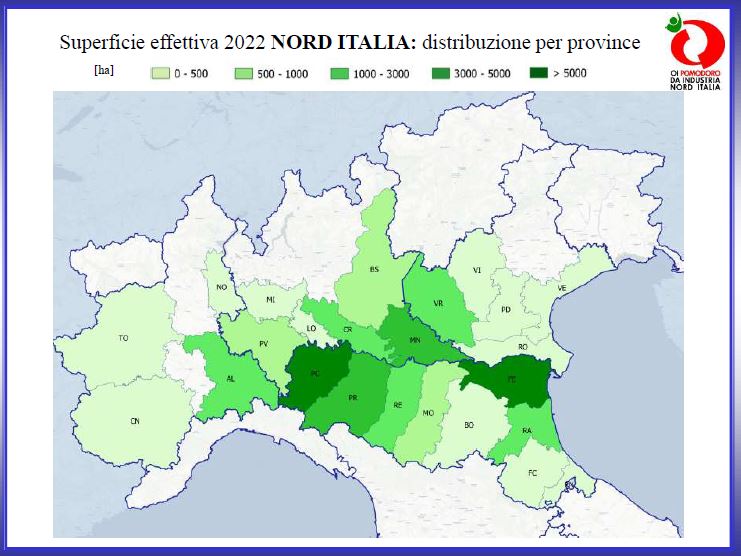 Looking at organic farming, Ferrara is the province with the most hectares (2,484). Followed by Ravenna with 636 hectares and Parma with 246.
The breakdown by region sees Emilia Romagna with more hectares planted with tomatoes (68% of the total), followed by Lombardy (19%), Piedmont (8%) and Veneto (5%). 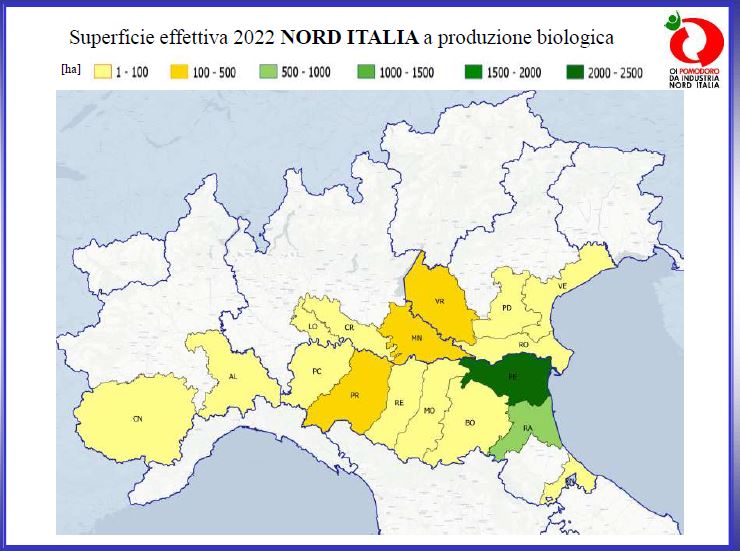