As of May 15, California’s tomato processors reported they have or will have contracts for 11.7 million short tons (10.6 million metric tonnes) of processing tomatoes for 2022. This production estimate is 4.1% lower than the January intentions forecast of 12.2 million sT (11.070 million mT), but 8.9% above the final 2021 contracted production total. The May contracted acreage of 234,000 (94,700 hectares) is 4.5% below the January intentions forecast of 245,000 acres, but 5,000 acres more than last year’s final contracted acreage.
Fresno County remained the top California County in contracted planted acreage for 2022 with 50,000 acres. Yolo, Kings, Merced, and San Joaquin made up the remaining top five counties, accounting for 69.2% percent of the 2022 total contracted planted acreage for California.

Despite low supply and a substantial increase in price, contracted production has dropped significantly compared to the beginning of 2022. Water availability is the main issue facing processing tomato producers, challenged by another year of lower-than-average rainfall and little to no water allocations.
There were a few days of record high temperatures in March, followed by an unexpected freeze in April that hit the northern and central parts of the state. These unusual weather events damaged early plantings in the affected areas. At this point in the season, yield is still projected to be higher than last year, but hot temperatures during the summer months could impact the crop development.
This early processing tomato estimate is funded by the California League of Food Producers. 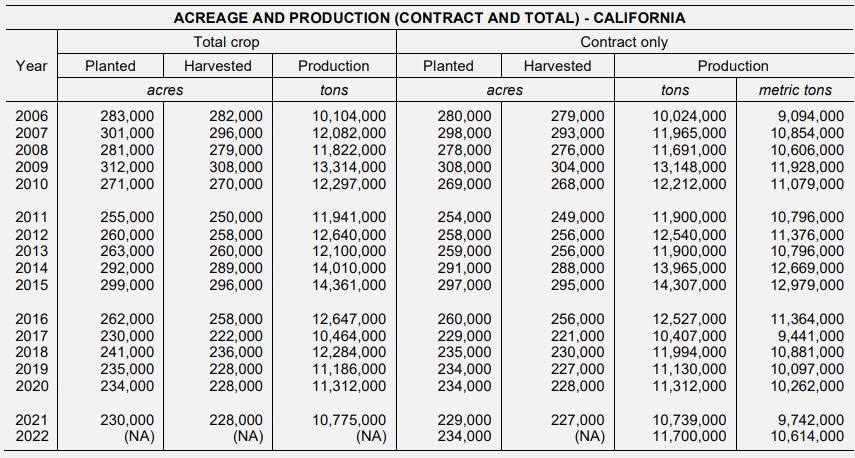