New information and calculations have been carried out in recent weeks – particularly in southern Italy and California – regarding harvest volumes in 2020, especially farm-gate prices for processing tomatoes as a raw material.
In Italy, an agreement has been reached for a raw material reference price of EUR 105 mT. In California, the CTGA signed an agreement with five processors (Campbell, Los Gatos, ConAgra, Stanislaus and Del Monte), which account for around 2.5 million tonnes, at the price of USD 80 /sT (or just over USD 88 /mT or EUR 76 /mT). Finally, the EUR/USD exchange rate has recorded a significant variation since our last statement on this topic at the beginning of July: the value of the US dollar depreciated significantly against the European currency during the first weeks of the season, from USD 1.12 for EUR 1 on 9 July 2020 to USD 1.19 for EUR 1 on 9 August 2020.
All these considerations combine to profoundly modify the global raw material average valuation that we presented in an early appreciation during the very first days of July, leading to an even more marked increase in the reference price level of processing tomatoes this year. Assuming that the partial agreement concluded in California at the beginning of August is representative of the US level of remuneration for tomatoes in 2020, the overall average (weighted) price for processing tomatoes grown this season is approximately USD 87 /mT, up by about 5% compared to the level recorded in 2019 (USD 83 /mT) and by more than 6% compared to the average level of the three previous seasons (close to USD 82.5 /mT).

In the current state of the EUR/USD exchange rate, the average reference price for the five European processing countries (approximately EUR 85 /mT) is roughly equivalent to USD 99 /mT, i.e. a competitiveness differential of more than 12% in favor of Californian products. Likewise, in a superficial comparison between China and California, the competitive advantage linked to the price of the raw materials alone is just under 30% to the benefit of Chinese products. 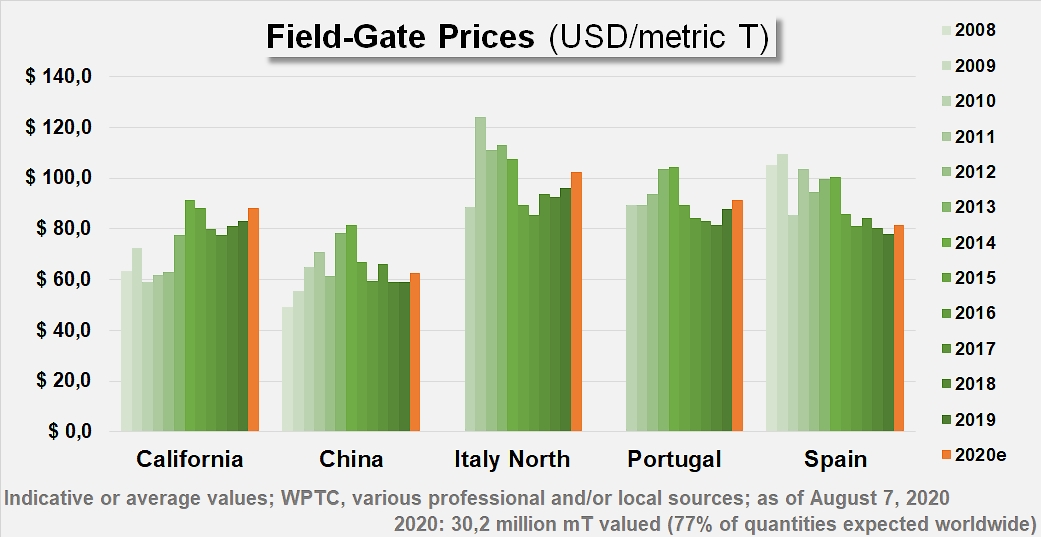 Taking into account these recent considerations, the total value of the worldwide harvest in 2020 can be estimated at around USD 3.4 billion or EUR 2.95 billion, a notable increase (14%, in US dollars) compared to the average value of the three previous harvests (2017, 2018 and 2019). 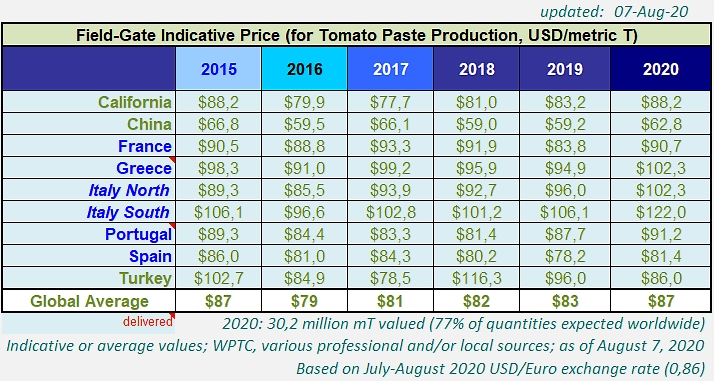