2018: a slight increase in this year's prices

19/09/2018 - François-Xavier Branthôme - 2018 Season - Lire en français
The 2018 season may go down in history for its exceptionally low results and for the deplorable weather conditions that affected operations throughout, but most likely also for the exceptional and unprecedented length of Californian negotiations regarding prices for raw materials. Rarely have discussions about such a basic feature as relationships between growers and processors been prolonged so late into the season. Rarely has an indication as decisive for the strategy of the other major worldwide tomato processing industries remained undecided for so long.
During the first half of this month of September, the processing tomato harvest is drawing to a close (and in some cases has already ended) in several of the most important regions or countries for the industry worldwide. Volumes already processed at the time of writing this article most likely amount to slightly more than 83% of California's harvest forecasts for 2018 (10.7 million tonnes). Yet Californian companies who have "already" signed price agreement with their growers only account for approximately 40% of the volumes expected this year in what is the biggest processing country of the world. According to professional sources, the reference price negotiated since February and agreed with several operators (including Los Gatos, Ingomar, Campbell, etc., for approximately 4 million tonnes) has been fixed at about USD 73.55 /sT. Important volumes remain as yet undetermined, while sources close to industrial operators estimate that the reference price could be slightly lower than what has already been agreed. For local observers, the average Californian reference level should therefore turn out to be close on USD 73-73.5 /sT. This price, which does not by definition take account of late-season incentives, which have been part of the Californian contractual "scenery" for many years in the processing tomato sector, reportedly corresponds to an increase of close on 4% compared to last season's price (USD 70.5 /sT).

Given the importance of California's production in the worldwide processing tomato context, this increase, despite being limited, will undoubtedly have a noticeable impact on the average worldwide price level (in USD/mT) of raw materials in 2018. Based on the volumes exported as of 31 August 2018 and the known or estimated values for the main processing countries (California, Italy, China, Spain, Portugal, Turkey, Tunisia, Brazil, etc.), the weighted worldwide base price amounts in 2018 to approximately USD 82 /mT, which is an increase of slightly more than 1% compared to the reference level of 2017 (USD 81 /mT).

This increase in value for Californian processing tomatoes is an exception given the other relatively measured downward variations recorded: this is the case of different national currencies, in China (-2%), in Spain (-3%), in Portugal (-1%), in Greece (-2%), in Poland; while reference prices have remained relatively stable in both Italy and France. Turkey's situation is particular: a major shortfall, the consequence of tomato growers shifting their production to other products following the Russian embargo and damage caused by infestations of Tuta absoluta, have hit the table tomato market and resulted in a staggering price increase on the free market, which therefore became very attractive, including for processing tomato growers. Whereas contract prices for processing tomatoes were fixed at between TRL 350 /tonne (EUR 46/mT) and TRL 400/tonne (EUR 53/mT), tomatoes on the free market have sometimes been negotiated at up to TRL 800 /tonne (EUR 106/mT). 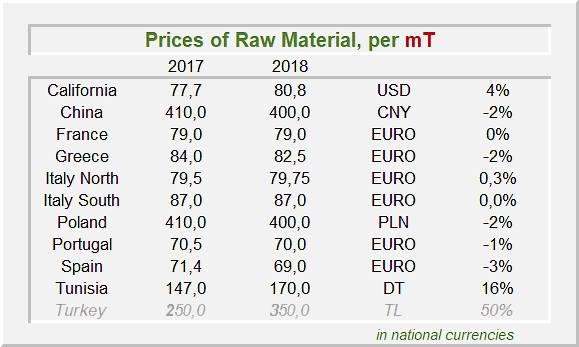 The slight downward variations recorded in Europe are probably the sign of a generally cautious attitude of operators (possibly a "wait-and-see" approach), who are dealing with a hesitant market in a very uncertain political and commercial context. Whereas a lot of observers are concerned about the face-off between the United States and China, and the results of the negotiations between the USA, Canada and Mexico regarding trade agreements, recent evolutions in the exchange rate between the US dollar and currencies of the main competing regions for processing tomatoes have actually been fairly favorable to non-US countries (see chart at the end of this article). With a slight increase in the US dollar in recent weeks, price variations for raw tomatoes (expressed in USD to facilitate comparison) have been noticeably accentuated (-11% for raw tomatoes in China, -4.9% for Spanish raw materials, -2.4% in Portugal, -1.5% approximately for Italy as a whole, -3.4% for processing tomatoes in Greece, etc.), a fact that gives the tomato sector in these countries a slight advantage in terms of competitiveness. Excluding California, the average price of processing tomatoes throughout the rest of the world has dropped by slightly less than 2% compared to last year.

This does not mean that processors in the rest of the world are buying their raw materials this year at a price that is lower than the price paid for Californian tomatoes. In this respect, tomatoes in China remain far cheaper than in Europe or America, despite the pressure applied by the Chinese agricultural upstream sector on the country's processing companies. With a base price varying between CNY 390 and 410 depending on the different production regions (South Xinjiang, Inner Mongolia, North Xinjiang and Gansu), or approximately USD 59 /mT for the 2018 season, one metric tonne of Chinese tomatoes "costs" on average USD 22 less than the same tonne grown in California (approximately USD 81 /mT) and USD 31 less than a tonne harvested in the European Union (EU5) (approximately USD 90 /mT). The average level of payments for raw materials in the 12 biggest processing countries in 2018 amounts to about USD 82.5 /mT, which is a slight progression (approximately 1%) compared to last season.

See also our article dedicated to the prices of the 2017 crop “2017: Notable drop in prices”
Back