2017 season: the price of raw materials

28/06/2017 - François-Xavier Branthôme - 2017 Season - Lire en français
The global average price for 2017 is virtually identical to what it was in 2016
With the agreement reached on 9 June, the tomato industry of south-central Italy was the last one to finalize its negotiations for the price of raw tomatoes grown in 2017.
On the basis of the volumes and prices recorded by the WPTC, 3.6 million mT of tomatoes are now expected to be processed this year, with known reference prices for 2017 – indicative values that are probably different from the prices that will actually be paid for tomatoes delivered to factories, as these will depend on payment modalities, including specific agreements with different companies, grading result adjustments, and in some cases, premiums for early or late season crops, etc.
These average prices for raw materials have been determined in the vast majority of the countries operating at the worldwide level, particularly on the paste market: the conclusion of negotiations and the slight depreciation of the US dollar against the euro in recent weeks have brought some changes to the clear downward trend (USD 74 /mT environ) observed in the data published last April.

Decreases observed for the third consecutive year
For the third year in a row, the overall trend for the price of raw materials has followed a downward slope. According to estimations on 15 June, the overall average value of processing tomatoes for 2017 is actually very close, though slightly down, on what it was in 2016, at USD 78.5 /mT (against USD 79 /mT last year). This level is representative of the situation in fifteen of the world's biggest paste producing countries, but is among the lowest of the past ten years. So it clearly illustrates the intention of the world's main industries to control the progression of prices this year, if not obtain a drop in prices.

There are several objectives to this approach. Firstly, it is intended to encourage the agricultural upstream sector to reduce the quantities for processing, in order to avoid further compounding the inventories situation, which is already difficult. Secondly, it is intended to lower the proportion of the cost of raw materials against total production costs. Additionally, it aims to increase competitiveness without increasing the volumes processed, in a context that continues to see intense competition on a global market with very few expansion prospects. Finally, it is hoped that this springtime will see the end of any potential desire to increase tomato tonnage, which would clearly lead in 2018 to uncontrolled prices for raw materials from the 2017 crop. 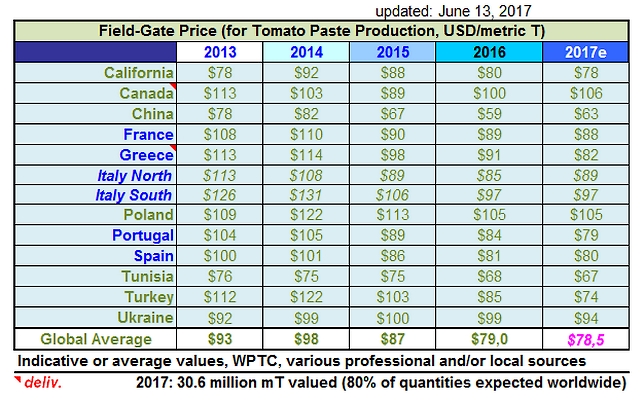 Some complementary data
Comparative shifts in indicative average prices for raw materials for the five processing countries of the EU, for the Top12 paste producing countries, for California and for China.