2017: Notable drop in prices this season

Convergence is an increasingly obvious fact...
Over the past ten years, from 2008 to 2017 (estimations February-March 2017), the price differences for raw materials across the main processing regions have narrowed considerably. The gap between the highest and lowest price levels at the worldwide level, which reached USD 60 /mT in 2008 and allowed the Chinese industry to rise above other players for several years by implementing a very aggressive price policy, has dropped to approximately USD 25 /mT in recent years. This gap could shrink further this year, to the point of falling to only USD 15 or 16 /mT approximately. 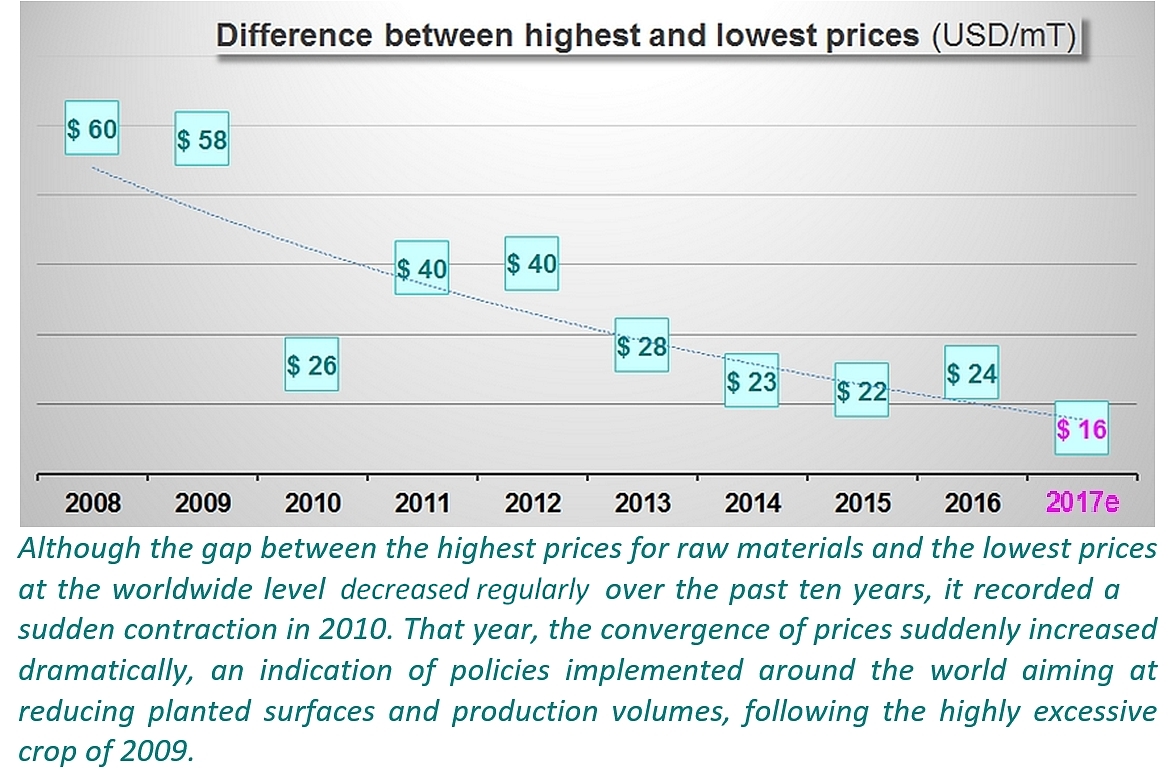 The price of raw materials is a crucial feature of the profitability of processing operations and the core condition for competitiveness in distributing products, particularly for companies that are involved in worldwide marketing. Most of these companies are set up in about twelve countries, which concentrate most of the worldwide production and export operations. Each year, the publication of raw tomato prices – by contractual agreement between growers (often represented by POs) and processors – takes on a strategic importance, as it conditions the final prices of industrially processed products, particularly concentrated purées, and therefore defines the positioning of each company with regard to its competitors at the national level, of each country within the different geographic production regions, and of each production region with regard to other competitors at the global level.

The data collected by the World Processing Tomato Council, based on information provided by each national delegation, indicates that the overall average price level (weighted) for raw tomato over the past ten years has evolved in a coherent fashion within the three main processing regions (USA, EU, China), between a base-level that is most often determined by annual values for Chinese tomato products and a ceiling-level that is materialized by the values for European raw materials, and generally remained close to an average value from which the Californian tomato industry rarely strays.

Over this period, except for the 2010 "incident", the average worldwide value of raw tomatoes started by climbing, whilst being more or less affected by worldwide trade patterns. This growth reached its peak in 2014, under the joint effect of the price rises observed particularly in California and in China, which brought these prices more in line with those found in Europe. 2014 saw the start of a repositioning on the part of the Californian industry, which was affected by the increase in the value of the US dollar compared to all of its competitors and by the efforts being made to reduce the pressure of inventories. This approach carried on for the following years, with a consequential mechanical decrease of price levels in the main processing regions, which were then accentuated by local dynamics due to operators trying to be more competitive. 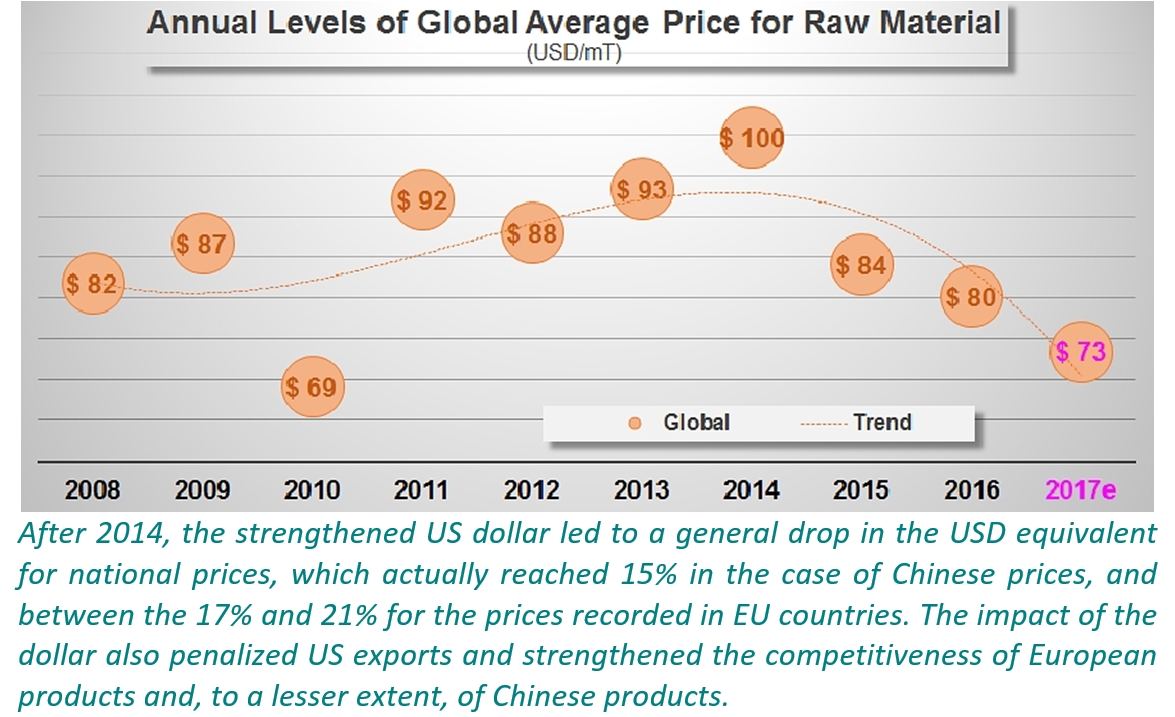 The consequence of the shift in exchange rates between the US dollar and the currencies of other major processing nations, together with a general contextual decrease all of prices for processing tomatoes, brought the global average value of raw materials "down" to approximately USD 85 /mT (even USD 80) in 2015 and 2016. Given the currently available information, it is not impossible that this shift should be further accentuated this year, with an average value of about USD 73.5 /mT (indicative values as of 15 March 2017, based on approximately 65% of the volumes expected for processing in 2017).

However, all of the industries – and even more so the companies involved – have not been affected by this convergence in the same way, insofar as it is clear that the leveling out of prices for processing tomatoes has been carried out by lowering the highest levels, obliging European operators – who are used to higher values – to accept bigger adjustments than their competitors. Part of the gain in competitiveness has been the mechanical result of variations in the EUR/USD exchange rate, but sometimes drastic reviews of contractual prices have occasionally been necessary in order to support new strategic policies. In this area, if the coming weeks confirm the WPTC's early indications, Spain has been the most effective and demanding operator of the past few years, with valuations for raw materials (expressed in US dollars) that have dropped by almost 20% between 2008-2010 and 2015-2017 (-1% approximately in euros). The progression is fairly comparable in northern Italy, with a drop of approximately 19% in the values expressed in USD for the same period (-3% approximately in euros) and, to a lesser extent, in Greece.
In the end, as far as current information indicates, the average European values (weighted) for the 2017 season seem to be at approximately EUR 73.5 /mT, a level that is 5 euros (6.5%) less than in 2009. This is the fourth consecutive year to record a drop at the European level. Over the past two years (2015 and 2016), one tonne of processing tomato has cost European operators on average EUR 77.5 field gate, a level that is very close to USD 86.3 /mT and that gives a clear indication of the impact of the stronger dollar on European competitiveness in recent years. Indeed, this value has dropped by close on USD 25 /mT (-22% !) compared to the value of a tonne of tomato in 2008/2009, which was estimated at approximately USD 111.

Over the same ten year period, the evolution of the value of Chinese raw materials has been noticeably different, although the dollar effect (-6% for the period running 2014-2016) has had an impact on Chinese dynamics that is similar to the impact observed in Europe, although to a lesser degree. The approach of the Chinese industry involves two parallel principles that seem fairly contradictory, involving both an increase in the price of raw tomatoes (in yuan (CNY)) and a decrease in the volumes processed each year. As from 2015, this country's industry benefited from the weakening of the yuan against the US dollar, which led to lower value levels for its raw materials, taking them to approximately CNY 500 /mT (about USD 83) in 2014, before returning to approximately CNY 400 /mT (USD 63) in recent years.
In the final count, whereas European industries lowered their prices by 22% for tomatoes delivered to factories between 2008/2009 and 2015/2016, the Chinese industry increased its prices by 13% (from CNY 360 /mT to CNY 408 /mT).

Overall, these dynamics, which are unavoidable on a worldwide level insofar as they determine the volume of global processing and condition the relative competitiveness of the world's three main processing regions, have seen a shift in the evolution of prices for raw materials over the past ten years that is both convergent and decreasing. This trend does not of course provide an indication of specific local situations or of the large gaps that can still exist between companies, whether they operate in regions that can be very far apart or actually do their business in regions that share similar crop conditions, as is often the case.
However, this year, this trend underlines the issue of the limitations of agricultural and industrial collaborators for each industry as they need to find appropriate joint responses to the current difficulties and challenges of improving each year the competitiveness of their products, in a context that is clearly extremely competitive at the moment. This approach must also maintain and possibly increase the level of demands and constraints (in terms of quality, health, economy, environment, social parameters, etc.) that define their products and their identity.

It also raises the issue of the relevance of a constant race towards increased competitiveness, though in a purely theoretical way. Finally, it raises the more practical issue of knowing whether the price differences for raw materials, which are now so small, continue to be decisive factors in terms of competitiveness. The answer to this question is no doubt "yes", if only because the values published are the result of a negotiated process that can only be partly objective, given that they remain anterior to a number of parameters that determine the outcome of the processing season, and given the fact that they do not take account of the extreme diversity of contexts and conditions of the industry, which is spread throughout the world and which includes several thousand farms and companies, of all sizes, and with a wide diversity of end-destinations.
That said, it is obvious that this narrowing of price differences has already "reshuffled the deck of cards" for international trade in recent years. If this trend continues in the long term, it could lead to changes that separate competitiveness from the single issue of the price for finished products. A number of questions remain to be asked: In order to stand out in the future, will processors need to be more focused on quality? On services provided? On the origin of products? On authenticity? On originality? On "health" features?

Some complementary data
Evolution of the estimated price of raw materials in the main processing countries.

Evolution of the annual global price (in USD) and of processed volumes (in thousands of tonnes).