07/09/2020 - WPTC , François-Xavier Branthôme - 2020 Season - Lire en français
Impacted by weather conditions, global forecasts reduced by 1 million tonnes
Processing prospects have become clearer as the harvest season progresses. Having remained unchanged for a long time at around 39 million metric tonnes, figures for the volumes of tomatoes to be processed this year have become increasingly accurate in recent weeks as several more or less significant revisions have been made. Among those which considerably alter the level of global operations, brief mention should be made of the reduction in prospects for the Californian industry (-544 000 mT) announced on 28 August by the USDA, which is echoed by adjustments made in Spain (-150 000 mT), in Portugal (-100 000 mT) and in Iran (-350 000 mT), the total of which lowers forecasts for the Mediterranean region by around 500 000 mT. In addition to these changes, adjustments have been made to the Chinese forecasts, which are reduced by 100 000 mT. Finally, despite the adverse conditions which are also affecting Italy, it should be noted that this country has slightly increased its forecasts by +100 000 mT. 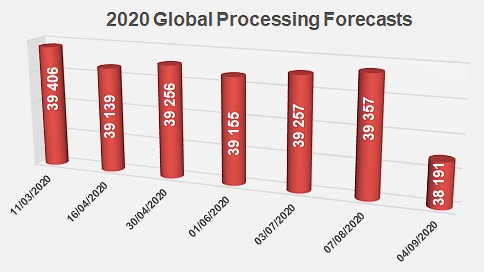 A number of other countries in the Northern Hemisphere have also modified their forecasts, though to a lesser extent, with total global processing prospects recorded at 38.19 million mT as of 4 September 2020, which is an increase of 800 000 mT (+2%) as things stand, compared to the results of the 2019 season, and a decrease of 2 to 3% compared to the initial forecasts at the start of the year. 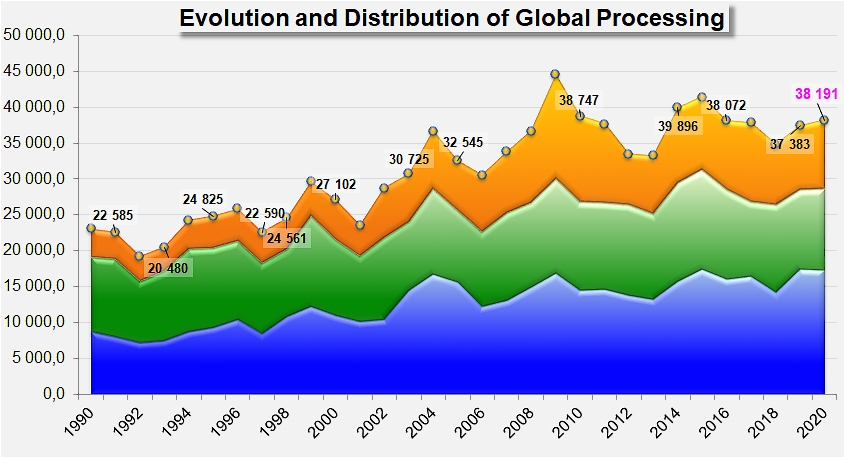 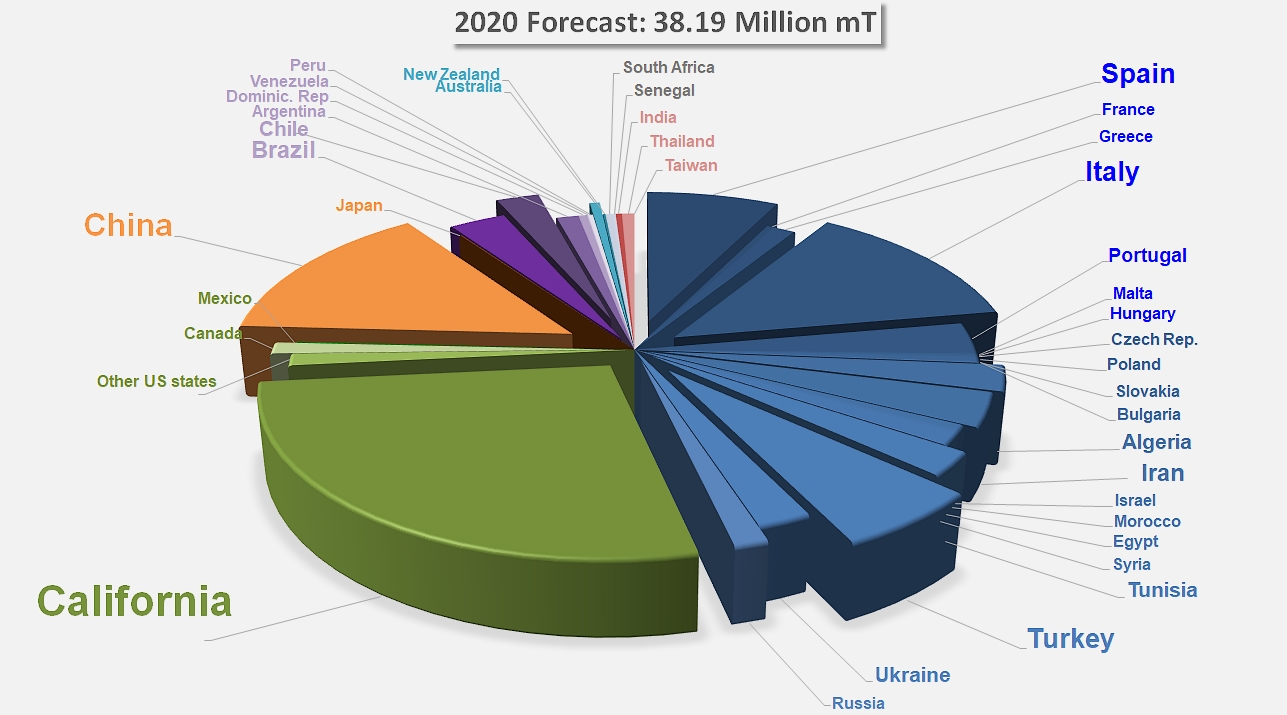 Other countries
In South Africa, the estimate for the total tomato production remains the same at 140,000 tonnes for the 2020 season.
In China, at present, 78 companies have started processing. On August 29, the northern part of Xinjiang stopped processing due to rainfall, but processing resumed this week. On August 30, China's Inner Mongolia stopped processing due to rainfall and on September 1st, some towns were affected by hail; the disaster losses are still under investigation. To date, the rainfall in China's tomato planting areas is more than that of the previous year. According to the medium and long-term forecast of China Weather, there will still be precipitation in Xinjiang in the future, which is expected to have a certain impact on production. So far, China has completed 45% of the processing volume. The forecast is adjusted to 5.5 million tonnes, but the overall production will be clearer in the next 15 days. It will not be lower than last year (4.6 million tonnes).
In Japan, the total harvest may decrease to about 25,000 tonnes due to long rain and the lack of sunlight in July.
In California, the estimate is to process 1,017,511 short tons (923,070 metric tonnes) this week. At the end of this week (week ending 5 September) we will have processed 7,126,195 short tons (6,464,775 metric tonnes). Over the next 3-4 days California will experience another heat spell throughout the state. As we have reported earlier, yields in the South continue to perform below contracted levels. In the North, yields continue to perform at contract at this time. The current estimate is for 11.4 million short tons (10.34 million metric tonnes) as reported in the NASS estimate last week.
In Canada, the harvest is approximately 20% complete, with good quality reported. There were some heavy rains this past weekend but good temperatures were expected for the coming week.
In the US Midwest, production is in full gear heading into September. The crop continues to be strong as expected and maturities have continued to advance which has filled in the expected processing gaps from the planting delays in the spring. Cooler weather though is expected for the first half of September which will slow development. Harvest weather has generally been dry allowing for no delays due to weather.
In Brazil, more than 50% has been harvested to date with good yield and quality. The total volume is estimated at 1.18 million tonnes. There are no issues with climate or other external issue. 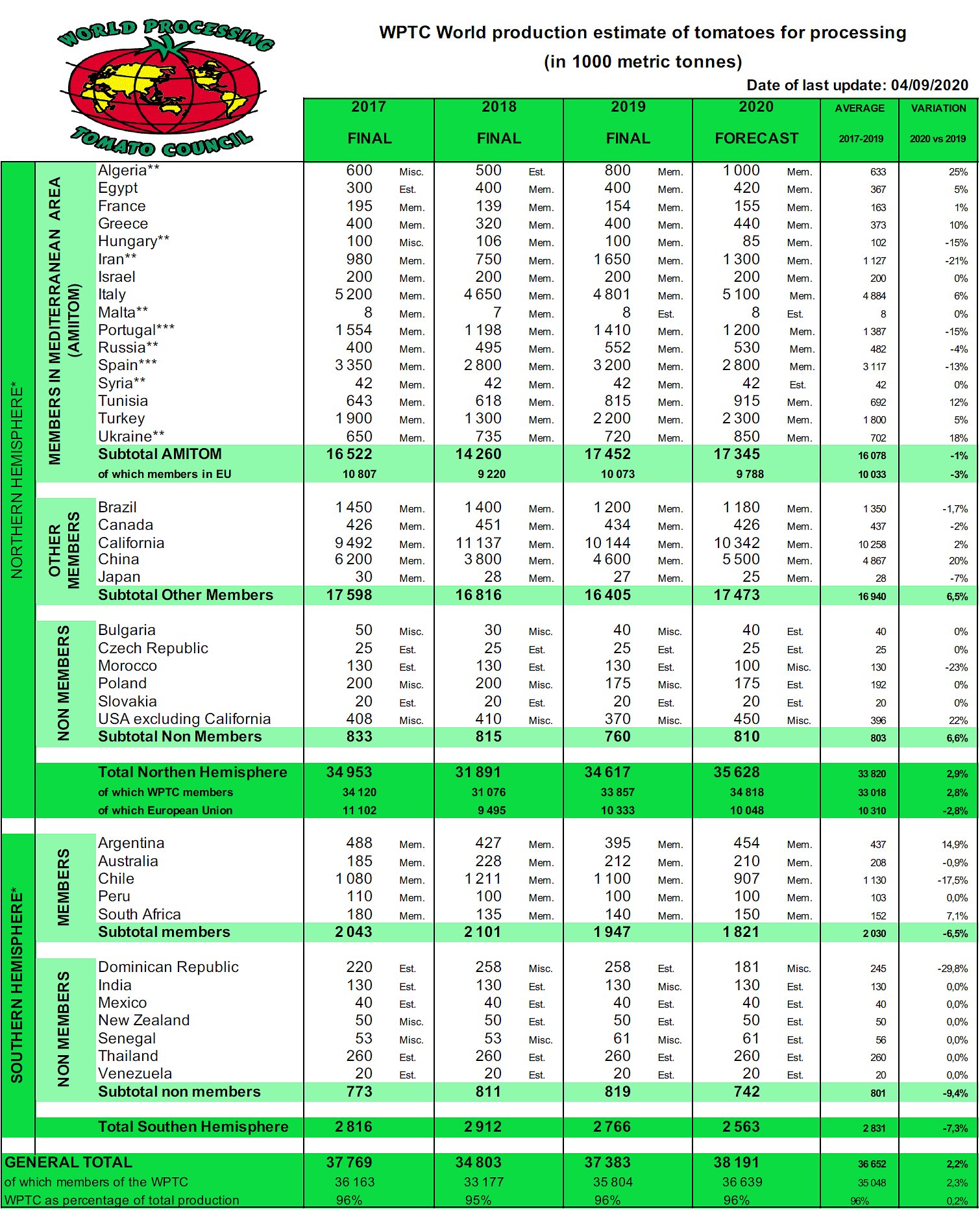